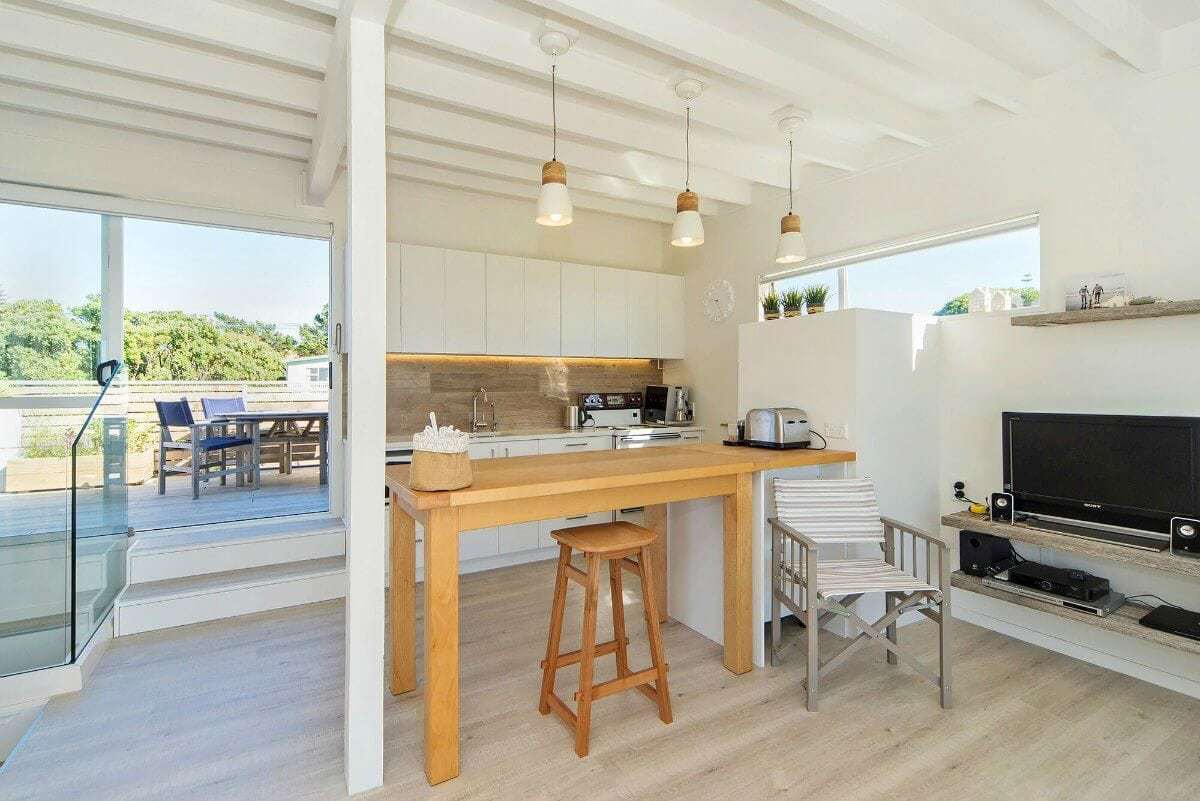 A Coastal Kitchen Renovation Completed for under $10K!

I love nothing more than a stunning room makeover, and today’s post – featuring a coastal kitchen reno – delivers just that. Read on for all the details on how TLC reader Janet Cowper created her dream kitchen in just three weeks.

Janet’s home is located in the coastal settlement of Riverside Beach, New Zealand, so it only made sense that the kitchen renovation, which was part of a whole-house transformation, took on the coastal vibe that was so prominent around the property

“I wanted to create a modern, beachy feel that reflected the sand and moodiness of the sea that we look out on to,” Janet tells me. “Using natural colours, light wood tones and materials with lots of texture was really important to how it felt”. 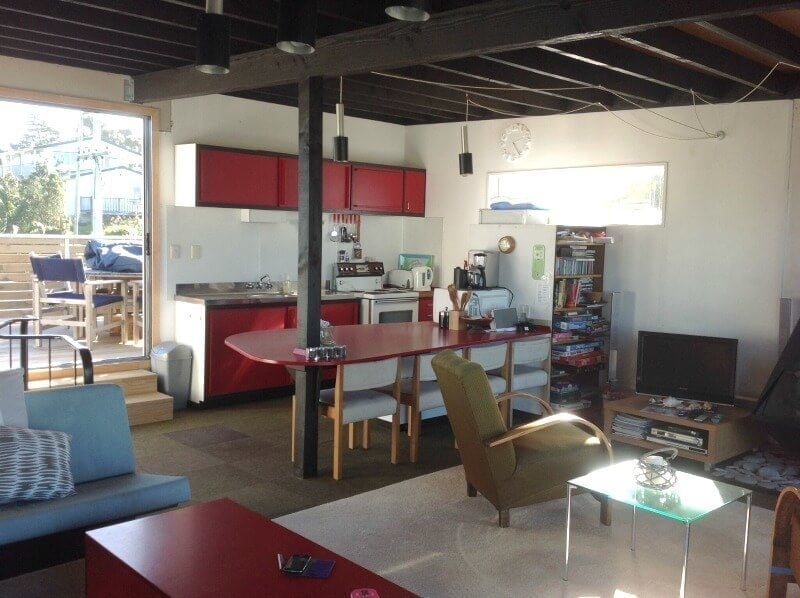 A Coastal Kitchen Reno for under $10K

Take one look at the before shots and it’s easy to see what needed changing to create the coastal aesthetic Janet longed for. The wooden beams you see on the roof were making the space feel gloomy and top-heavy. Not to mention the red benchtop, cabinetry, and the dark flooring.

It was more than just colours, though. Some of the practical, day-to-day elements weren’t working for Janet either, and needed to be corrected.

“Whilst we appreciated the nostalgic 1970’s look of the kitchen, it lacked storage and functional bench spaces.  The island bench was an unusual tear drop shape and only 600mm high, so it was very difficult to work on”.

It was out with the old and in with the new in Janet’s three-week transformation, which she and her husband completed themselves, for the most part. A lot of ground work went into the reno before any work was undertaken, too, and in the end Janet decided to keep the existing layout.

“I spent many hours drawing and redrawing the kitchen plans to come up with a layout that would give us the storage that we needed. In the end I realised the original owners had done a great job and it was the perfect layout for the space. A bonus of leaving the layout as it was, it saved on plumbing and electrical changes which we knew could be costly”.

The end result of this kitchen reno, which cost Janet and her husband just under $10,000, is a coastal kitchen that feels light, bright and airy. Of course, the transformation was about more than aesthetics; it now functions as they need it to, allowing them to also make the most of the space in the adjoining open plan living area.

“As it was such a small space there was no room for a dining table, so I designed a freestanding moveable wooden island bench that doubles as a dining table. When required the table can be moved out into the lounge for dining and then moved back to be used as a bench!”.

The warm wood tones are my favourite element in this kitchen renovation and make the space feel rich and inviting. Janet’s husband built the benches and shelving from European Beech, which creates a nice contrast to the grey wood look splash back tiles, overlay flooring and warm white walls.

Paired with the white cabinetry, which Janet got tradies in to make (along with the tiling and benchtop), the wood tones make the room feel balanced and well-resolved. Janet now has an interior that matches the stunning seaside she looks out onto.

“I can now say that all the planning and stressing was worth it,” she tells me. “I have a new appreciation for professional kitchen designers, as it is a huge job getting the function right without compromising the aesthetics. I love our kitchen and it has turned out better than I dreamed of”.

Janet’s adventures can be followed on her Instagram page here. The snaps of this divine coastal kitchen makeover were taken by the very talented photographer Jane Fletcher.

Have you completed a kitchen reno you want to share? Drop me an email via the contact page, or at tlcinteriors@gmail.com

What are you loving about this coastal kitchen reno? Drop a comment below letting Janet and I know what you adore about her home’s makeover.