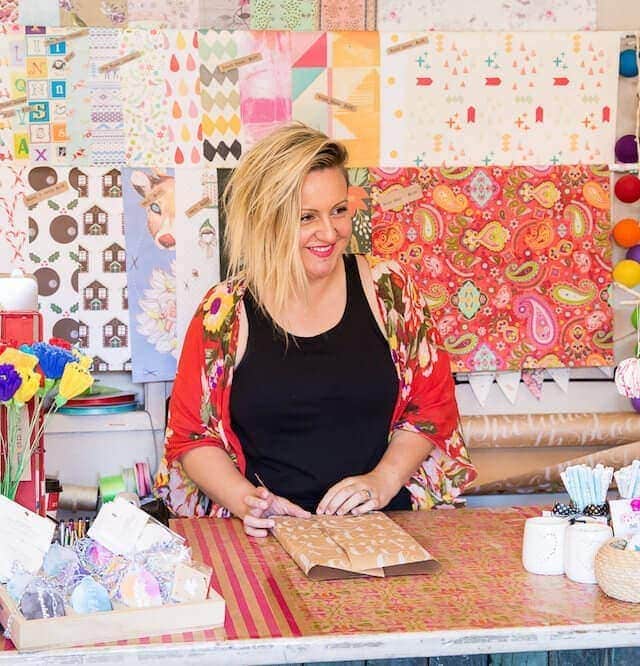 In today’s Fur-Kid post, Jayde Leeder from Little Paper Lane is giving us the lowdown on her family’s journey with their popular pup turned polar bear, Coco.

In her own words, Jayde reveals what it’s really like to own a Malamute and gives her advice to people considering getting one.

We only got to meet Coco the day we took her home.

But we’d had seen photos and videos of her and back and forth with texts and emails and phone calls. Coco came to live with us October 2013 when she was 9 weeks old. She is a purebred White Alaskan Malamute, and we had searched for her basically since my husband and I got together 11 years ago.

Our breeder is quite far away from us, and the wait was so hard but so crucial.

Good breeders don’t breed 10 times. They only breed a few times, so there are limited times when a puppy comes up.

We didn’t tell the kids we were getting her.

We had to be 100% sure when we went to the breeder that we weren’t going to some dodgy backyard operation. We came home and told Iggy to close his eyes, and we laid her on his lap. And although she is much smaller than she is now, she was a big puppy, and he opened his eyes and he cried he was so happy.

She hid behind the pillows and under the table the first day she was with us. She slept on her dog bed in our room the first night and didn’t make a noise, so we thought we had struck gold. 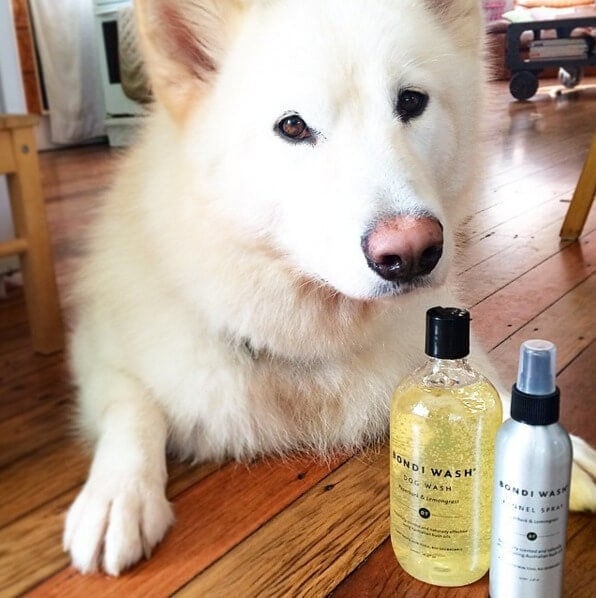 Around 4 months we learnt she didn’t like being alone.

Like seriously couldn’t handle it. We thought she was fine at home because we would come home to clean house and no wee or anything, but our neighbours came over one day and said she was crying for 2 hours. like fully crying.

Her separation anxiety has been so serious, she had to be sedated.

She still does. We rarely go anywhere without her because she can’t deal with being alone. We have done every single thing possible to help her with it and nothing has helped.

When she was about 7-8 months old…she all of a sudden ‘forgot’ her training.

It was so frustrating, because we worked really hard with her everyday and she was so good and then BAM – she would bolt if the door at home opened and just not come back. Apparently the stubbornness and ‘forgetfulness’ she was having was a very Malamute thing to do. SO much work. Imagine a giant dog who NEVER comes back when called after training non stop.

We got a trainer in who has worked with Mals and Huskys in Canada and he helped us with new training techniques and showed us a few little tricks and changed the way we train her and it had helped so much. Its taken a long time but so worth it. 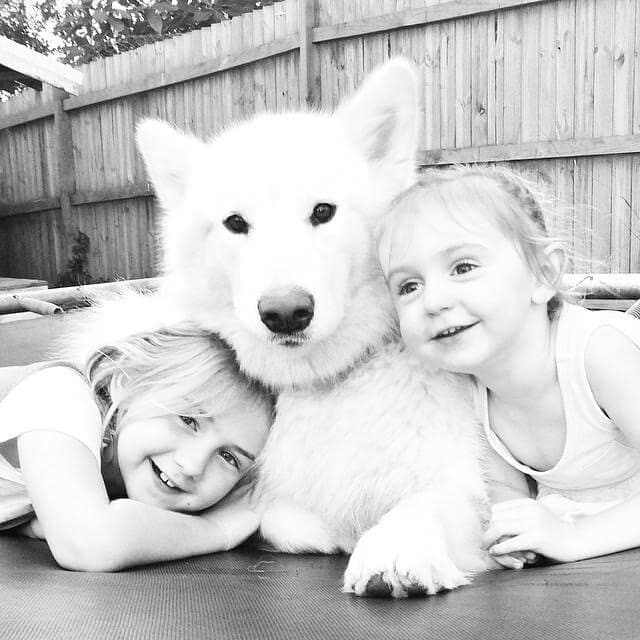 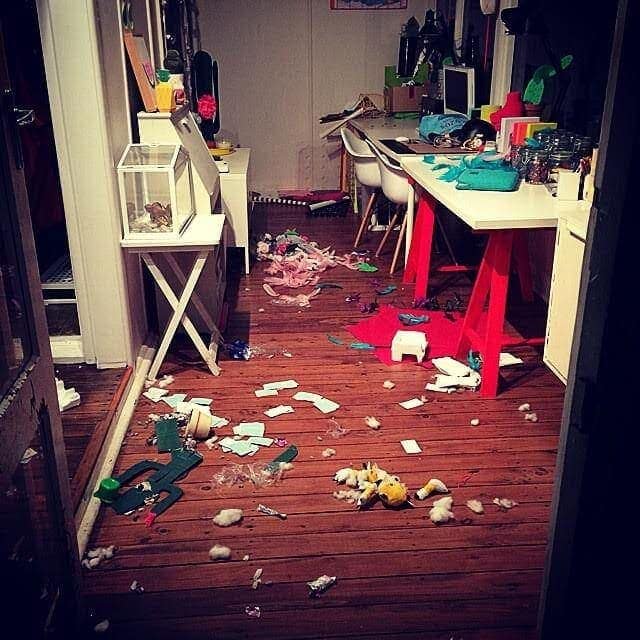 One thing you must never do when you have a puppy, is leave toys and shoes and ANYTHING on the floor.

We were so hardcore in the way we trained her with ‘her toys’ and the kids toys, but things would always slip through the cracks.

We had to leave her one time to go to our friends for dinner and she had four valium to help her cope and hopefully sleep. And we came home to my beautiful Nikes eaten. No cheap $3 thongs eaten, just the nikes I spent ages saving for. And our entire studio was destroyed. Like ripped apart. Steve had taken her for the most ginormous run and extra long so she would be super tired too, and the valium and that didn’t stop her.

One thing I am super proud of, is the fact that this dog has challenged us so much.

I know a lot of other people would have given her up to rescue because we haven’t had a life for 2 years. We can’t leave her alone, so we can’t go places as a family unless we get a babysitter for her, on a Sunday sometimes we want to just pop dow to the beach, but we can’t go all together because dogs aren’t allowed at our beaches and she can’t be alone at home. And its frustrating, but It doesn’t actually bother us that much. She is our family and we wouldn’t get rid of the kids if they were mucking up a bit or had anxiety, we would help them and adjust our life to help them.

She is the most beautiful hearted dog I’ve ever met.

She is so in love with people. People who she doesn’t know she wants to cuddle. SO you can imagine the cuddles we get from the beast. My kids adore her. Its like having a white bear. They lay on her and cuddle and rest with her and she makes sure my husband works out every morning which helps his brain injury. She is a beautiful beast and we wouldn’t have as many laughs without her. 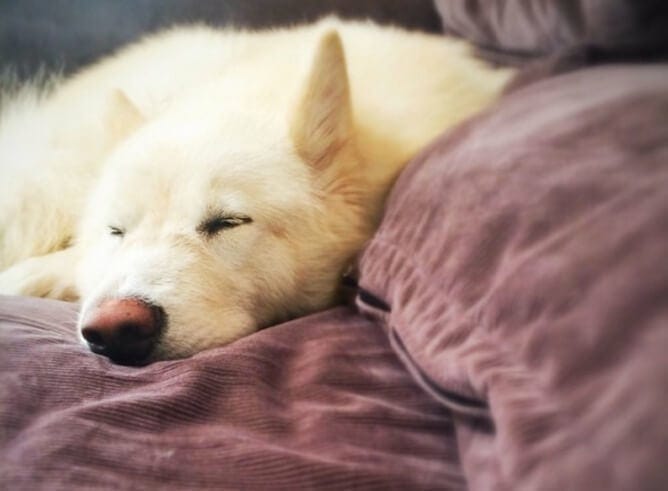 Please don’t get a Malamute or Husky without serious research.

They are not like regular dogs. They are stubborn. SO stubborn. They are smart. Coco understands everything we say but will refuse to do what you say sometimes just because she is stubborn and doesn’t want to. You have to have someone who is a serious athlete to train them. You can’t EVER miss a day of training. And I call it training because its a physical run. Which my husband uses his bike so she can run, and also does mental training. You have to challenge them with things and learn how to mentally challenge them.

If you don’t have the commitment to excursive a Malamute one to two times minimum a day they are the wrong dog for you.

Steve takes her for a run even when its thunder storming and pissing down rain. But if you commit to them they are the most lovely dogs on the  planet. Not great guard dogs at all. Unless you are a possum trying to break in…then she will eat you.

If Coco could talk…

She totally does talk. She says I love you. And she doesn’t really bark. She doesn’t stop talking sometimes. But in her brain she would be saying ‘I love you guys SOOOOOO much, please give me food please throw me a ball where is the food, i love you when are you giving me the food?’.