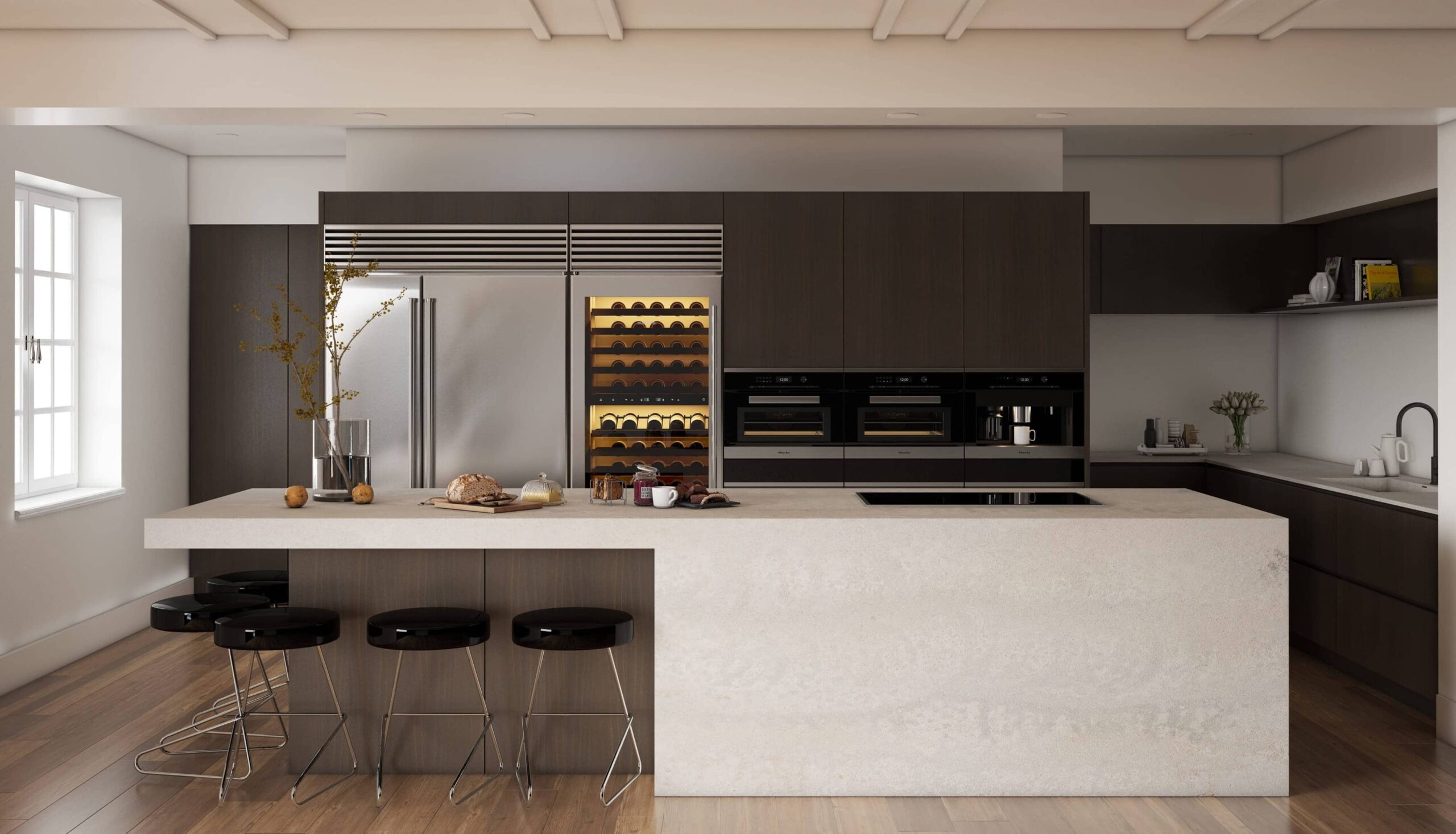 Two Dazzling New Benchtops have Landed to Revamp your Kitchen

Just when you thought it was safe to lock in your benchtop of choice, two new varieties have landed to peak your interest. It’s a case of countertop couture in today’s post. And I couldn’t be more delighted.

It was only this week gone by that I wrote this post on the big changes coming to kitchens this year and the years to follow. Industrial moments through elements like open metal shelving was one of them. And then days later this concrete look benchtop lands from the gang at Caesarstone. The universe is conspiring to tell me that I need to update my kitchen. Time to raid the bank account, because Lord knows I love industrial style.

It’s not just the concrete look benchtop that’s landed either. There’s another newbie worthy of your attention that I’ll cover further down. But the concrete one is the most intriguing for me personally, so I’ll take you through that first. Then we can get only the sleek and sparkly one (because I know you love a bit of sleek and sparkly). 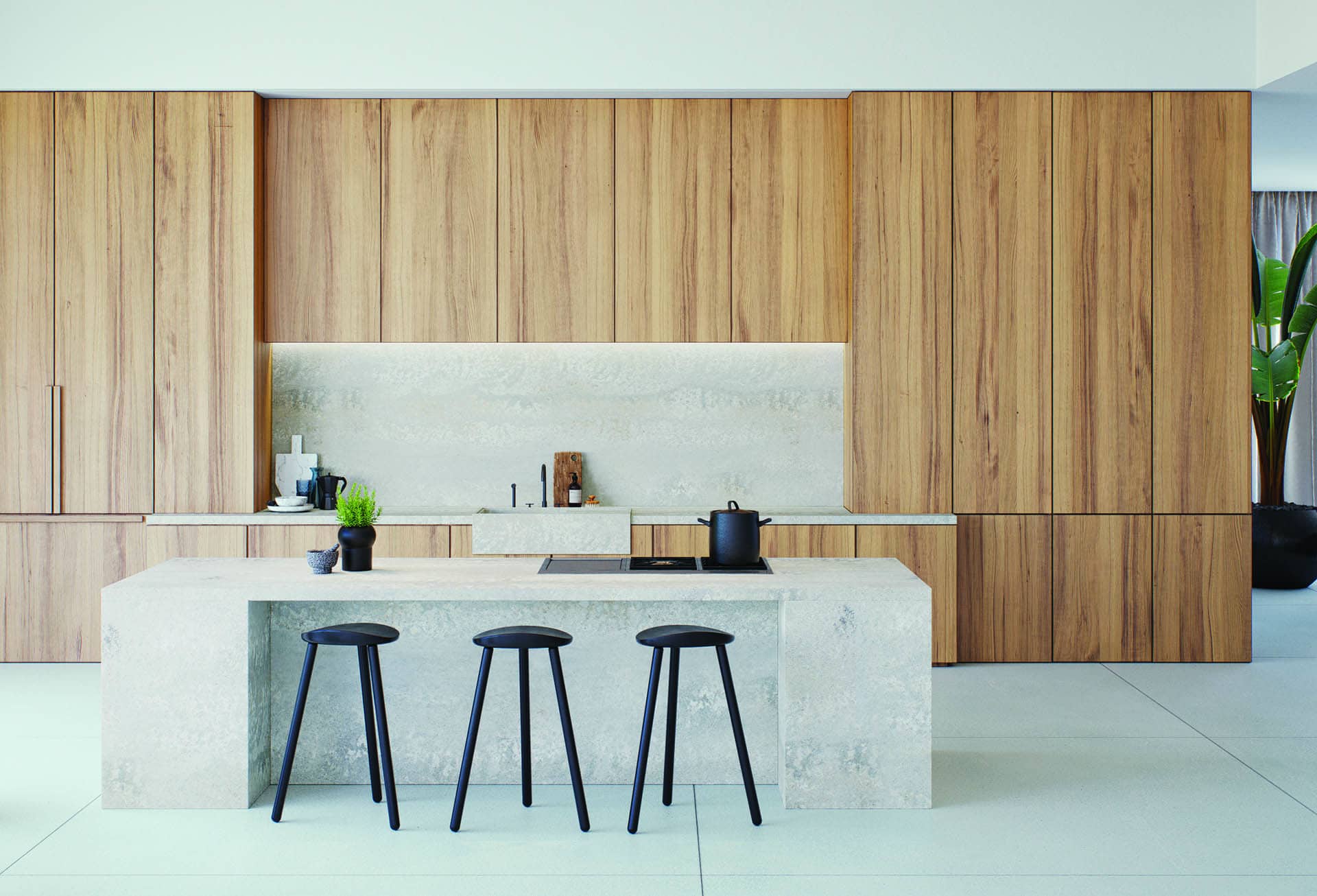 Caesarstone Primordia is the One to Watch

You know how kitchens used to be (and often still are); somewhat clinical. A little bit sterile. And sometimes just plain practical without the pretty. All of those shiny white surfaces could have you thinking you’d stumbled into a NASA spaceship. Beam me up Scotty!

The Primordia concrete look benchtop is the remedy. The idea here is that the finish introduces the organic beauty you’d normally see outside your home. It celebrates the imperfections you’d see in nature, and aims to make kitchens a warmer and more inviting haven.

The other thing about this release that appeals to me is the intentional imperfections. Concrete always has that feel to it, and it’s definitely at play in the polished quartz Primordia. In a time where we’re surrounded by home gadgets and technology, this benchtop creates a nice sense of balance by embracing the rough and the raw.

As you can see from the snaps above and below, the base colour in this concrete look benchtop is grey. But outside of that it’s also punctuated with soft off-white mineral markings and subdued brown veins. When you get up-close you’ll also discover hints of barely-there yellow and washed-out greens.

It’s a bit of a textural experience and I want in on it! 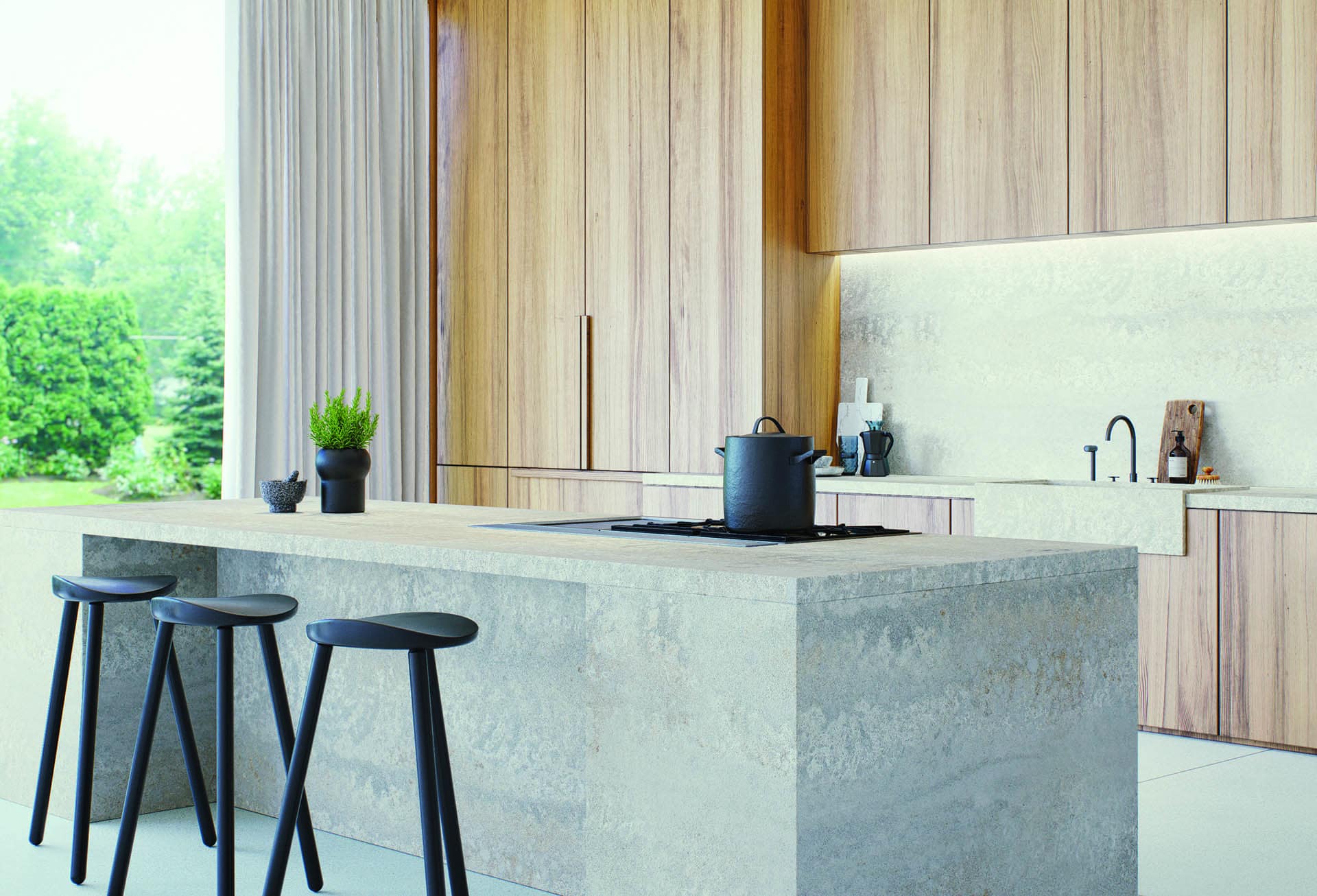 “What’s great about both materials is that they go well beyond the benchtop. You’ll notice above and below, the product has been taken vertically up the side of the bench and also onto the spashback.” 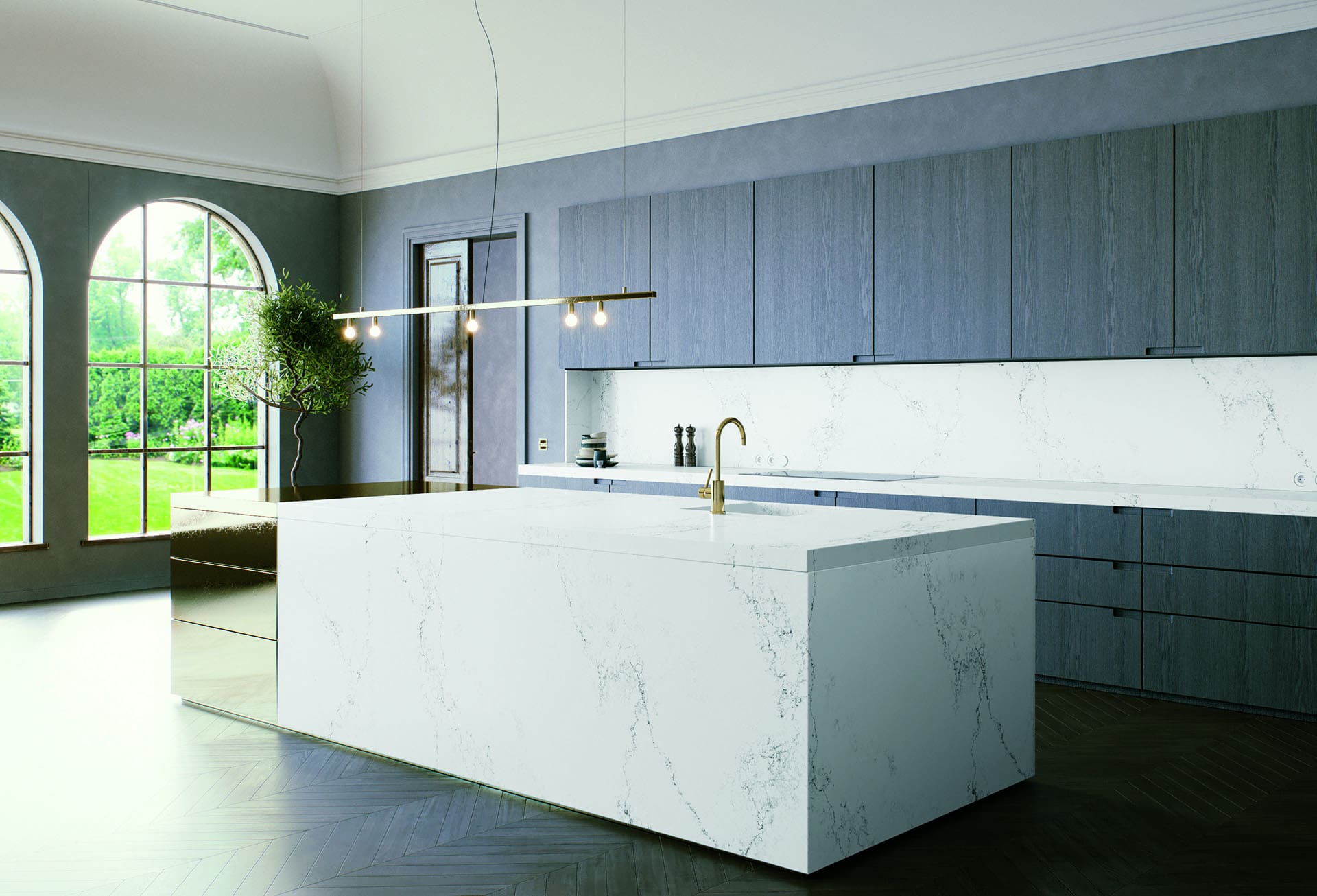 There’s something for you Purists too

I know, I know; the heart wants what the heart wants, and I know many of you just can’t say no to a white benchtop. Especially if you’re doing a Hamptons kitchen, which I’m currently helping my own clients out with right now.

Thankfully Caesarstone have also introduced Empira white, which has been ten years in the making. It’s the latest interpretation of authentic marble, which is great for those of you who actually don’t want the real thing.

Empire features a pure white base and the most striking fine black veins. It has an effortless sophistication to it that I know many of you will be drawn to. It’s really quite at home against darker flooring and cabinet colours too. And I just love the interplay between light and dark on the polished quartz surface.

What I find appealing about both products is that they go well beyond the benchtop. You’ll notice that in all the imagery here, the product has been taken vertically up the side of the bench. And get a load of it as a spashback. I love a seamless look like this. So elegant, so minimalistic. And yet so impactful. It has a quiet confidence about it when applied like this, don’t you think? 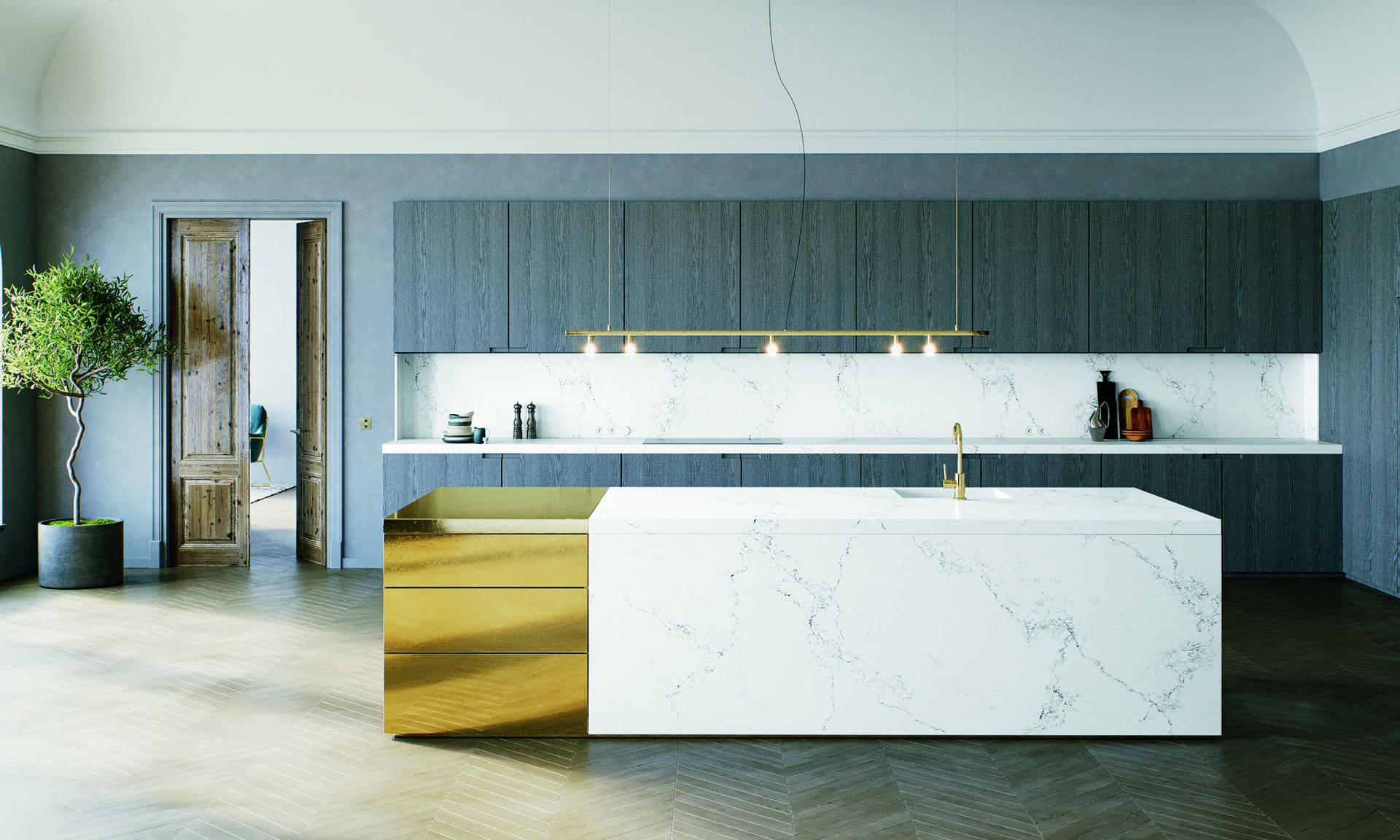 Either way, you can give these Caesarstone products a go. I’m in the midst of working on a redesign of my own kitchen at the moment. Both of these products would work wonderfully depending on which road I choose to go down stylistically.

I’m looking to extend my benchtop to get more work space, along with adding in some additional cabinets. Now I just have to decide if I go for the concrete look benchtop or a dazzling white one.

Hopefully you know which direction you’re going in. Hop onto the Caesarstone website for more into on these two releases.