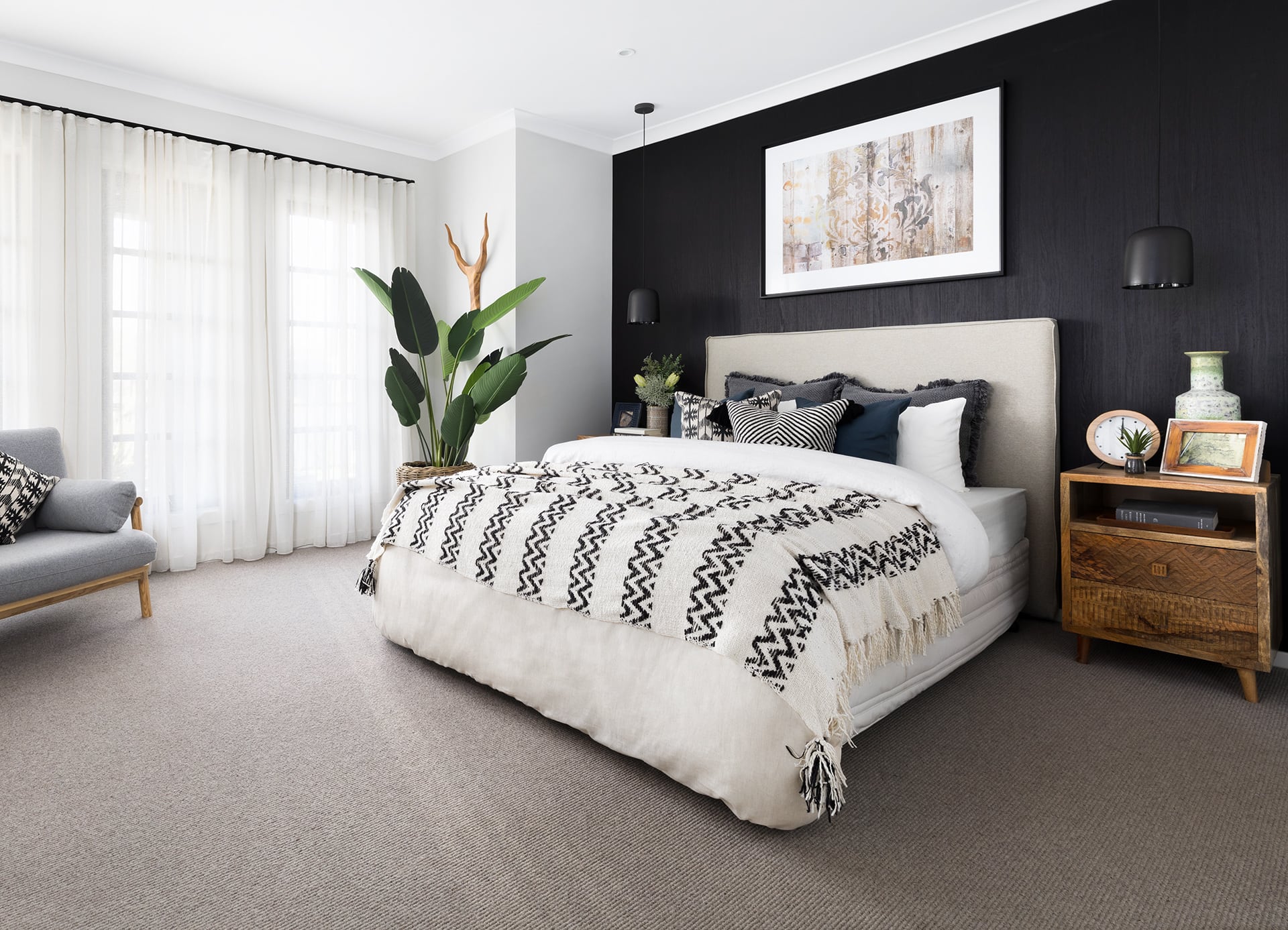 How to Style a Bed with Cushions, Pillows & Throws

How to style a bed with cushions: it’s a question that comes up a lot in my day-to-day work as a designer. So right here, right now, I’m going to give you the lowdown on how to get it right at your place.

When I do my final decorative install in a client’s home, bedding is a huge part of the day. All of the rooms in the home are fully decked out with furniture I’ve sourced already. But then I tend to bring in the bedding and decor and fully style the rooms with finishing touches so they feel complete. What can I say, I love a reveal like you see on those design shows.

And let’s face it: there’s nothing better than walking into your room and seeing that plump and plush fully-made bed looking ready to jump into. Now, I know you might be thinking, as if I’m going to go to the trouble of making my bed like this every day. I get it; there is some work involved. But consider this approach for a guest bedroom you won’t use every day if nothing else.

So let me take you through how to style cushions on a bed. But before we even get to that we gotta cover off some of the basics around bed styling. Most of the images in this post will give you loads of ideas. They’re via my friends at Metricon, who absolutely dominate bedroom styling. Click here to explore their bedroom gallery.

1. Your Doona needs to Fold Way Down

Before you even worry about how to style a bed with cushions, start with the doona! You gotta take it and fold it way down the bed. The top half of your bed is on show, and the bottom half is covered with your doona. Does that make sense? The image above captures what I’m trying to say perfectly. You can choose to fold the doona under itself, or roll it forward over itself.

This works especially well if the doona or quilt in question is plump and plush. See this post for my roundup of the best place to get a good quilt.

Gone are the days where the quilt ran all the way to the head of the bed with pillows popped on top. Even in recent years we’ve done a small roll-down of the quilt so you see a bit of sheet at the head of the bed. But now… it’s a major fold under. We want to see those glorious sheets. Which brings me to my next point… 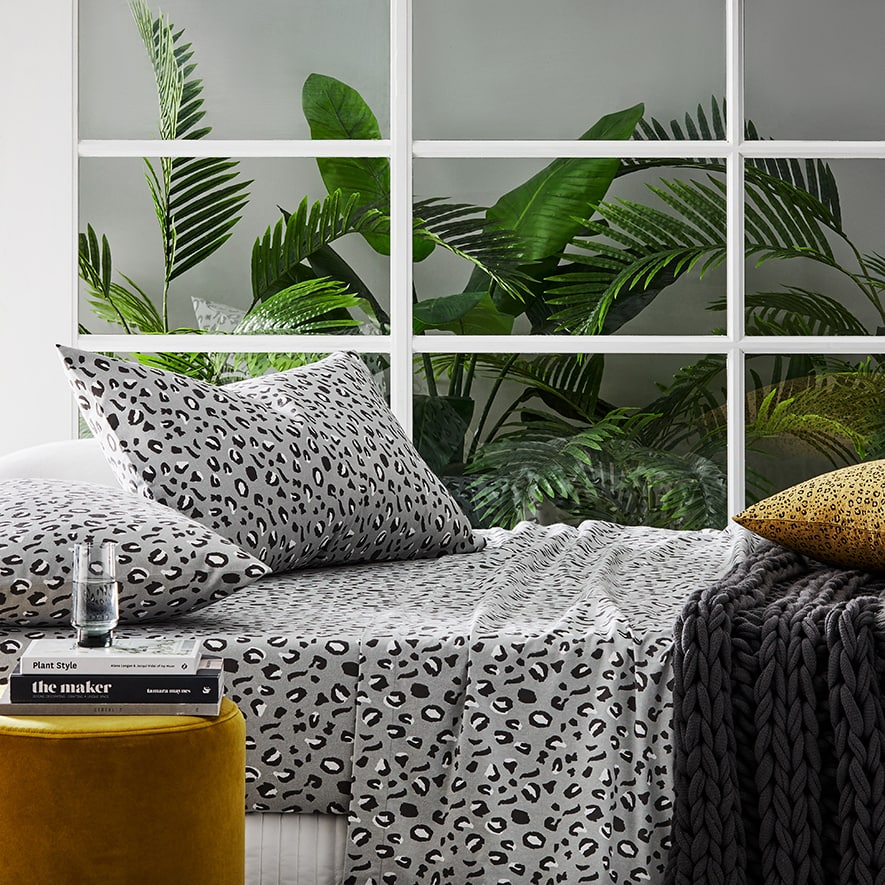 2. Sheets are the new Superstar of your Bedscape

Yes I just used the word bedscape. I made it up and you should totally start using it. But here’s the reality of the situation: sheets are no longer an afterthought when it comes to how to style a bed. They’ve moved well beyond white. In fact, I encourage you to avoid white and start to explore other colour palettes altogether.

This raises two other points: one, you should buy two sheet sets and mix and match them on your bed. You don’t have to (and shouldn’t) have your fitted sheet and flat sheet in the same colour story. Same goes for your pillows. Start to think of the bed as many individual parts all coming together to create the whole. Rather than just buying one set and using just that.

Secondly, think about pattern. You could easily do a flat quilt cover, for example, and then have a dramatic sheet scenario. Think something like leopard print (the ones above are from Adairs), and enjoy the vibrance it can bring to the bed. 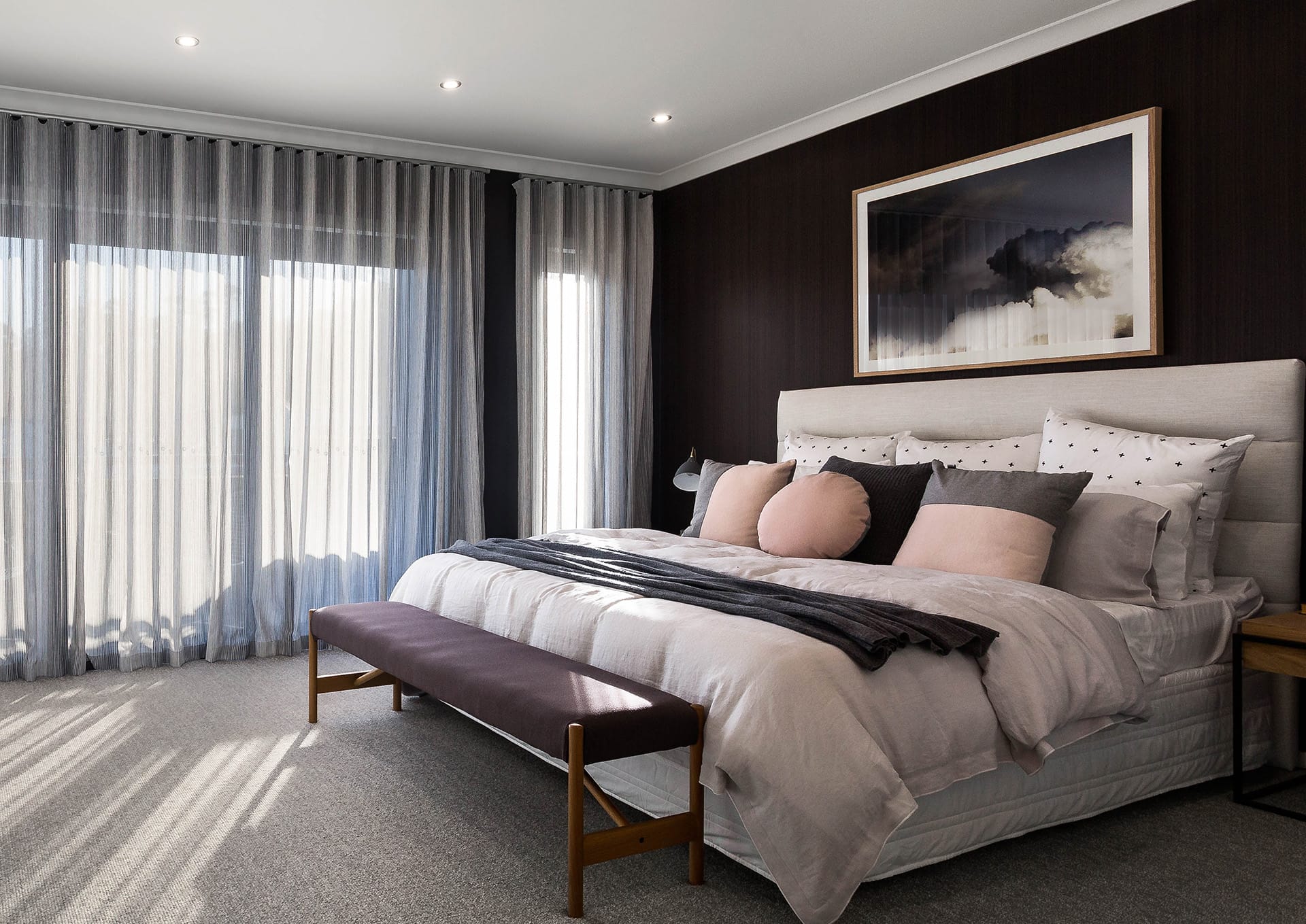 Don’t laugh. You have to have at least six pillows at the head of your bed. That’s for a double or queen bed. You want two Euro pillows against the headboard, and four standard pillows in front of them.

If you’re in a king sized bed, you’ll need three European pillows at the head of the bed to make it feel full. You don’t want large gaps in your pillow arrangement. It looks cheap and nobody wants to look cheap.

Now, when it comes to styling pillows, think outside the box. You don’t have to sit them up perfectly. Consider laying pillows on their back on one side of the bed. I call this the ‘horizontal stack’ and it’s a great way to bring a little interest and variance to your bed styling situation.

Like with your quilt, your pillow arrangement can be made or broken depending on the type of pillow you have. Here’s a quick snapshot of how to find your perfect pillow.

4. And Then Come the Cushion Styling

Now that you have all your pillows lined up, it’s time to tackle how to style a bed with cushions. Now, I’ve written many blog posts here about cushions over the years, and one thing has never changed: your cushions have to have feather inserts.

That plump, karate chopped cushion look can only be achieved if the insert is feather. But if you see a cushion you love and the insert is one of those cheap polyester ones, buy it anyway and then burn rubber all the way to a store like Spotlight or IKEA and buy some feather inserts. They’re as cheap as chips and totally worth the trip.

The other thing worth mentioning is cushion size and quantity at the head of the bed. I like to see at least 50cm cushions on display in front of your pillows. One in front of each standard pillow for a more uniform look, or go three across the bed for a more packed-in, sumptuous feel.

You can also go for more than that if you want a really relaxed look. For example, you could bunch together a few square cushions, a couple of rectangles, and some round cushions. This would give the bed a really chilled and relaxed vibe. It works particularly well in a boho kinda bedroom where you want it to feel really cosy, but not too stuffy.

Seriously though… never let me see a polyester cushion on your bed. And never under any circumstances have it sitting on a diagonal. I’ll come for you!

You could even run a rather large coverlet across most of your doona cover. This works nicely if the doona cover is in a plain colour like white. Simply cover most of it with a coverlet in a more striking shade and you’ve completely elevated the look of your bedding. This works especially well if you’re on a budget. The pieces you won’t see as much, go cheaper on. The ones you showcase more, you invest in!

Outside of a coverlet, the end of the bed should have a throw scattered over the end of it. I love a cable knit and I love a tassel. The exact type of throw is up to you, but always opt for a larger one than a smaller option. There’s nothing sadder than a large king-size bed with a little throw sitting at the end of it all on its lonesome.

And here’s the thing about a throw. It’s called a throw for a reason. Often, if you just chuck it on the end of your bed in an unintentional fashion, it looks so much better than if you laboured over it for hours. Trust me, I’ve done this in the past and labouring over a throw is not a good way to spend a Sunday afternoon!

I hope these hacks have helped you with how to style a bed with cushions, pillows and throws. I swear, nothing makes me happier than seeing a divine bed made up to look phenomenal. And like I said, if you can’t be bothered doing this in your master bedroom, at least give it a crack in a guest room.

Drop me a comment below if you need any more pointers on how to style a bed at your place. 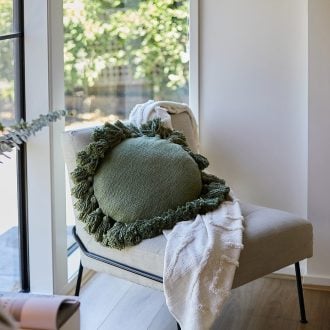 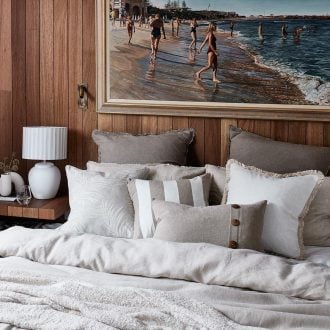 Rustic Bedding Ideas: Style Tips (and Where to Shop) for a Relaxed Bedroom Look