There are loads of changes that’ll give your bedroom a new lease on life. But trust me when I say that the feature wall is the biggest and best one. So that’s what today’s showcase is all about, decorating junkies. Prepare yourself for a whole slew of bedroom feature wall ideas. Because these are all pretty spectacular.

Now, there was a time when feature walls in bedrooms were thought to be very on-the-nose. And granted, I lived through the early nineties and saw enough burgundy and plum painted walls to last me a lifetime. So I totally get where the naysayers were coming from. But as with most things, feature walls have been put back on the map. And it’s all thanks to some clever applications that go well beyond just paint.

It should be noted that all of these killer ideas come via the team at Metricon, who I’ve been working with as a presenter for ages now. Scroll through and soak up all of these feature wall ideas. And then drop me a comment at the end and let me know which one you’re keen to rock at your place!

Now there’s nothing wrong with a flat paint colour on your walls. It certainly elevates the space more than a white wall does. But let’s be more adventurous this year (I know you have it in you!). I’m so smitten with paint effects like suede or concrete at the moment. They bring such sense of depth and movement to the wall in question, in a way a flat colour can’t.

I recently used Dulux concrete effect paint on the walls of my Camberwell project and it came up an absolute treat. It gave the room a moody, industrial vibe without making it feel too heavy or rustic. The paint is smooth to the touch so it doesn’t weigh the room down, but it certainly does the job in making the space look more interesting.

Now don’t clutch your pearls at the idea of wallpaper. I know, I know… it can be scary and provoke flashbacks of papers from the seventies. But I have to tell you, modern wallpapers are anything but terrifying. And they’re one of the first things I ask my design clients to let me do.

Wallpapers like the patterned one above are so subtle that they don’t overwhelm the wall. But they do add an additional layer of warmth to the bedroom. And who doesn’t want their bedroom to feel cosy and inviting?

I used a master bedroom feature wallpaper in my Melbourne CBD project, which was a bit art deco inspired. And seriously, take a look at the images in that post and you’ll absolutely agree that it looks amazing. If I do say so myself.

Wallpaper is also relatively affordable. I look to places like Milton & King or Grant Dorman for my wallpapers. Both can organise samples for you. I tape the samples to the wall for a while to make sure I love them before I purchase the rolls.

I always bang on about layers in a room. But they’re so so vital in making the space feel resolved. You know when you walk into a room and it just feels ‘complete’? There’s an ooh-ahh sensation that comes over you. The whole space just feels so inviting. Well, that doesn’t just happen by accident. It’s because the layering has been executed perfectly.

Above is a great example of layering from the design team at Metricon. I love the combination of upholstered wall panels and tinted mirror. It gives the space a high-end hotel feel, don’t you think? You could actually just opt to do panels on your wall at home if you didn’t want to include the mirror. You could even DIY it by purchasing timber panels, some foam underlay and fabric.

Of all the bedroom feature wall ideas this is one of my faves. And it’s so at home in a Hamptons property. The image above is an absolute Hamptons dream come true, and I’m sure you’ll agree that the room just wouldn’t be the same if the walls were covered in flat white paint.

I’ve actually published an entirely separate showcase dedicated to tongue and groove wall panels. It’ll show you loads of different colours and ways to execute it, along with where you can buy them locally to install them yourself. I love them on a bedroom feature wall, but they also shine on a ceiling.

Oh, and if Hamptons style is your cup of tea, you gotta click here to check out my guide on the new way to achieve Hamptons style at your place. It’s definitely going in a more sophisticated direction in the years to come.

Now this is probably going to be the priciest option of all the bedroom feature wall ideas showcased here. You’ll need to engage the help of a joiner who’ll be able to measure and quote the wall in question and then produce the correct panels of joinery to your size and colour specifications. Don’t let that put you off though! Some jobs are so ripe for DIY, while others are better left to the professionals.

Like the fabric panels already discussed, these timber panels are a look that will definitely give your room a hotel feel. I personally quite like a master bedroom to feel high end, with a sense of sophistication. So I’m fully on-board with giving panels like this a go. Would you do this on your room? Let me know further down in the comments.

I love the traditional feel wall mouldings bring to a room. And when it comes to bedroom feature wall ideas you can do yourself, this one’s a winner. That’s if you’re into a bit of DIY. If you don’t mind getting in and giving it a go yourself, click here to get some tips on installing yourself. There’s also a roundup of wall moulding ideas from my girl crush Emily Henderson.

And on a side note, if you’re loving the look and feel of the master bedroom above, you can tour the entire home by clicking here. It’s a wonderfully moody Melbourne display home from Metricon and I adore it.

OK, so I know this showcase is all about feature wall ideas for bedrooms, but who says I can’t cheat a little? And you must let me because the idea above is just too divine not to include.

Sure, the wall itself is still painted a light grey, which we love. And it’s decked out with some gorgeous art, which we’re here for. But then get a load of the feature ceiling!

I love this idea in a larger bedroom where the ceiling is higher than the standard. Throw in a feature pendant light and you have yourself a killer boudoir you can be proud of! 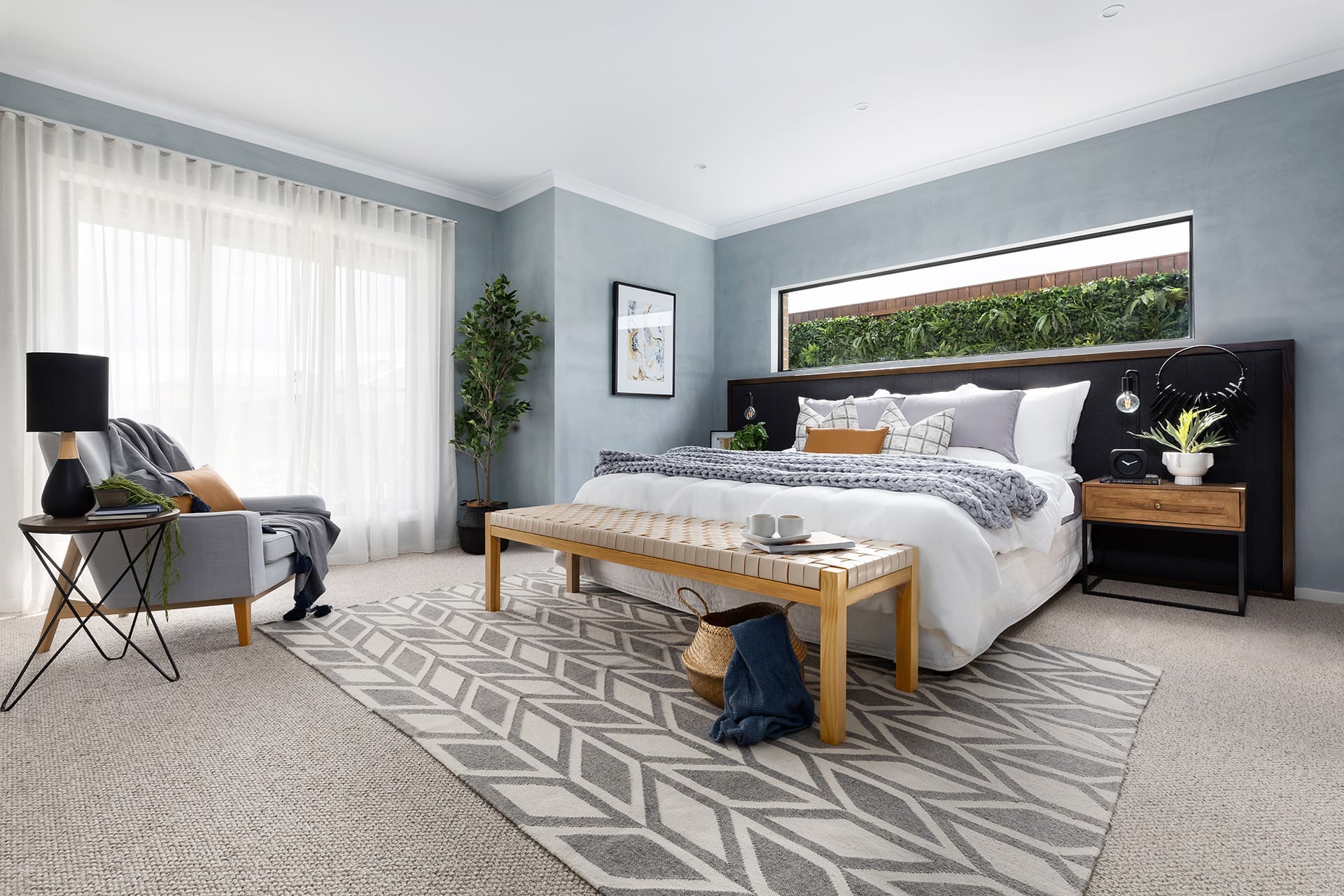 8. Use a Window as a Feature

Now this is a feature wall idea not all of you will be up for. But I wanted to include it because I know many people stress about the idea of having a bed underneath a horizontal window, but you need not worry.

I love that the window in the bedroom above leads your eye to the garden outside. It blurs the lines between indoors and out and allows nature to become part of the internal scene. Because of the height of the fence here, you could leave the window uncovered if you wanted to. Or you might opt for a roller blind or plantation shutter.

Either way, it’s nice to include a window in your feature wall. And who knows; this might inspire you to go and install a window above your bed. Go on, I give you full permission 😉

This one is my fave of all the bedroom feature wall ideas. It’s dark, it’s moody and it brings texture to the space. I’m smitten and I need some of it in my life immediately.

WoodWall is the name of this dreamy product. It’s a gorgeous pre-finished timber panelling system, produced from architectural grade veneer. You can apply it directly to plaster or plasterboard with no requirement for any heavy substrate such as MDF. And it comes at less than half the cost of traditional veneered panelling.

You can source it through Elton Group, and it comes in loads of different colours.

10. Make your Headboard the Feature Moment

Again, I cheated a little here. This isn’t exactly a bedroom feature wall. But I wanted to draw your attention to how good an oversized headboard can be in a bedroom. And if you think about it, the headboard acts as the one focal point in the room. It becomes the feature moment. And given that it takes up a large portion of wall, I reckon you can let this one slide 😉

I love the way the brown leather brings richness, mood and warmth to this room. It’s very masculine and modern. It’s exactly the kinda look I’d love to replicate in my own master bedroom. It’s the star of the show and then the subtle grey wall behind it becomes the supporting player in the space. I love it, i want it.

Which is your fave of all the bedroom feature wall ideas here? I’d love to hear from you in the comments below.