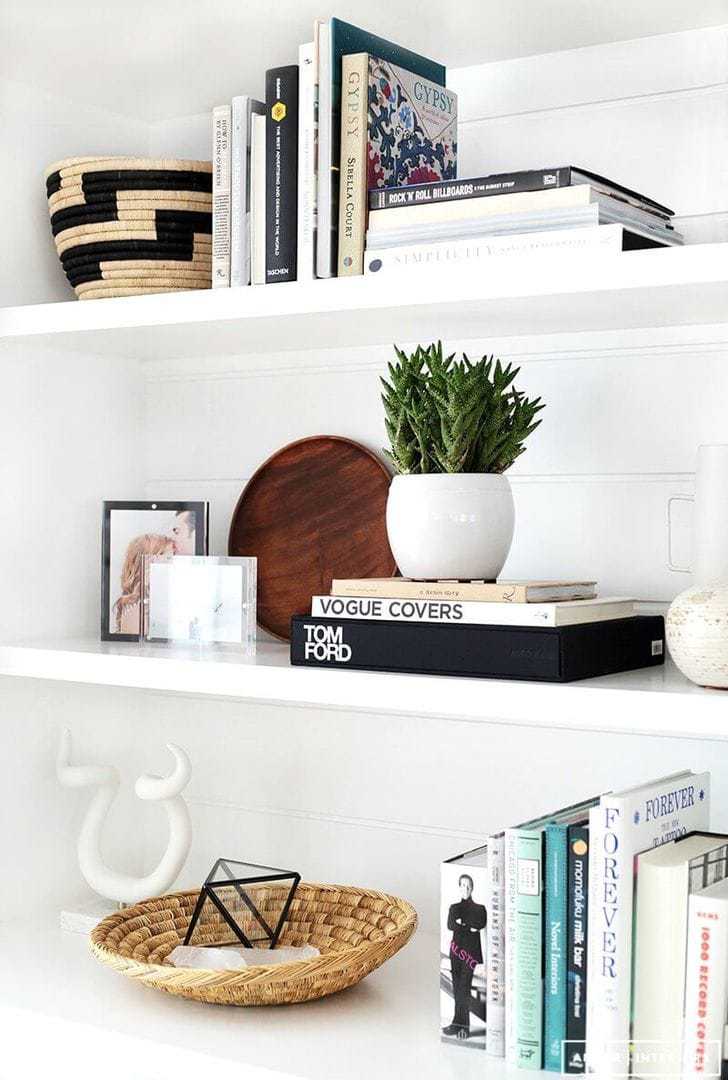 How to Style Shelves: 6 Ideas to Get you Decorating like a Pro

How to style shelves can be quite the conundrum, especially if they’re long, open and floating varieties. Cubed shelving systems, like the style you can get from IKEA, tend to be more easily filled because there are distinct boxes to play within. When those boundaries are removed, people get stuck. Here’s some ideas to get unstuck! 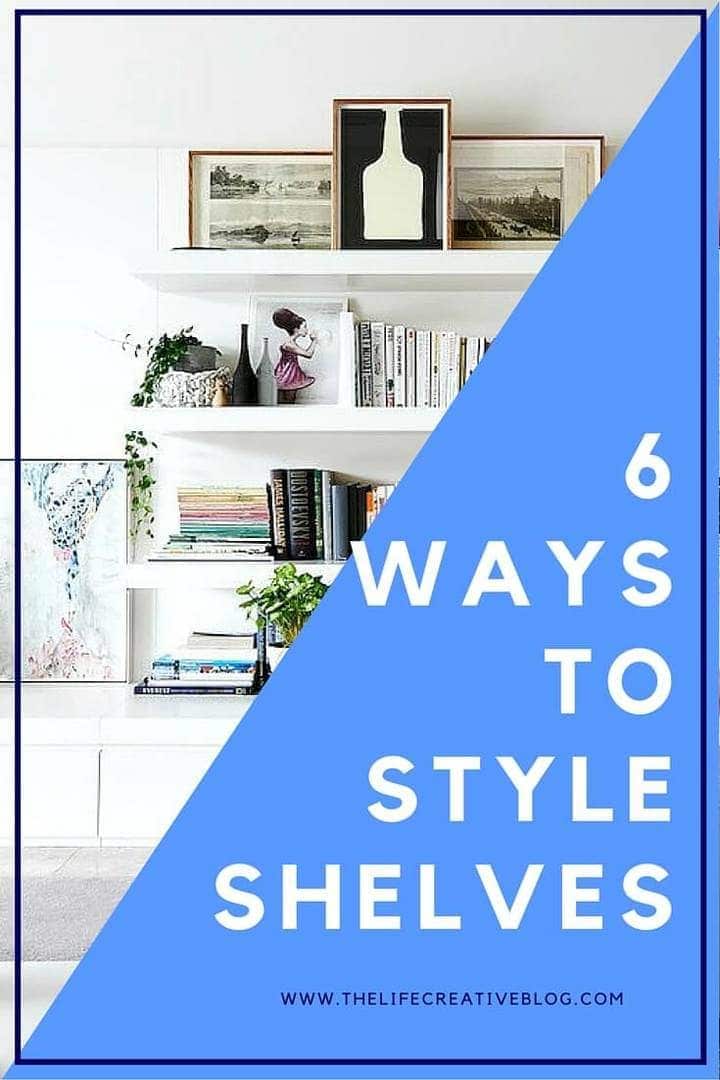 How to Style Shelves: 6 Ideas to Get you Started

When it comes to styling a long shelf, be it in a shelving unit or fixed to a wall, there are some basic rules and principles you can apply, in order to have them looking like the dreamy images you see in magazines and online (like the gorgeous shots in this post, which I’ll credit as we along). I’ll also break up the tips and ideas into bite-sized pieces, so you can get a better idea of how to style shelves more easily.

The biggest tip I can give you though is to play, play and then play a little more. Styling is a funny thing; you often just keep fiddling and tinkering away with something until it feels right. But in order to know when it feels right, you do need to understand the basics. So let’s cover them off now. 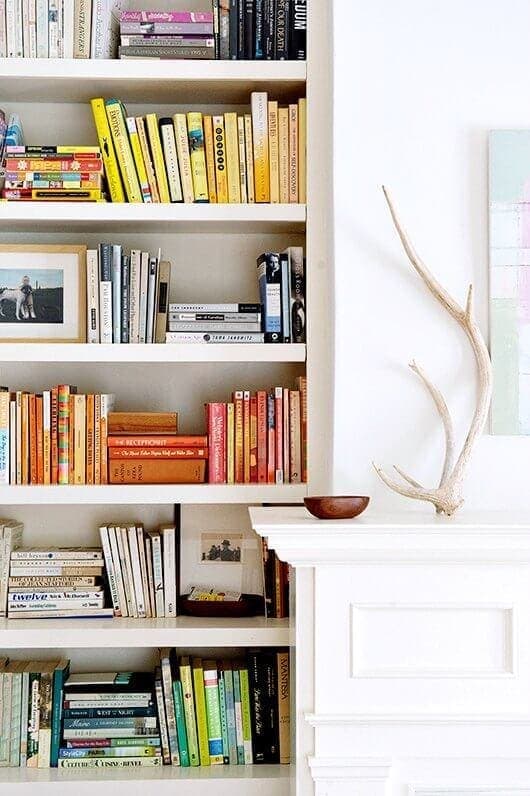 Books are a Good go-to

I know it sounds obvious, but utilising books in large scale is a great way to take up space on a long shelf. You can create some magical moments by stacking books vertically and horizontally, then butting the stacks up against one another to form an L-shape configuration (see image above from SF Girl by Bay). On the lower stack, place an ornament on top to make the vignette feel resolved.

You could also colour coordinate the book spines to create pops of colour in different places on the shelf. If the books are new, place an older ornament with them to create a nice contrast. You might also want to consider colour blocking your books; clustering books according to the colour of their spine. This is quite impactful if you want to create a little drama.

More is more, and less is a bore

I often see shelves that are long and feel incredibly bare, because the pieces on them have been staged like an art gallery, with three or four individual items running along the shelf with a lot of space in-between. A shelf really is at its best, stylistically, when it looks less thought out. So veer toward filling more of the negative space.

As I said above, people tend to find filling cubes up far easier than styling long shelves, because a cube has obvious boundaries you can’t go over. Apply the same idea to a long shelf though. Along the horizontal plane, set up separate vignettes, but ensure each scene touches the next. You just have to ensure that each scene feels separate while also feeling part of the bigger picture.

This approach is subtle, but it works, especially is you ensure your boundaries on each shelf are at different points along the plane so that everything is not symmetrical.

Variety and Contrast is Key

A shelf that people will feel wowed by is packed with different objects; varying colours, shapes, textures, patterns – the list goes on. Place a plant beside a concrete candle, a rattan basket beside a glossy or glass ornament. It’s the contrast in different elements that makes a space most interesting, and the shelf is no exception.

Try mixing old and new, hard and soft, round and square items. It’s always nice to include a random, somewhat ugly or questionable piece that people will question; it’s good to get them talking!

The most successful shelves are ones that have a display that tells a story visually but also emotionally. Consider placing a photo of a recent holiday, in a gorgeous new frame, places alongside an old camera that’s been passed down to you.

Or, perhaps you have a contemporary dish you could fill with jewellery that’s been passed down by a loved one who is no longer with us. Place a photo beside it, or put an old note from them in a frame. It’s these stories that make a shelf (and a home) feel soulful.

Play with Height and Depth

People often fall into the bad habit of placing everything in a straight line on a shelf. But remember that this piece of furniture – even if attached to a wall – is a three-dimensional object and will be seen from varying angles.

With that in mind, tilt square objects on an angle to mess with the clean lines, lean some pieces at the back of smaller objects, and ensure there are varying heights on each shelf. Overlap some of your photo frames, turn some books around so you don’t see the spine, and consider turning objects on their side.

I also love to go beyond the limits of the shelf. For example, place a draping plant on the edge of a shelf and let it cascade to the shelves beneath it. Or do a similar thing with a pendant lamp; hook its cord to the top of the shelf on a hook and let it run down the side.

I hope this post has given you some good ideas on how to style shelves. As always, I’d love to hear from you in the comments below with some tips you’ve rocked at home on amazing shelf vignettes.