Inside an Off the Plan Melbourne Apartment Packed with Aussie Design

Stealing design ideas for your own place is best done by looking inside the homes of others. In today’s post, TLC takes a peek at an off the plan Melbourne apartment that’s loaded with on-trend Aussie design. 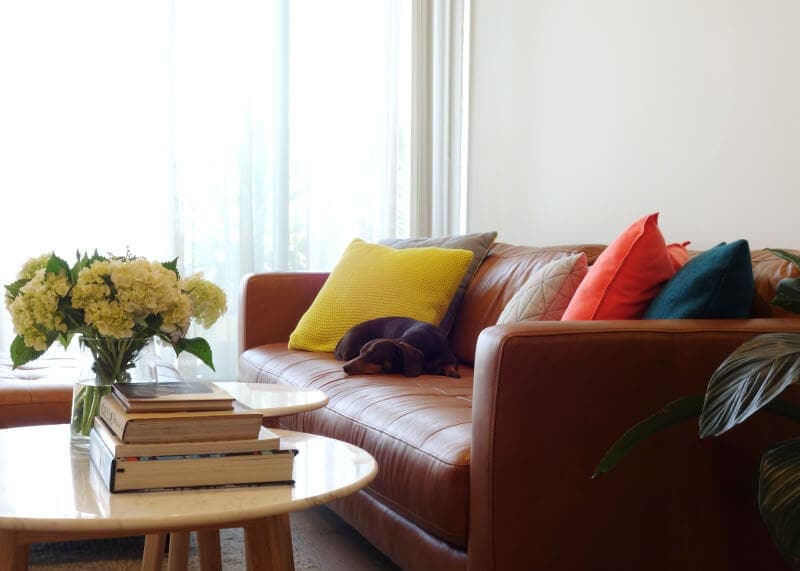 For couple Brad George and Brendan Lawrence, opting to buy an off the plan Melbourne apartment in South Yarra was daunting in some respects. For many, the idea of imagining what the end result will look like is a task for the too-hard basket, but the guys pulled it off and the results are stellar.

“Our exact floor plan wasn’t being depicted in the ‘artists impressions’, and we had to use our imagination as to how certain furniture pieces would work in the space,” Brad explains. “The developer had created beautiful imagery of the finishes and colour schemes, which turned out to be very accurate to the real thing”.

The South Yarra apartment is a two bed, one bath dwelling on the 23rd floor, facing west with both bay and city views. Brad and Brendan were eager to be amongst the hustle and bustle – with cafes, restaurants and bars within easy walking distance – plus parks nearby to cater to their two dogs, Poppy and Rolo. 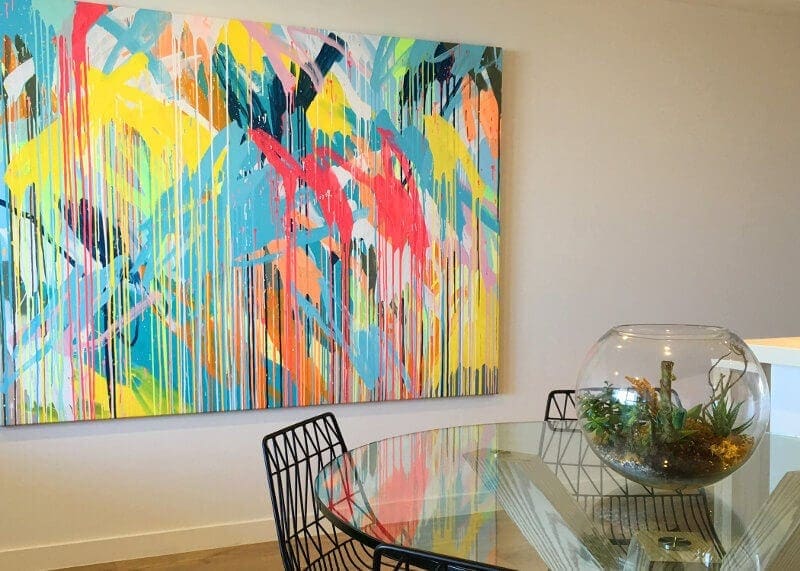 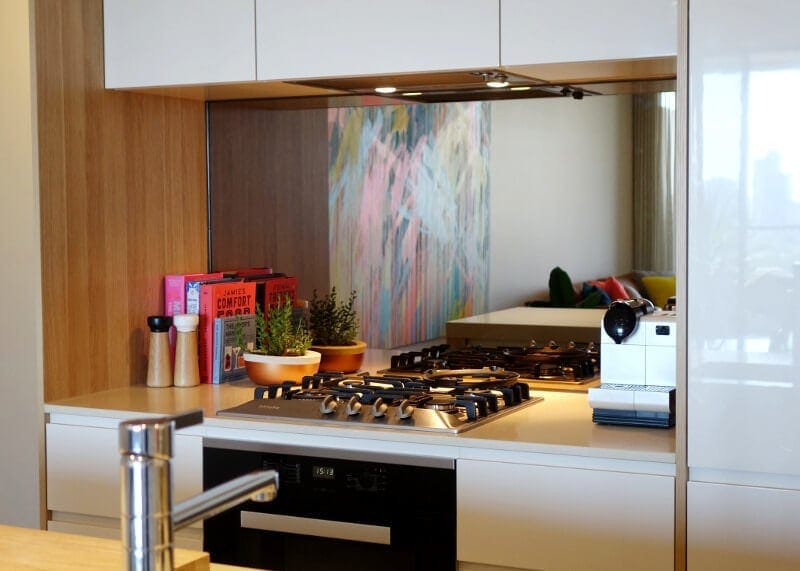 Inside the home, the lads were keen to channel a somewhat Scandinavian aesthetic. Off-white benchtops and cabinetry, light timber accents and flooring and  the use of marble provided a subdued foundation for them to introduce accent colours on top of.

“We definitely had an idea of what we wanted our apartment to look like,” Brad tells me. “The bonus of buying off the plan was that we had time to research, plan and save for new furniture and key items.

While there was some debate between the two when it came to exactly what furniture and decor items would end up in the apartment, the end result is a beautifully considered one that shows a lot of restraint. In an apartment of this size, clutter is your enemy, and the boys have steered clear of over-filling zones with too much decor. 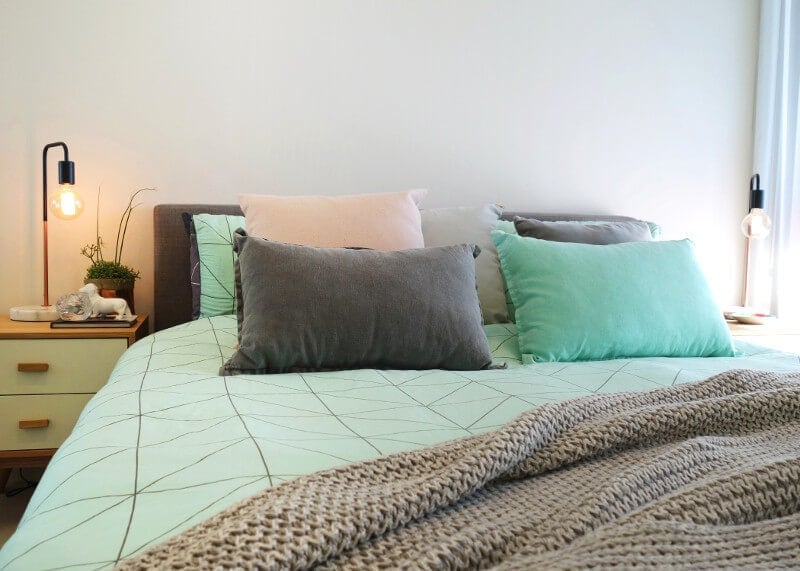 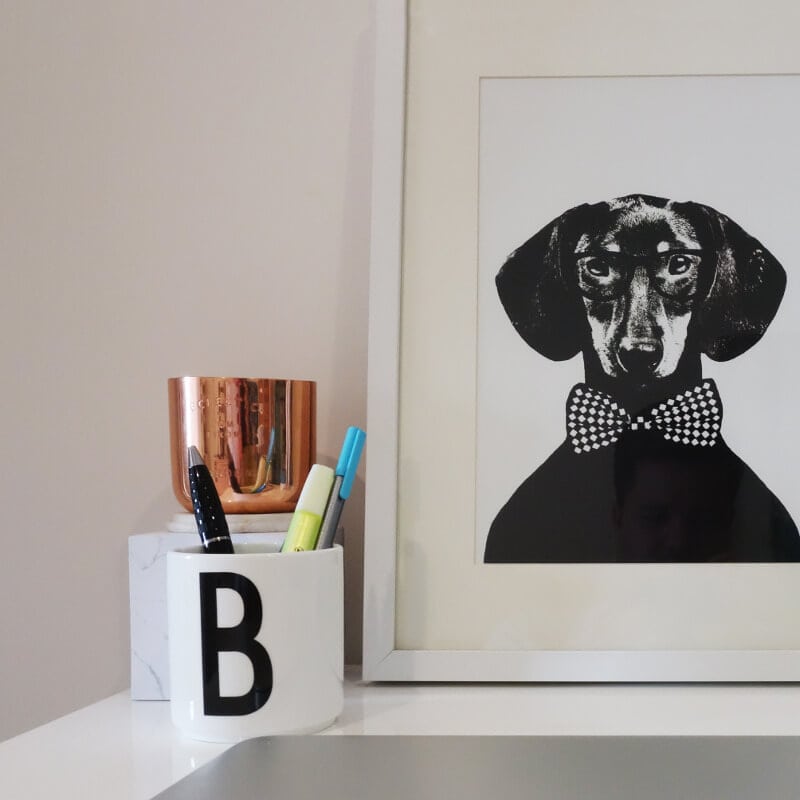 Key pieces like the Latitude Sofa from Freedom and the marble coffee table from Harpers Project are the standouts in the space and help create a sense of casual sophistication.

The commissioned artwork by Rowena Martinich is by far the star of the show, though, and sits in Brad and Brendan’s favourite zone in the apartment; the open plan living and dining room.

“We love being able to see out across our living area to the spectacular city views while standing at our island kitchen bench,” Brad tells me of this part of the home. “It is great for entertaining our friends and family – and for us to enjoy each other’s company in such an open and relaxing space”.

What’s your favourite part of this off the plan Melbourne apartment? Drop a comment below and share your thoughts on Brad and Brendan’s inspiring space.