Inside the Sunrise Set Makeover: A Giant Eight Months in the Making

Feb 1 marks the start of the official ratings period for TV networks, with a tonne of shows set to premiere and return. But for lovers of design (that’s us!), Monday morning was all about the new-look Sunrise set.

TLC has the inside scoop on a television transformation that was eight months in the making. 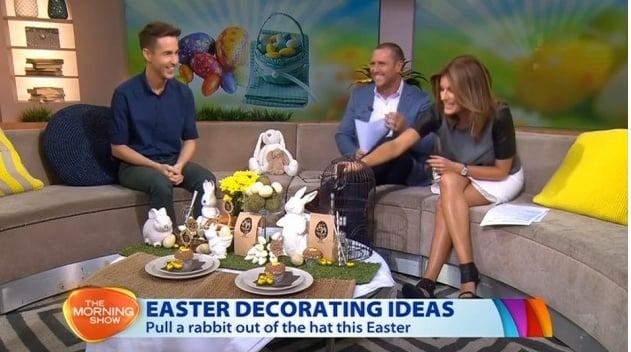 I’ve been on the Sunrise couch a couple of times in the last few years. Well, The Morning Show couch to be precise, but it’s a sofa that does double duty between both shows.

What I found most surprising when I filmed my segments was just how versatile the set was; a well-oiled machine of configurable parts that move around multiple times in the course of one morning. It’s actually quite amazing to see all of the chaos behind the camera unfold, which you’d never know was going on while you’re watching the show.

Even though the old set had won awards and was only six years old, the show’s executive producer Michael Pell tells me that it was time to take the look and feel of Sunrise in a more modern direction.

“The world has changed a lot. Trends have changed. Technology has changed. The old set wasn’t open enough, didn’t make the best use of floor space, and the design (fake grass and lots of homewares) we felt was dated”.

Taking almost eight months to complete – from concept stage to design, revisions and constructions, to installation and lighting – Michael explains that there were many challenges along the way.

“When you’re opening yourself up to the elements so much with windows, there are lighting challenges that come with that,” he says. “Also, how to balance the needs of Sunrise with those of the various other programs that come out of the same studio space: Seven News national and Sydney, The Morning Show, The Daily Edition and Sunday Night”.

The result of the dramatic transformation is a Sunrise set that feels expansive. It’s now more versatile than the previous setup, with a space that’s far more open to the bustling Martin Place outside.

“I’m pleased with how it’s turned out. It’s bright and sleek, and to me it feels warm. It also has so much flexibility so we will be able to add to it,” Michael says.

The biggest question I had was what happened to the old set and decor. Does it just get thrown away? I noticed Kochie broke one of his most-loathed vases from the old interior last week (granted, it was pretty dated), but what about the rest of the set?

“All the props and set pieces have been put in storage,” Michael tells me. “I’m a hoarder. I’m not ready to part with any of it yet. We even kept the desk. We may end up auctioning some of the set off. Now we just need to find a buyer!”.

Are you loving the look of the new Sunrise set? Drop a comment below and share your thoughts on the sleek new look.