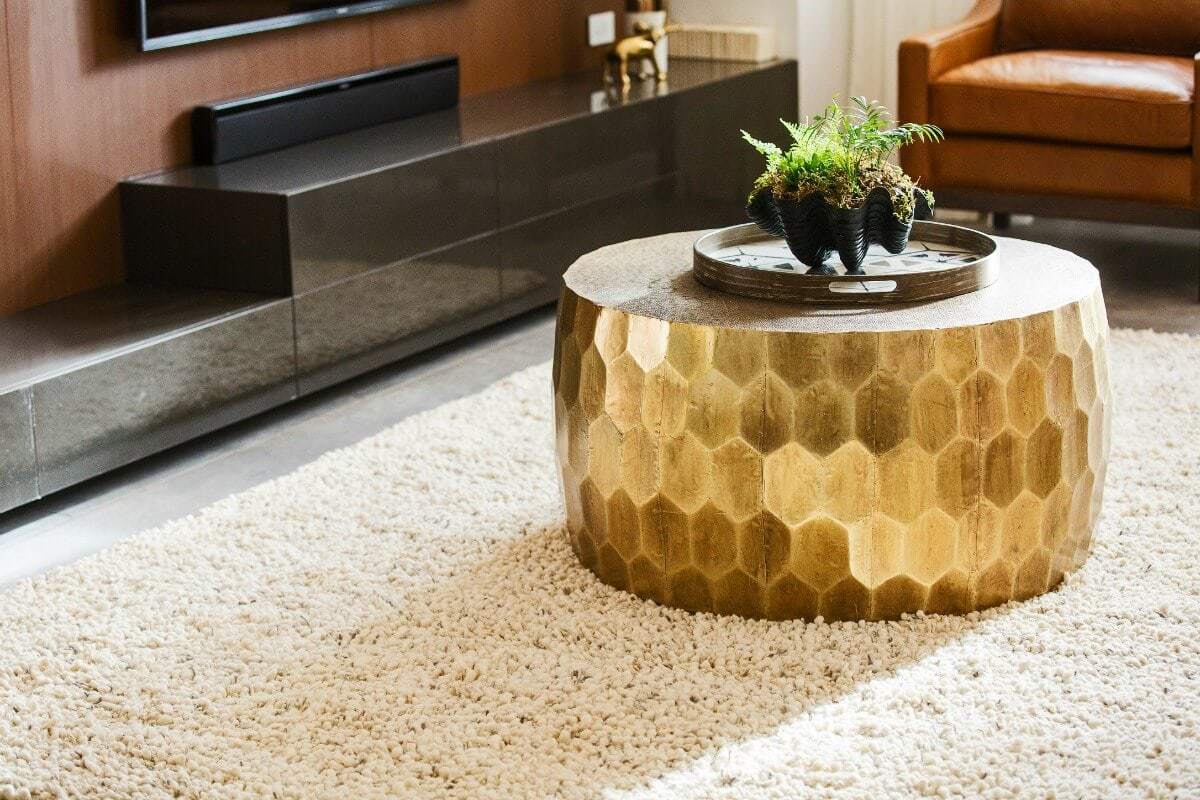 Finally The Block 2016 unveiled my favourite area of the home to style this week: the living and dining rooms! If I saw one more bathroom or guest bedroom I was going to go postal. Kinda like the way some of the contestants did this week if the commercials are anything to go by.

I don’t watch the show throughout the week as there’s way too much drama. I’m all about the design and room reveals. But it looks to be getting a bit nasty on the show, don’t you think?

Anyway, this week left me asking just one question: why are we hatin’ on rugs? A few of the spaces were rug-free and looked quite odd because of it. Let’s take a closer look… 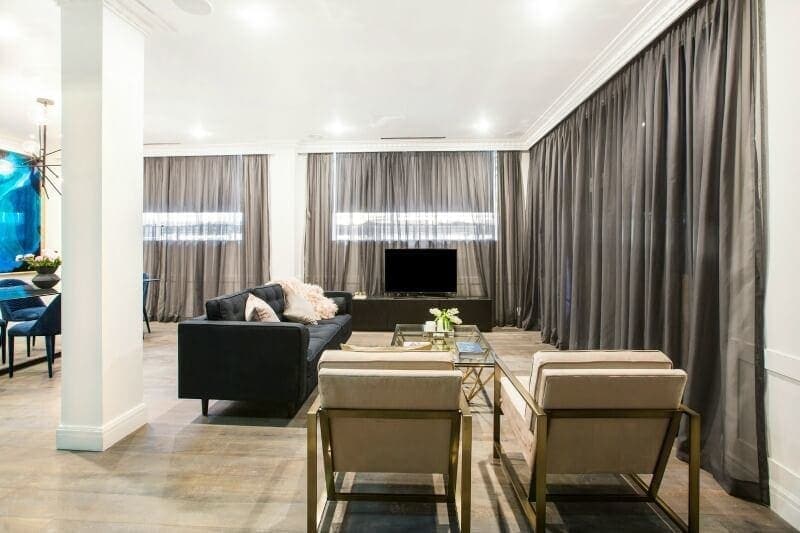 Julia and Sasha’s Living and Dining

Big props to the girls for the base colour palette in this living and dining room. It’s a wonderfully subdued and sophisticated story.

I’m also a huge fan of the furniture selection. I specified that divine coffee table for a client recently on one of my interior decorating jobs, so I was so glad to see it being used here. It’s glamtastic and glorious – and the armchairs are equally stunning.

The sheer curtains – although there’s a lot of them – bring some softness to the space.

I have to ask though, girls (and you know I adore you), but why no rugs in either space? Both feel incomplete, cold and baron without rugs. The dining room especially feels quite cold and clinical.

You also needed some colour in the living room, because the pop of blue in the dining space alone makes the entire zone proportionally off-kilter.

Some really captivating moments here but the space isn’t finished. 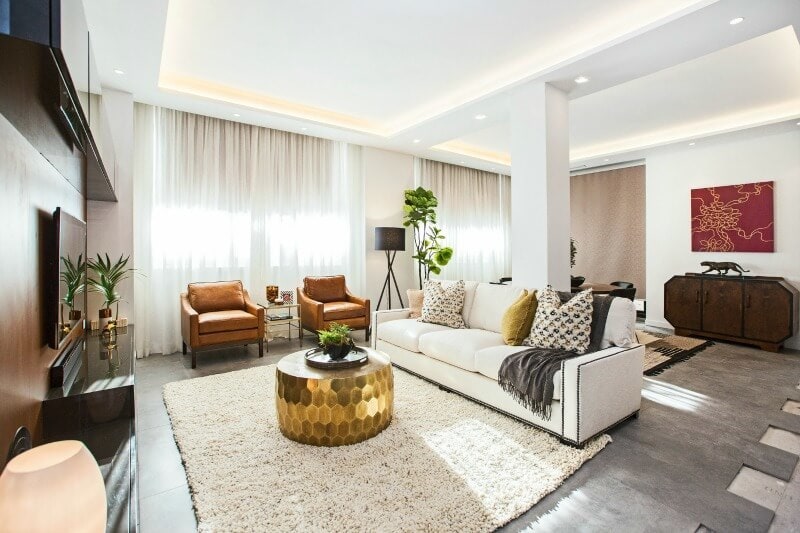 Dan and Carleen’s Living and Dining

Dan and Carleen are back! I can almost forgive that first bathroom disaster and their first guest bedroom fail because this living and dining room is so mind-blowingly on-point.

From the ground up this space is stellar. A wonderful choice of flooring, a successful selection of rugs, an interesting choice of varied furniture pieces that merge new and old with masculine and feminine. And then styled with just the right amount of accessories. I want to live here. I want to live here right now.

The best room so far on the series. There, I said it! 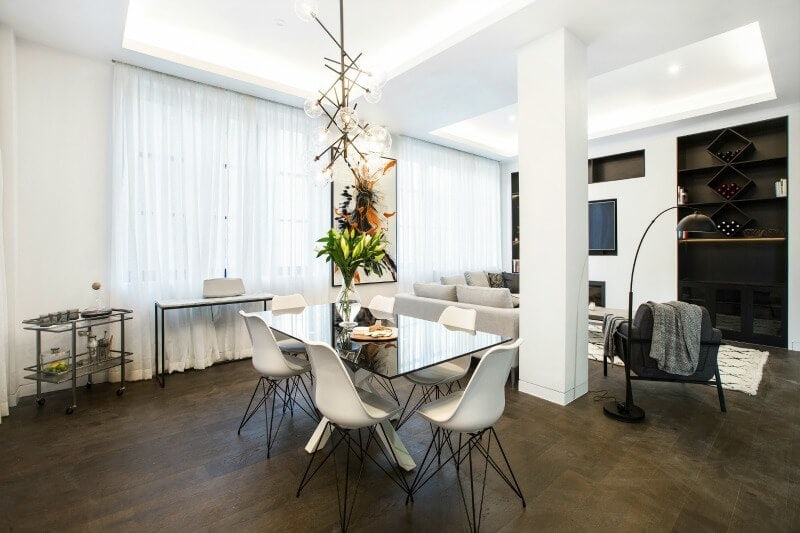 Andy and Ben’s Living and Dining

OK, let’s start with the positives. Andy and Ben seem to be the masters of built-in cabinetry and they nail it every time. I love the built-in shelving around the TV in the living room, and the recessed TV and fireplace were a winner on all counts.

The colour palette is a little boring. I have one eye closed and half my brain is drifting into a snooze.

It seems they are going with a fairly monochromatic colour palette throughout the entire apartment (which is fine), but they need to up the texture and patten or else the whole zone becomes bland. Which is how I’d describe the living room. They should have pulled some orange tones out of the artwork and put some colourful cushions on the sofa at the very least.

The dining room again has me asking: where is the rug? The space feels unfinished and cold without one.

And thank God Neale asked them to stop with the literal references to the building’s history. I’ve disliked every one. 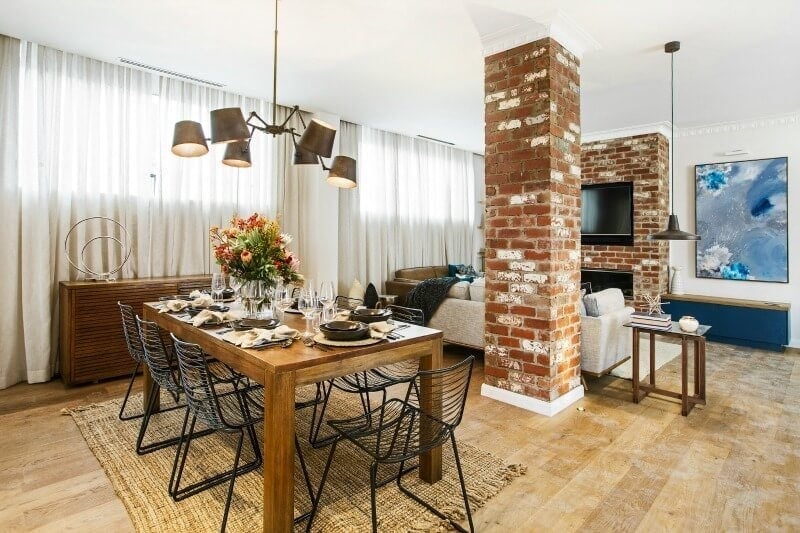 There is a lot going on in this room, and for me the biggest issue that there is too much of the one tone being used throughout. There is an overwhelmingly warm feeling in this space due to all the brickwork, and they’ve made it even warmer by bringing in so much brown furniture.

The living room would have benefited from two grey sofas instead of the leather option they went with.

In the dining room, it’s so black and brown. The rug under the table – if in a lighter colour – could have brought some airiness to the space. The zone feels quite heavy. I also think they went a step too far by completely styling the dining table. It’s very chaotic.

Putting the mirror on the wall in this room was a fail because it’s just repeating all the warmth and heaviness. 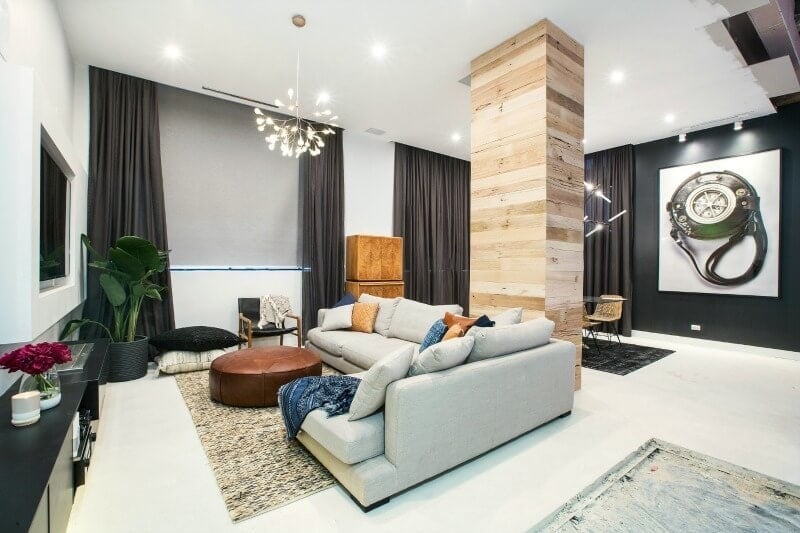 If you took everything out of this space, the shell of both rooms is actually quite beautiful. I love the black wall, I love the flooring (once finished), and the sheer curtains are fine.

It’s kind of everything else that’s not working so well. The biggest issue is that there is WAY too much clutter going on in this space. They’ve tried to create a sense of warmth and intimacy, but instead it needs a declutter expert brought in to halve the items in the space.

The dining table is too small for the space. It actually looks to be a common theme in all the dining rooms. From my experience, a lot of retailers don’t stock eight or 10-seater tables. It’s unfortunate because these dining rooms needed big tables – but clearly The Block’s suppliers don’t carry them.

The column in the middle of the room is also a little odd in this space. Your eye goes straight to it, but not in a good way. They should have done their best to camouflage this, instead of cladding it and making it stand out even more. [/tps_header] 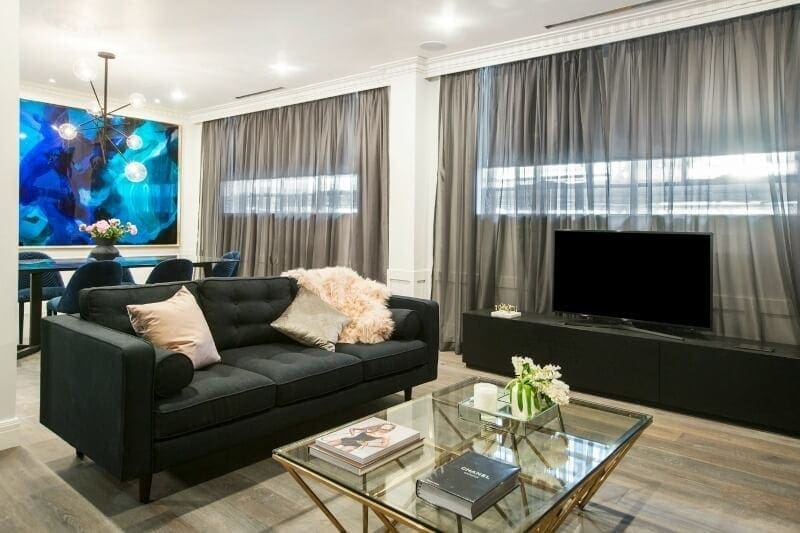 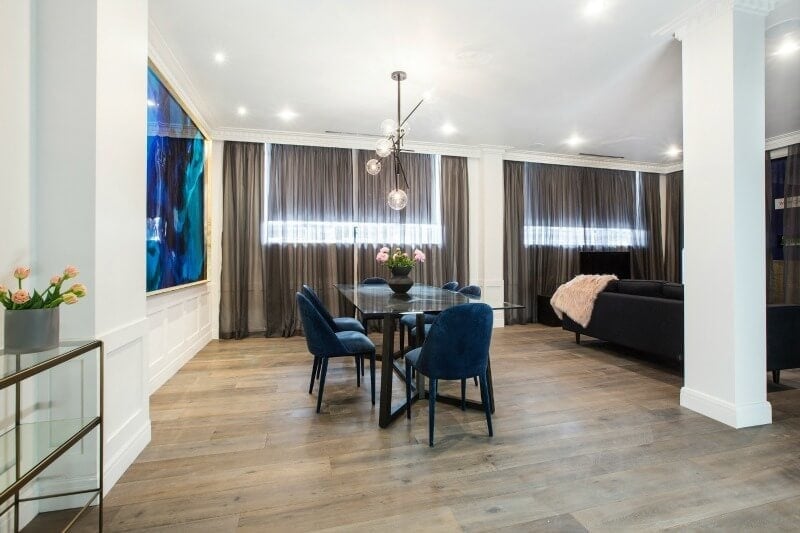 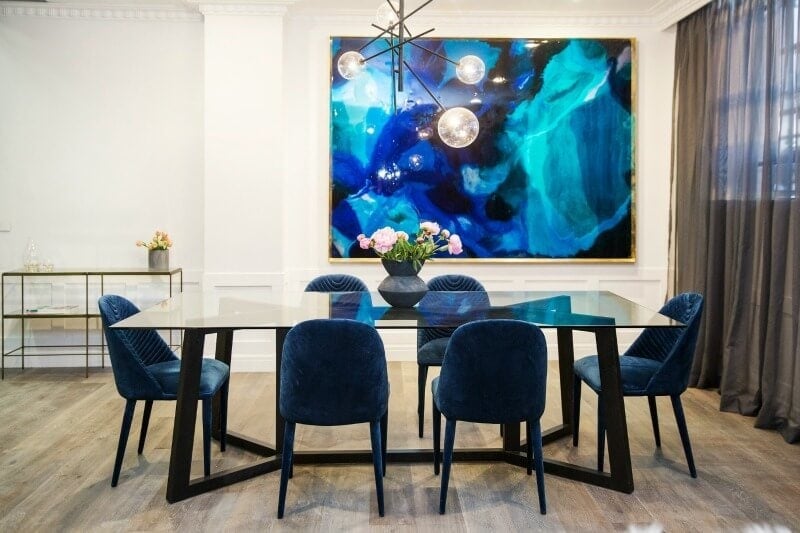 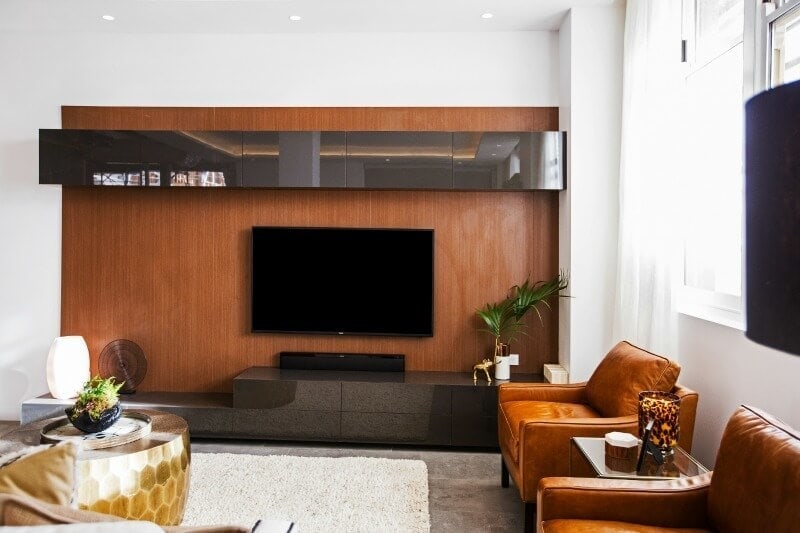 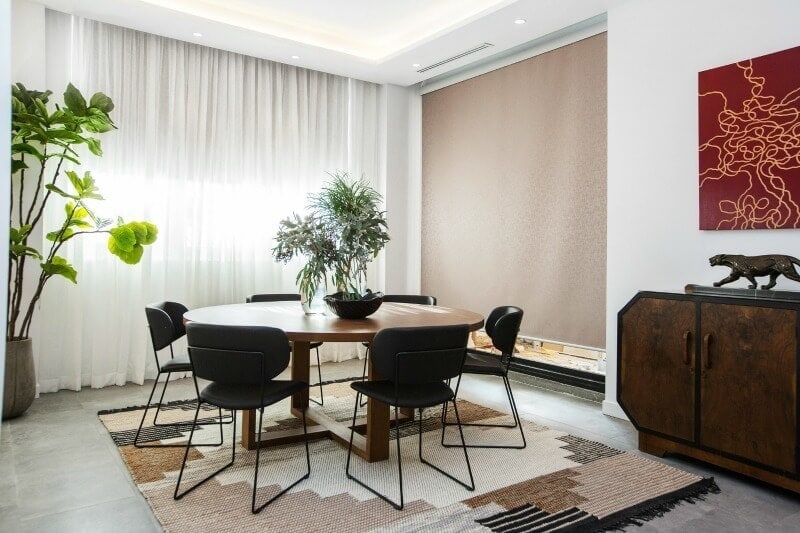 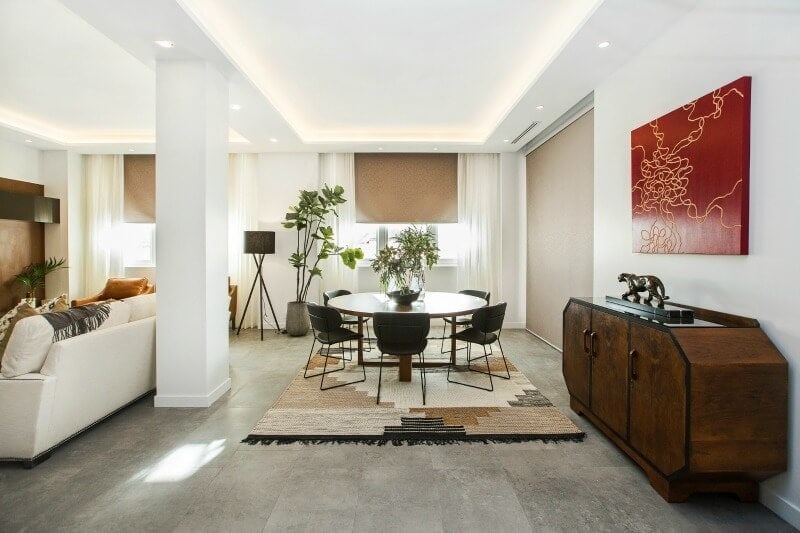 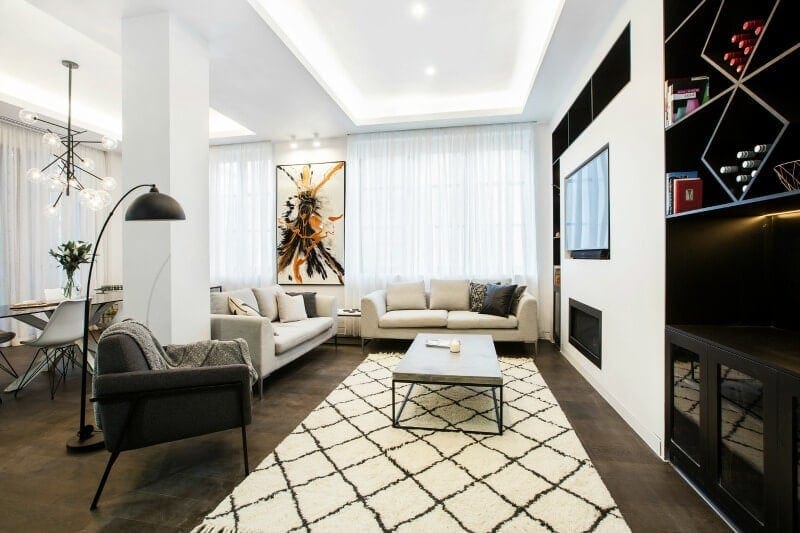 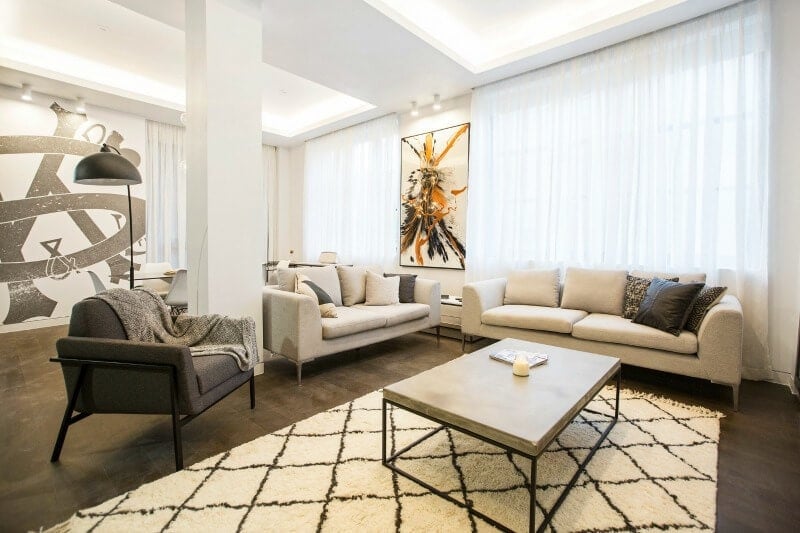 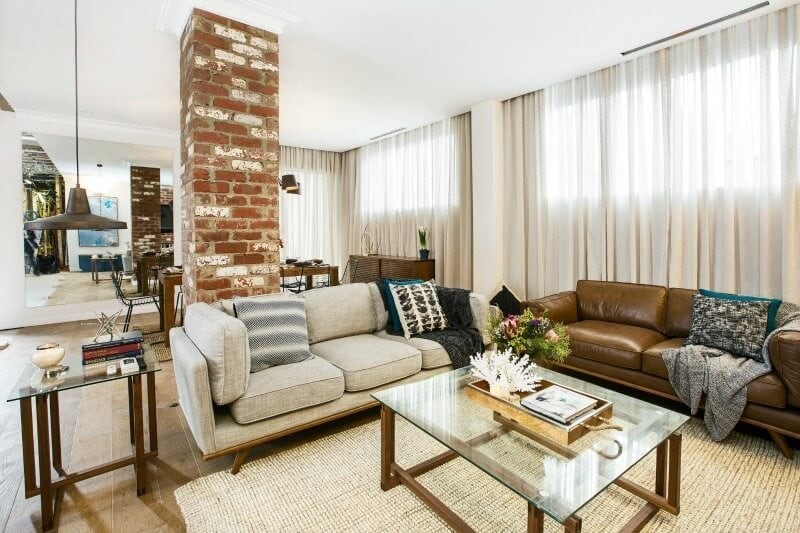 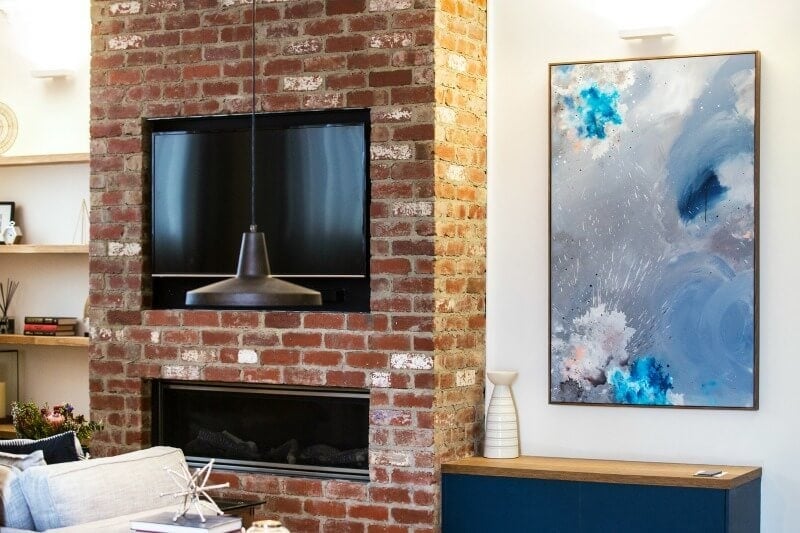 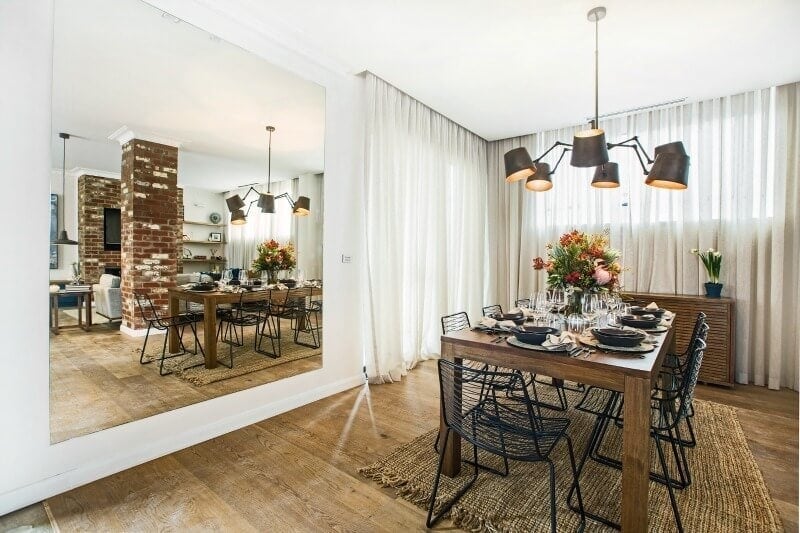 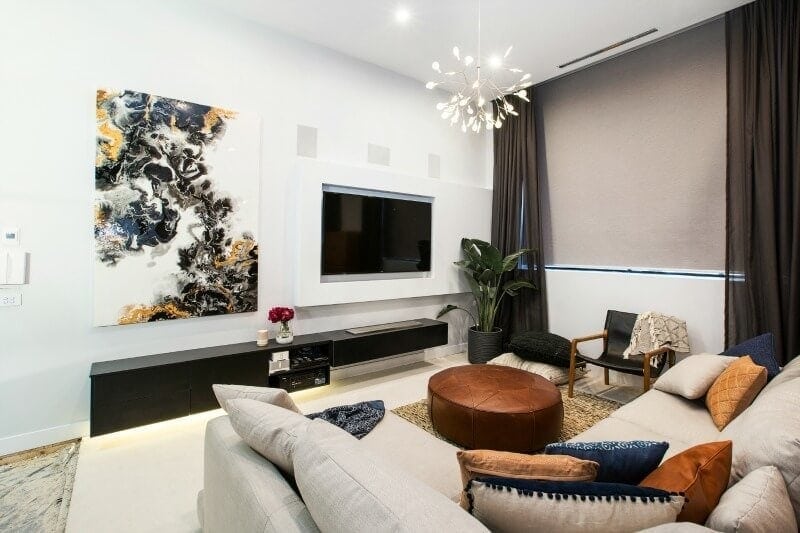 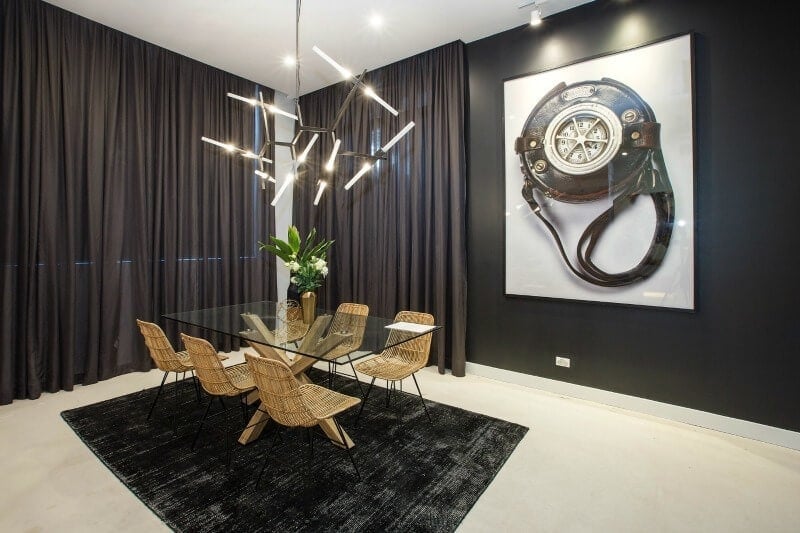 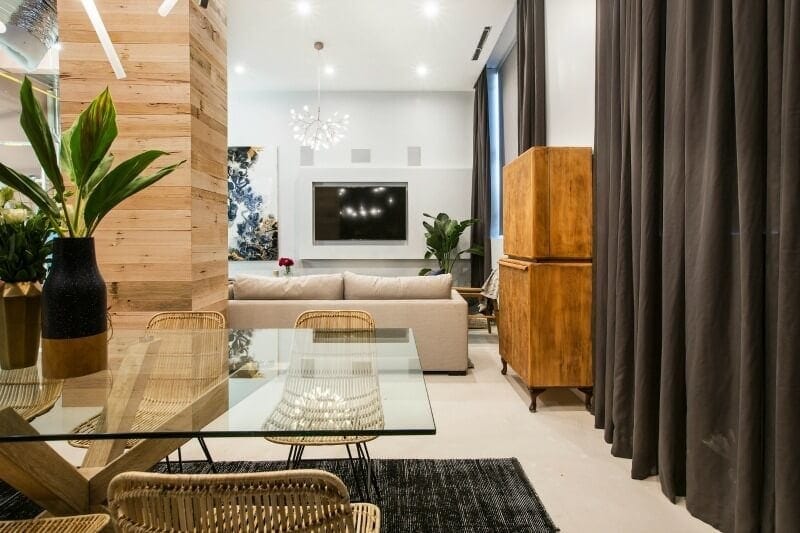 I’ve gotta be honest; I’m disappointed. What do you think of this week of The Block 2016?