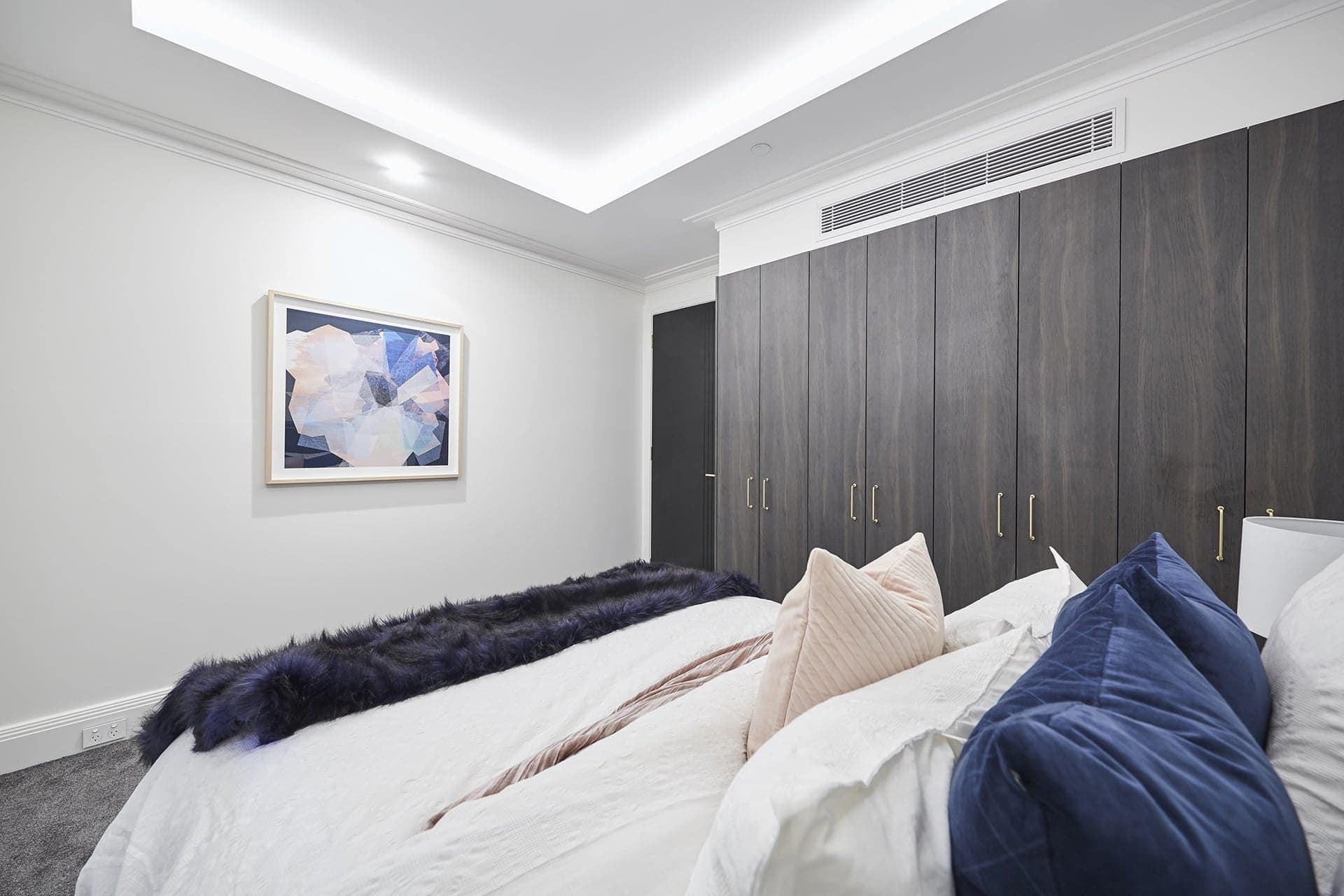 Who knew that the song Killing Me Softly, which I first heard when the Fugees covered it back in ’96, would become the soundtrack to The Block 2018 guest bedroom reveal?

In fact, it’s kinda become the soundtrack to the entire season.

I’ve come to realise that I wasn’t fully prepared for what The Block 2018 had in store for me. I went into this relationship with too much naivety. I was expecting to wet my pants, froth at the mouth, and enter into a state of ecstasy at least four times throughout the series. And it pains me to report that none of those things have happened so far.

Apart from Bianca and Carla’s bathroom at the start of the season, I’ve not had one “call a medic” moment this year. And this is some sad, sad news for us viewers, don’t you think?

Now, I’m not saying that every room has been bad. I think kitchen week, for example, probably produced some of the better spaces. Jess and Norm’s kitchen, as you well know, was a stunner. But outside of that things have been pretty blah. And they are blah for one major reason…

The teams refuse to put colour on their walls.

It was evident this week more than ever, as we were given five rooms that were pretty much exactly the same. White walls, grey carpet, upholstered headboard, repeat. There was barely any point of difference in each room, apart from artwork. Let’s take a look at The Block 2018 guest bedroom reveal below. But I do warn you, they’re pretty much all identical spaces.

Don’t forget to scroll to the end of the post to enter to win a $100 Block Shop Voucher. 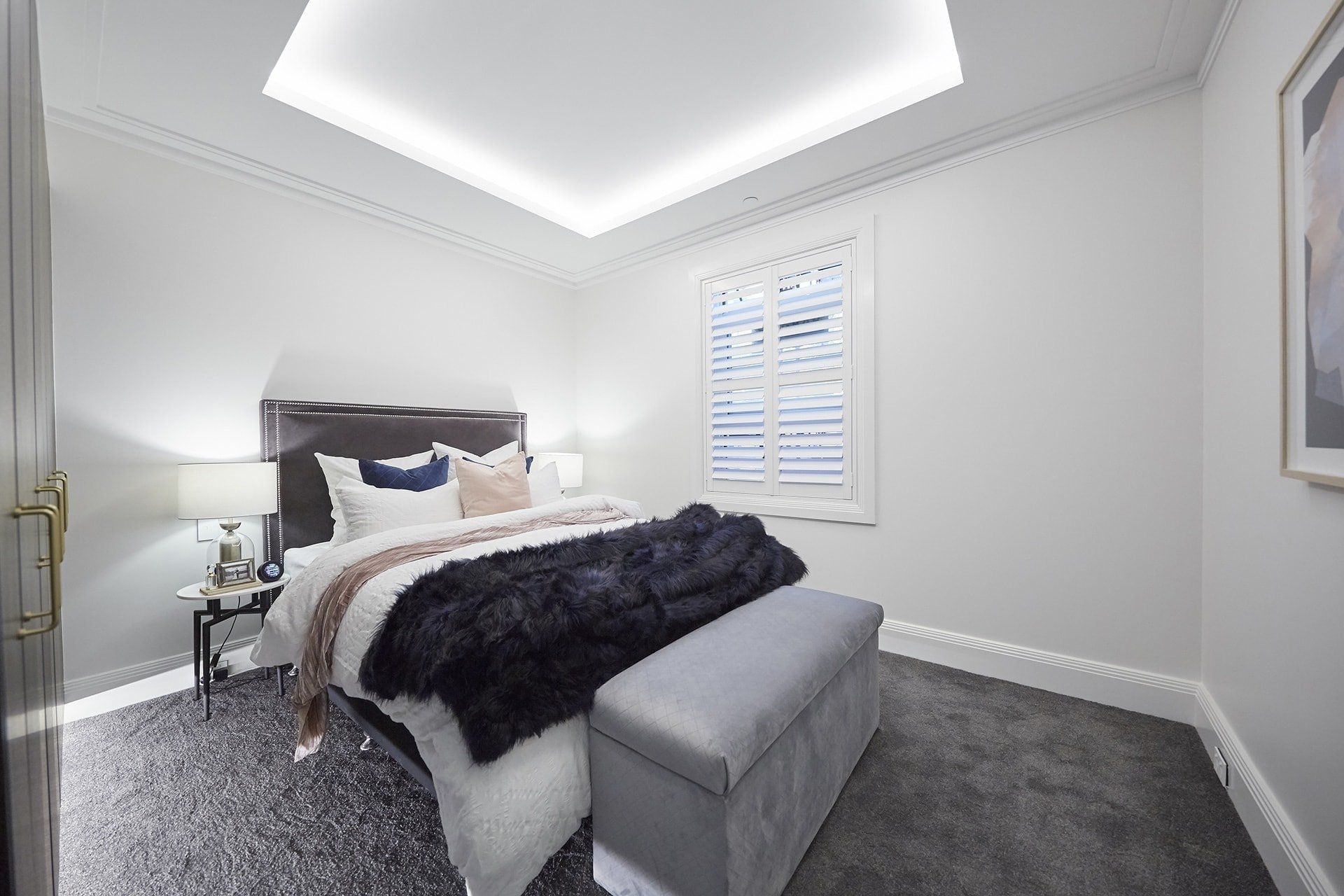 First cab off the rank is Hayden and Sara, who provided a room that is lovely, of course, but boring and predictable for a show like The Block. It looks far too similar to other rooms this series, and almost identical to the other rooms delivered this week.

The gold handles on the cabinetry were a nice moment, so I will call that out as something to appreciate. The couple have been going for a gold-navy-pink palette across the entire home, so I will give them points for consistency. At least the approach to colour is cohesive here. You’d walk through the home and all the rooms would make sense side-by-side.

Outside of that, there’s not a whole lot more to compliment. The bedside tables, which I do adore, are the same ones used in another room weeks ago by Hans and Courtney. So there was zero element of surprise and delight there. I don’t mind the lamps, actually, but had they been placed against a coloured wall they would have popped more.

I find this room quite cold and uninviting. It has very strong “we’ve just moved in” vibes.

These are the kinds of rooms clients show me in their homes, telling me the space doesn’t feel finished, doesn’t feel cosy. I understand this is essentially a home staging competition, so we don’t want to be too daring with design. But for all of the teams to deliver rooms that look the same raises real issues for me in terms of what their knowledge of decorating is. Narrow, to say the least.

Or have they been warned against doing anything bold? 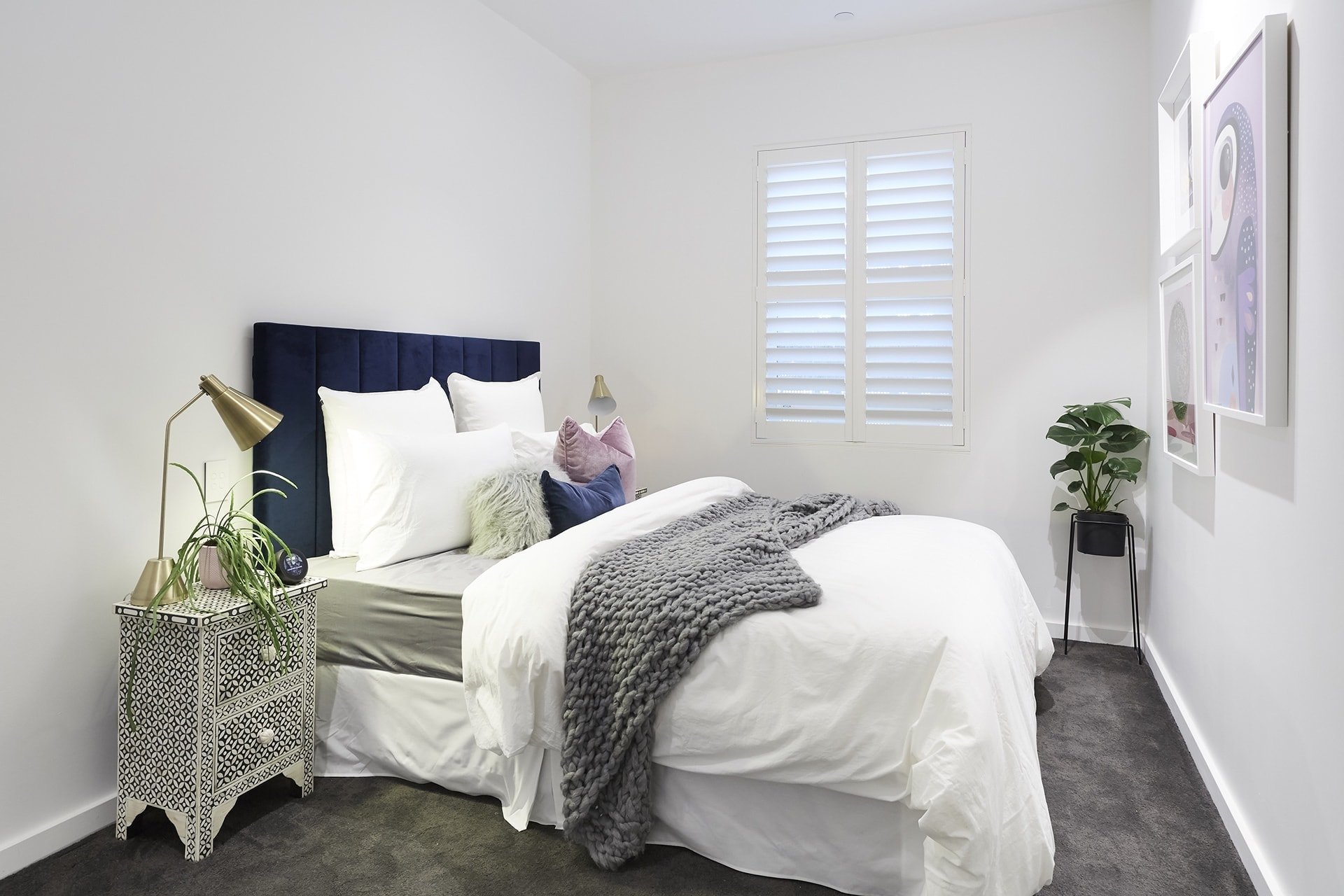 The second room to deliver white walls, grey carpet and an upholstered headboard was that of Hans and Courtney. And it raises a serious question for me, that maybe you have the answer to (because I certainly don’t): Why were all the apartments carpeted exactly the same?

Was this something the contestants got no say in at the beginning of the series? If so, they need to amend that approach next year, because it’s resulted in a real lack of design diversity between apartments.

Let me know in the comments below if you can. I’d love to find out if the white walls and grey carpet in every apartment was a decision the contestants had no say in.

This room has some nice moments as well, but they are really quite expected. I mean, I love the pot plant stand. I love the headboard. The bedside tables and lamps are cute. But that doesn’t mean the room isn’t boring. Because it is.

There is no life here. No charm. No warmth. It too is cold and clinical. And I really hope next season brings wallpaper back into the fold. Because these white walls just suck. There’s no other way to say it.

I have nothing more to say about this room. Sorry about it. 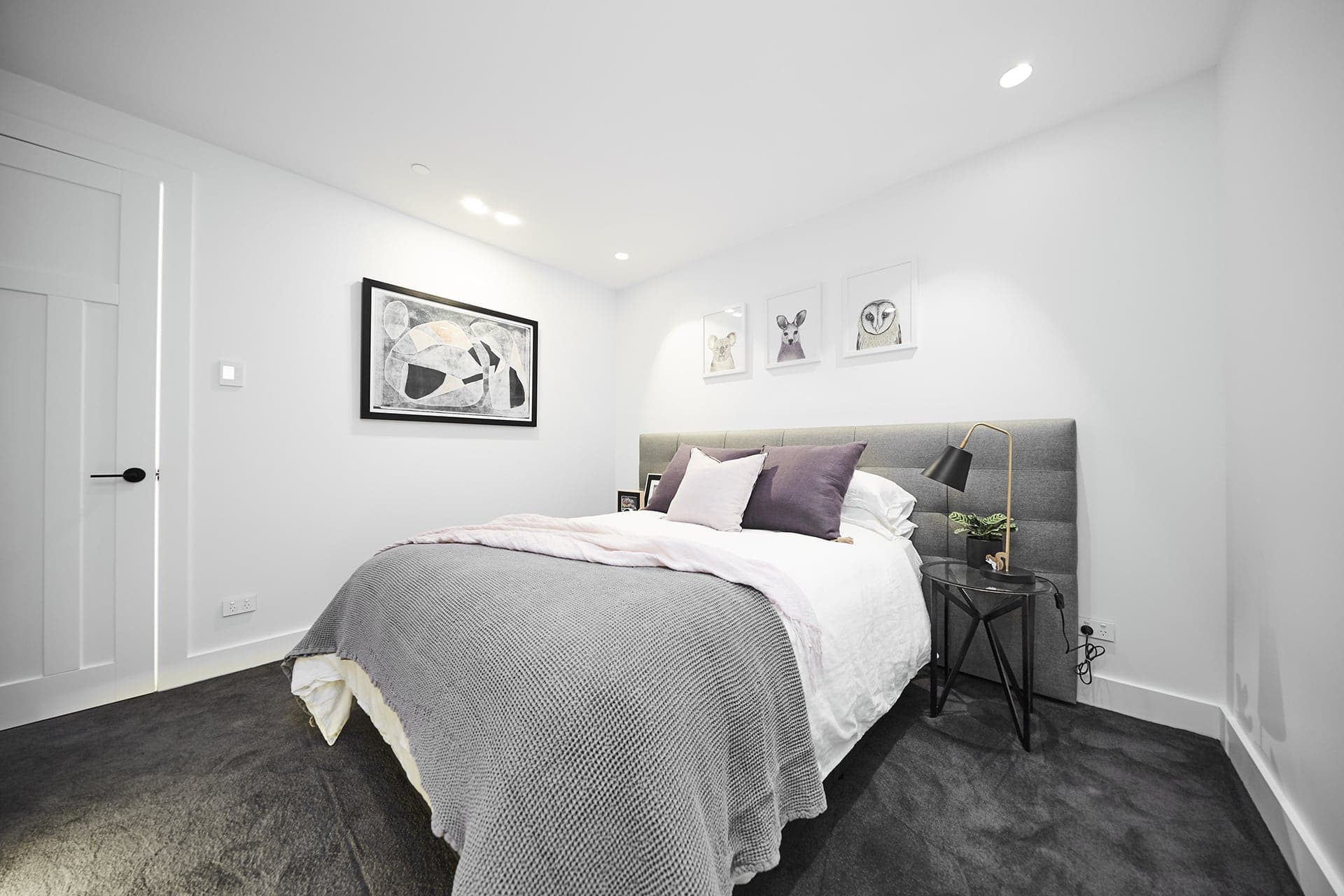 You guessed it: Kerrie and Spence also delivered a guest bedroom with white walls, grey carpet and an upholstered headboard. This is going to be the fastest Block recap I’ve ever written. There’s literally nothing new to say as we move our way through these spaces.

What I will say though, is that those artworks above the bed are so random and inappropriate for a guest bedroom. They are straight out of a kid’s room and I have no idea why Kerrie and Spence felt the need to include them here. The larger artwork on the adjacent wall is stunning though. I do love it. But it’s not enough to save yet another boring, cold and sterile room.

Bedside tables are the standout piece for me in this space. I’m smitten with those. But apart from that, this old Torana is fresh outta gas.

May I ask why none of these rooms have rugs? A few of them are large enough to take one. And it would have broken up all that dark grey carpet. 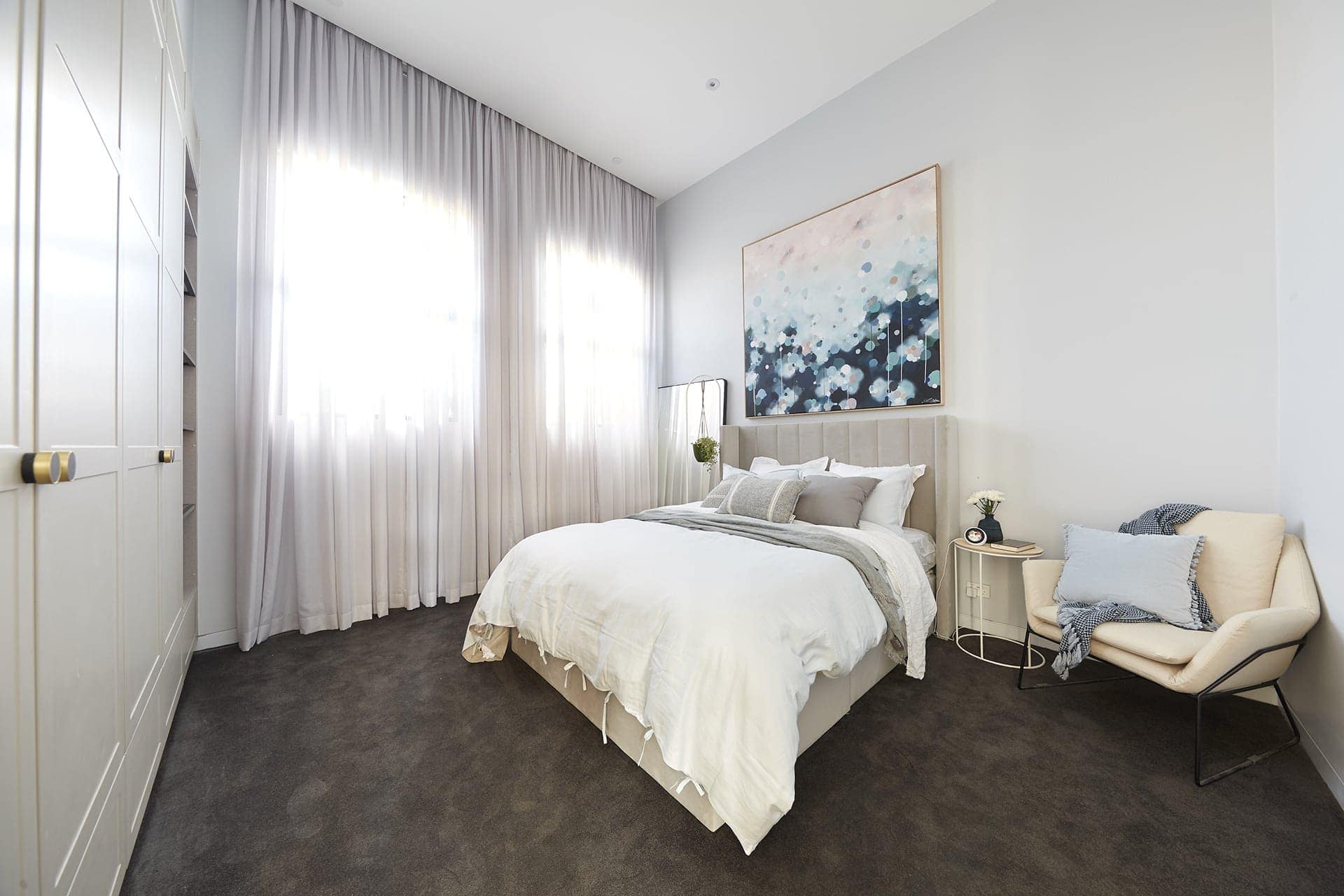 I don’t know if I can go on. At this point I think I need to go have a Bex and a good lie down and let you write the rest of this recap yourself.

The fourth bedroom given the white wall, grey carpet and upholstered headboard treatment was Jess and Norm’s. They are probably the second-best team this week though. If we’re comparing who can elevate the look of a white room with mere styling alone.

We have a nice armchair. I do adore it. Though it feels quite stuffed into that corner. So it’s not right for the room. The bedside tables I also love. Very chic, very Scandi, I’m all for it. Though placing them in front of exposed power points doesn’t say ‘luxury apartment’ to me.

The scale of the room is quite off here. I know it’s a small room with tall ceilings. But they put way too many pieces on the one wall and it’s only made the room look smaller. Jess and Norm should have ditched the mirror and the wacky plant stand (along with the armchair) and popped in two larger, more formal-looking bedside tables.

Also, where are the pendants in these bedrooms? I know they’re guest rooms, but that doesn’t mean we can’t have an awesome moment of lighting. Even in the centre of the room if not above the bedsides.

The artwork above the bed is absolutely magnificent though. I have to call that out. I feel like the artwork is doing a lot of the work to make this room appear more stunning than it is. 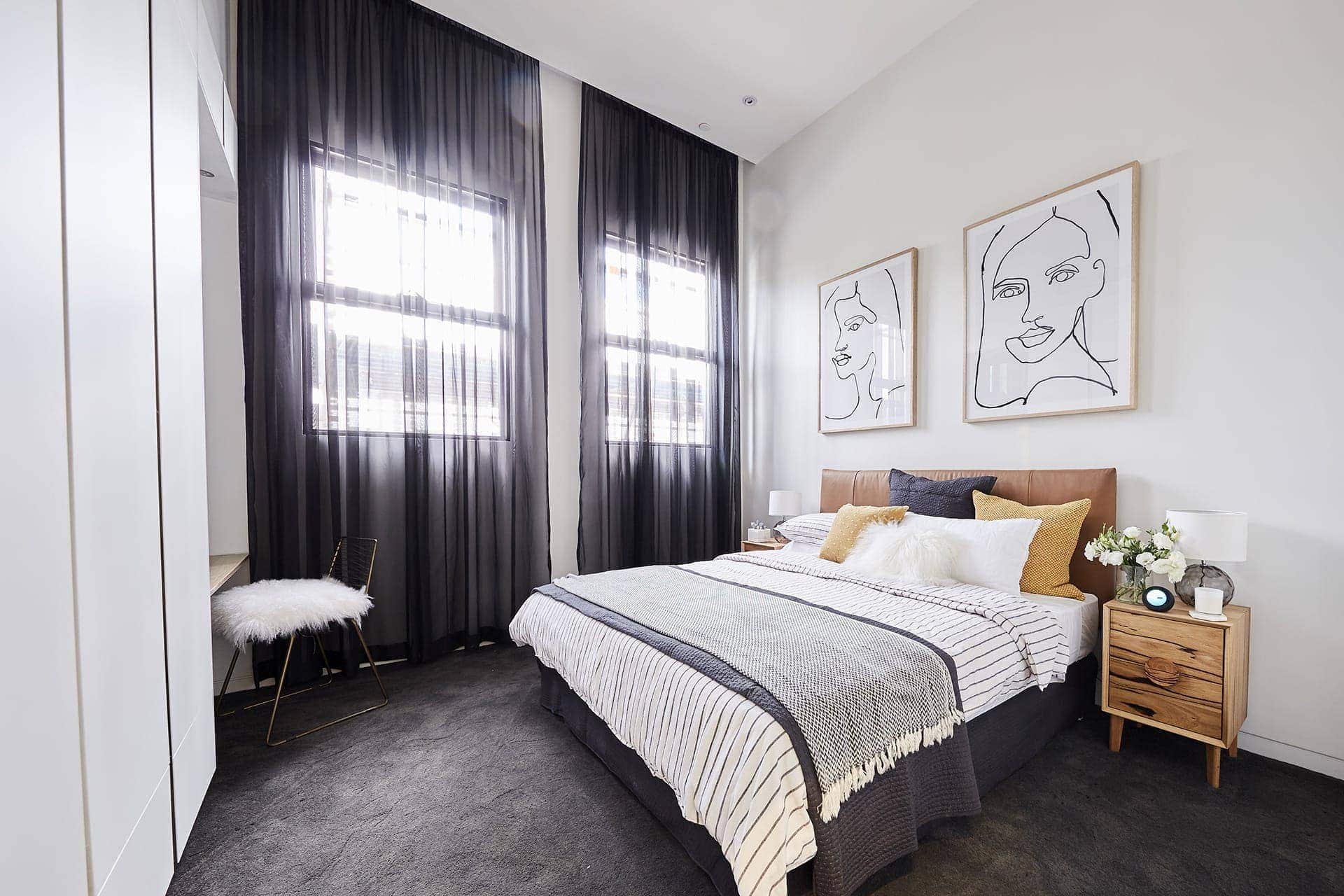 I gotta give my girls one thing: at least they have a headboard that’s upholstered in leather. We have a different material outside of velvet here. Praise be to the gods of decorating!

Of all the rooms in The Block 2018 guest bedroom reveal, this one is hands-down my favourite. Once again I knew it belonged to Bianca and Carla. It speaks stylistically to the other rooms in this apartment, and at least we have some interesting texture and pattern going on in the space.

The dark sheers were a bold move in the other pockets of this apartment, and they’ve continued them here. I’m not sure I love them, but at least they’re not white. That’s where I’m at this year in terms of praise: you get it if you avoid white!

The bedding, for starters, isn’t plain white, so we’re onto a winner there. There’s no velvet in the room either. If I see velvet cushions one more time in these apartments I think I may end it all. And lastly, the art in this room is the most interesting of all five spaces. I really like it. Ditto twofold the bedside tables.

One thing that made be super disappointed was that Bianca and Carla ditched the dark feature wall in their master bedroom during re-do week. And here, they’ve clearly gone in the blander direction the judges have pushed them toward. What a shame they didn’t throw caution to the wind and experiment more.

Remember when The Block had big feature wall moments? It is so sad to see those days done and dusted. I’m going to pop a photo below of Will and Karlie’s space back in 2016 just so you can cast your mind back to the calibre of spaces we’ve been delivered before. We need this brought back next year.

That said, Bianca and Carla deserved the win this week. If only they were permitted to push things further. 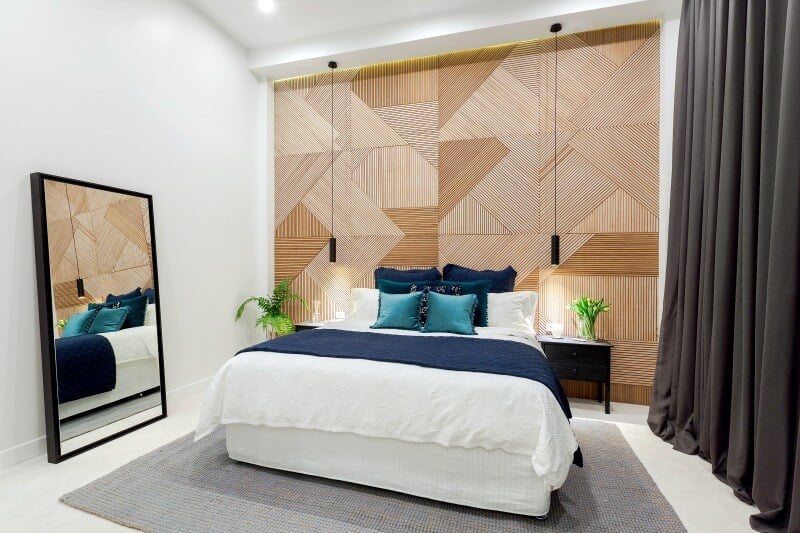 Every week I’ll be giving you the chance to win a $100 voucher for The Block Shop. The winner will be announced in next week’s Block recap (right here on the blog), where you can then enter again to win. Repeat each week until the end of the season. How exciting!

TO ENTER TO WIN THIS WEEK:

Simply pop a comment below telling me what you thought of The Block 2018 guest bedroom reveal. It’s that easy!