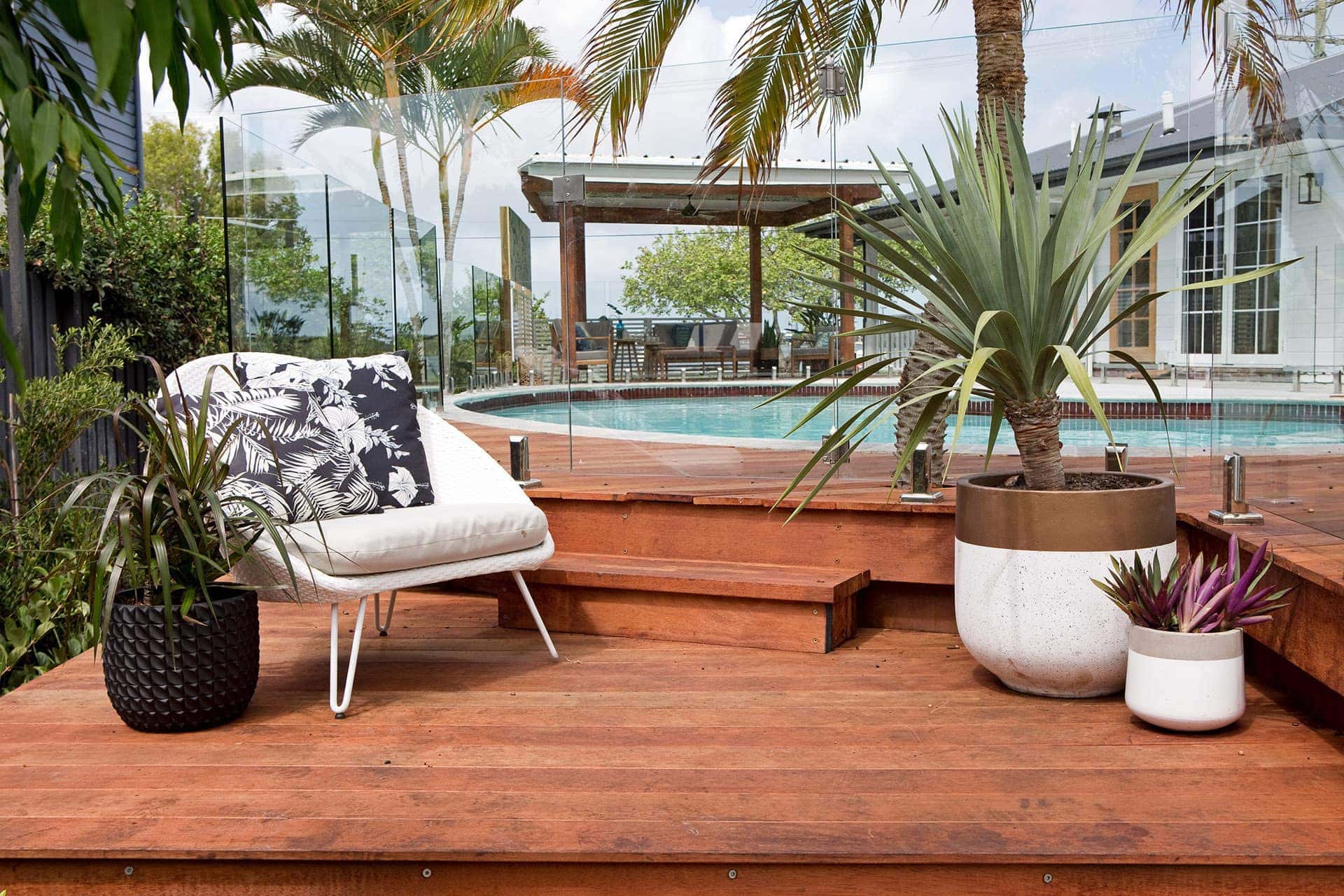 I’ve gotta declare this before we go any further: backyard week is my least fave week of House Rules. Knowing it’s going to continue until next Sunday night is driving me to comfort eat. That’s this week’s excuse for carb loading and I’m sticking to it. It’s all House Rules’ fault.

The last time I was genuinely excited to go outside was the Christmas of ’89 when my parents told me Santa had left a trampoline in the backyard. Since then, outdoor zones often fail to float my boat. And this week’s House Rules episode did little to change that.

But we must push through, mustn’t we? So let’s strap on our thongs (the footwear, not the G-bangers), slap on some sunnies, and head outside to critique the House Rules 2018 backyard reveals (part one!). 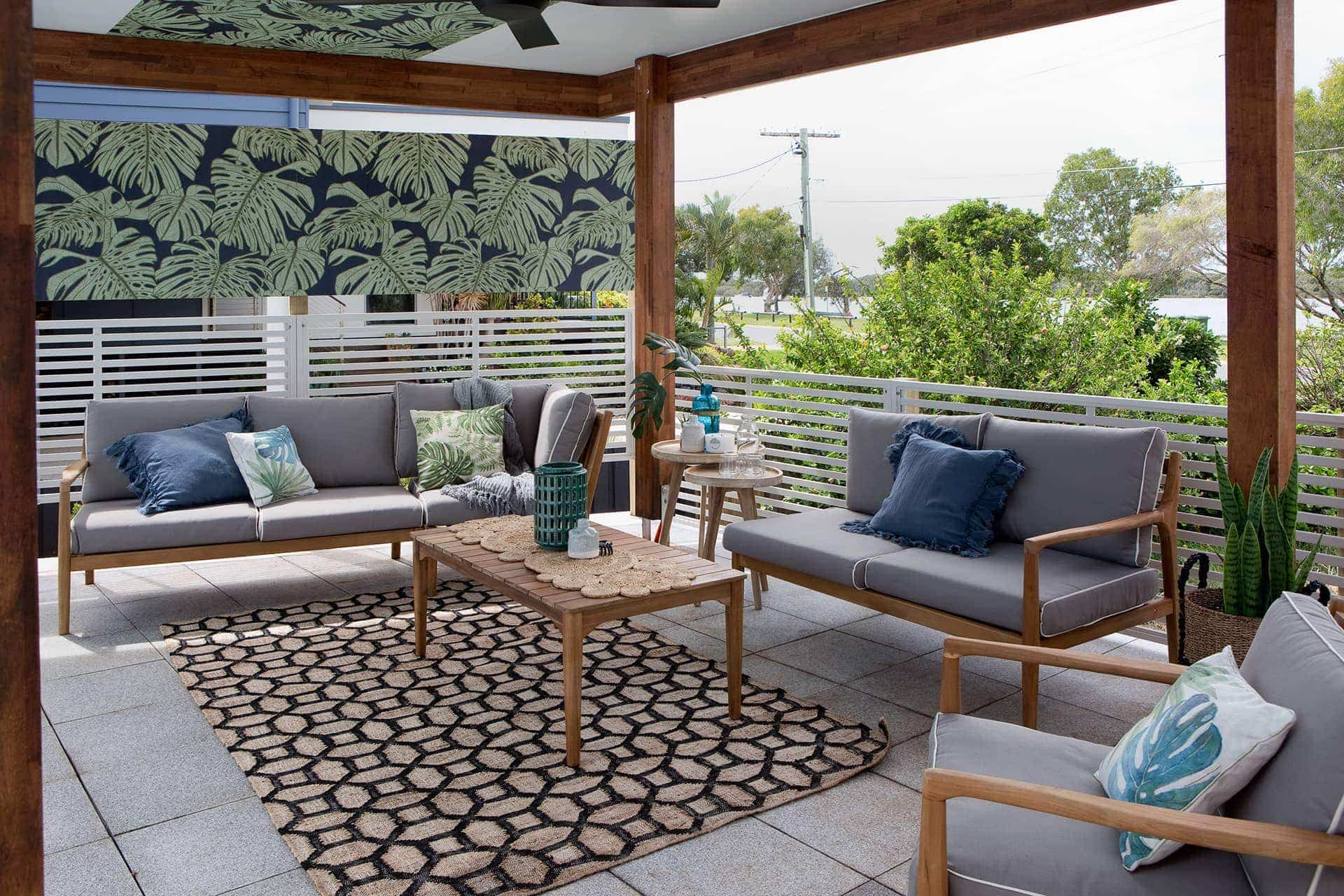 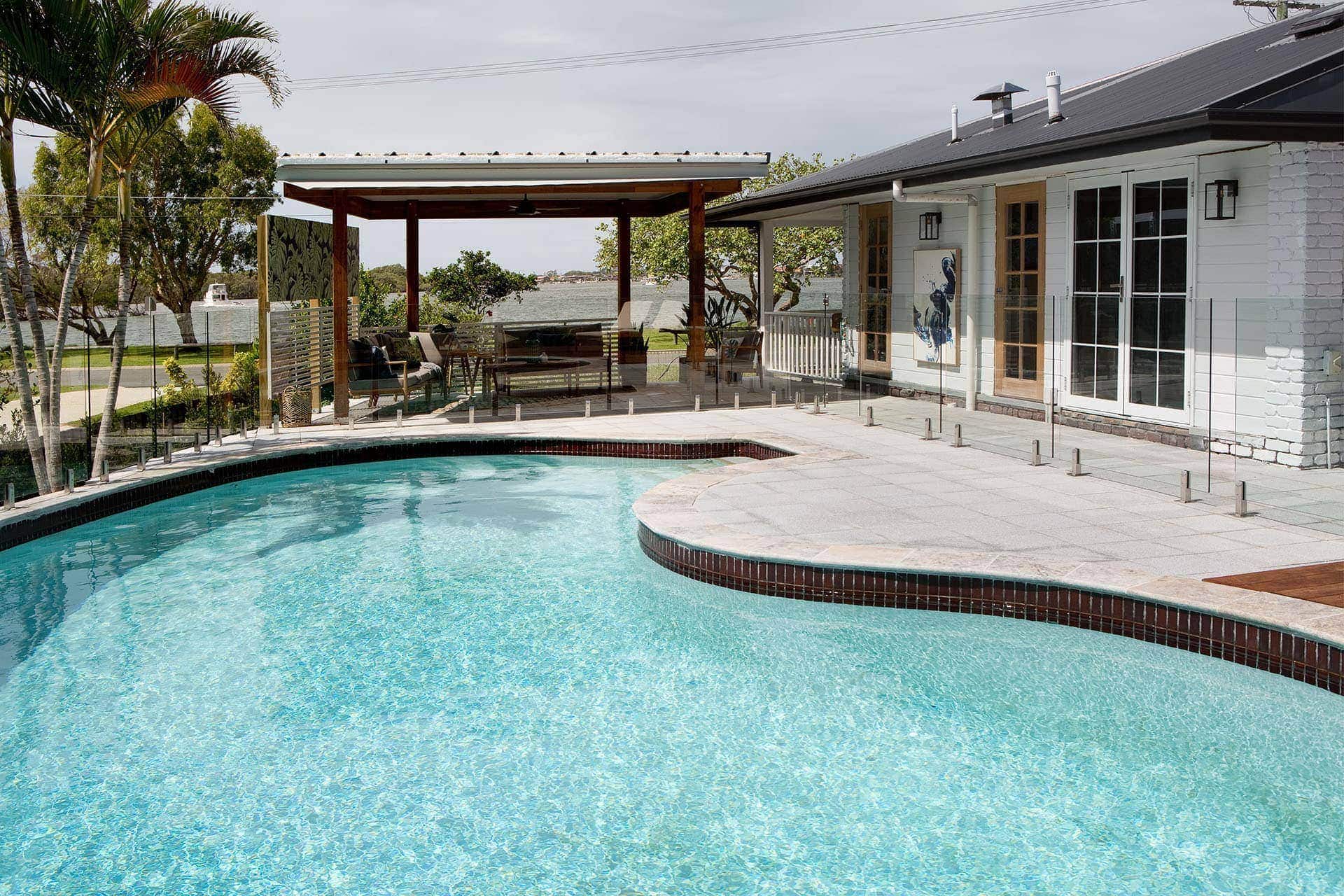 Toad and Mandy worked on Mel and Dave’s Pool Area

Some of the seating areas this week were a little bland, but Mel and Dave’s wasn’t one of them.

I mean, sure, the rug could have been larger to really ground the zone properly, but it’s a quaint little outdoor area. I’d happily knock back a few Savvy B’s here while admiring the pool.

The one WTF moment, of course, was that artwork hung on an external wall. This is internal art and it has no place outside. It stands out more than a guy on the beach wearing budgie smugglers. You know the ones; nothing about their body suggests a Speedo is appropriate. But good on them for the body confidence.

Sidenote: I kinda wanna live on Mel and Dave’s street. Looks like they have a phenomenal view of the water. Added bonus: they could hire me to come in and design them a real Hamptons home. It’s a win-win. 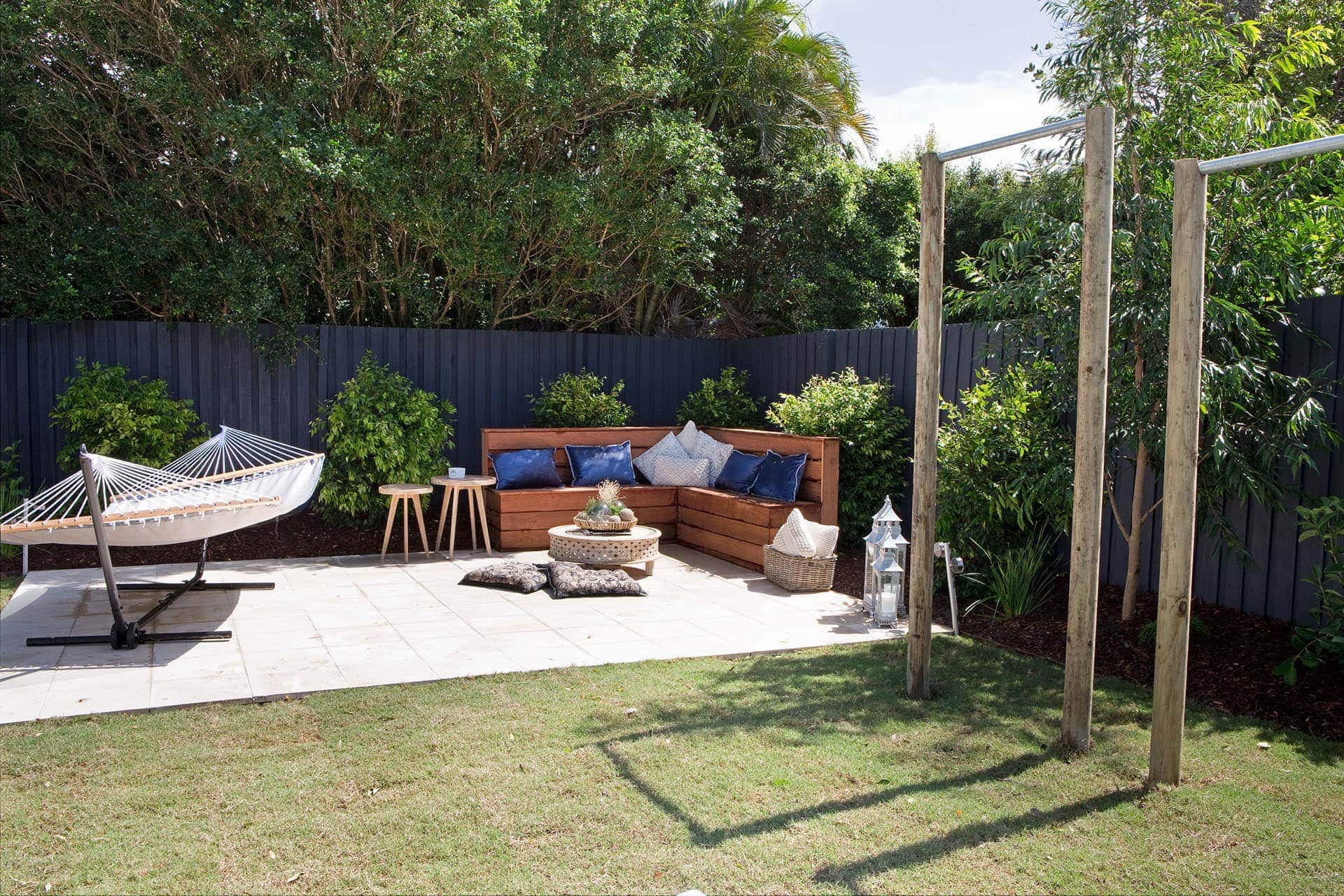 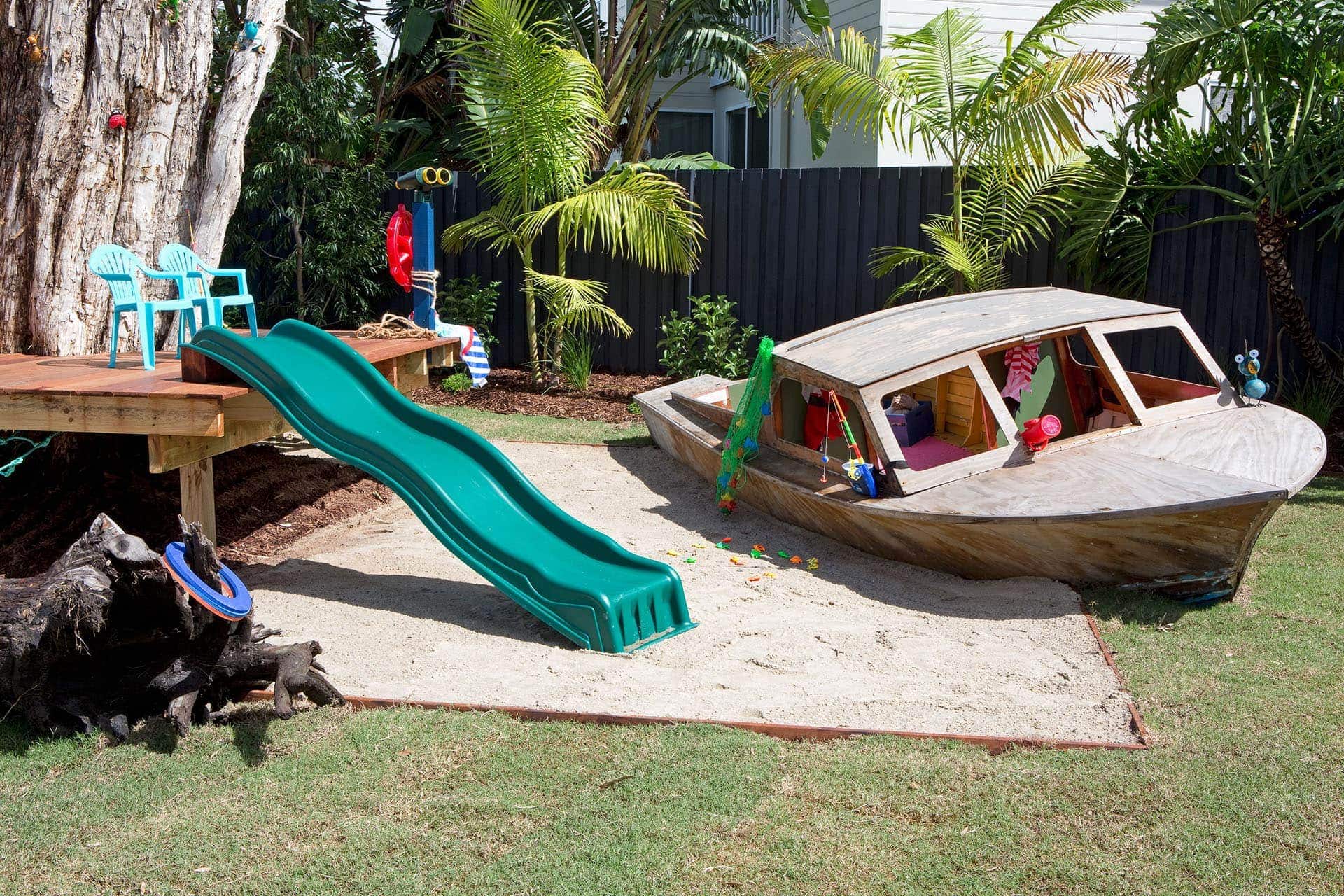 Kim and Michelle did Mel and Dave’s other Pockets

Kim and Michelle were to deliver Mel and Dave a haven for body and soul. Which is an odd request, all things considered. I mean, this is a backyard. What were they meant to do: build them a Thai dayspa complete with a masseuse whose hands always go just a smidge too close to your unexplored nooks and crannies?

I speak from experience on that one, btw. One finger always manages to caress a zone it’s not meant to, doesn’t it? But anyway, enough about my horrific massage visits!

The haven for body and soul Kim and Michelle designed was a little lacklustre. I suppose I would have channelled some Zen design elements here and gone down a Thai route. They could have built a giant daybed to lie back on with built-in tables for drinks. Shade the area, install a beautiful water feature that gave you the feeling you were somewhere else.

I would have liked to see the boat painted though. This could have been a nautical area with a blue and white theme. As it stands, it’s a nice foundation but not a lot of design or decorating here to take it to the next level. 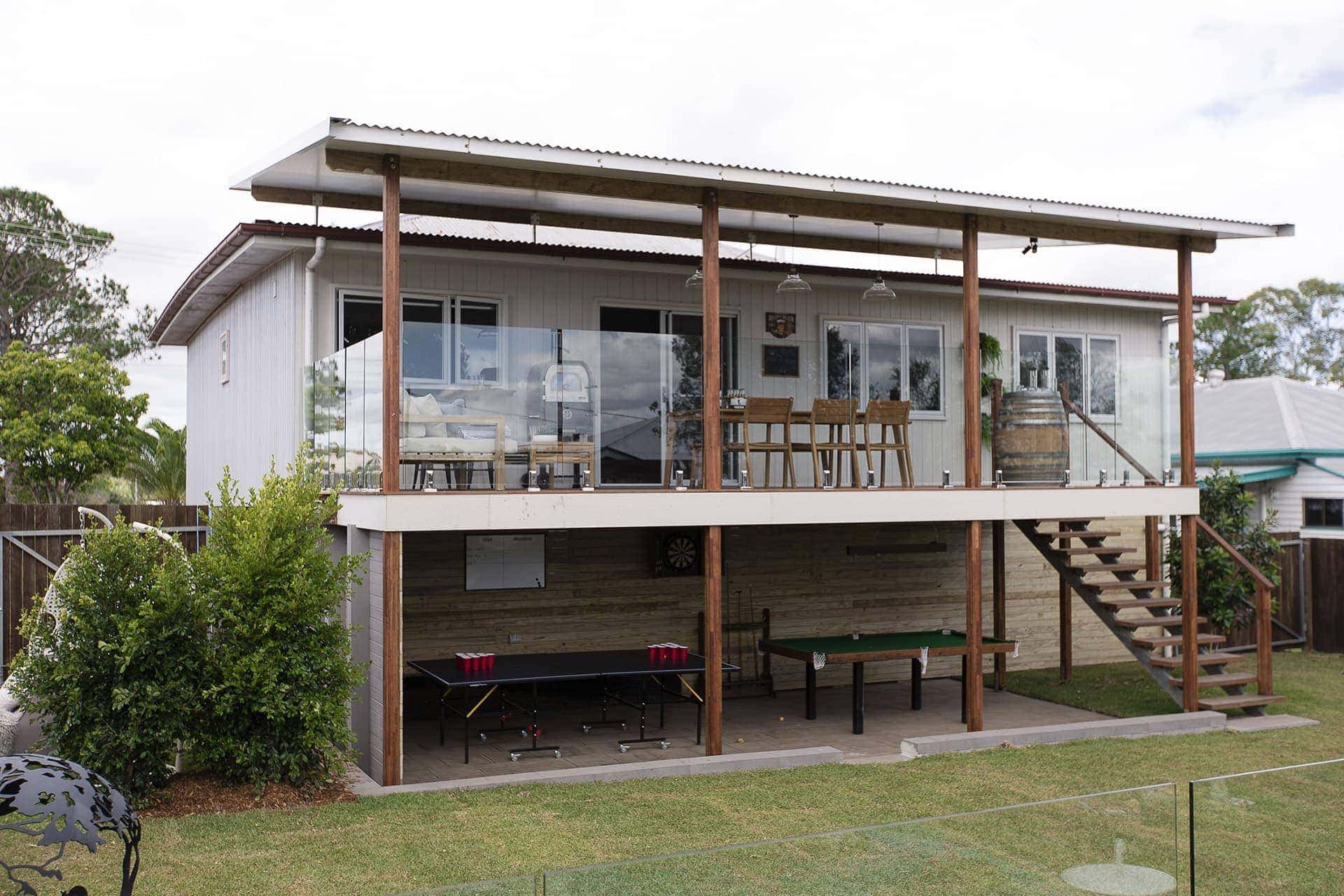 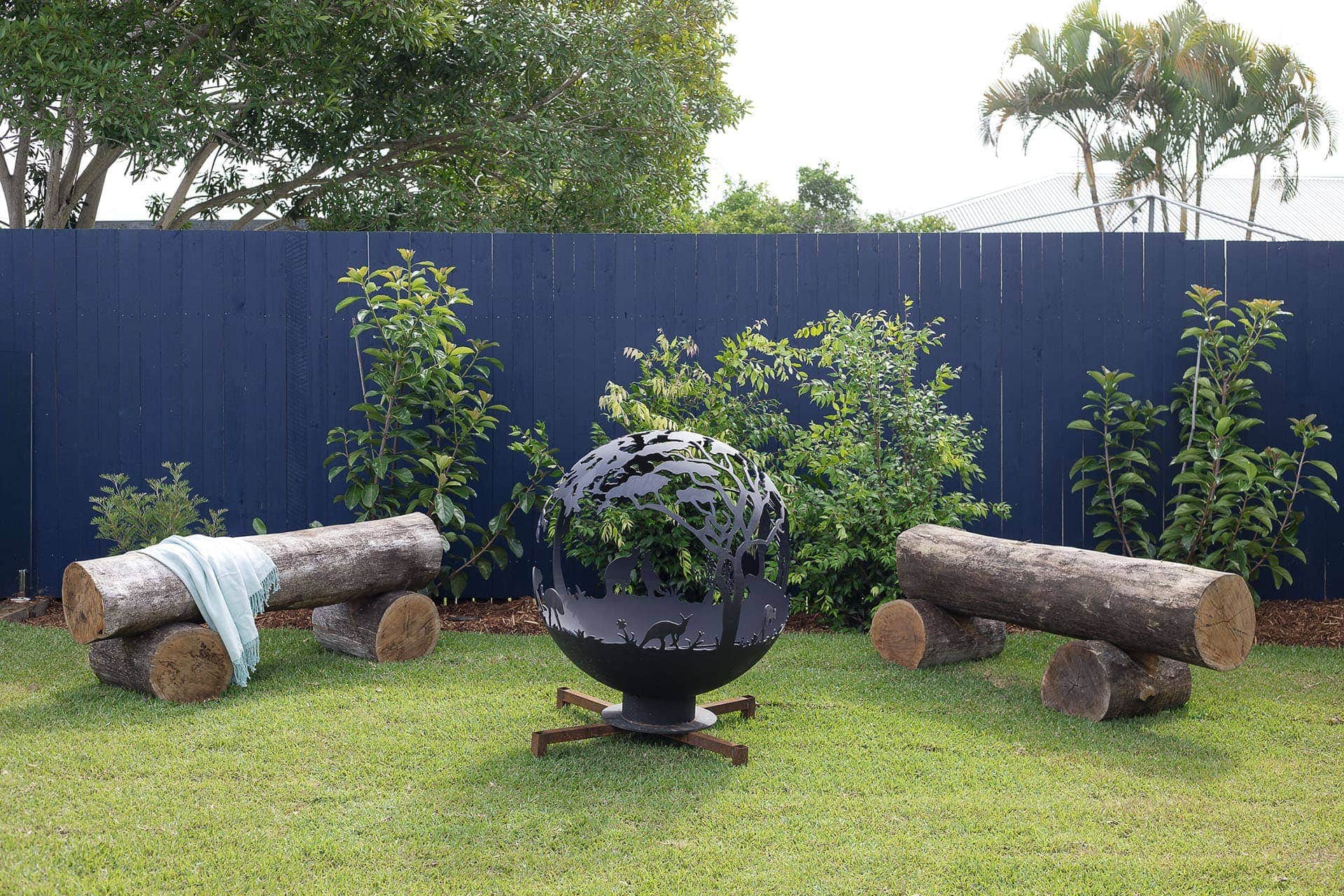 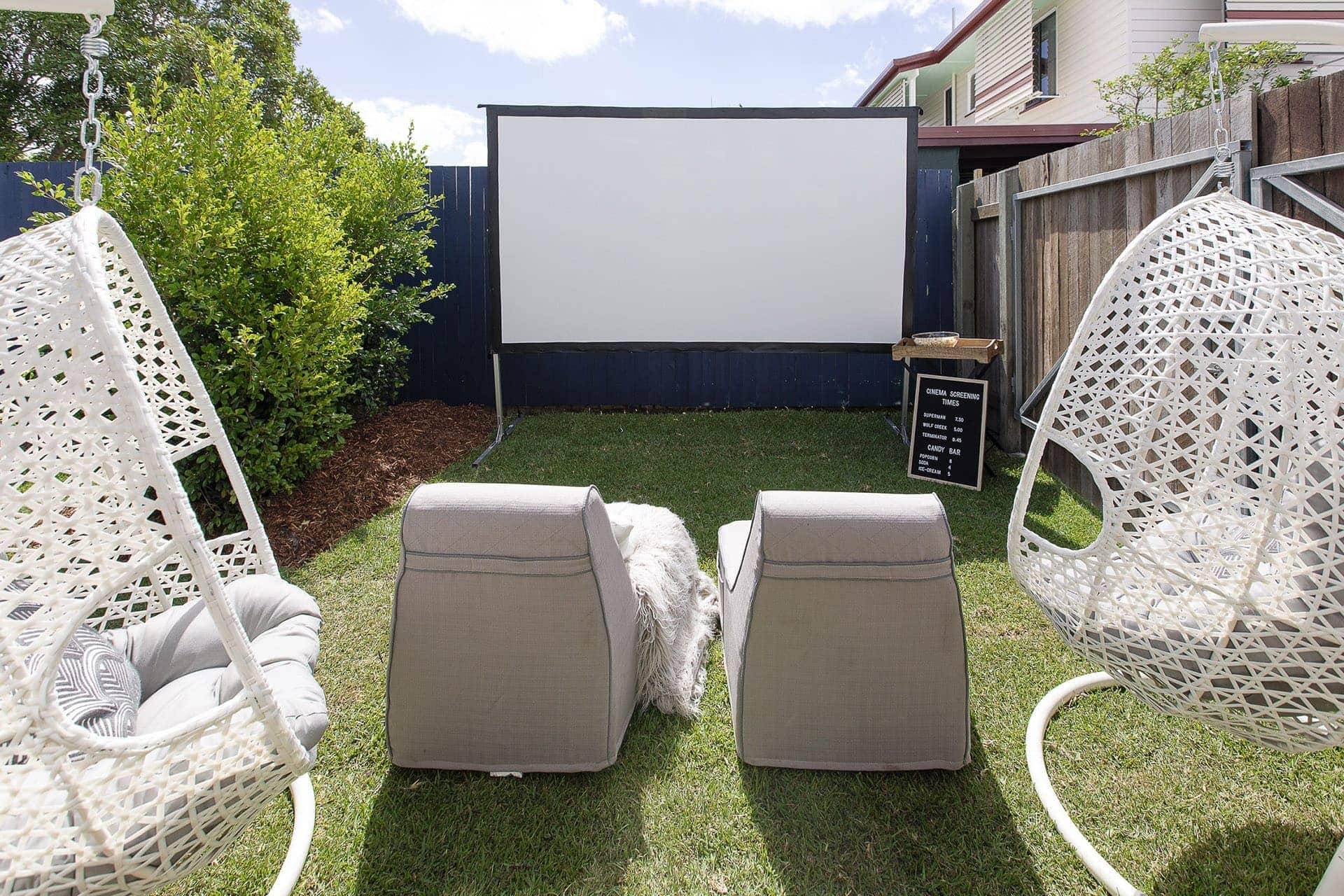 I know Josh and Brandon are 21, but do we really have to give them a keg party backyard? I feel the only things missing from games zone are beer signs, girly calendars, and a few topless waitresses carrying beer bongs.

In fact, upon closer inspection there is a beer sign in the zone upstairs. Ick. Talk about an absolute cliche. I have nothing against drinking, or beer, or a zone for entertaining. But to head down the most obvious route here is just lazy.

And some small things just made no sense. Like the dart board on the wall bedside the pool table. You’re asking for trouble here. Someone is going to take a dart to the head while trying to sink the eight ball.

Now, I love the idea of an outdoor cinema. Nothing would be better than a summer’s night with a wine in hand, kicking back to watch something like Wolf Creek so your neighbours would have nightmares for days.

But the cinema zone Jess and Jared delivered was a half-baked attempt. It’s just four seats plonked on some grass in front of a projector screen. It almost looks like a punishment zone for kids when they misbehave in the pool.

The fire pit area with one indoor throw draped over an enormous hunk of wood was odd too. 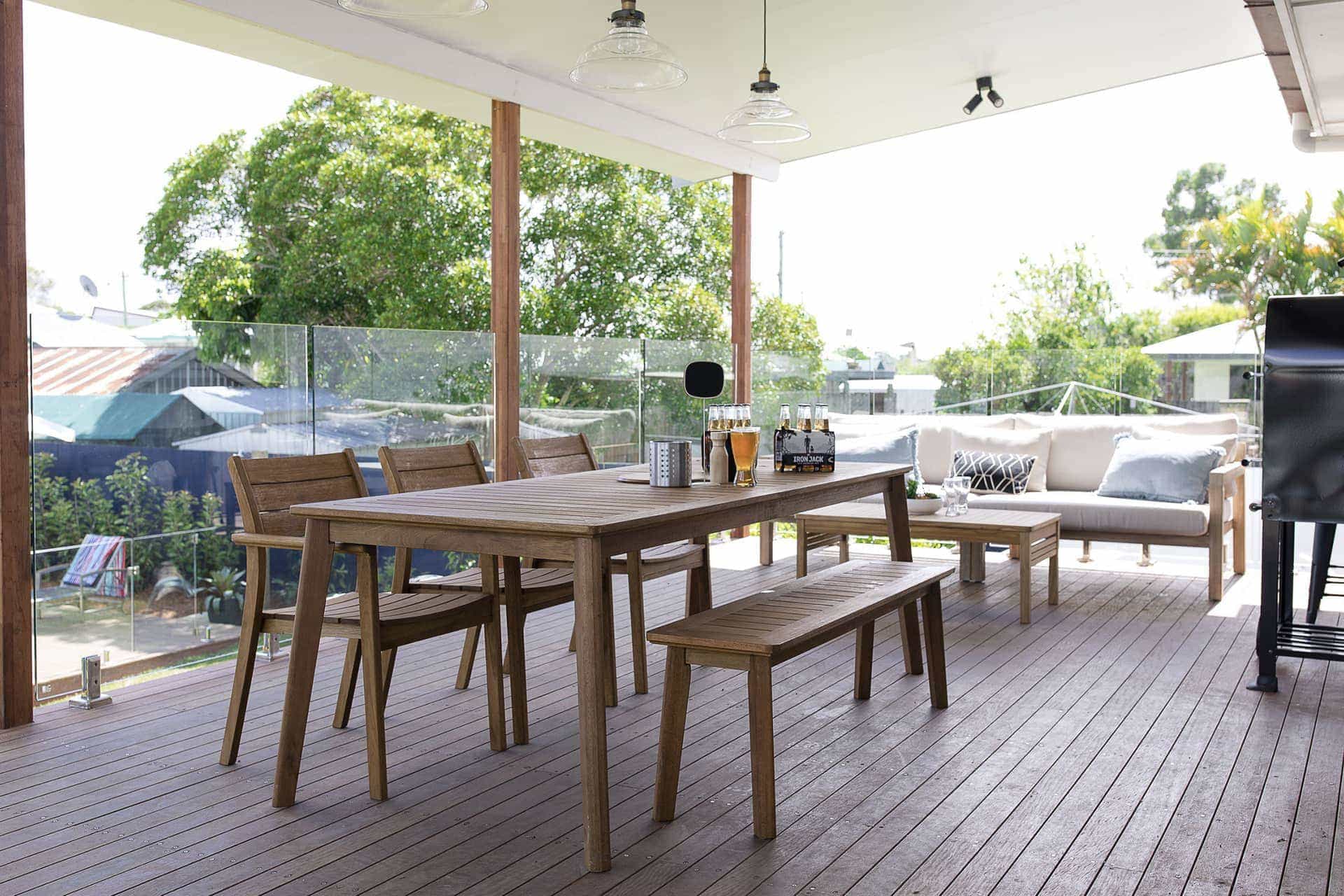 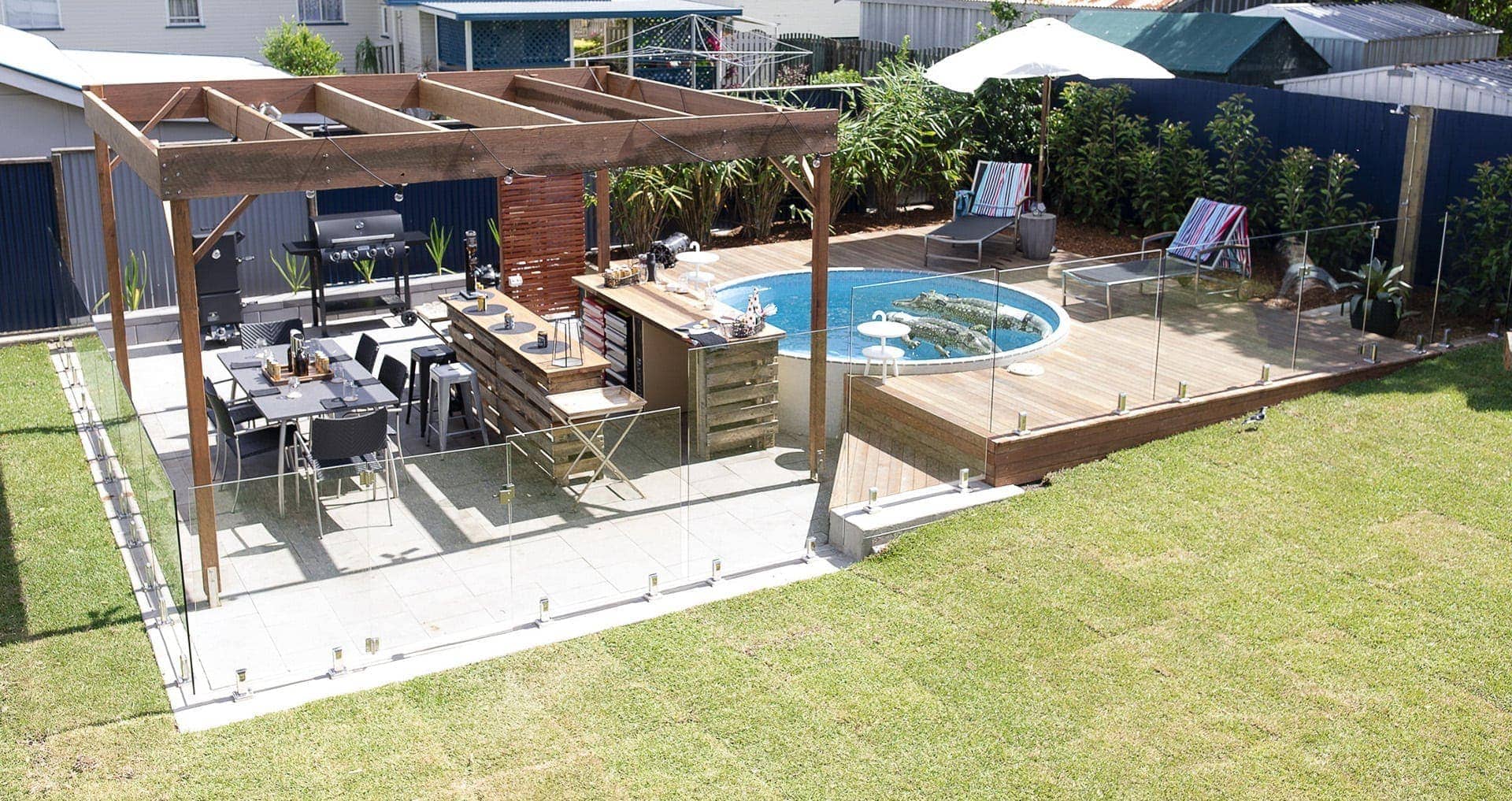 Chiara and David went all out in the Pool Area

There was a lot going on here, wasn’t there? I’ve gotta say though, I do admire Chiara and David wanting to accomplish a lot. It’s a huge undertaking to pull off a zone with this many elements. I feel this was their undoing though; they tried to take on too much and none of the zones within this zone was better for it.

They did a pool zone with decking, a bar area, a seated area, a pergola overhead, plus planting and painting and pavers. I’m exhausted just thinking about it. None of the different elements worked together though. That’s my main issue.

The pool area alone is gorg (though a bigger pool in such a large yard would have been better). The decking here is beautiful. There’s good planting along the fence. It frames the zone wonderfully, and there’s a great vibe going on.

But then it goes all rough and rustic around the bar, like me at a family gathering after a few too many Jim Beams. And then the seating area feels like a completely different style altogether as well.

A pool area with a well-built outdoor kitchen would have been lovely. Simplicity was needed here. If they had of run with consistent materials, planned a zone that felt spacious and functioned well, they could have come out on top.

Seriously though, the before shots of this backyard; anything the teams did would have been a massive improvement. So Josh and Brandon still walk away with a killer outdoor area.

What’s your Take this Week?

What did you think about the first House Rules 2018 Backyard Reveal? Drop me a comment below and share which zone you thought was a fave, and which was a fail. I’d love to know what you took away from this week’s episode.