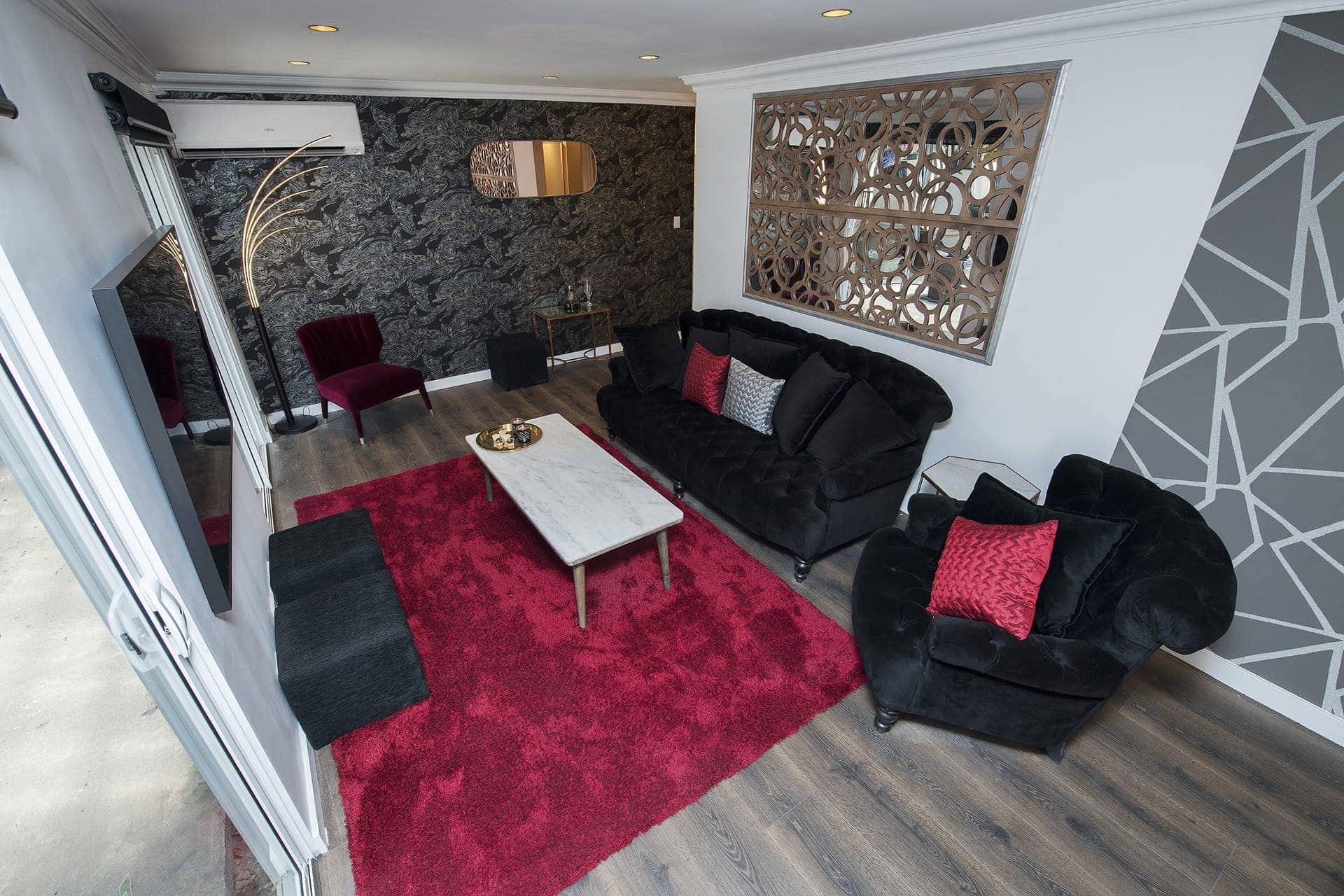 “This show is setting everyone up to be very unhappy at the end,” said my partner this week.

You see, he doesn’t understand how the House Rules 2018 Chiara and David reveal – or any of the series – works. He doesn’t watch the show. But he did catch me putting together this post, and felt drawn into my drama as I saw the images. I guess it was hard not to get sucked in, considering I was shouting “NO!” and “OMG” and “THIS IS A MESS”, at every image I saw.

That was after I worked out that the ‘after’ photos were in fact the finished product. And then I had to explain to my partner why this series is so flawed. No, the teams are not qualified. No, they don’t understand the house rules. And no, two teams in adjoining zones don’t care about how open plan rooms flow into one another.

My partner was confused, I was annoyed. But then, upon deep thought, prayers and meditation, I realised the issue was with me; I expect House Rules to be a design show and it’s simply not. And once I realised it was a comedy series (or a comedy of errors), I was at peace.

The peace didn’t last long, of course, because I’m about to rip into the rooms. And I know you’re here for it, because this was THE WORST home reveal in the history of television. 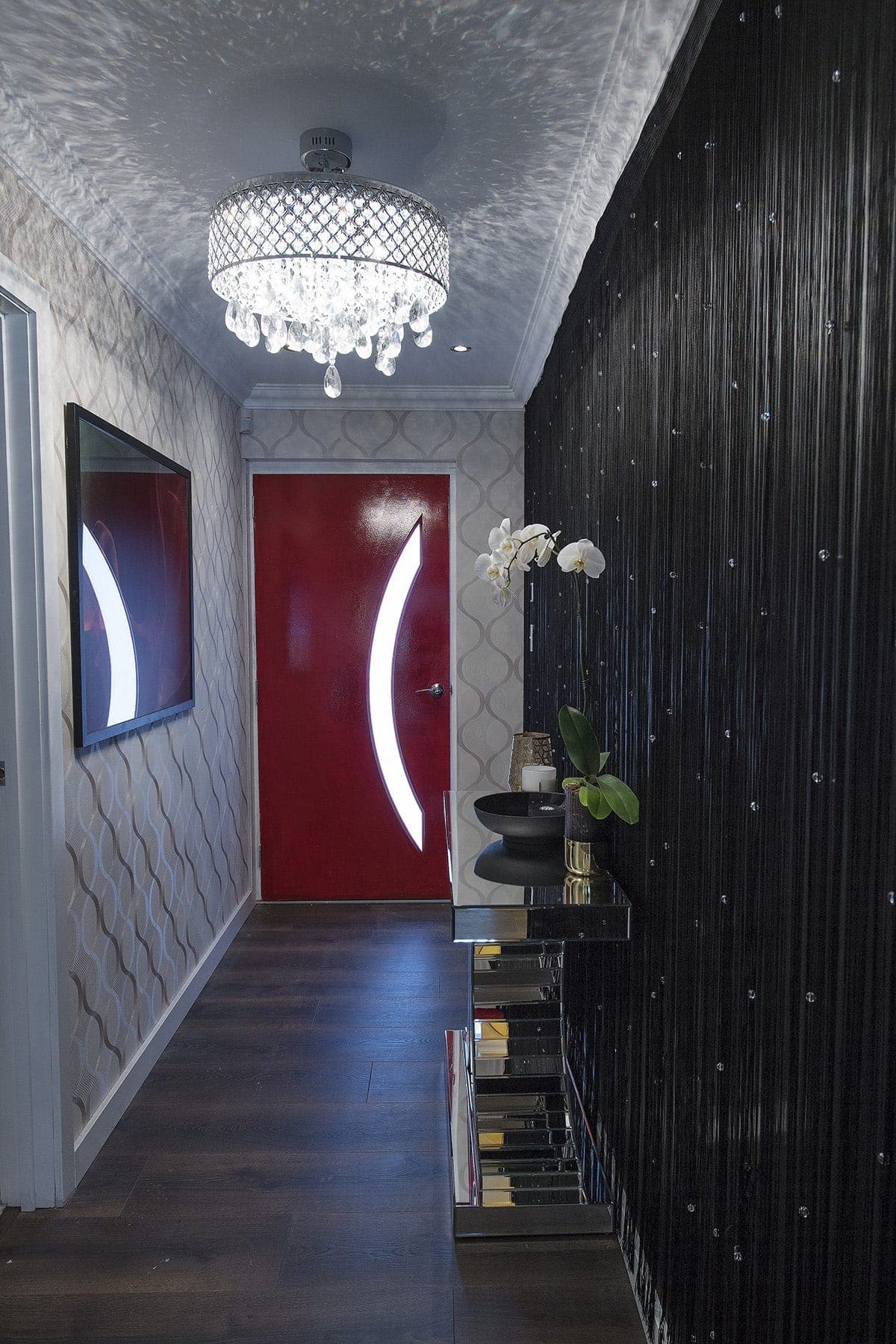 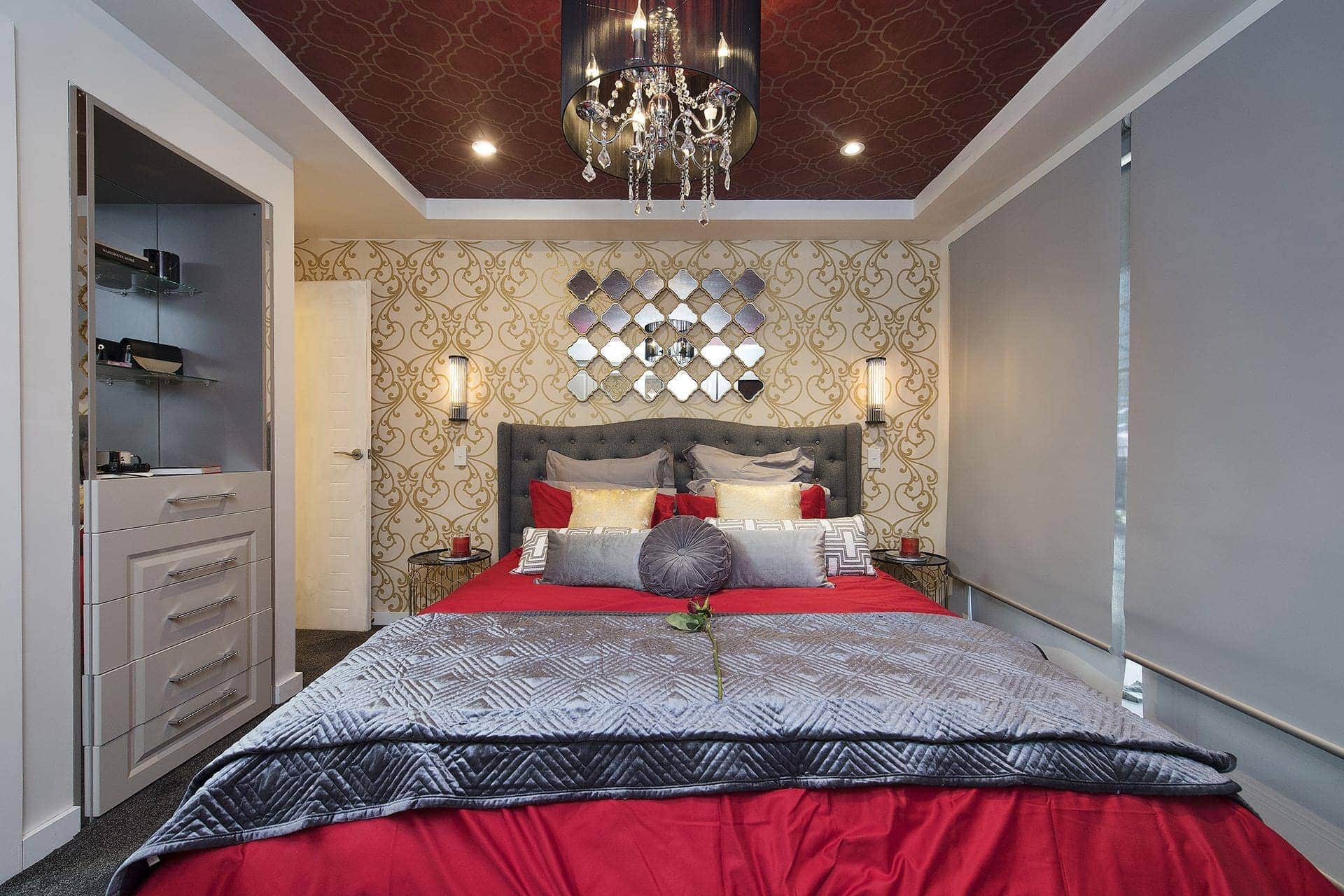 Give Jess and Jared Nine Lashings

Were the House Rules “Give me a home from the 80s with the ugliest wallpaper you can locate”? Because that seems to be how Jess and Jared kicked things off in their spaces. Oh, and bling. Give every room the most gawdy, over the top sense of faux grandeur known to man.

The entryway was a mess, but at least when you walk into the home you can prepare yourself for the pain that’s going to be inflicted on you through the rest of the home. The front door was horrible, the wallpaper sucked, and the entry table; can we talk about the entry table?

Reflective furniture is hands-down my most hated furniture type. I cannot. I just cannot. If you own it, I beg and plead with you to give it up. Let go and let God!

In the master bedroom, of course things got worse. It looks like a ‘posh’ hotel from a remote English town that time-travelled from 1992. I think the only salvageable thing is the headboard. But even that is too French provincial for this room.

They even included a rose on the bed. I just vomited in my mouth a bit.

I’m convinced all the teams went on a group acid trip this week. Because nobody sober produces a scheme like this. 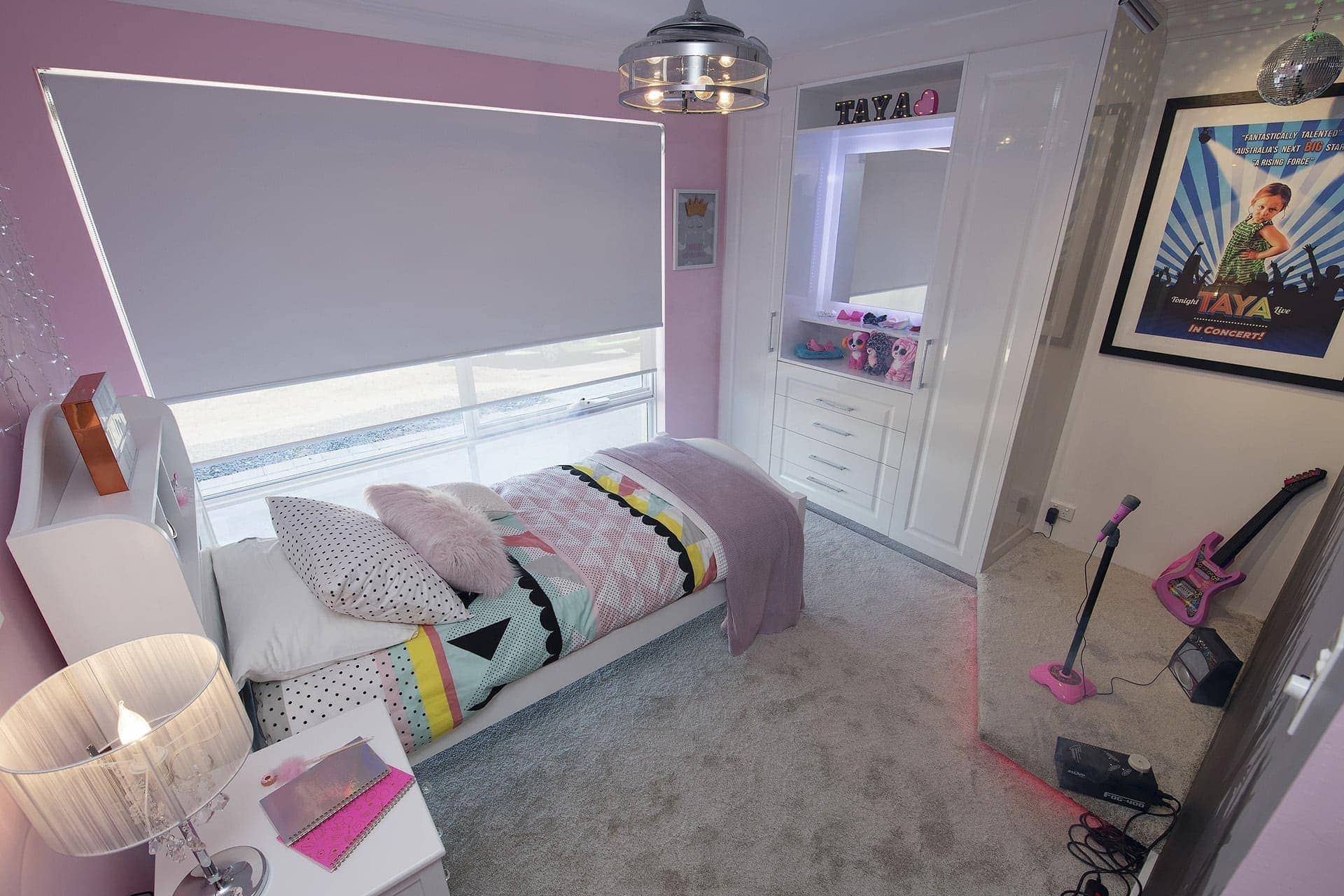 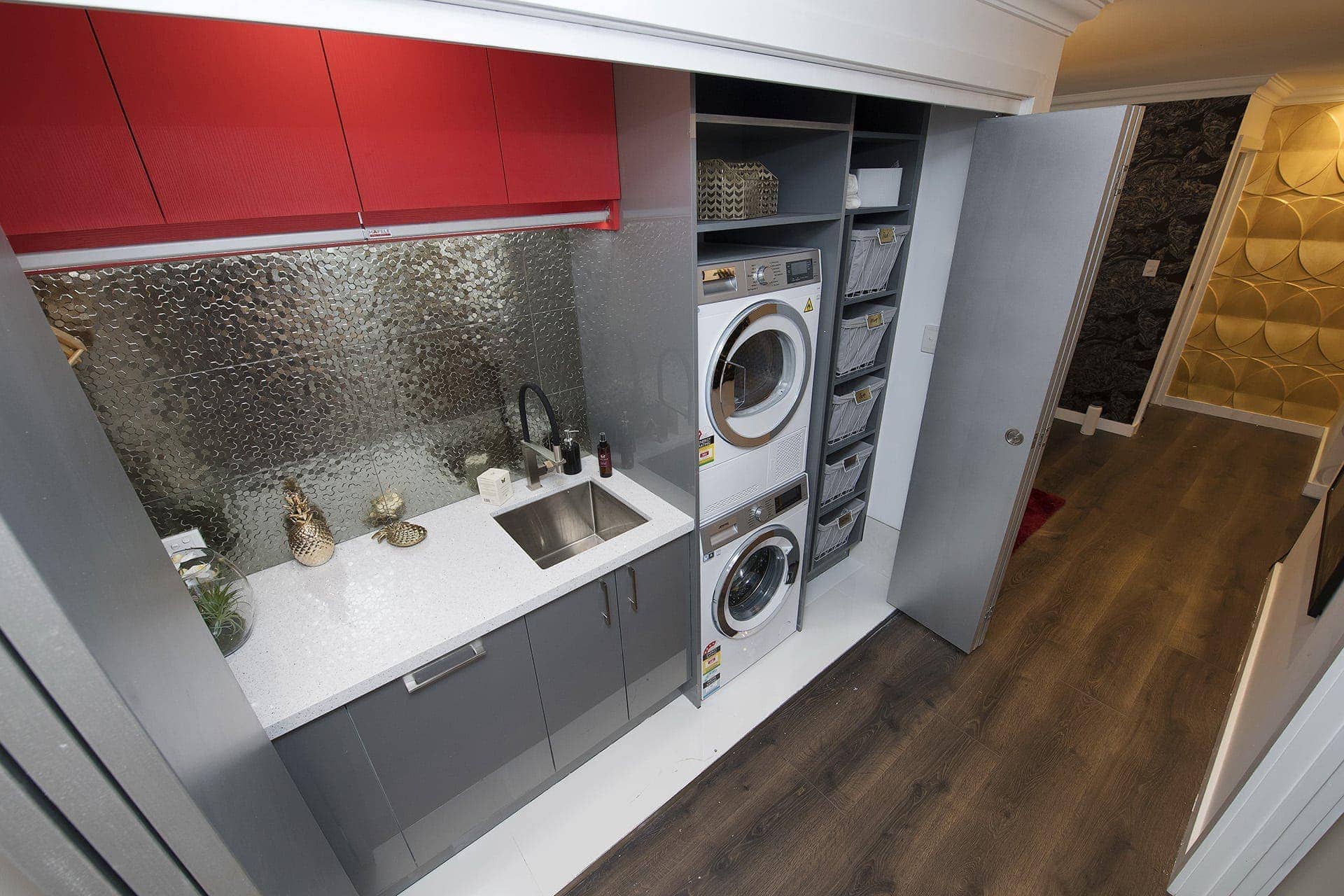 Josh and Brandon did well by Comparison

In a week where every room was diabolical, Josh and Brandons zones looked nice only by comparison. Like when you go for a night out with that friend who always gets wasted and you seem sensible – even though you’re seven drinks in and can only see properly if you close one eye.

The girls room… meh. It’s a girls room with a stage. To quote Miranda Priestly in The Devil Wears Prada: how groud-breaking. I’m really over little girls rooms with pink walls, grey carpet and white accents. I mean, come on. At this point the teams have seen this done numerous times. Can we think outside the box a little?

When it came to the laundry, the layout worked. The pieces were fine. But the colours were of course uglier than sin, and the high-gloss cabinetry did everything to make the laundry feel as tacky as the rest of the home.

Not even a Valium and a lie-down is going to make me feel better this week. I need to know this entire home is going to be re-done before I can move on with my life. 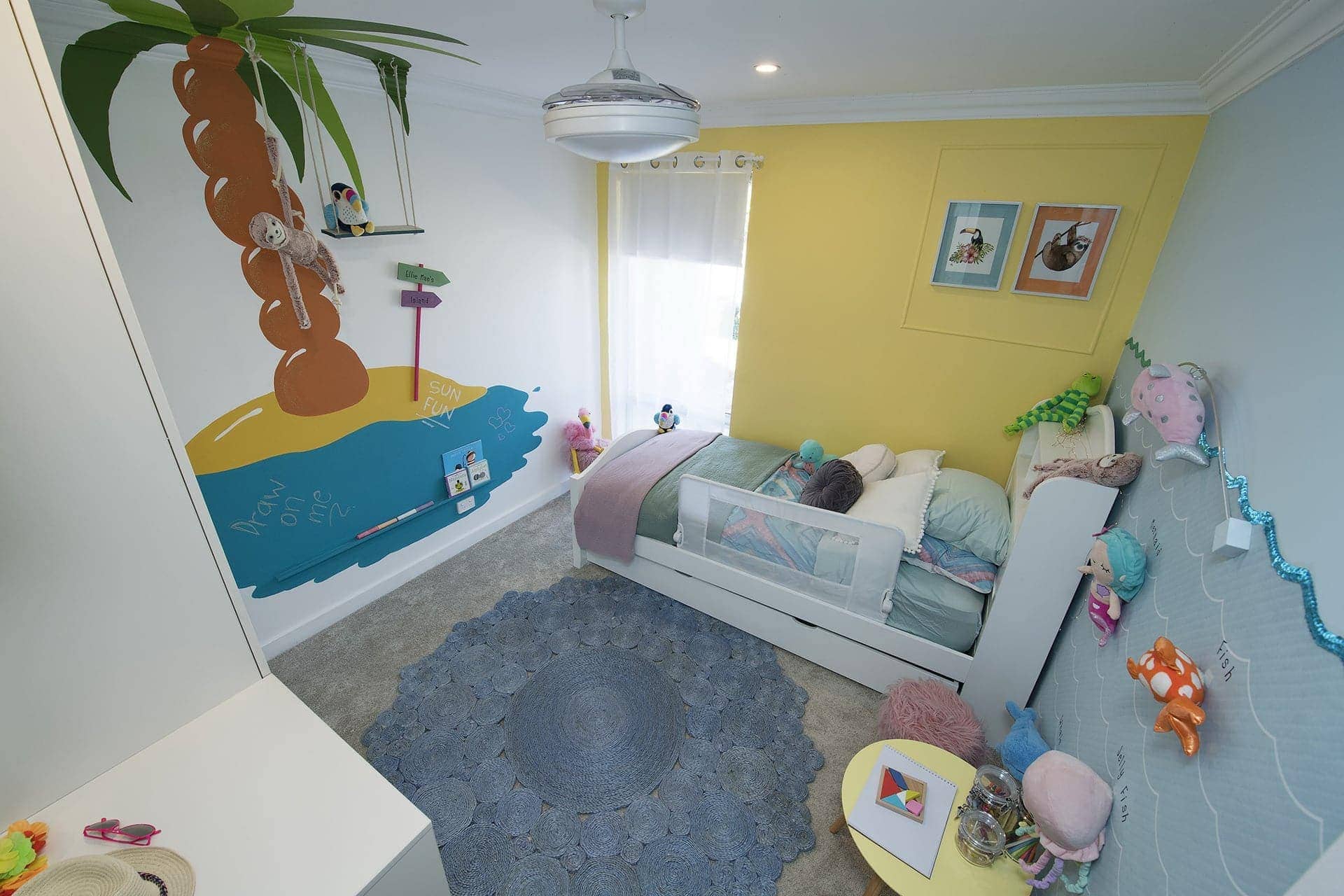 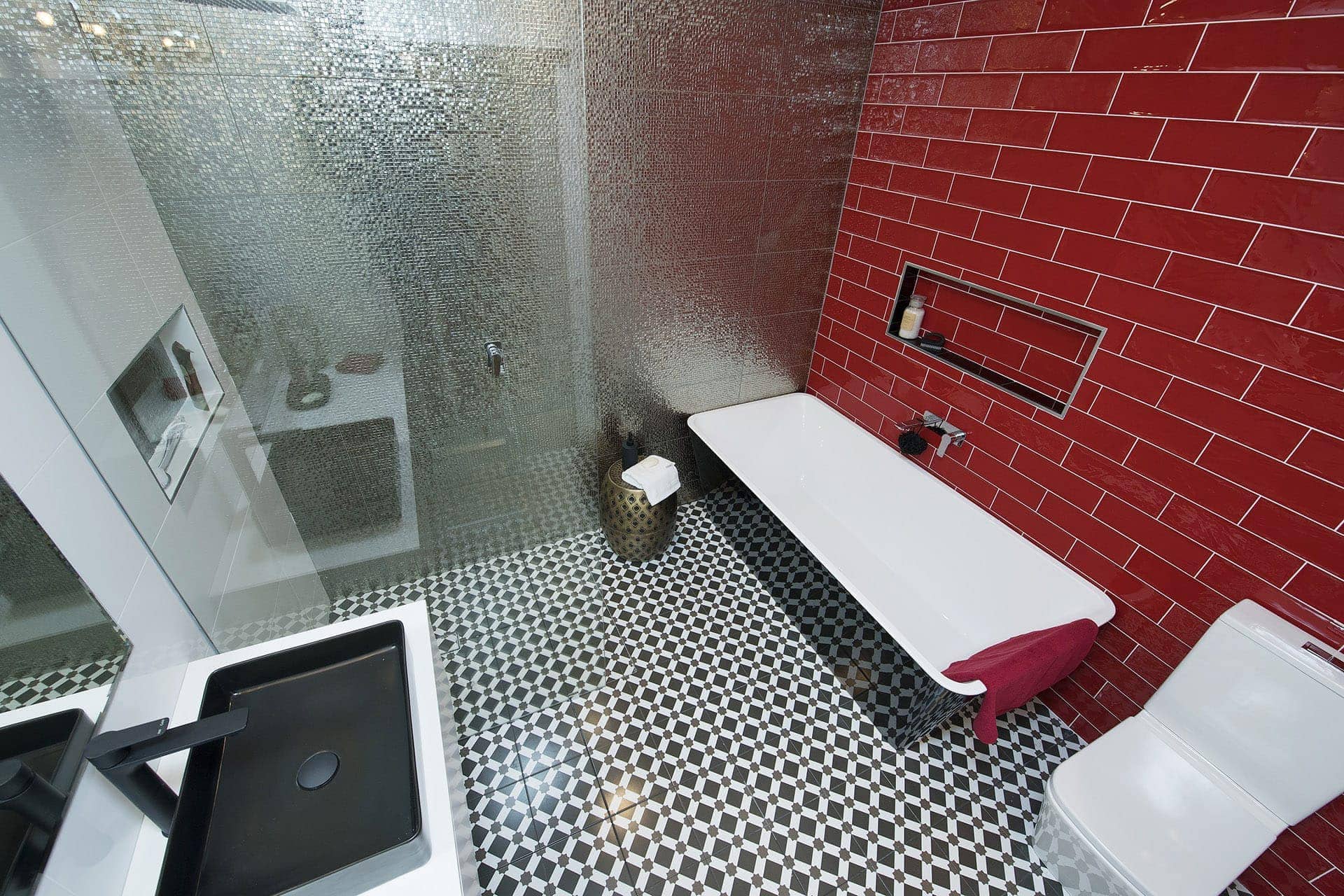 Send Toadfish and Mandy back to Ramsay Street

I really want to pull back on my bitchery this week but it can’t be done with rooms as bad as these ones.

In the other kids room, Toadfish and Mandy created a space we’ve all seen before – in kids rooms across the country – that the kids created themselves! Toys were thrown at the wall as if a child was having a tantrum and they stuck.

Wendy thought the yellow was the best colour she’s ever seen. I feel for you Wendy. If the shade of paint is the only good thing we can say about the room, we’re in strife. That’s like me saying “I really appreciate the way that window is made from glass so you can see through it from either side”. Seriously, judging this show is a lesson in diplomacy.

In the master bathroom, we were delivered what I call Tequila’s revenge. You know, the kinda bathroom you’d walk into the morning after a night out and instantly getting a migraine that only hardcore hospital drugs could remedy.

LLB thought the bathroom was a six-star boutique design. And it was at this point that I wanted border security to bust into the place and put him on a plane back to the UK without due process. If this is six-star design, I’d hate to see any star rating lower.

On a side note, the home overall is so dark. This scheme does not bode well for a light and bright Aussie climate. I can’t imagine how any rooms would look flooded with daylight.

The entire home is a little Vegas. The blinds are always drawn closed and you have no idea what’s going on outside. 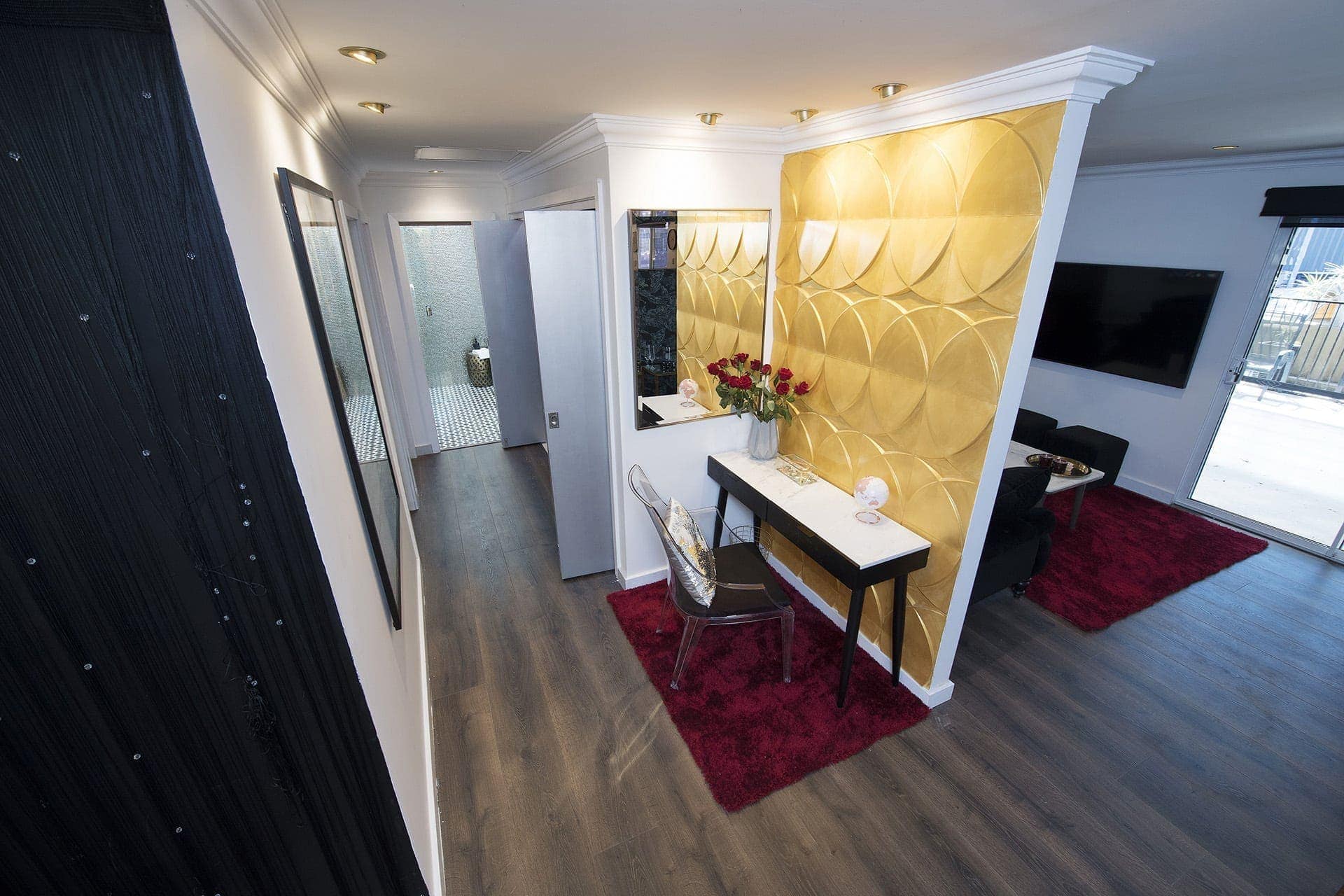 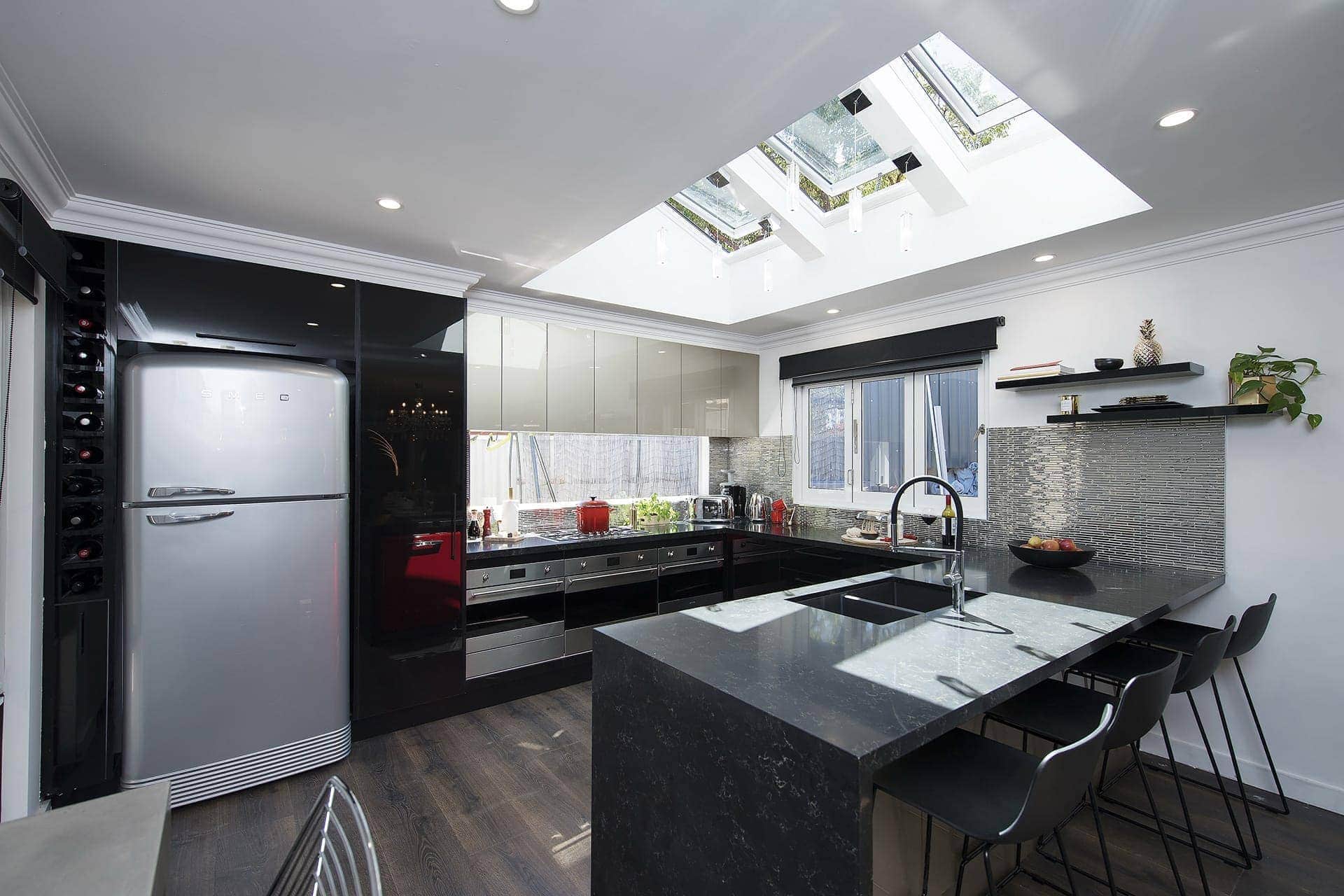 Mel and Dave, I thought I knew you

This week Mel and Dave had a moment of genius in the hallway. Because if it’s one thing I’m always saying a dated red-black-and-white scheme needs, its a burst of sunny yellow! A yellow made even more impressive by placing a mirror next to it so its reign of terror can continue into other pockets of the home.

I don’t think there’s a whole lot to say about this zone. And let’s be honest; I’m running out of ways to say ‘bad’. At least they chose a rug that mirrored the rug in the dining room identically. It’s good to know that when it comes to some sets of twins, both are the evil one.

In the kitchen, the early 90s English vibes were in full force. I would have appreciated a front-load washing machine in here though, to really deliver on the true UK flashback fantasy. They could have also committed to a plastic tub in the sink to wash dishes in and installed a wind-out window you could smoke a ciggie beside.

I will say that the windows on the roof were good. So we have one decent moment in this home so far!

High-gloss coloured cabinetry needs to be banned immediately. I’m sure we can all agree on that right? 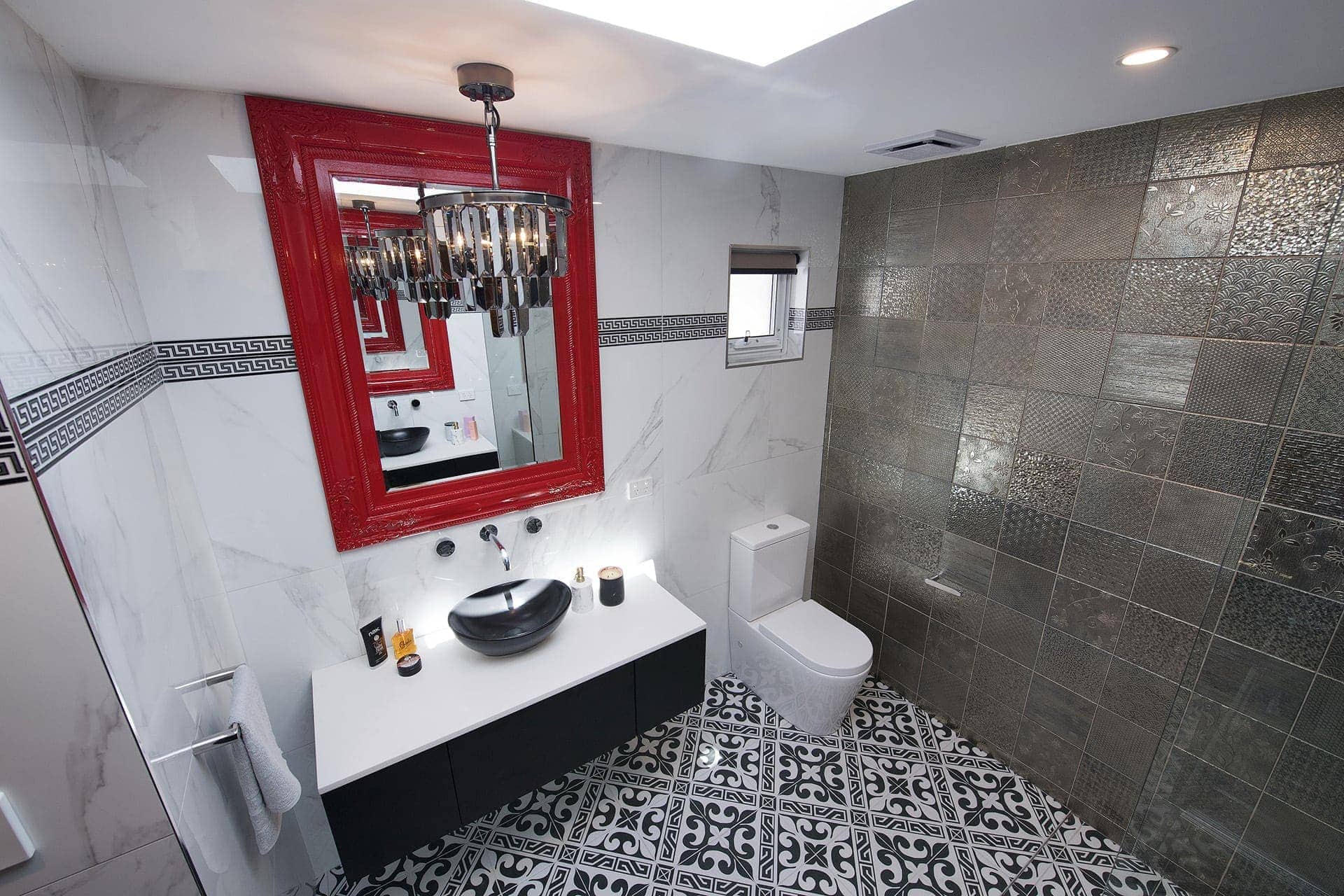 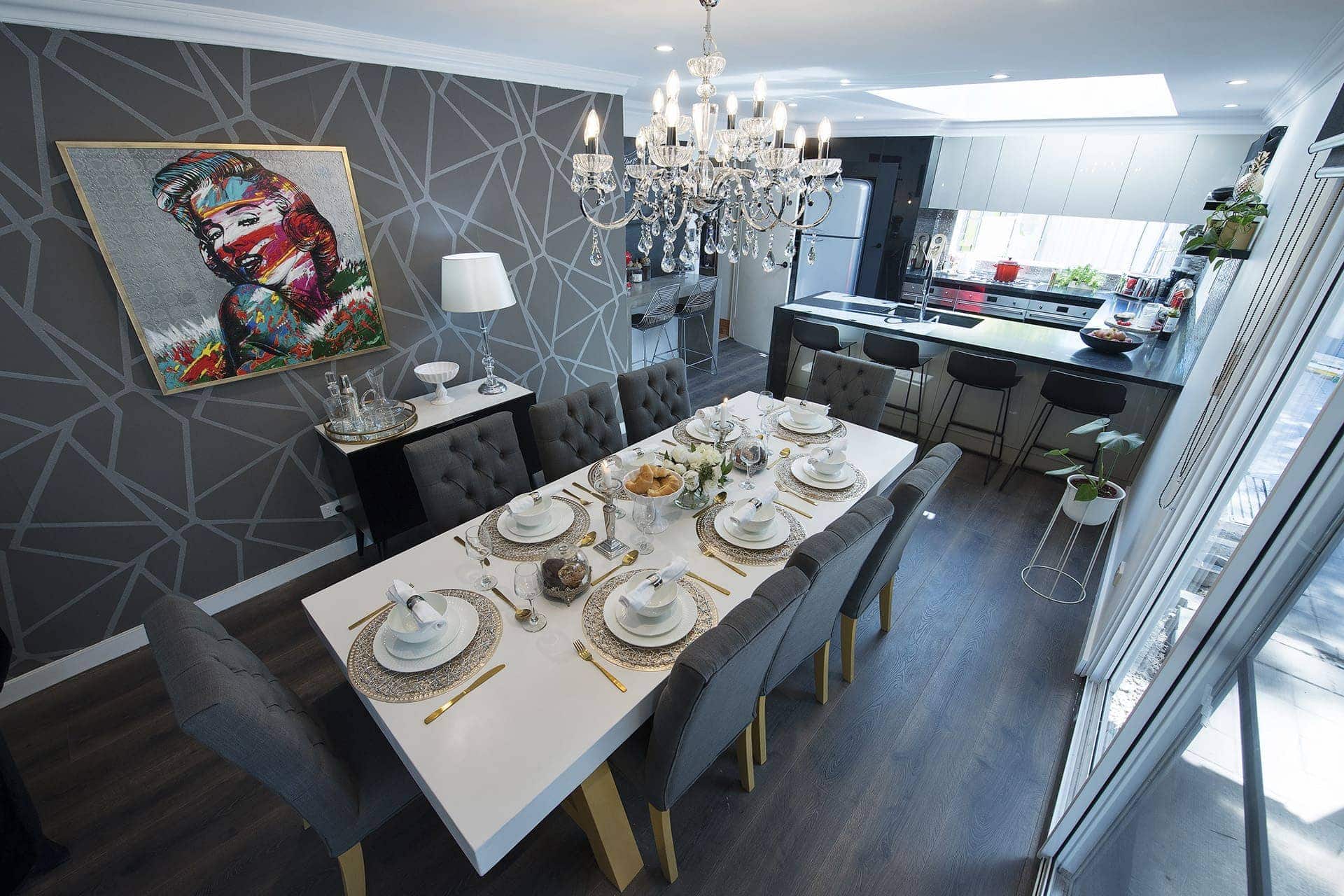 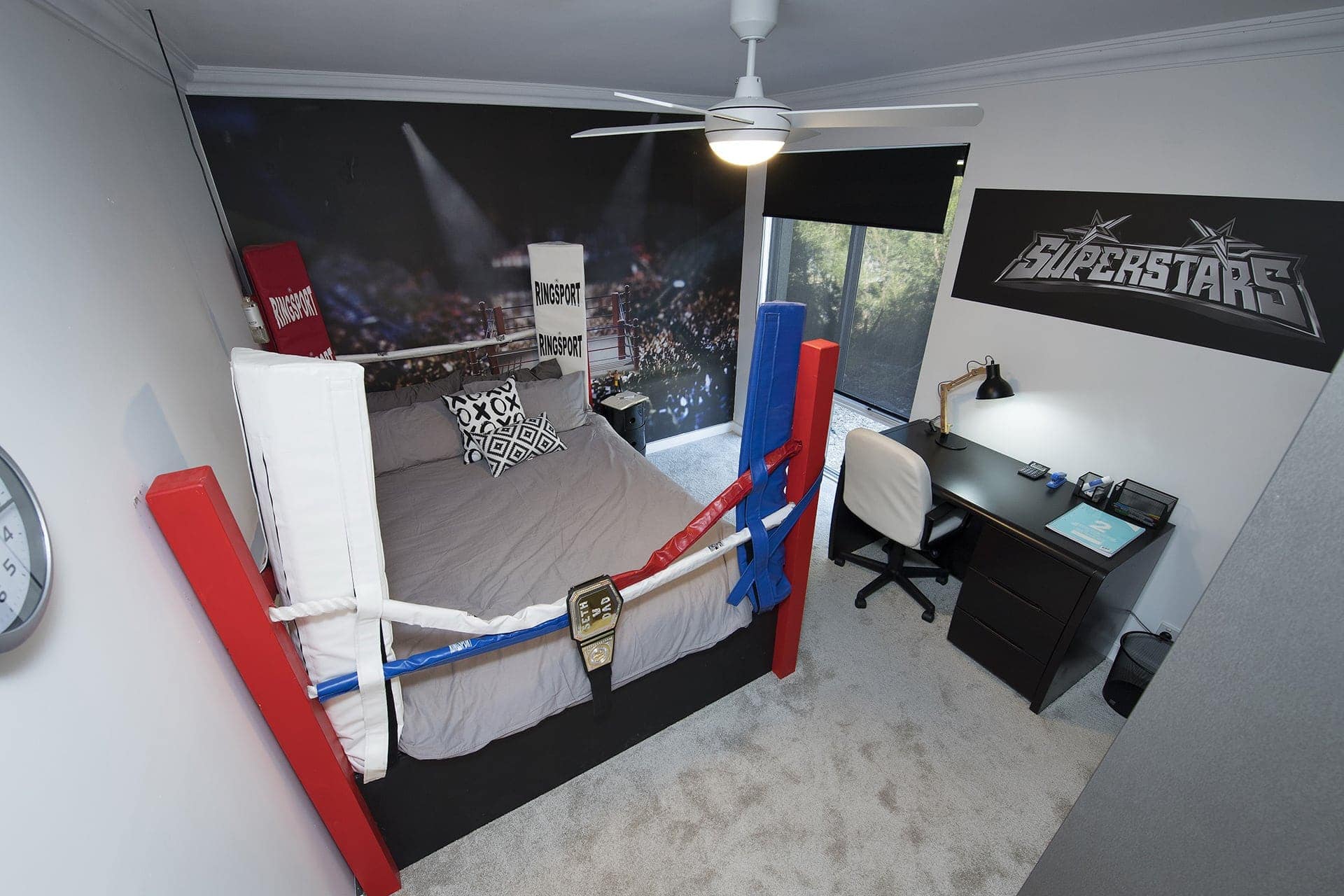 Looking at the bathroom photos Leigh and Kristie delivered this week, I started to think “If only you took THAT element away”. But then I kept taking away elements until I ended up with an empty room. So I guess that means the entire space wasn’t working.

The red mirror was oversized for the space and looked crammed in. The strip of black tile running around the room was horrible. The wall tiles in the shower were a dated, blingy mess. It was all a dog’s brekkie. Let’s leave it at that.

Now, I’m going to go out on a limb here (I promise I’m sober when I say this). But… the dining room is the best room in the house. Hear me out!

Consider the Marilyn artwork burnt to a crisp. She’s out. Consider we took away the chandelier from Liberace’s house. He’s out. What you’d be left with is a Provincial dining room that you could actually work with. I mean, of course it doesn’t fit in with the dated 90s hotel suite vibes of the rest of the home. But it does have a nice colour palette and the scale of the table worked in the space.

That bonus room. I don’t know if I have the words to express how truly wrong in every way this room is. A wresting bed? Is this a thing? It’s the kind of bed frame I imagine would be in a gay, wrestling themed sauna. It’s creepy in every way, it’s way too big for the room, and it’s … look, I honestly have no more words.

Set the bomb for 15 seconds. That’ll give me enough time to run from the home before everything explodes. 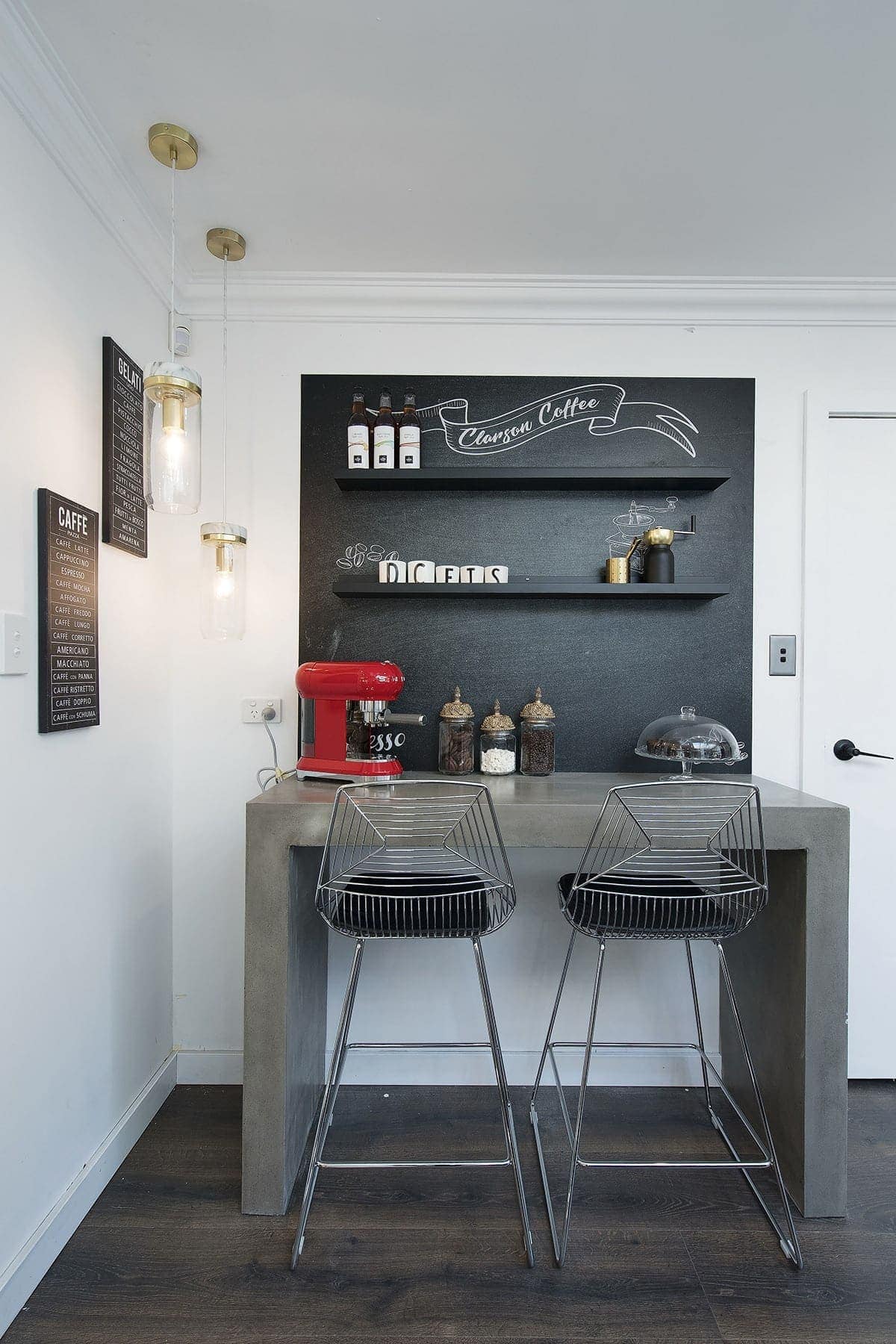 I never like to go after the people on this show, only the design.

What I will say is that the burgundy occasional chair in the living room is the only thing in the entire space that I’d take out of this zone to salvage. The rest of it can go back to the discount store it came from. I imagine the store is named something like “Shazza’s Tizzy Things”, and you can get some real classy, piss-elegant decor gems from there during their half-yearly clearance.

Can someone explain the mirror on the wall to me? With the timber screen over the top. Is it even timber, or is it steel? I can’t get my head around it, but I don’t think I want to.

The contraption in the corner (is it a lamp) also needs to go. Not sure what or why it exists, but I don’t need the details. Just turf it.

In the coffee zone, things were OK. Though truly, this needed to be a wine station. I need at least a whole bottle of bubbles in me to be able to stomach and appreciate anything that went down in this home. Give me my grog goggles and nobody gets insulted anymore.

What’s your take this week?

OK, so I know I went all out this week. Bitchery was set to 100. But I think it was warranted. I’d love to know what you thought of the House Rules 2018 Chiara and David reveal. Drop me a comment below and share your thoughts. Did you think it was as bad as I said it was?