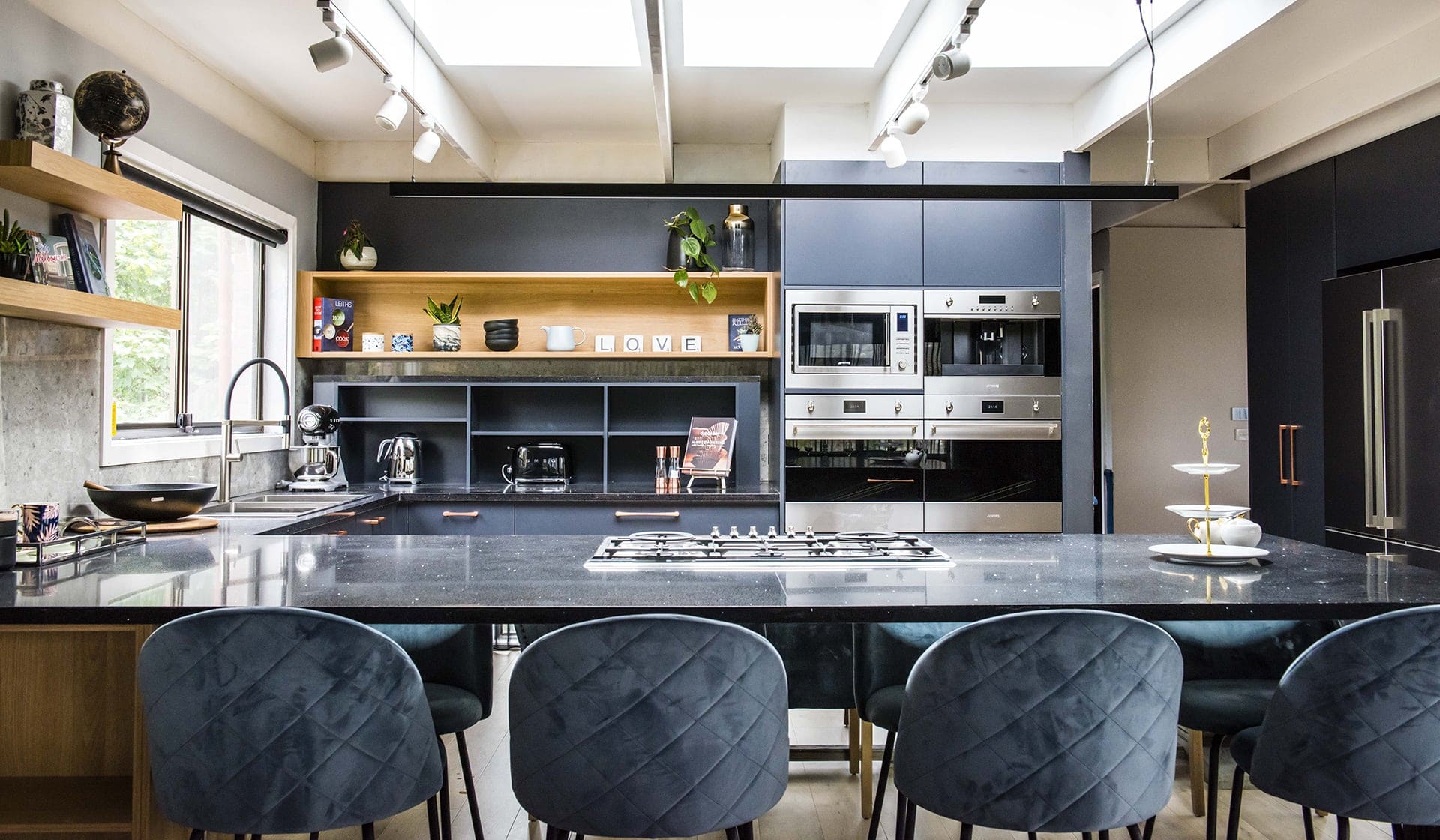 The House Rules 2019 Pete and Courtney reveal has just gone down. And I cannot wait to get stuck into judging each space for you!

Now, you know the rules I always play by here: no personal attacks on contestants. Trust me, I run into too many of them post-show and I do not want that kind of awkwardness in my life.

And here’s the thing: they’re novices with no experience – they don’t deserve to be attacked. They just want a nice-looking house and their mortgage paid off. I mean, 99% of them don’t get that, but that’s the risk you take when you go on a show to hopefully score an ambassadorship with a tile company once filming wraps.

The entire point of these post-reveal articles is to show you what not to do when trying to apply some of these design moments to your own space. It’s learning. I’m doing God’s work. I’m going to heaven. Woohoo!

And you know I always call out the good stuff as well as the bad. So there’s my disclaimer done. Let’s get into the judging. 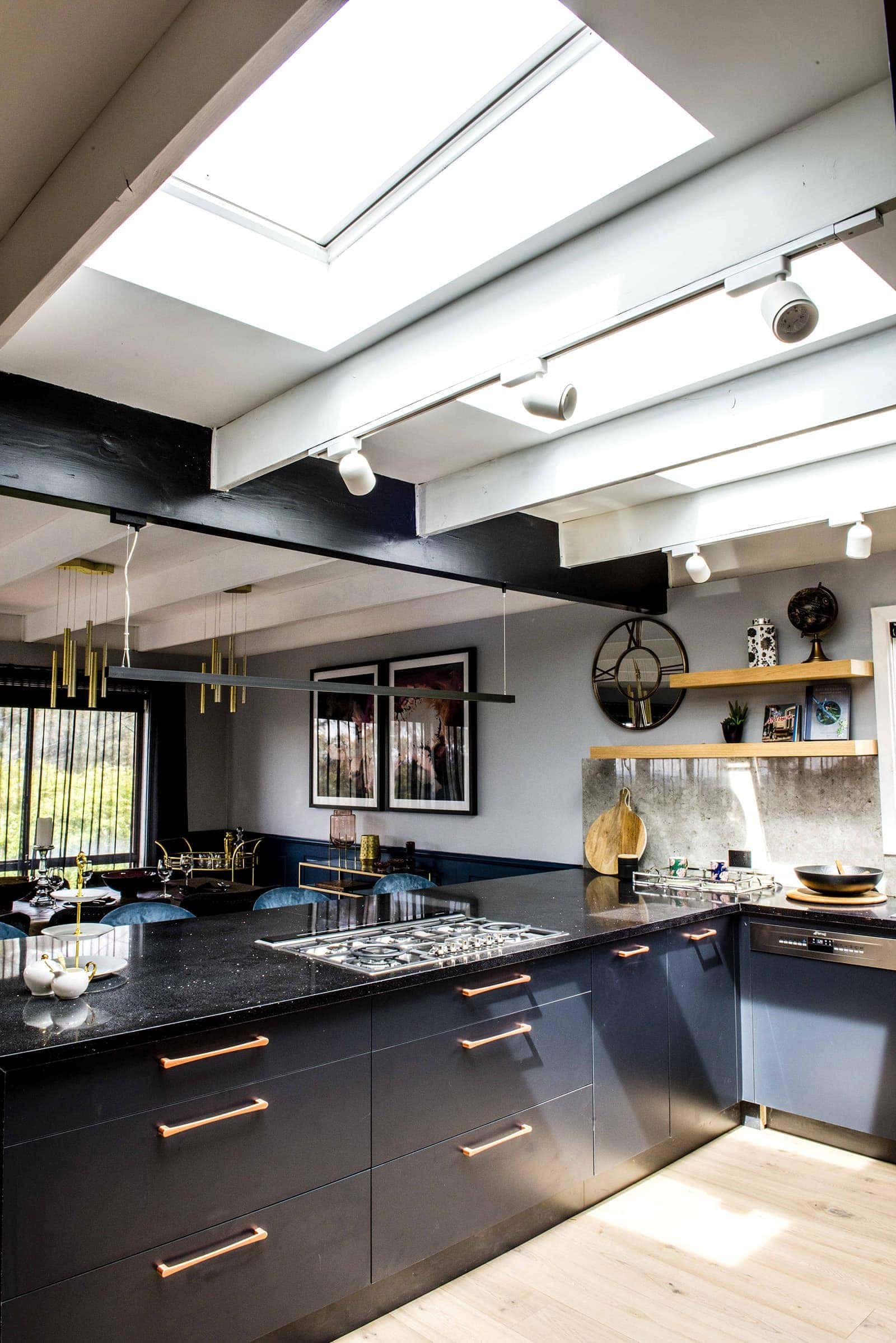 Let’s Start with the Galactic Kitchen

There’s something about the assumption that opulence means ‘bling’ that really gets my goat. Truth is, you can have an opulent and sophisticated home with no gold, no reflective surfaces, no brass and no shimmer & shine. Thought I’d start by making that point because the teams here took the word ‘opulence’ and made all the major rookie design mistakes.

In the kitchen, the biggest issue is the benchtop and splashback. There’s something quite reflective and faux-glam in that countertop that has me feeling a bit cheap. Like when you pour $2 hand soap into your old expensive bottles to fool guests that you always buy the high-end stuff (I’m guilty as charged!). It’s just not a finish that works here. And the splashback is just as bad. It looks quite tacky.

A matte grey or even concrete-look benchtop would have sizzled here (like the one that was used in the laundry). And it would have given the kitchen a little grit and grounding. As it is, it’s too futuristic disco. A disco where they serve everything in plastic cups and there’s an old drag queen named Tess Tickle who does bingo on a Thursday night.

Now, I am living for the bar stools, but they don’t work in this space. Pick a feature, teams. You can’t have dramatic blue cabinets, a dramatic black benchtop, an eye-catching splashback and then put in vivid blue stools. It’s very busy. 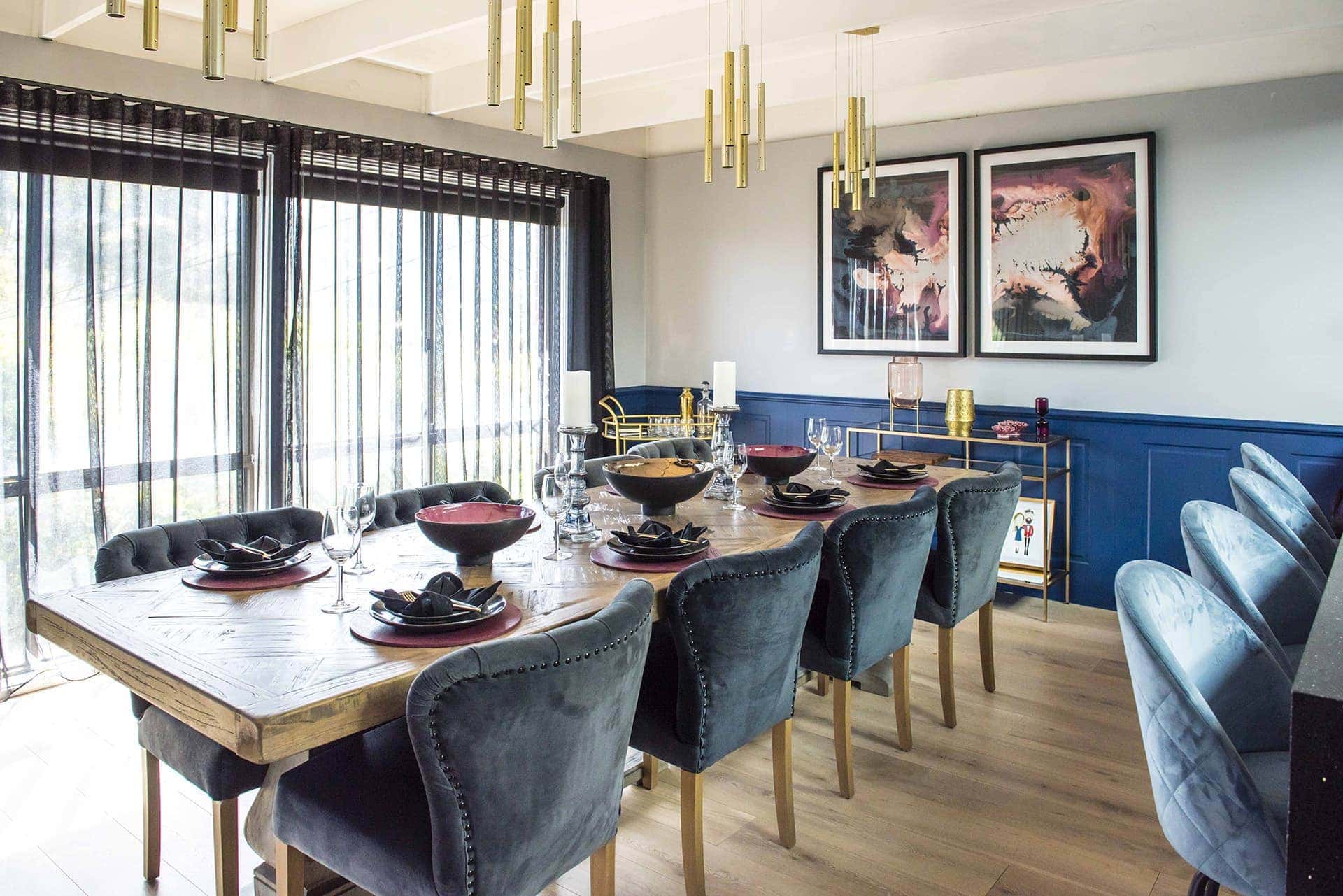 The Dining Room is a bit Confused

The dining room is like me getting off the plane from Europe last week: tired, confused, and with a lot of money spent on it despite it looking the opposite. There are two very competing styles here: provincial and luxe. Again, we have gold everywhere. Now, if the house rules contained instructions to include gold, fair call, but this is just too much. Editing is key and I hope as the season goes on the teams implement it a bit more.

The positives are that the table is quite lovely and size-wise it’s great for the space. I also really like the chairs, but they clash with the stools nearby. I understand different teams did the kitchen and dining, but it’s still a shame.

I also love love love the artworks. Did I mention I love them? I actually specified the same ones for a client of my own recently. So I can’t be mad about those. They’re probably the stand-out in this space, but all the styling around them makes them look less amazing than they are.

I absolutely cannot with the gold Enya panpipes hanging from the ceiling. They really cheapen the space. I also don’t enjoy the blue wainscoting. It’s too much. Again, it’s about choosing a feature – and there’s too many here. 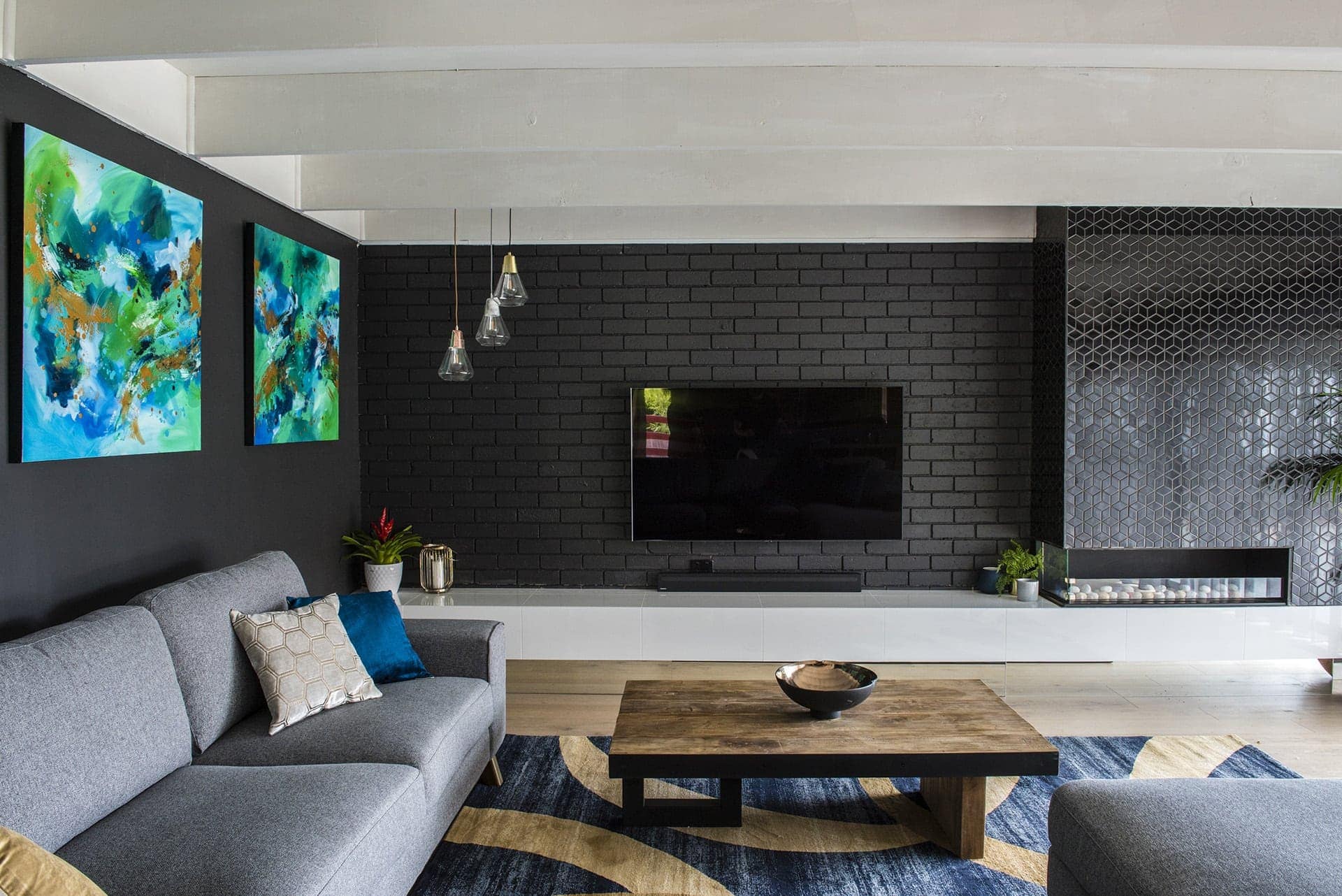 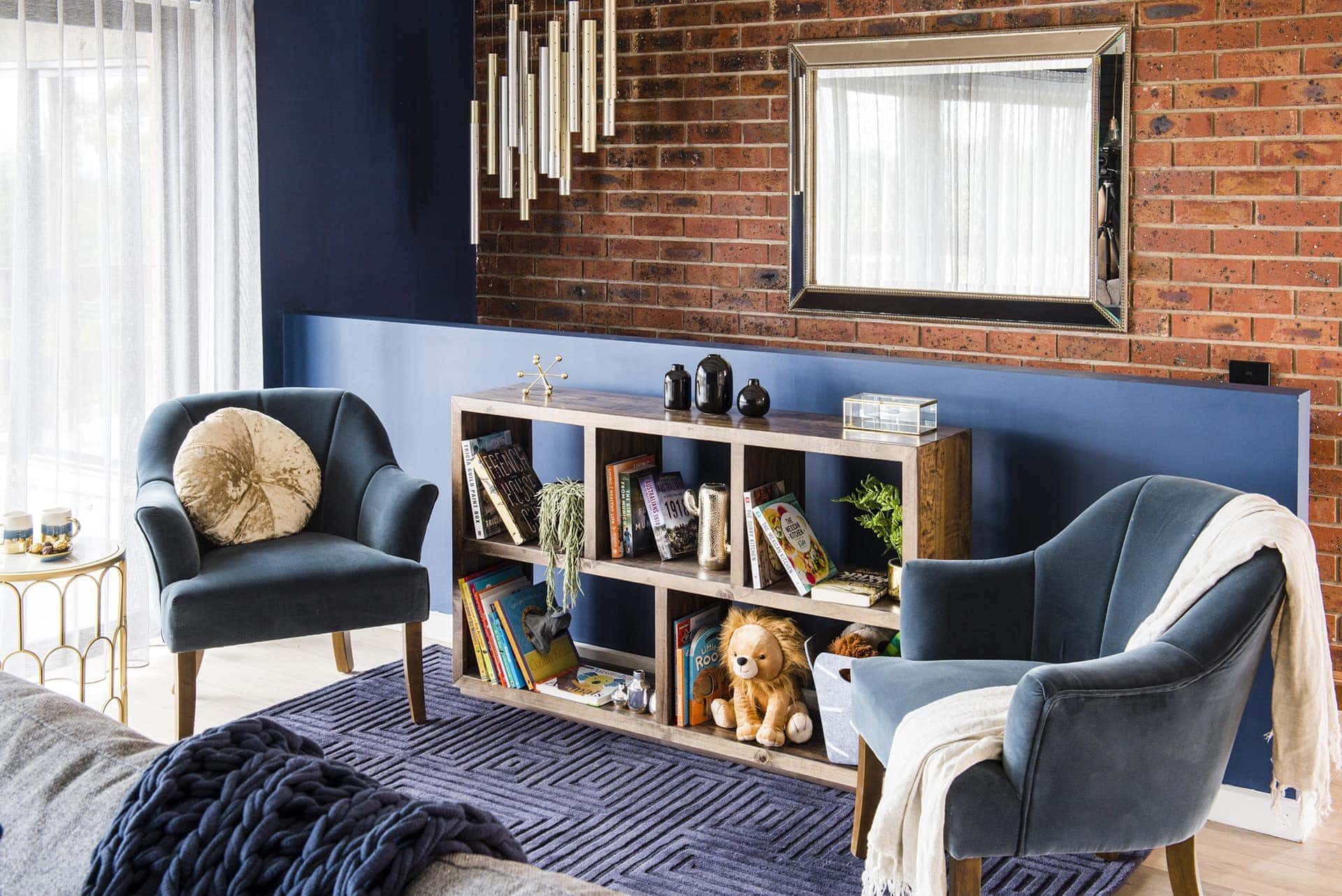 The Living Room has Serious Promise

I actually like the shell of this room. The flooring is gorgeous, the sheers are nice, and I am all for a black wall. A black brick wall is even better. The exposed red brick across from the TV as you enter the space is also quite lovely. But a lot of the elements that were put into this room felt quite random. Is it luxe, is it earthy, is it industrial? Truth is, it’s all of those, but they clash terribly.

I’m also a bit confused by the nook above. If it’s a kids play area, where are the chairs or beanbags or tables for the kids? If you’re going to create something like this, see it through and realise its full potential. No kids want to sit on those velvet chairs, and no parent wants them to. They are divine chairs though, don’t you think?

Despite the bookcase being a good industrial moment, the styling is a let down. The decor is too small and we’ve seen it all before (in Kmart, it’s all from Kmart, landed over a year ago). The cluster of pendants in this living room is also a crime. And while I do like the art, it does not work at all in this room.

Lastly, if those tiles on the wall bedside the TV were matte grey or marble it would look a thousand times better. Reflection and glass has once again made the room look cheap. 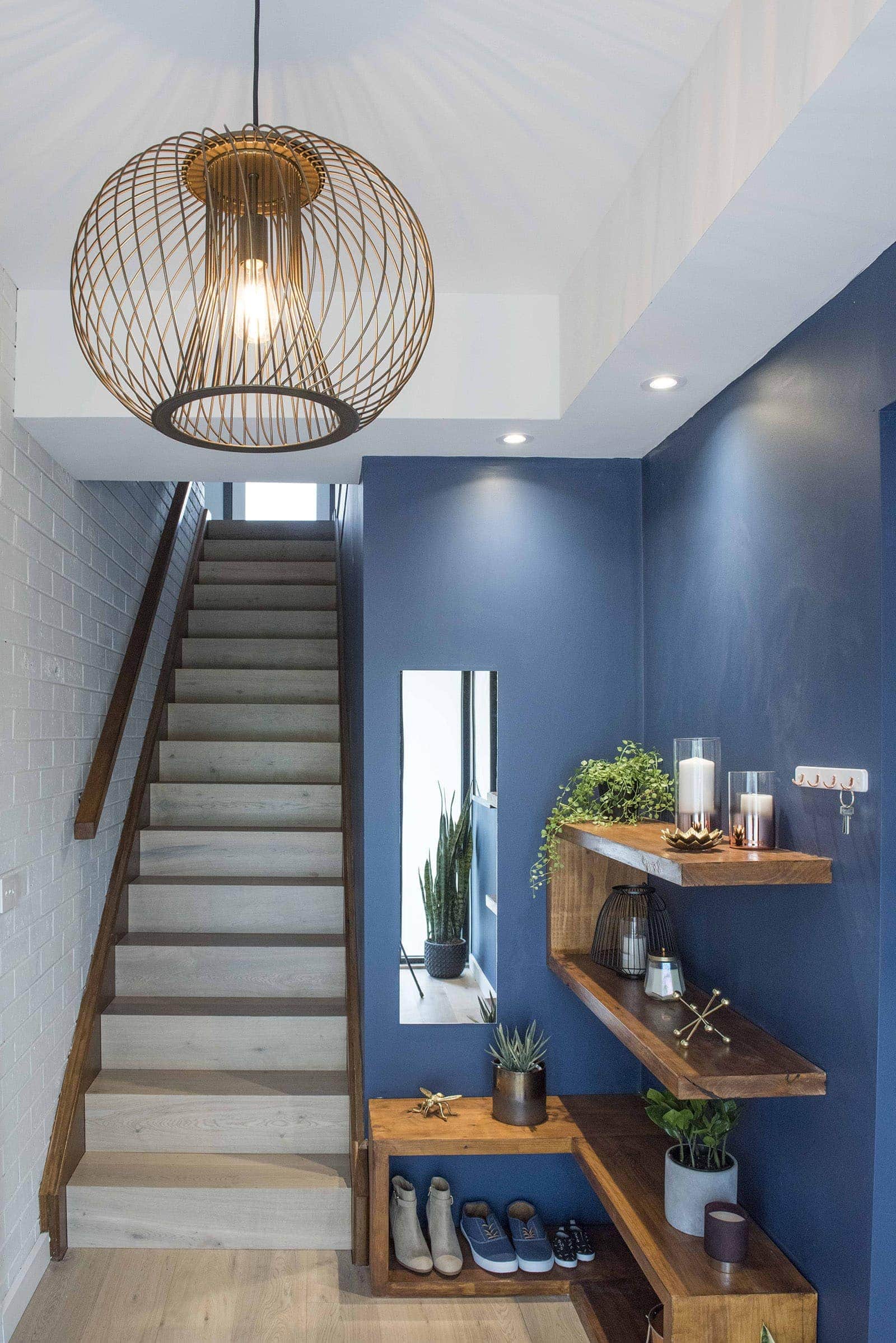 Above: I actually like the entry so we’ll move forward with dishing the dirt on more controversial spaces. 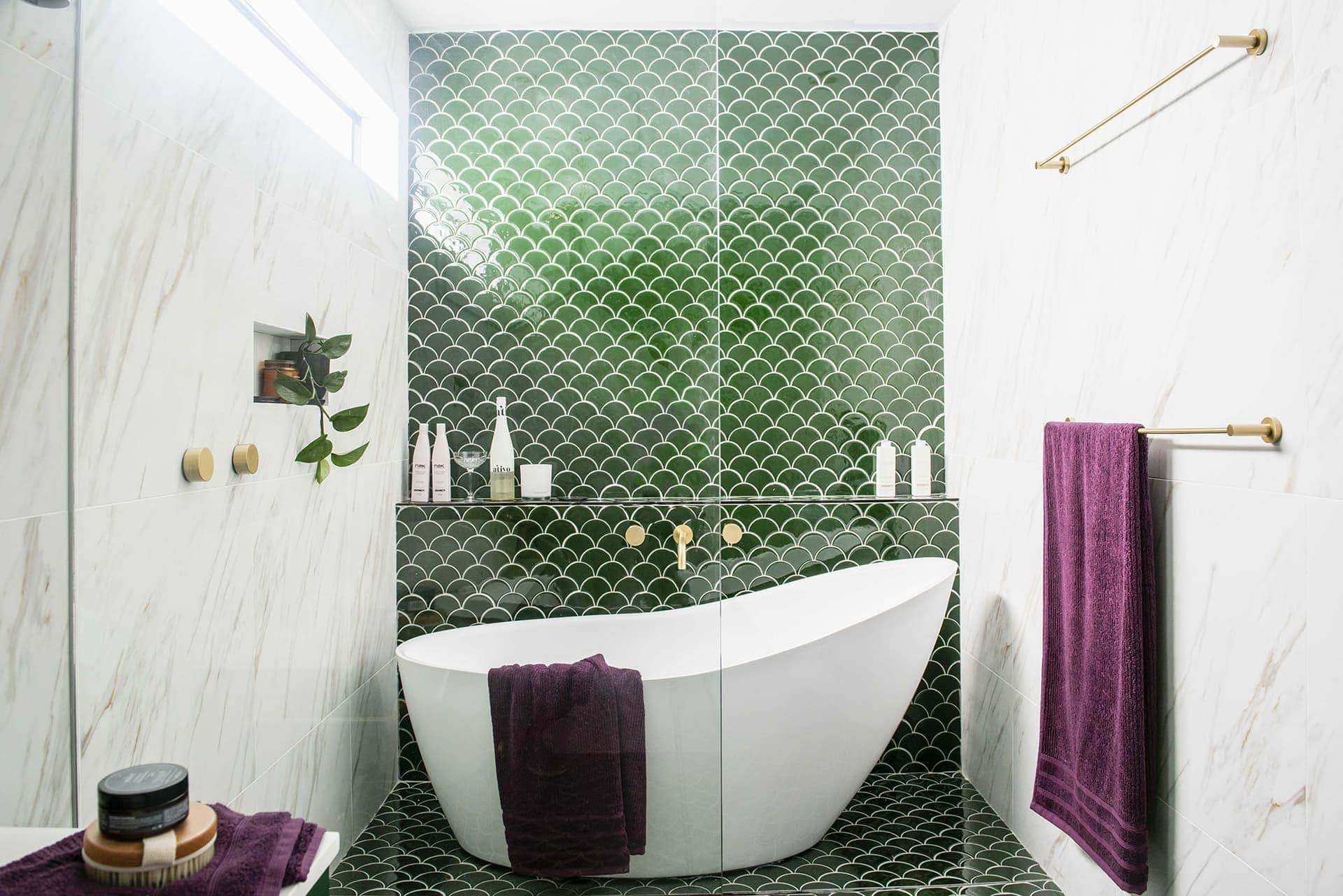 Did the Bathroom give you Deja Vu?

You can’t fool us, House Rules! While I enjoy a green tile in a bathroom this is such a replica of what happened last year in Toad and Mandy’s house. If you want to see it for yourself, check out my recap post from that episode. Not only was this exact tile used in T&M’s ensuite, but the bath-in-shower setup was used in their bathroom too. All from the same episode. Let’s bring some new ideas to the table guys! Or at least watch last season before you audition for this one.

But looking as this bathroom solely from a design perspective, it is nice. I do enjoy the green tile. I do enjoy the large-scale marble tiles too. It was wise to create a shelf above the bath to sit things on, and I also enjoy the recess in the shower. So it’s not all bad, it’s just been done before. Personally I think the bath appears a little dwarfed and stuffed into the space, but I could be wrong. I’ve been known to be wrong on the odd occasion.

I also believe the gold has to go. I hate to repeat myself, but it’s just like in the other rooms of this home: too much. Let the green tile be the star of the show; everything else can be a supporting player. To put it bluntly: the tiles are Beyonce and the tapware and towel rails need to be Kelly and Michelle. 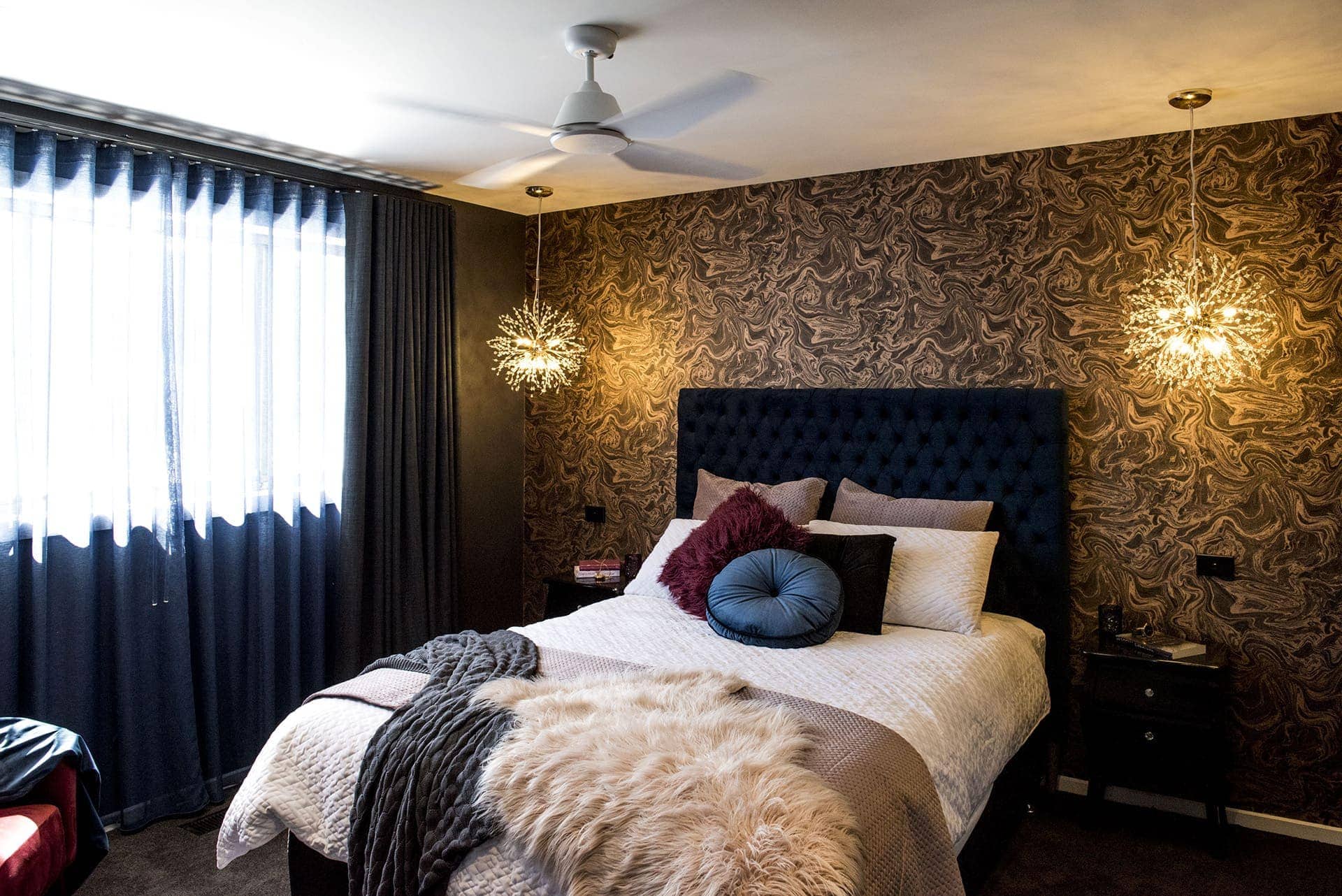 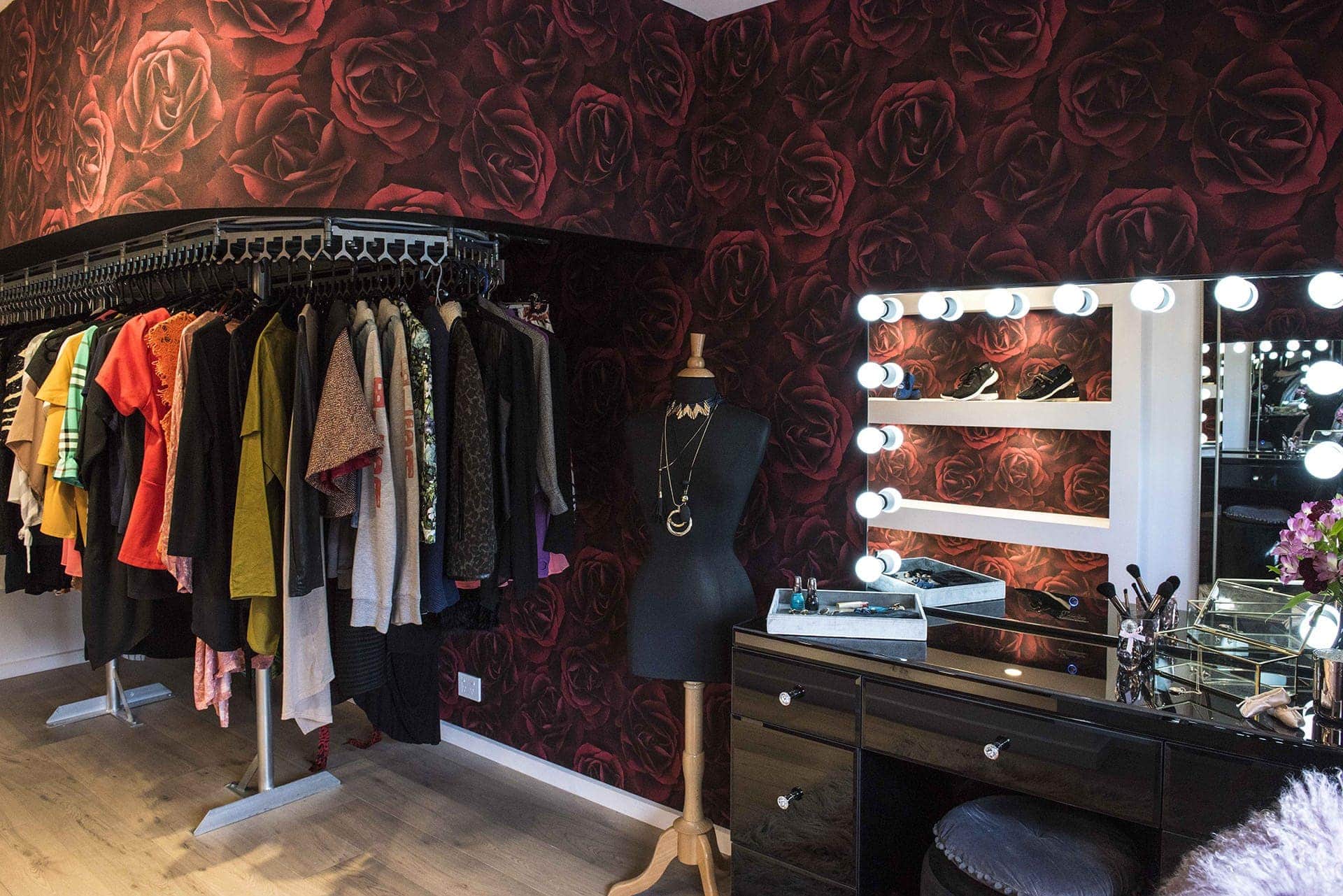 I need Sunglasses and a Wine Immediately

Ideally, the sunglasses required to enter the bedroom and robes are the darkest you can find. Like the darkest legal tint on car windows. I want them so dark I can barely make out the features in the rooms. I also need to be two wines in to cope with everything going on in the master bedroom. Three wines preferred. Maybe one of those giant plastic margarita cups you get in Vegas that hang around your neck while you shop at 3pm in the afternoon. Or was I the only one who drunk shopped when I was there?

And when it comes to both the dressing room and the walk-in robe, let me say this: if I had a closet this ghastly growing up I would have come out of it a lot sooner! They’re both really quite bad.

All jokes aside, I’m happy to go on the record as saying I can’t see the wallpaper in the master working in any scheme or space. I’m sorry to the brand who produces it, but it’s just not something I can be on board with. The bed is good. We can keep the bed. The bedding is good. We can keep the bedding too. Everything else I’m ready to send to Elton John’s place. You just know Elton would love the faux fur and the pendant lights.

If it takes balls to be dandy, I’ll gladly remove mine. This quote-in-wardrobe feature below is not cute. 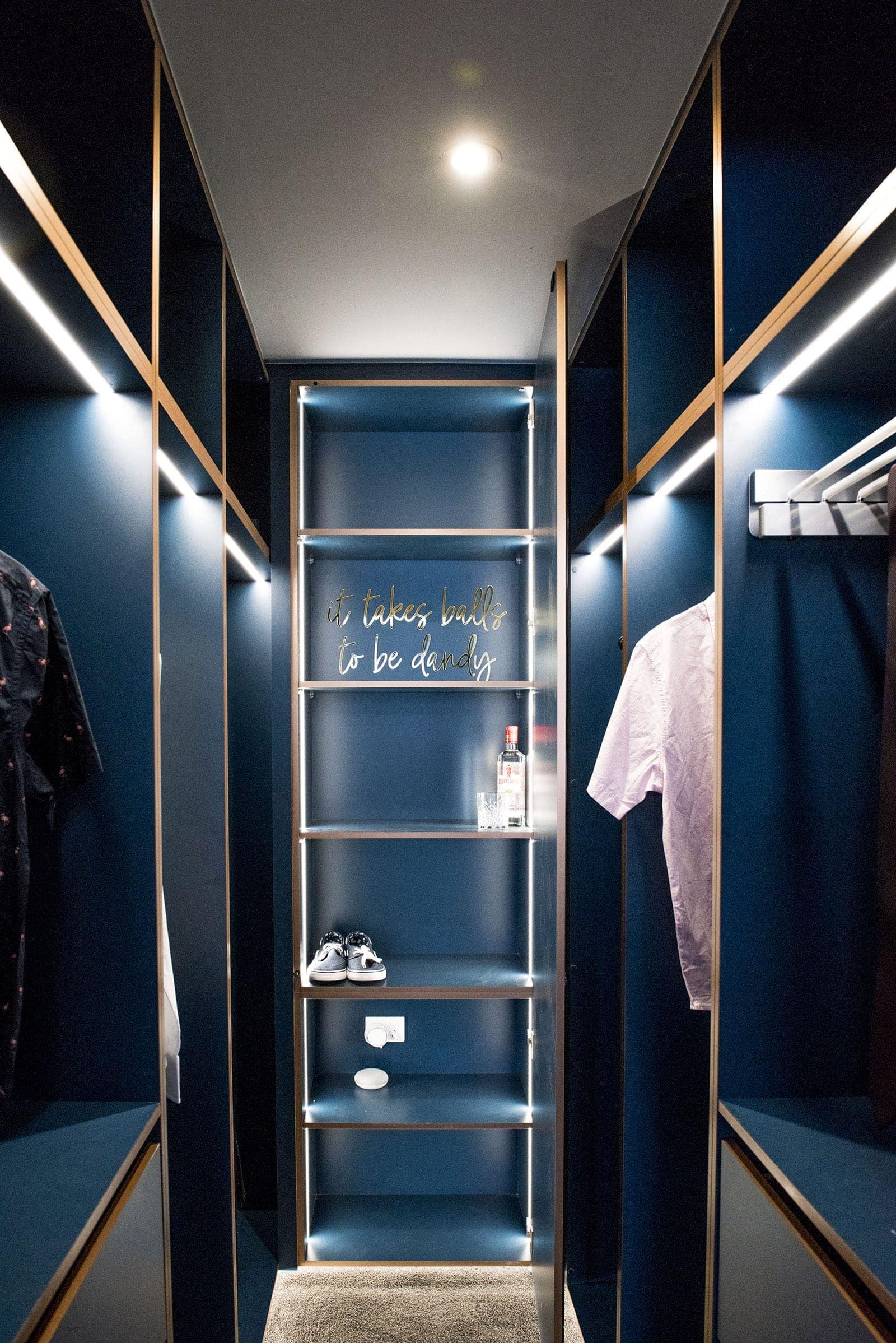 Above: One of the less impressive moments of the House Rules 2019 Pete and Courtney Reveal. What did you think of it? 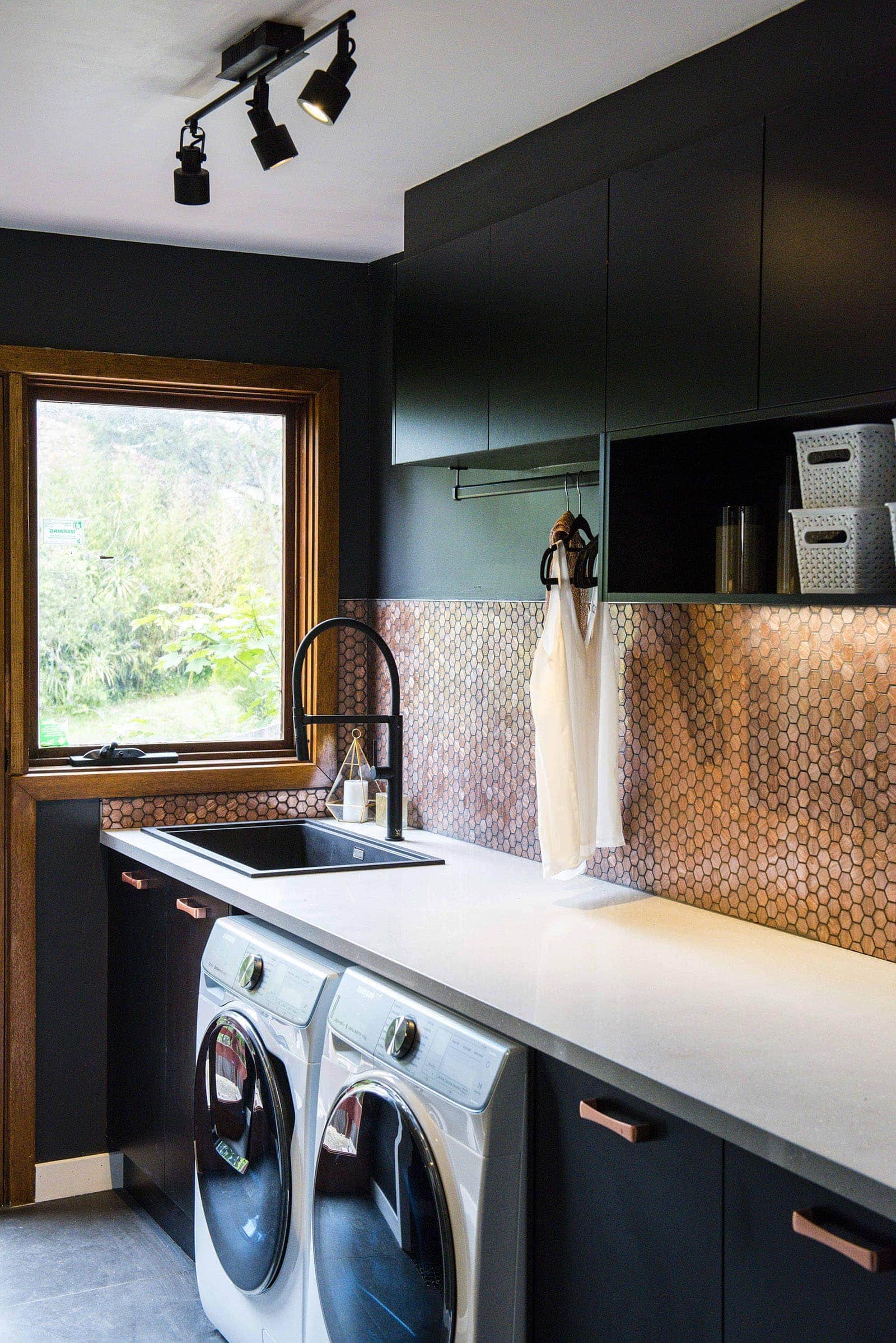 We’re Ending on a High: I Love the Laundry!

And you thought the House Rules 2019 Pete and Courtney recap was going to be all jokes and negativity. I swear I just type exactly what comes to mind when I see these rooms – good or bad! And when it comes to this laundry I have to say this: It is bloody marvellous. It is the best room of the house. It is giving me life and love and all the stars in the sky with puppies shooting out of cannons to land in buckets of lollipops.

This feels sophisticated. This feels high-end. This feels opulent – and there’s no gold in sight! OK, we have one little gold trinket near the sink. But remove that and you have a room that feels contemporary, interesting, refined, and bold.

I really love the contrast between the rich green cabinetry and the organic splashback tiles. It’s a wonderful balance of dark and light, cold and warm. The tiles give you the feeling gold would but without the garishness. Phenomenal job here by Shayn and Carly, who oddly landed on the bottom of the scoreboard. Although we all know it was the master bedroom that did them in. Can’t praise this laundry enough though. What a knockout.

What did you think of the House Rules 2019 Pete and Courtney Reveal? Drop a comment below and let me know.