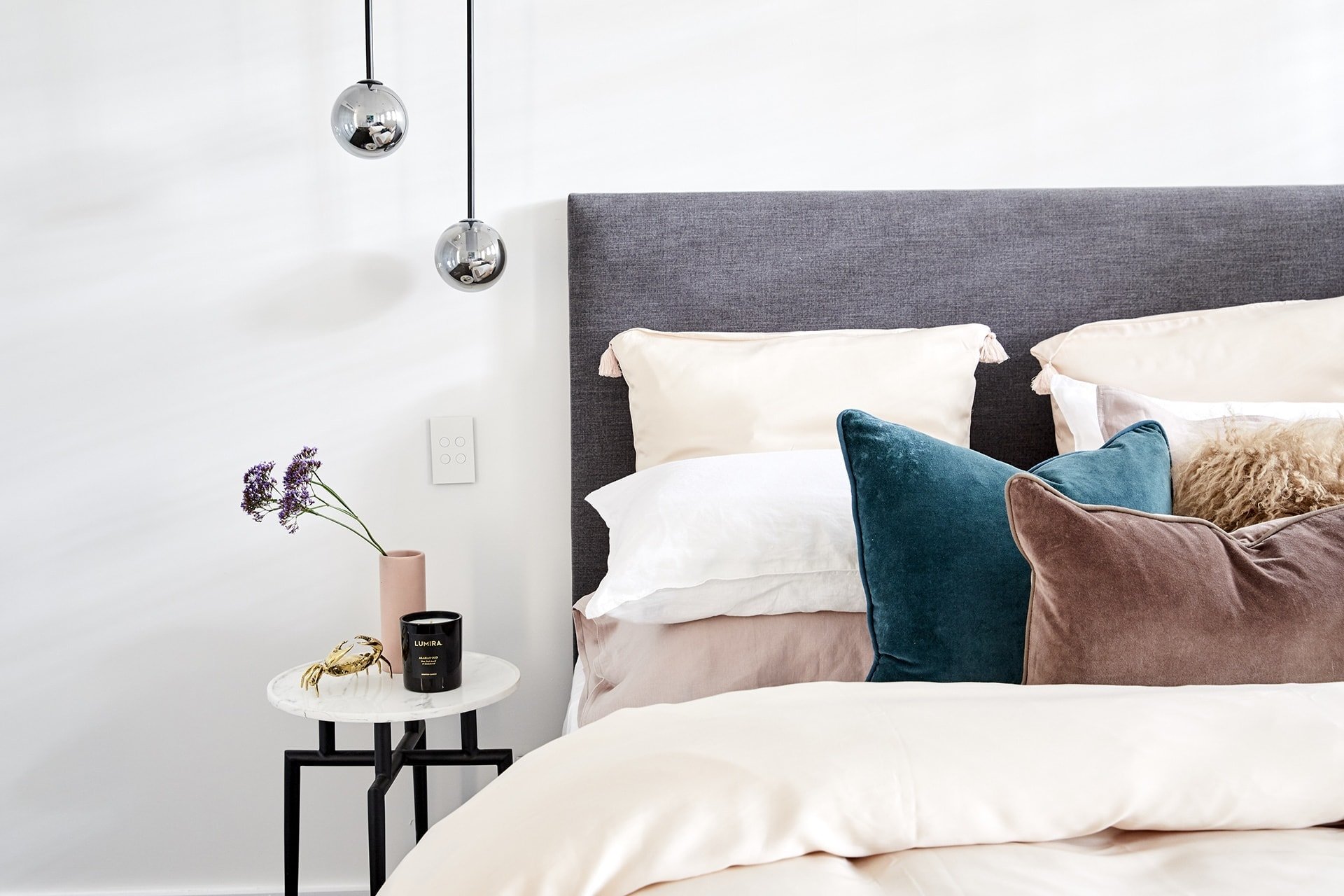 The Block 2018 guest bedrooms were just revealed and I gotta be honest: I don’t know whether I’m Arthur or Martha. Coming or going. Night or day. Up or down. To quote the legendary Kath Day-Knight, “I am one confused tramp”.

I didn’t really love the rooms this week, though the judges seemed to. You know when everyone is telling you something is amazing but you know inside it’s just not? It’s happened to me several times when I’ve had a shocking haircut but my partner has told me it’s cute. I’m experiencing that feeling right now. Are you? Either the world’s gone mad, or I have. I’m not sure which it is.

And it’s not to say that some moments in the spaces weren’t delicious. There were several decor and furniture pieces that were so sweet I developed type two diabetes while watching the reveal. But overall, I do have to be the official Debbie Downer and say that this week wasn’t a show-stopper like last week was. Sad but true.

But let’s delve further into each room below, because I have loads to say. And make sure you scroll to the bottom of the post where you can WIN a $100 Block Shop Voucher just by telling me what you thought of this week’s guest bedrooms! 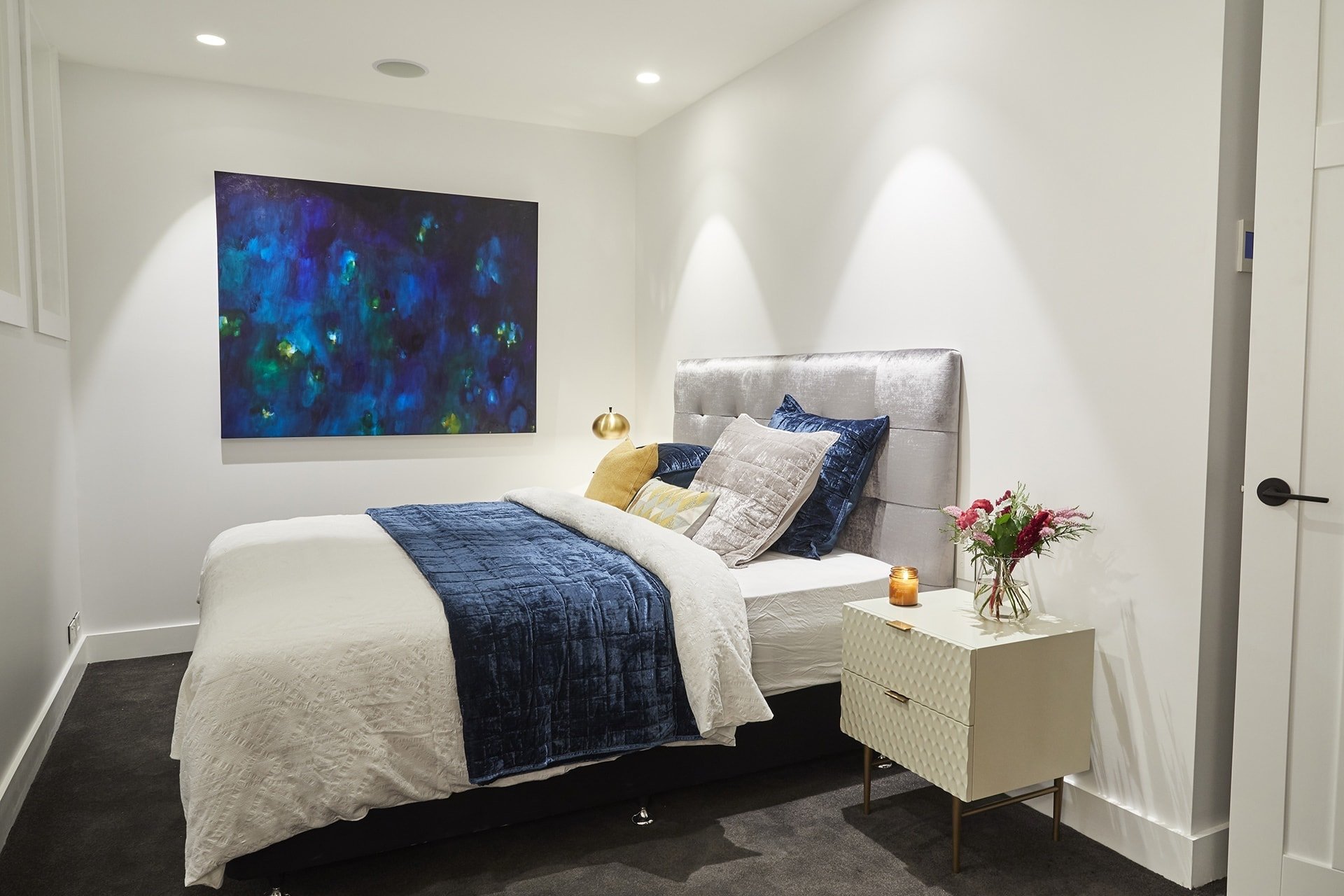 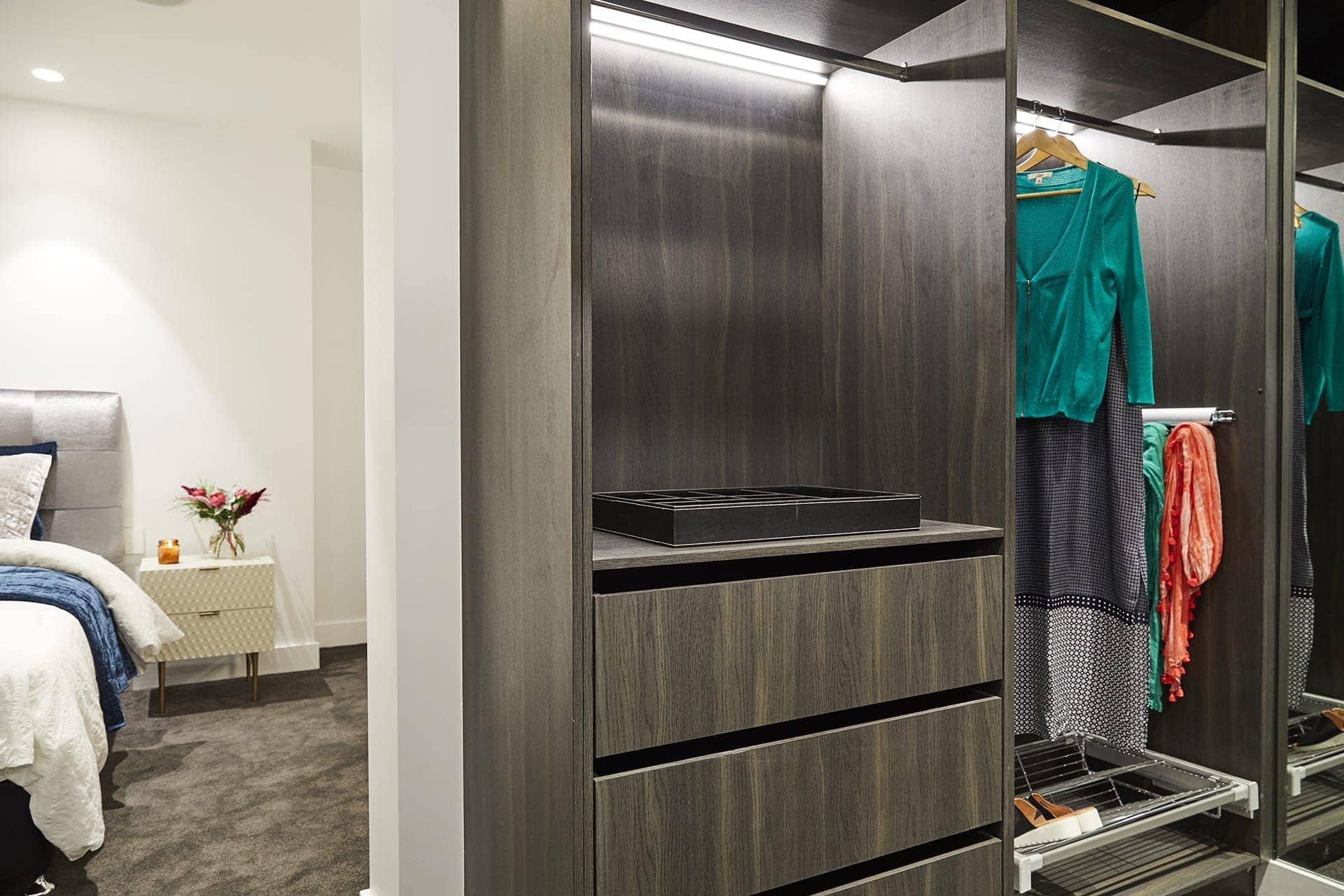 I have to say right off the bat, what’s with so many of the guest bedrooms having walk-in-robes? I know this is a flashy Melbourne apartment complex, but who goes to a friend’s place to stay and expects something so grand?

When I stay over my friend’s place, I’m happy to get a futon, a corner to stash my suitcase, and a mug of Jarrah in the morning. But perhaps that says more about my standards than it does anything else.

Design-wise I’m not loving this room. It feels quite soulless. Kerrie and Spence took up valuable real estate with a walk-in-robe and library nook (truly confused about they included the latter), but left the bed zone tight on space. I also thought the orientation of the bed was a fail. I would have turned the bed so you see the headboard when you walk in. As it stands you walk in and see shutters. Not cute.

Some other things also weren’t working…

It was more than just size and scale that went wrong here. The walls were very stark. I mean, I adore that artwork, but it alone cannot make the walls feel resolved. A soft grey paint would have helped. A subtle wallpaper like these ones would have been even better.

But as it stands, it kinda feels like a rental home. It needs something permanent. Add some pendant lights above those gorg bedsides or install wall sconces; something to give it some sense of grandeur!

Now don’t hate me for saying this either, but the silver headboard… I just can’t. And the bedsides… completely unfinished on the vignette-front. Why did they not decorate them properly? 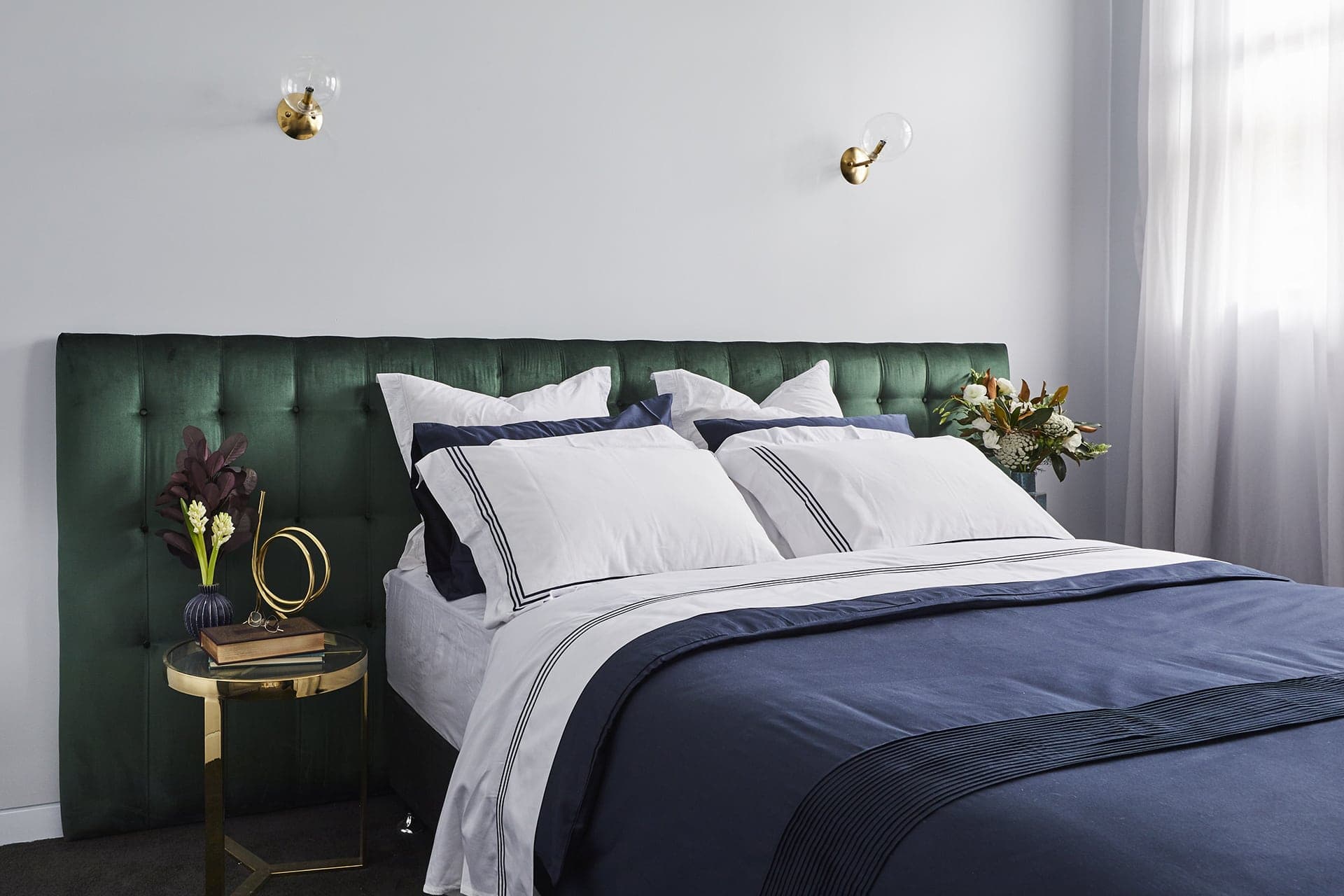 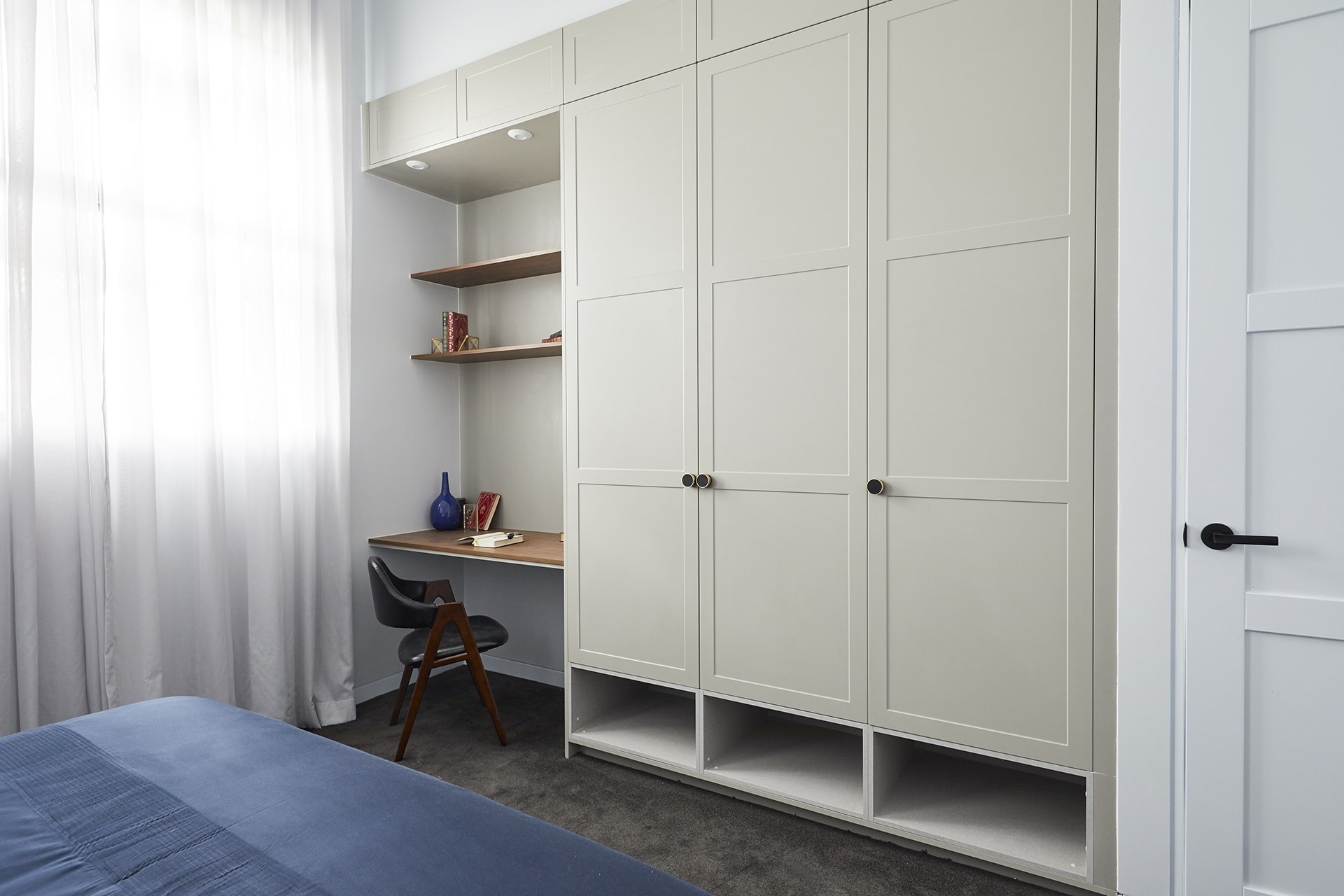 I’n Not Mad at Norm and Jess’ Guest Bedroom

I’m really not mad at all. This room certainly feels more sophisticated than Kerrie and Spence’s space, and it has a lot going for it.

The paint colour is divine, Let’s start there. They avoided a stark white and it’s paid off. What that soft grey does is allow colours, especially dramatic ones, to pop a thousand times more. The emerald green in that headboard is living its best life against that grey backdrop. They get points for the colour choices for sure.

Now, I do have issues with the headboard though. Only because I feel like I’ve seen it before on The Block. Perhaps not that exact one, but similar.

I kinda don’t ever want to see vibes replicated when I watch The Block. I just think of this show as the one series we have on Australian TV that can be a design leader and inspire the life outta us. And as such, I don’t want to see spaces that feel rehashed. But maybe I’m being too harsh. I know there are no original ideas left, but I think Norm and Jess could have thought outside the box a bit more.

The bedside tables are a gift from the decor gods. Love those. I’m also quite fond of the bedding and the way they styled the vignettes. The sheer curtains you know I am fully on-board with. And the wardrobes I think are quite chic. Love the little compartments at the bottom for shoes.

I thought the reading chair could have been a softer upholstered situation. And the wall sconces were an odd choice here. Love the look of them, but pendants would have worked better. Overall though I think this room is still successful, even if it is a little ‘been there, done that’. 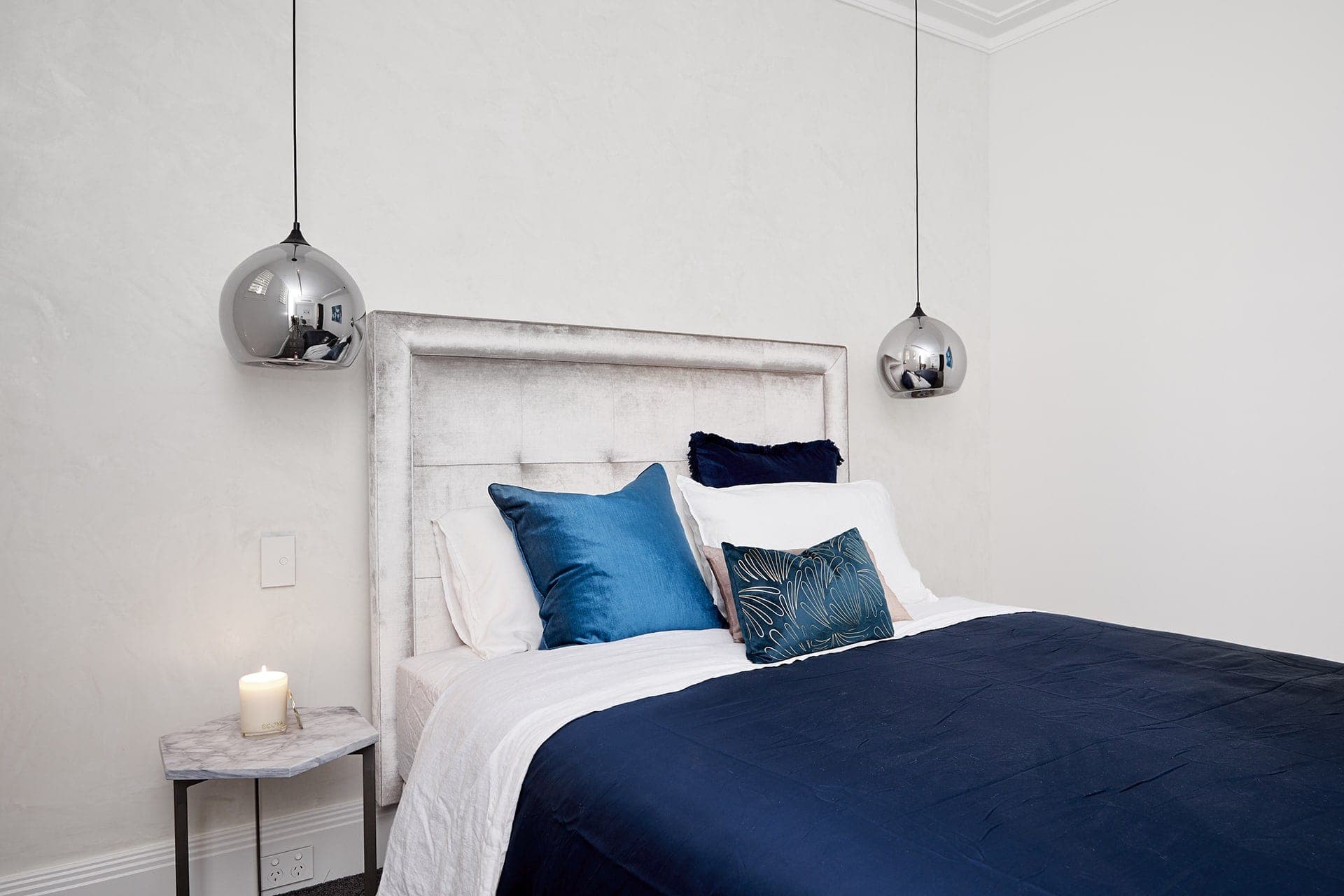 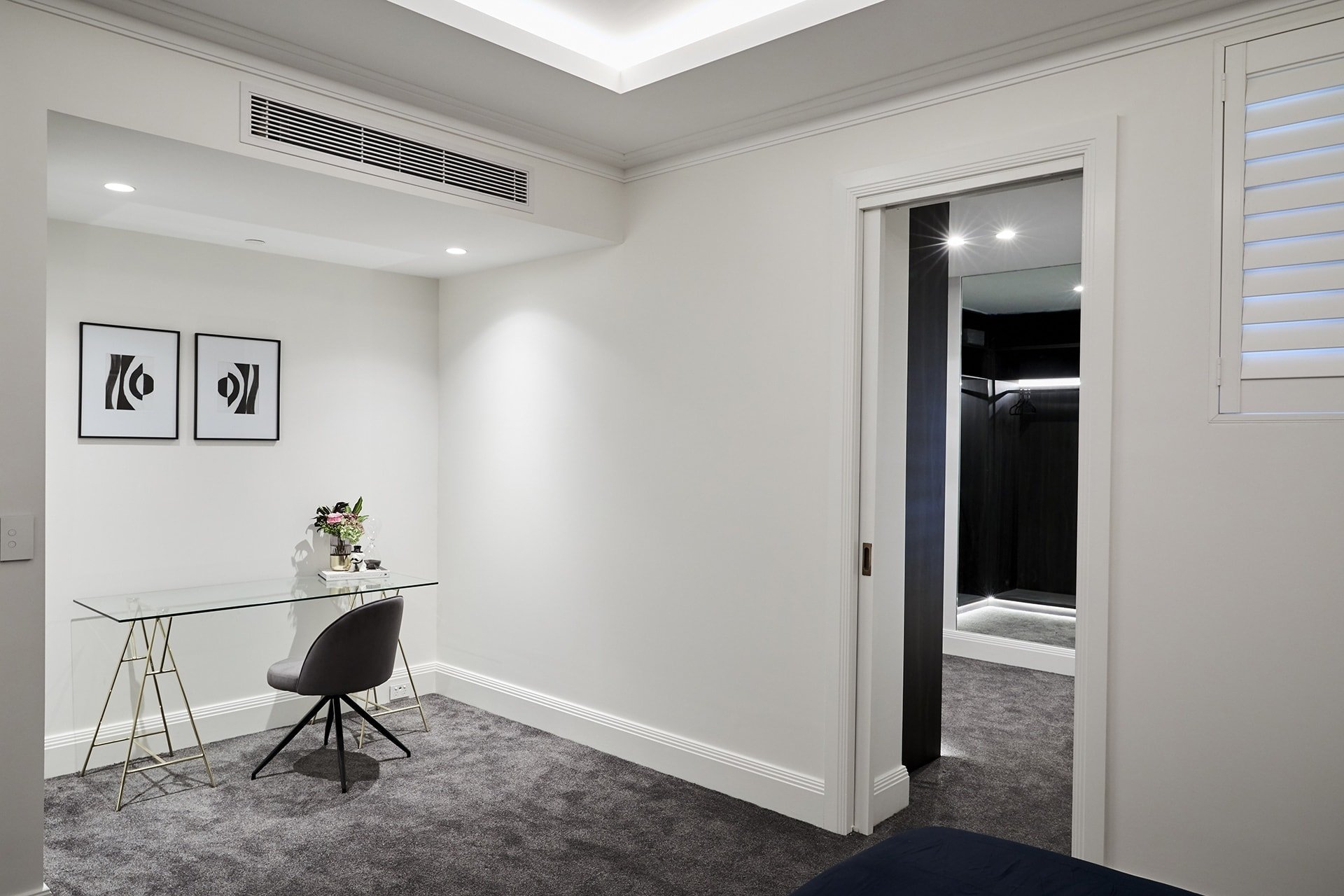 Hayden and Sara: Did they Run Out of Time?

I do mean that as a serious question, I’m not being a raging monster bitch (you know I’m the first to admit when I’ve turned green and my inner hulk is emerging). But truly; we gotta call a spade a spade here and admit that this room feels unfinished.

If you take a step back and examine it, all you have is a bed and side tables, and a desk and chair. There is no oomph. No wow factor. No layers. Even the bed feels naked. It’s so underdressed that it could be mistaken for Janet Jackson during the 2004 Superbowl halftime performance.

Why no life on the walls?

I know I sound like a broken record, but wallpaper. Wallpaper! Why is nobody embracing wallpaper? This is the one thing that can take a room from barren to beautiful and yet I’m just not seeing it utilised.

Wallpaper on all of these walls would have given it a high end hotel feel in a heartbeat. And when you have that sorta presence on the walls you don’t have to do a whole lot in the way of furniture and decor.

But when the room is all white, you do have to do a lot with furniture and decor. But nothing happened. Yes, we have divine marble side tables that I would buy in a heartbeat. But they’re too small for this zone. And nobody styled them. I’m also not mad at the bedding choices, but it needed more. It’s not plump enough.

And that desk zone. Ugh. No shelves installed? Nothing to give it an identity? This room is just not there. 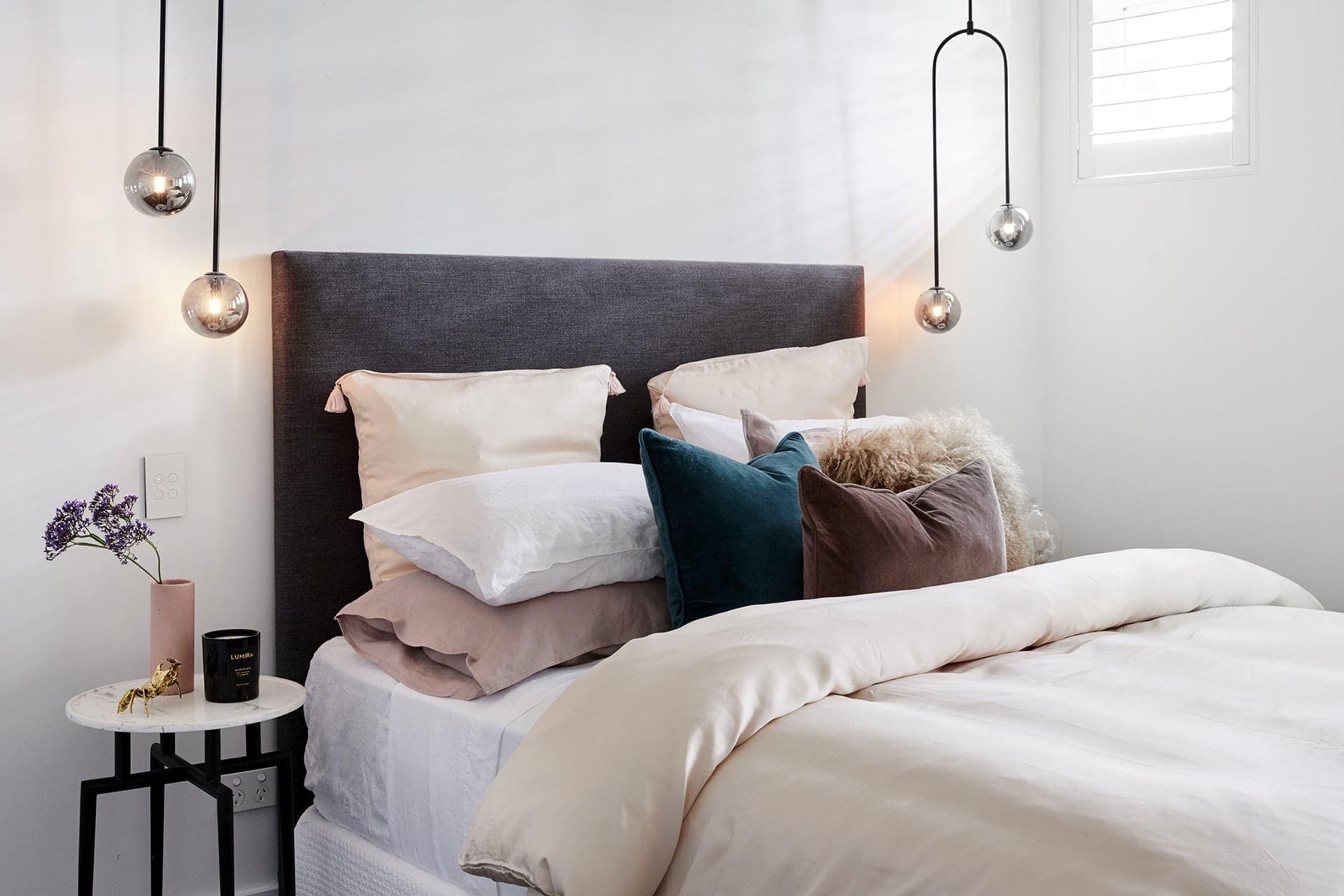 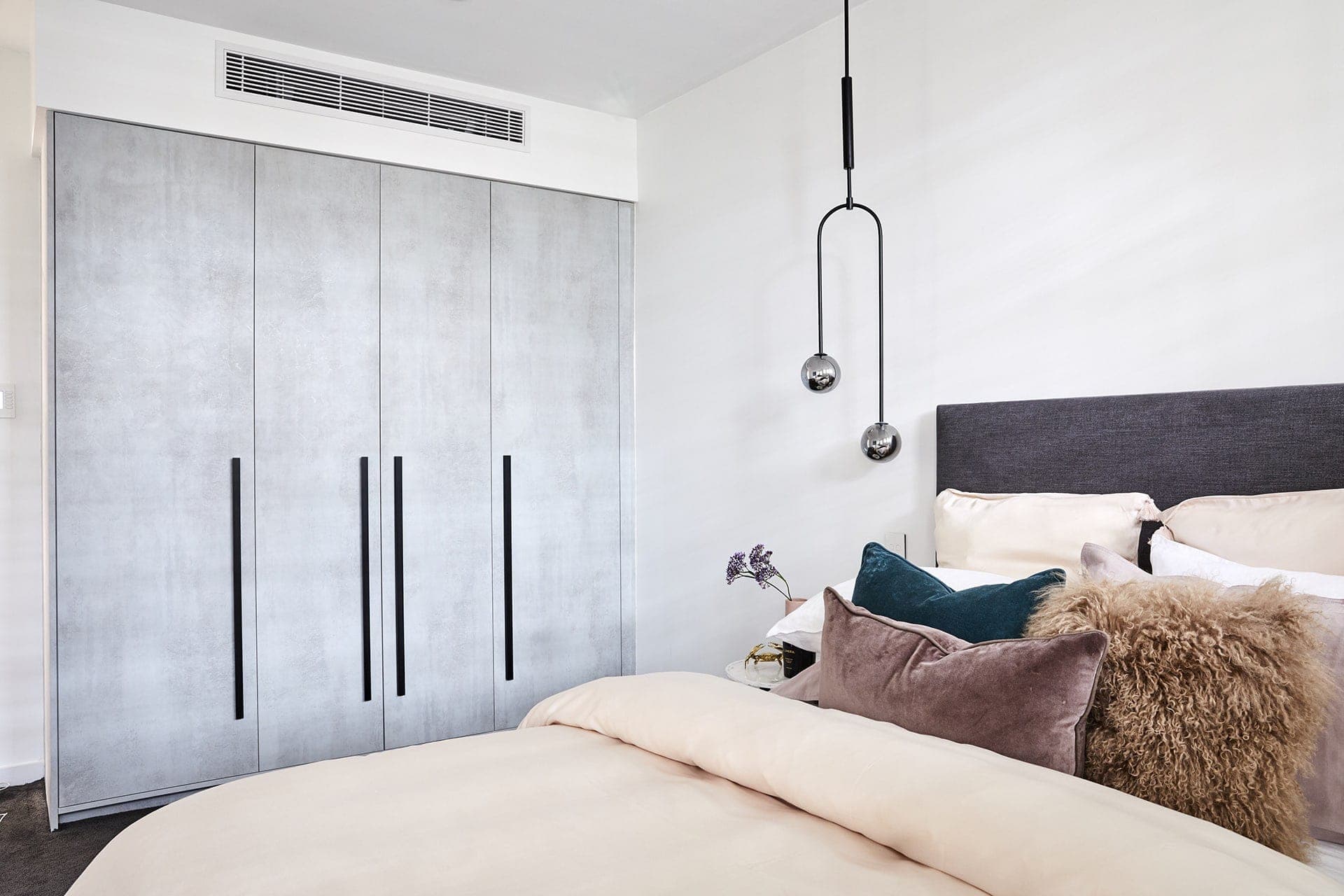 Hans and Courtney: Thank the Heavens Above!

Thank GOD! Thank Jesus, Mary and Joseph. Thank the 12 apostles. Thank the person who let Mary and Joesph use that barn in Bethlehem. And also thank both Pope John Paul and the new one whose name I can’t remember.

Just when I thought things were heading in a bad direction, the universe delivered me Hans and Courtney. And the two of them delivered me a space that is nothing short of phenomenal. I will absolutely be getting into that bed when I tour this space toward the end of the season. I will roll around on the floor. I’m even going to get back into the closet just so I can come out of it again; the wardrobes are that amazing.

I have nothing bad to say about this room. It is a shining beacon of light in an otherwise dreary week of guest bedroom reveals. It is the sugar in my skim flat white. The shiraz in my giant goblet. What more can I say? Turns out, a fair bit!

Let me break down the goodness for you:

This is the calibre I expect from The Block. Everyone else take note. Last week’s bathroom by Bianca and Carla, and this room from Hans and Courtney is what we watch the show for. I need more of this from here on in so I truly hope they deliver the goods. 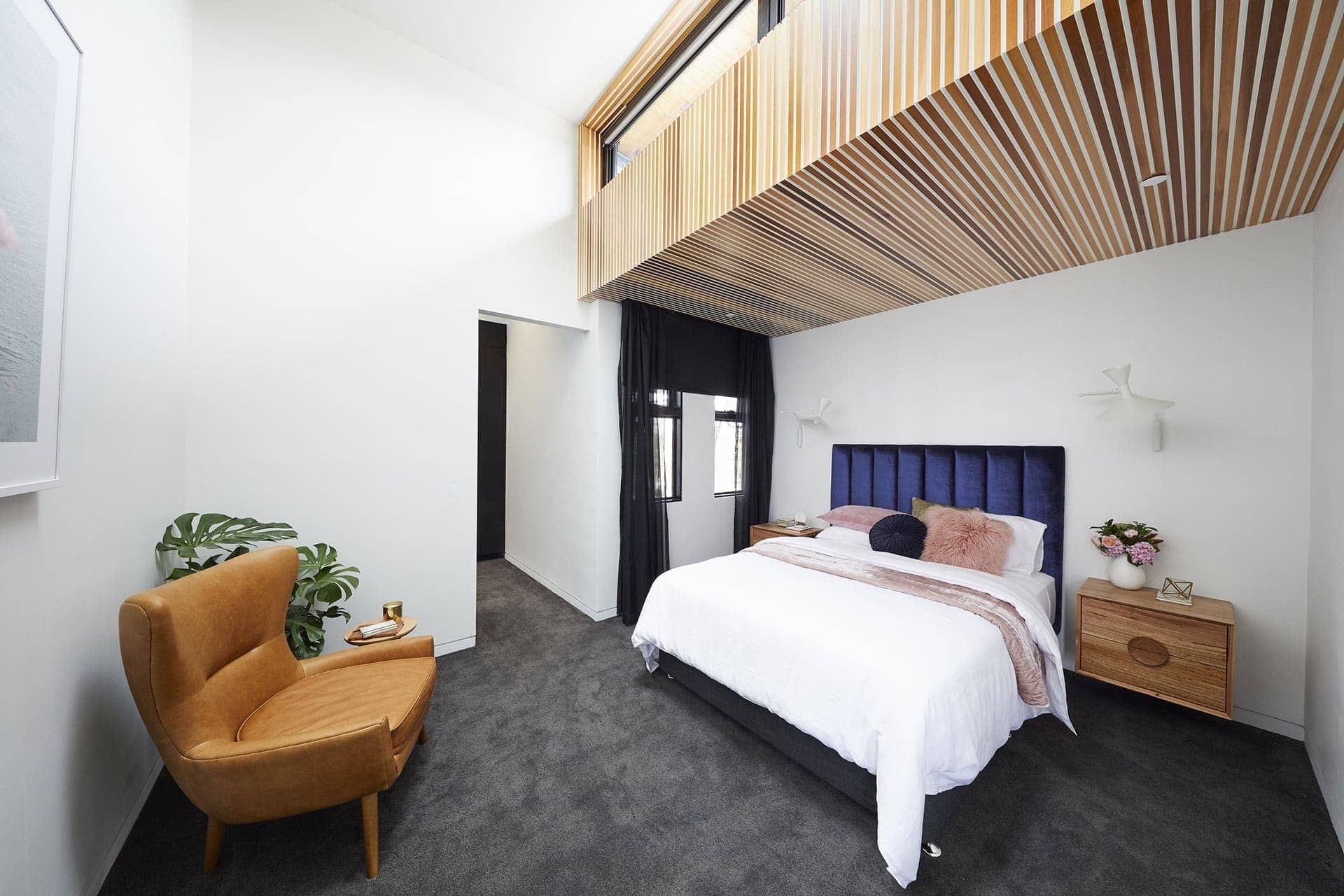 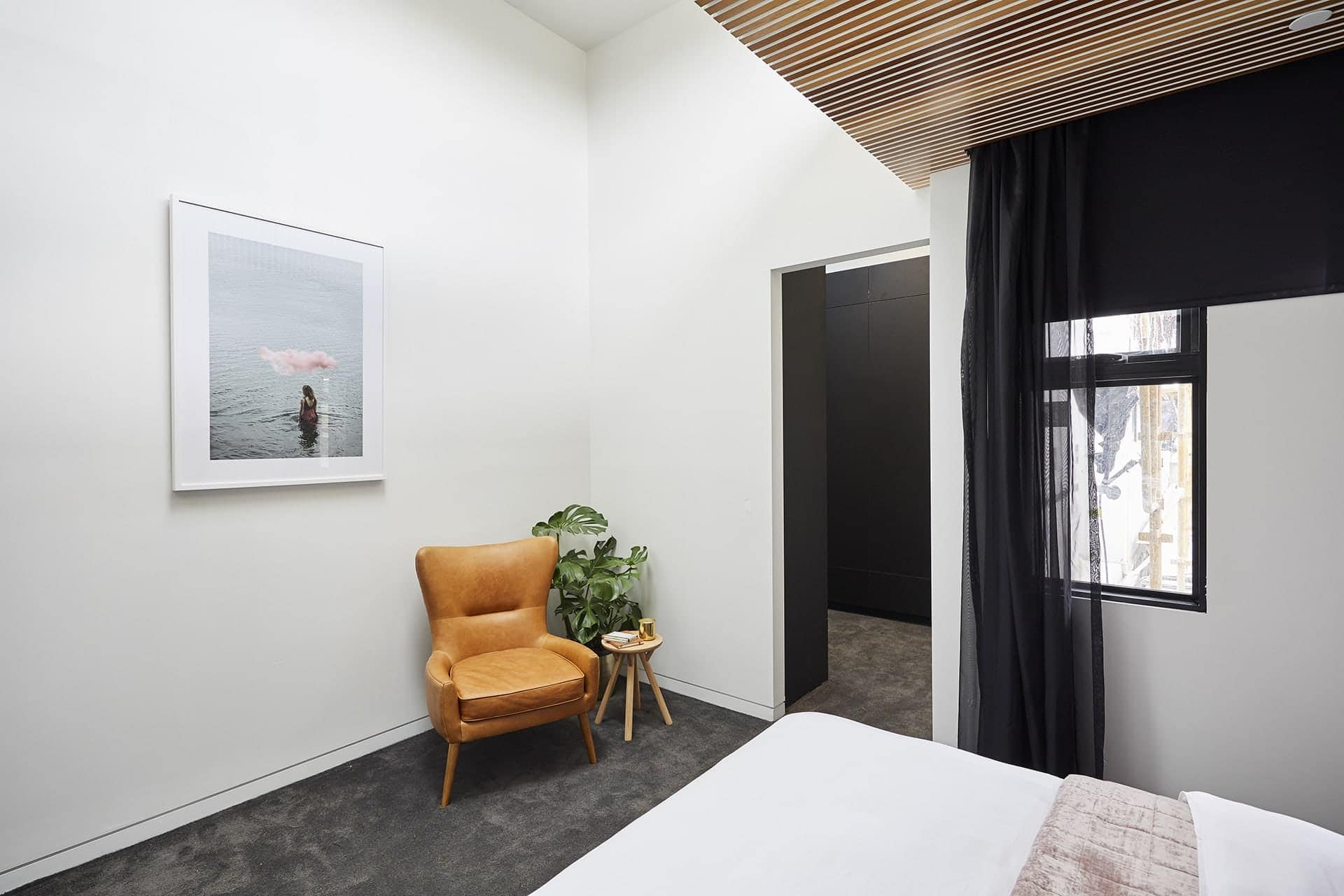 Bianca and Carla: It’s Not You, It’s Me.

I’m willing to accept that when I walk through this room shortly I will probably gasp at the sheer work that went into that timber roof. I will probably wet myself right there and then, which is going to be embarrassing because a lot of people will be present and it’s not the sorta thing you can hide once you’re drenched.

But looking at it on the tele and in these photos… it isn’t grabbing me. I’m not hearing the angles singing in the distance the way I was when I saw Bianca and Carla’s bathroom last week. Maybe it’s just that: I’ve seen the timber already.

Speaking of ‘before’, the headboard and everything on the bed reminds me of The Block from last year. The headboard looks mighty similar to the one Josh and Elyse used in one of their bedrooms last season. And the bedding feels a little Ronnie and Georgia. Again, it’s not bad, it just feels done already.

The walls are an issue for me here too

I also know that because the timber roofing is such a dominant moment in the space, that the girls probably wanted to keep other walls subdued. But the white wall across from the bed needed its own feature. I’m going to say it again: wallpaper. Something soft would have looked good here. Or at the very least, a much larger artwork. I do love the artwork they chose, but not for such a large wall.

What I am gushing over is the side tables attached to the wall. Finally: a team who gave the room some permanence. Something you can’t just pick up and run out of the room with. They get a huge seal of approval from me there. And the good news is that you can get the side tables with legs if you don’t want them wall-mounted!

Lastly, I am a fan of those ballsy wall lights. It takes guts to install something like that, so they also get a thumbs up there. I haven’t seen these used much before so it feels quite now and fresh and 2018.

Every Sunday night I’ll be giving you the chance to win a $100 voucher for The Block Shop. The winner will be announced in next week’s Block recap (right here on the blog), where you can then enter again to win. Repeat each week until the end of the season. How exciting!

TO ENTER TO WIN:

Simply pop a comment below telling me what you thought of this week’s reveal. It’s that easy!