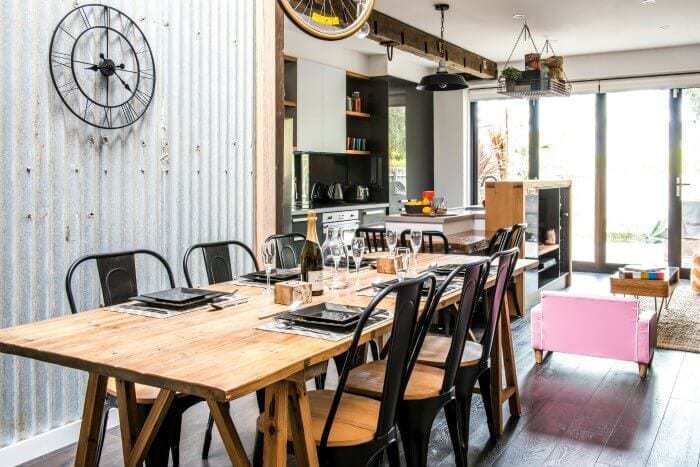 There wasn’t a dry seat in the house on Sunday’s whole house reveal, as homeowners Claire and Hagan walked into their brand new home.

Previously referred to as a lego home – and in dire need of help – the couple’s older house was nowhere to be seen as the teams took things up a notch (literally) by adding a second storey. After living in a cramped one bedroom abode for three years, Claire and Hagan were beside themselves as their new entertainers home was revealed.

Twins Luke and Cody came out on top this week with their dining room and master bedroom.

Joe Snell scored the boys a 10 for their interesting interpretation of the warehouse raw house rule, and commended them on their use of industrial and upcycled materials.

“Your zone was so good I wanted to give it 11,” Joe told them. Fellow judge Wendy Moore was also impressed with Luke and Cody’s efforts.

“Your master bedroom was masterful because you did a few simple things really well,” she said. “Your black framed mirrors worked perfectly with the black framed windows so it made the room feel huge”. 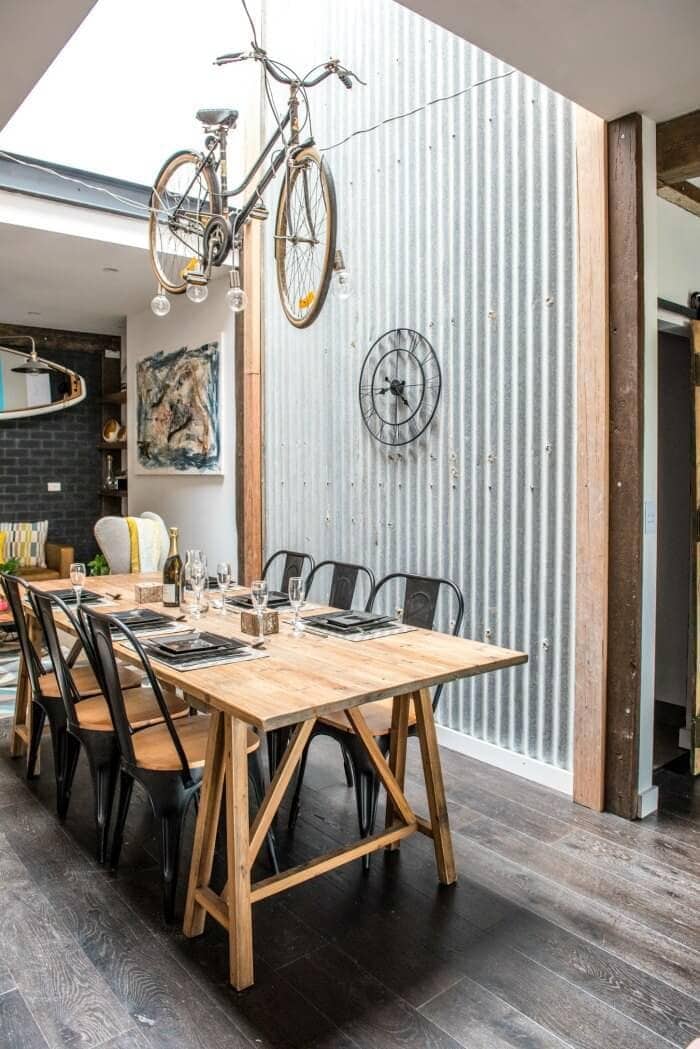 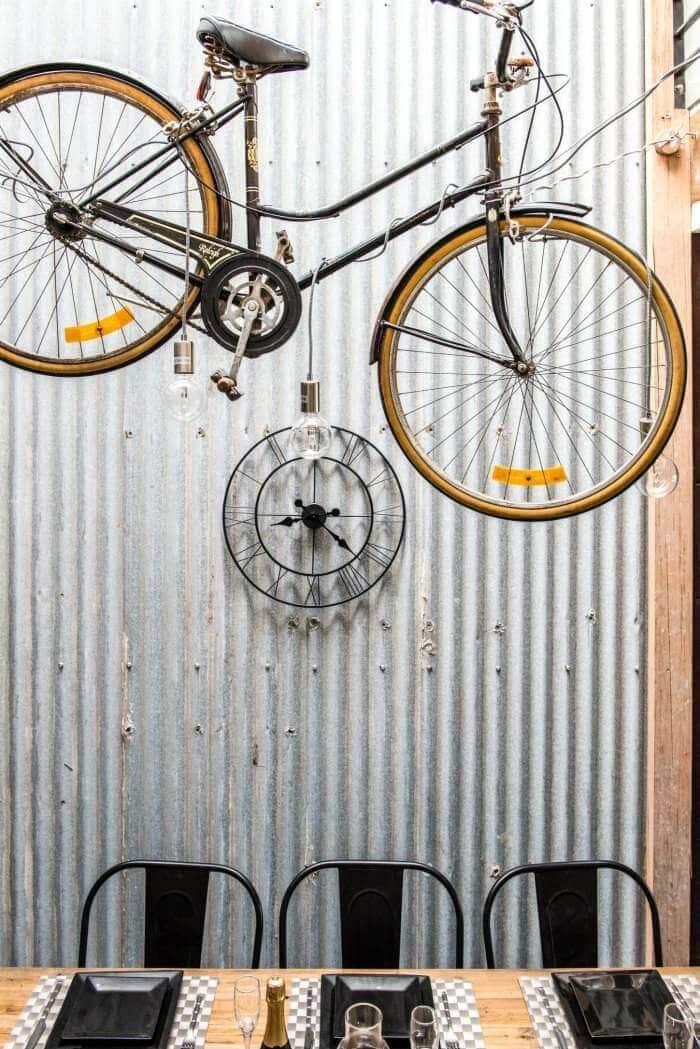 I have to say that this space is clearly the best of the season.

Industrial interiors are so hard to get right because so many of the materials are quite heavy, dark and masculine. Ensuring the space still feels light and bright – and ends up feeling balanced – is not easy, but Luke and Cody managed to do it by utilising a variety of materials and finishes. This approach made the space feel well resolved.

The light and airy feel of the room was also helped by the high ceiling above the table. The bike-turned-chandelier was an amazing idea and does look wonderful floating above the table like that, even if the execution wasn’t amazing. It would have looked nicer suspended from above as opposed to the sides.

The only thing the space needs is for that clock to be removed off the wall (it takes away from the bike) and for a table runner in a linen fabric to be cascading down the middle of the table with some flowers and candles on top of it. But that’s just me being picky, because this room is a stunner. 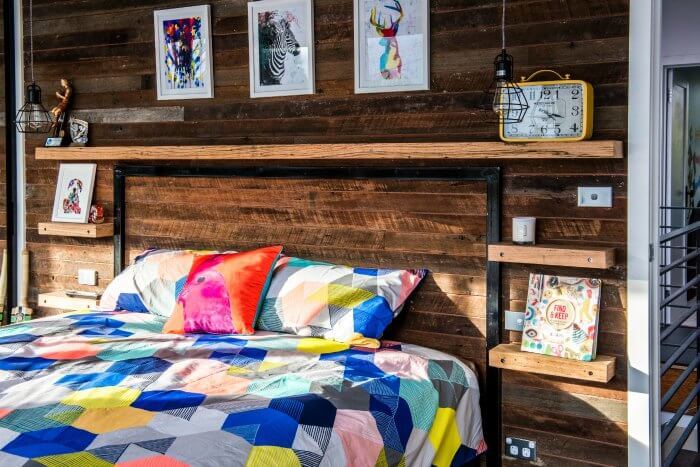 I am just as open about what did work as what didn’t, so I’m afraid to say that there were a few issues in the masted bedroom.

I think the concept here was a really good one, and they interpreted the house rules quite well. Where Luke and Cody go wrong is in finishing touches and creating a sense of balance between the elements here. Both the colours, scale and weight of the room is off and needs work.

The timber wall is amazing, but there was too much of it. Or, it wasn’t balanced out enough by a softer element. They created a steel frame in black to almost act as an outlined bedhead. That needed to be filled in with either a lighter coloured paint or an upholstered fabric. That would have added some much-needed softness to the space. Without it, the room is too hard and heavy.

The styling is also disappointing. The bed needed at least four more pillows on it along with a few throws (like this bed). It’s so one-dimensional as it is and could have been much cosier.

All of the knick knacks around it seem like an afterthought and are all a bit small. This is the start of a great space, but it just goes to show how much good styling can transform a space (or how much bad styling can hurt it). 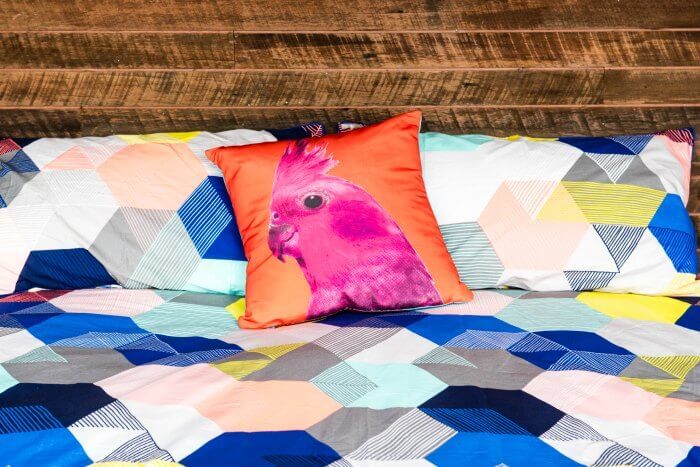 Rose and Rob were the first team to leave the House Rules 2016 competition.

“It’s exciting for us,” Rose reflected. “We have a home now and three boys who we miss terribly so there is definitely a silver lining. To walk into our freshly renovated house was mind blowing. This is the only competition you enter where even the loser wins”.

The leaderboard has been wiped clean and the teams this week will have to re-do a room in their home with a $5000 budget.

What were your thoughts on this week’s reveal? Do you think Rob and Rose deserved to go? Sound off in the comment section below.