Now, I know there were some issues in Queensland. And by issues, I mean a cyclone. So I can kind of understand if some elements weren’t finished as well as they could have been.

But beyond that, there were still some mistakes mixed in with some OK design moments. Let’s take a look at the best and worst bits below, because it was definitely a mixed bag. 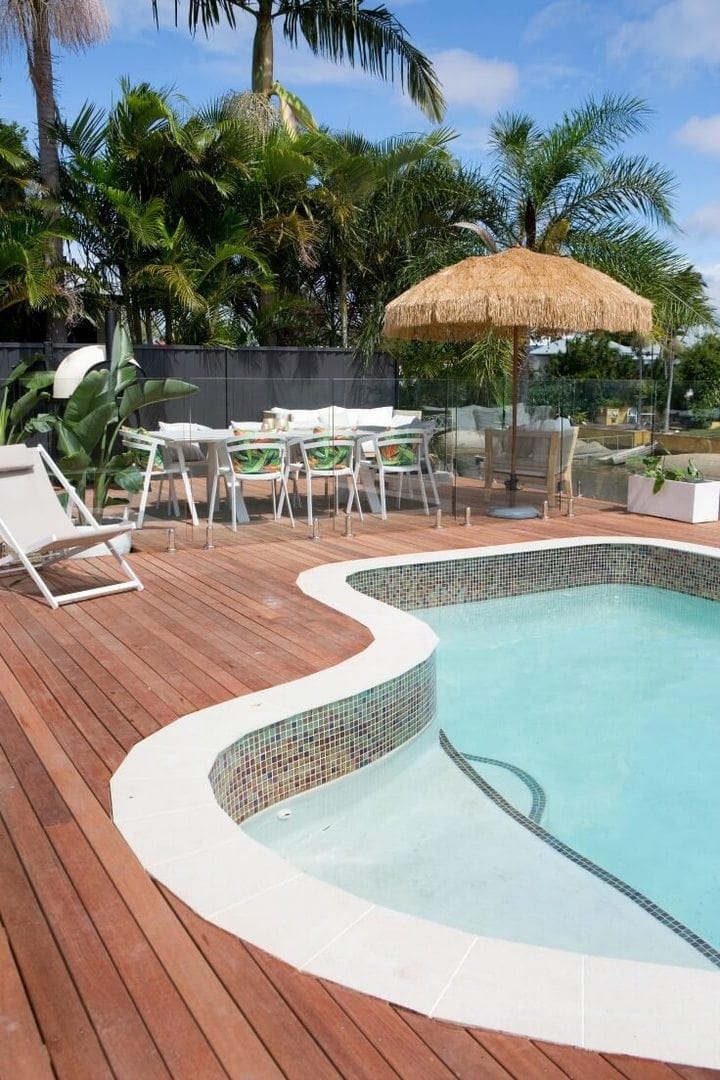 Backyard by Sean and Ella

The backyard, in my humble opinion, was head and shoulders above the front yard. You can see all the photos in the slideshow below, and the difference between the two spaces is quite obvious.

The judges knocked the position of the cubby house because it blocked the view. But only in one corner of the yard. I don’t see the big issue here. I think in comparing all of the spaces this is one of the better ones.

Sure, the styling wasn’t great. But it never is most of the time on this show. But even on furniture choices alone, Sean and Ella make the better decisions here.

Front Yard by Kate and Harry

The front yard is the zone I have the biggest issues with. It was lacklustre in every sense of the word.

I’m with Drew. He said that the entry looked like a cheap Thai restaurant and I have to agree. The bamboo, the droopy plants, the concrete pavers. There was nothing to wow you or hint at what’s to come in this property. They needed to paint the wooden beams a deep blue/grey so your eye was drawn to something in this zone.

The sad path of pavers leading you up to a cheap seating area was a huge miss. 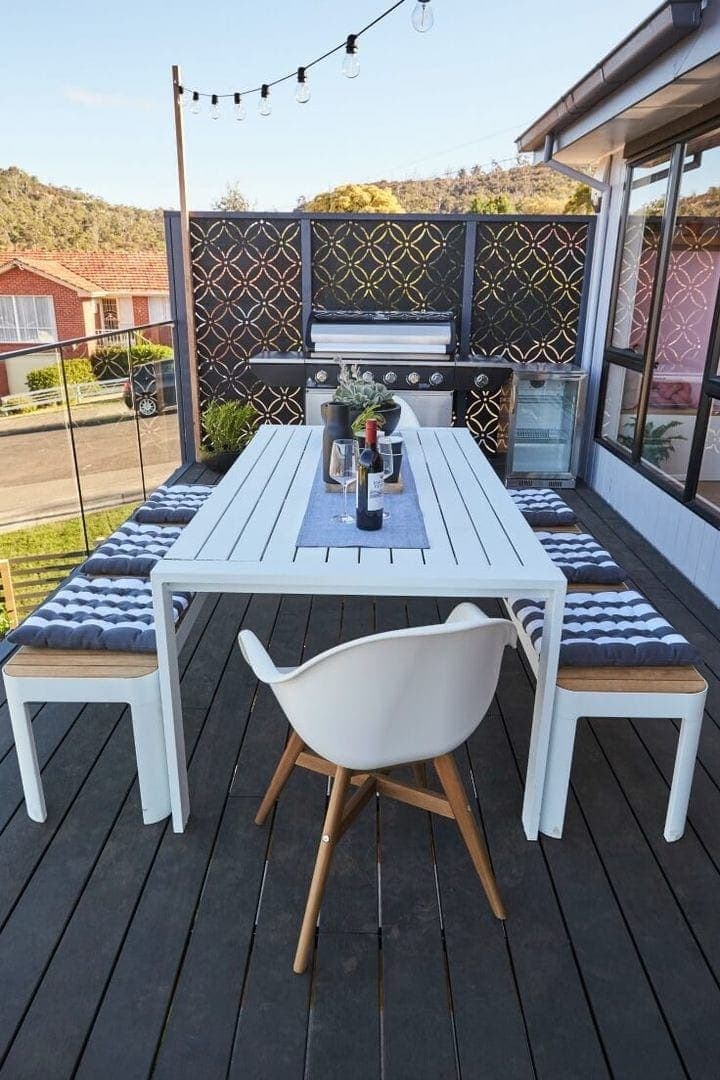 Backyard and Entry by Andrew and Jono

The entry was an absolute stunner, and I think Sean and Ella definitely come out of this competition with the nicest, most cohesive home. The stairway up to the door was amazing, and the colour palette of the home’s overall facade is a winner.

The choice of plants – both in the garden and on the entry deck – was also sublime. They did really well.

Sadly for Andrew and Jono, the love stops there. The seating area in the backyard was so sparse and unappealing. Some fairy lights hunt over an L-shaped outdoor sofa is not enough. Most of the teams seem to struggle to come up with a concept and develop it into a real wow moment. It’s just some furniture plonked on cement.

Front Yard and Deck by Aaron and Daniella

I agree with LLB about the deck. He said it looked “furnished in an obvious off-the-shelf Ikea-ey way…it’s cheap horrid stuff.”

Now you know me; I won’t have anyone bashing my IKEA, but it did feel a bit pedestrian for a renovation show. I mean, we do watch these shows wanting to be wowed and inspired. This is an outdoor dining area you’d see anywhere in Australia. It definitely needed more thought.

Down in the front yard, the fence was an absolute fail. Why would you bother building a fence that everyone can see through as they drive by? And why would you then, after building such a fence, install a fire pit near it so that residents can wave to you as you sit by it at night? It was a truly bonkers concept.

I love the idea of the fire pit, but the positioning was a fail. And the pink wall was a major no. 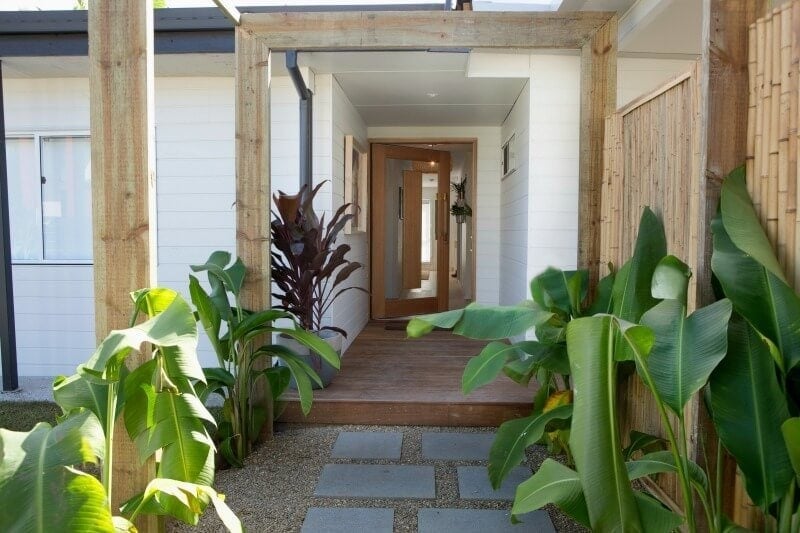 As you can see, the Aaron and Daniella’s entryway was lacklustre in many ways. 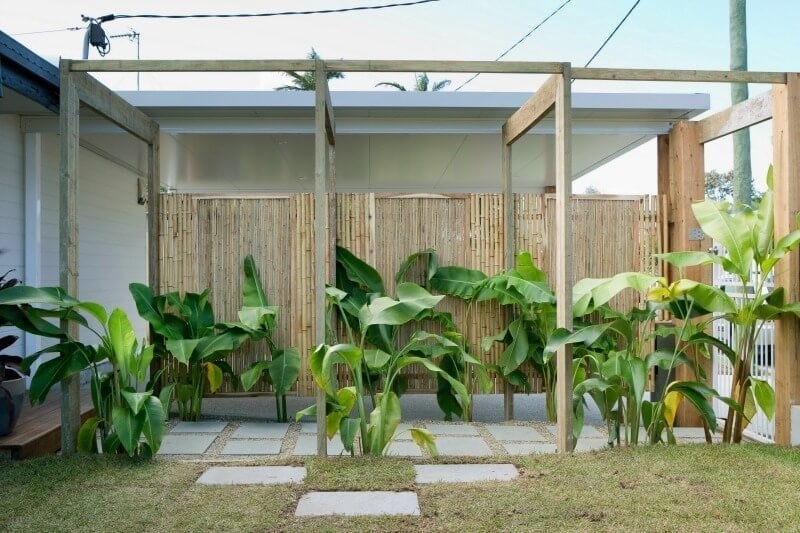 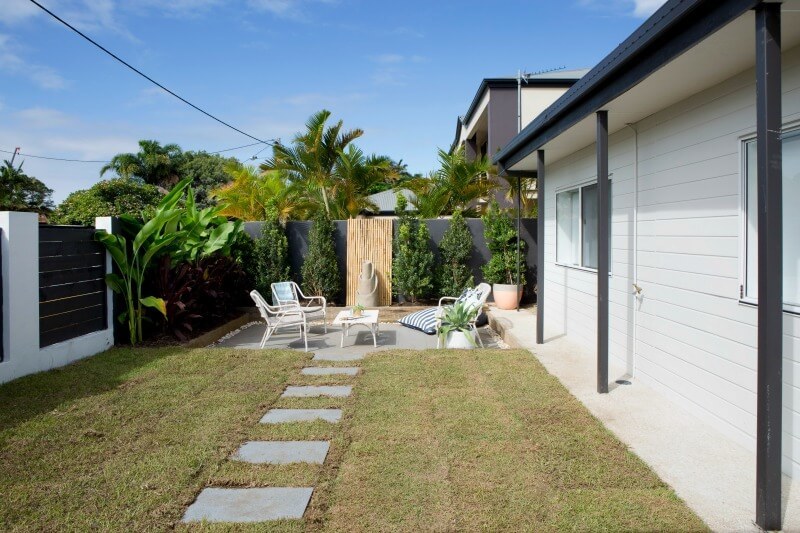 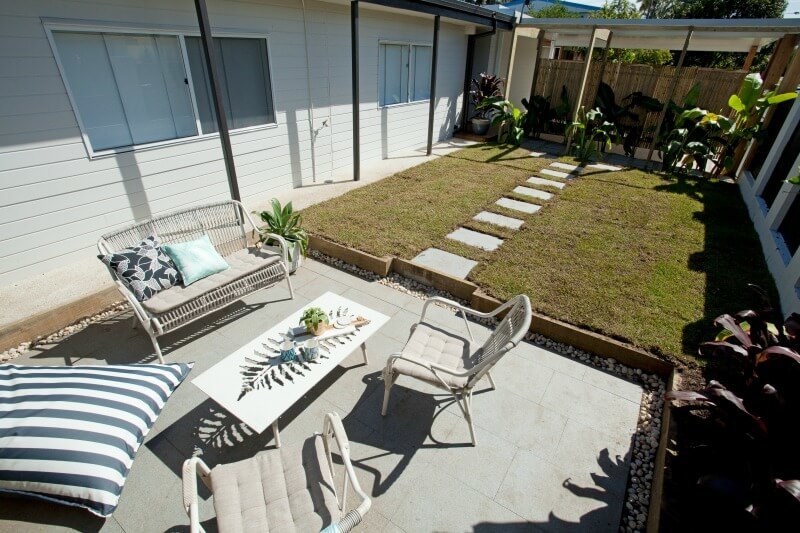 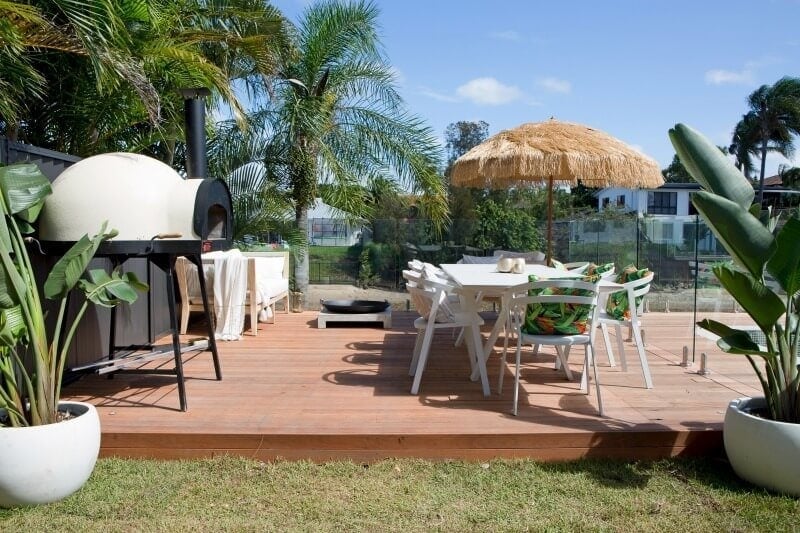 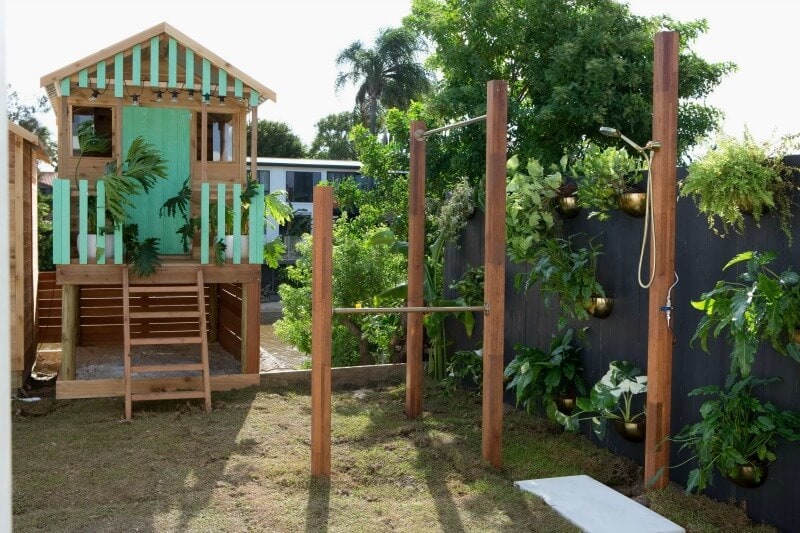 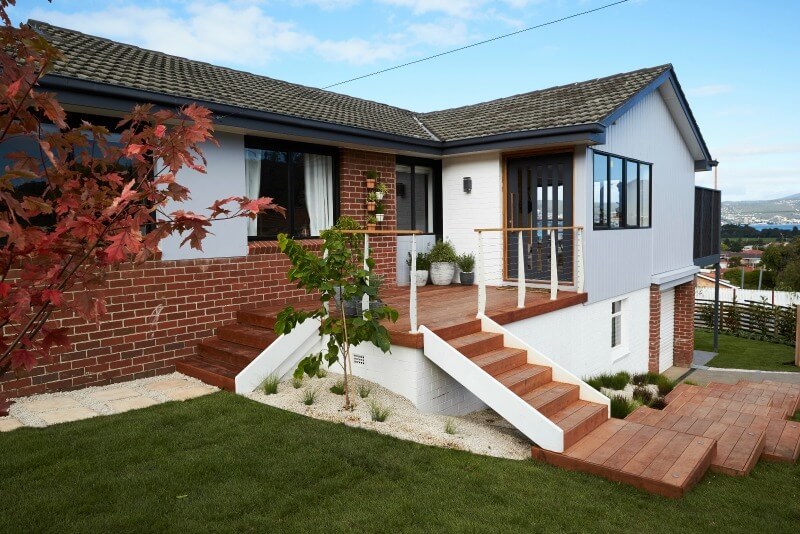 Andrew and Jono did a KILLER job on Sean and Ella’s entry area. 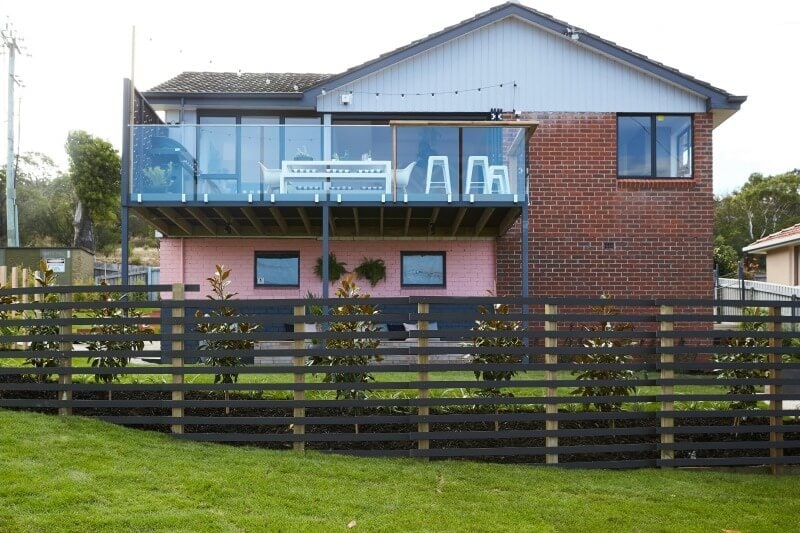 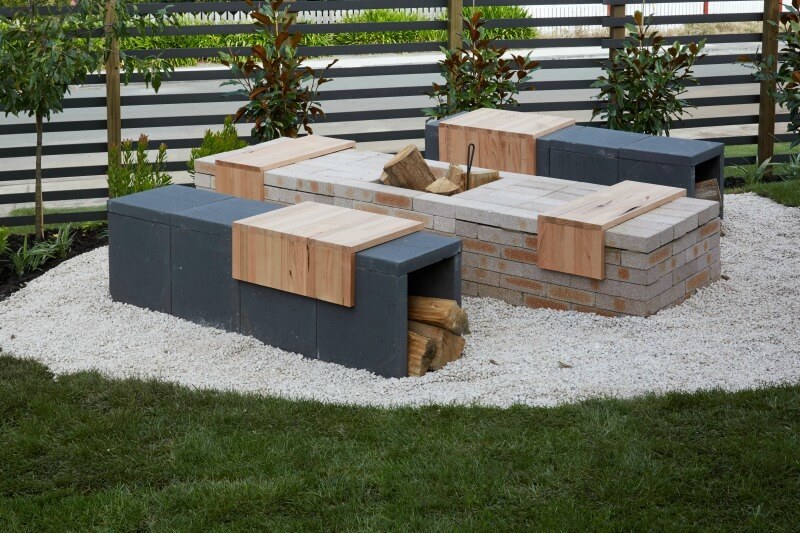 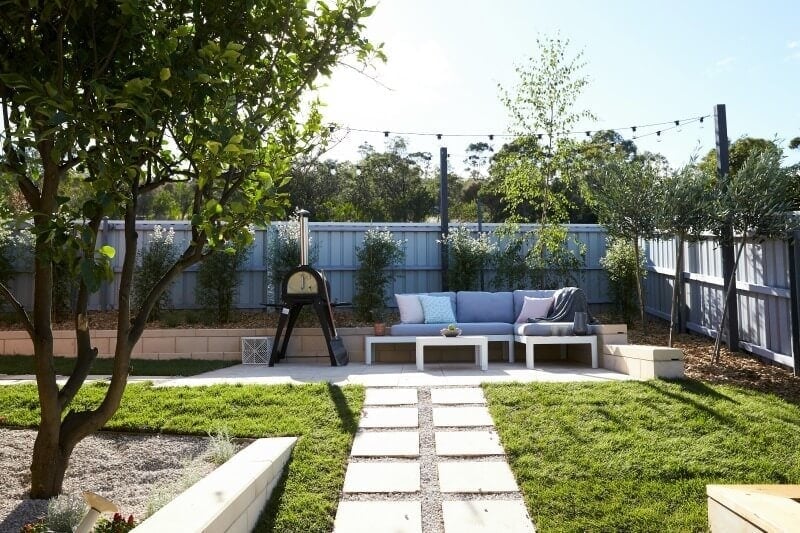 What did you think of the first House Rules 2017 Garden Reveals? Drop a comment below and share your thoughts!