This week on House Rules 2017, the teams proved that even when let loose in your own home, design fails do happen.

Given 24 hours to completely transform the zones they disliked most in their abodes, the teams produced rooms that ran the full gamut of good, bad and ugly.

What I found most surprising was the judges feedback. Some of the spaces that looked like ‘before’ shots they actually loved and awarded good marks. Let’s dive right into looking at some of the best and worst zones of the week – because I’m dying to know what you thought! 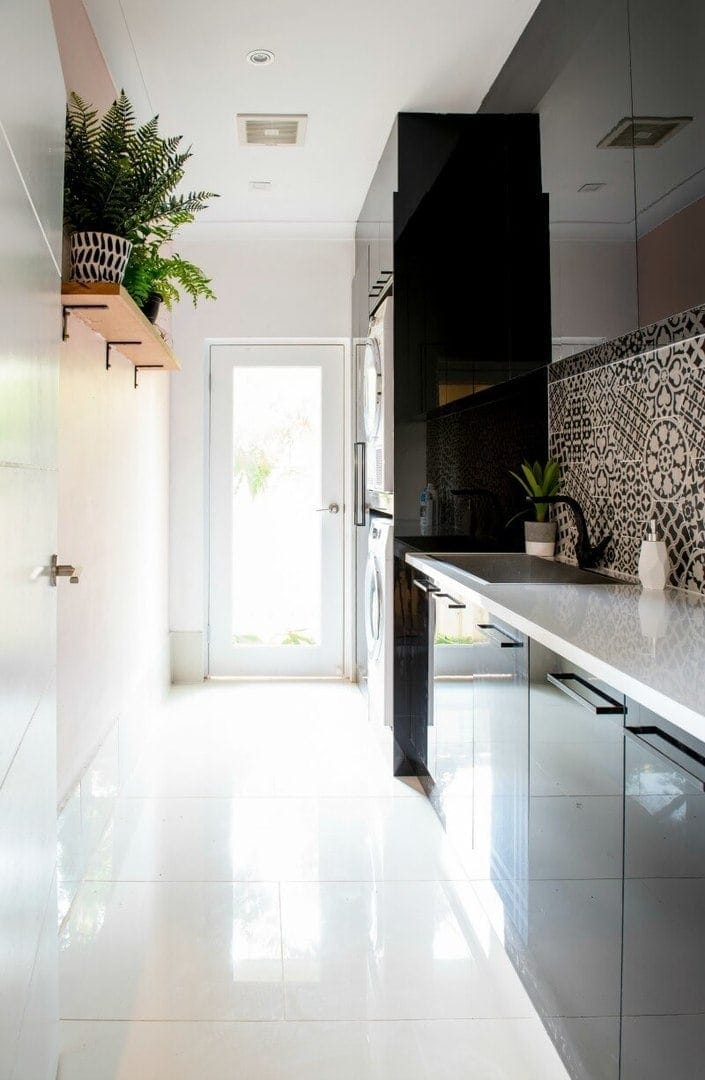 Kate and Harry hit near rock bottom this week after the judges scored their laundry and living room.

The laundry, I must say, was a standout. I’m a bit confused about Drew’s claim that the timber shelf was “the worst statement piece I have seen so far in the whole competition”. He went on to deem it virtually useless. Um, Drew… it houses plants. There are things in homes called design features, and they don’t need to be functional. The laundry is packed with so much storage already. It’s perfectly fine for a shelf to be there purely for decorative purposes.

The living room; now that was another story. They deserved the criticism here. Kate and Harry didn’t spatially plan well and the scale is completely off (you can see the space in the slideshow below).

The sofa and rug are way too small for this space. There wasn’t enough large-scale furniture pieces in the room, and the wall housing the TV looked barren. 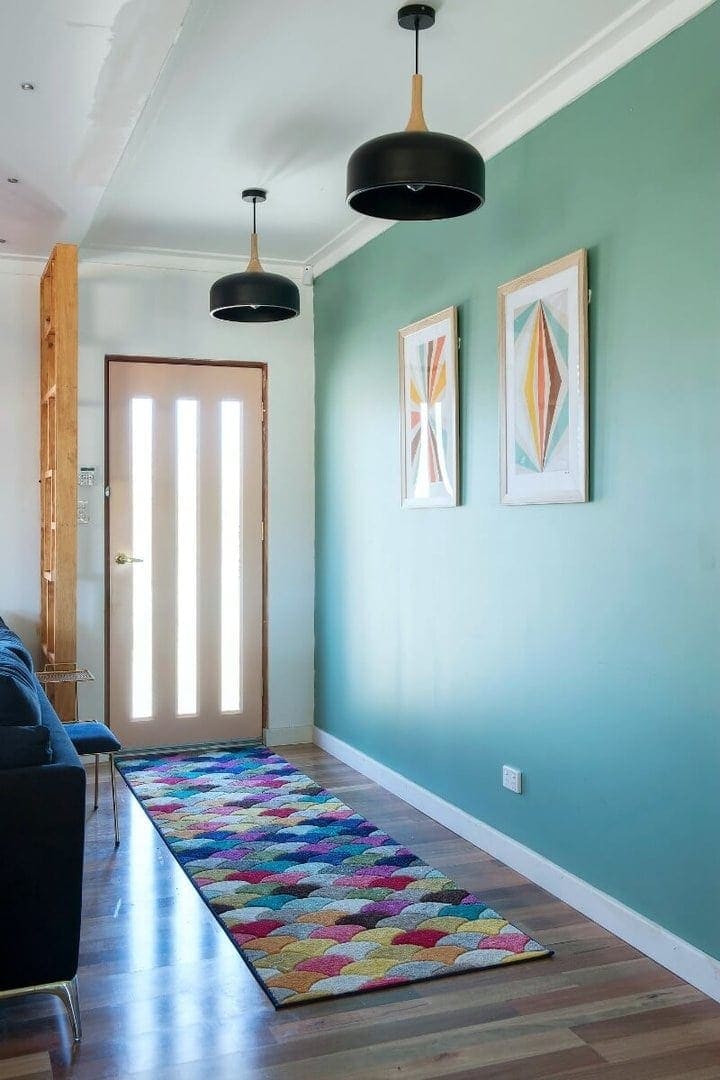 My biggest ‘what the?’ moment of the week comes courtesy of the twins coming out on the top of the leaderboard. The entryway I can give them some kudos for. I quite like the bold feature wall and the floor rug is a nice, whimsical and colourful addition to the space. The entryway sets the tone for the home quite wonderfully.

I don’t particularly like the wallpaper they used in the hallway (seen below). It doesn’t at all speak stylistically to the entryway. And it just goes to show how difficult some people find it to have design cohesion throughout their entire home. But looking at the hallway now, and comparing it to the hideousness that was going on in this zone prior… it is a large improvement. 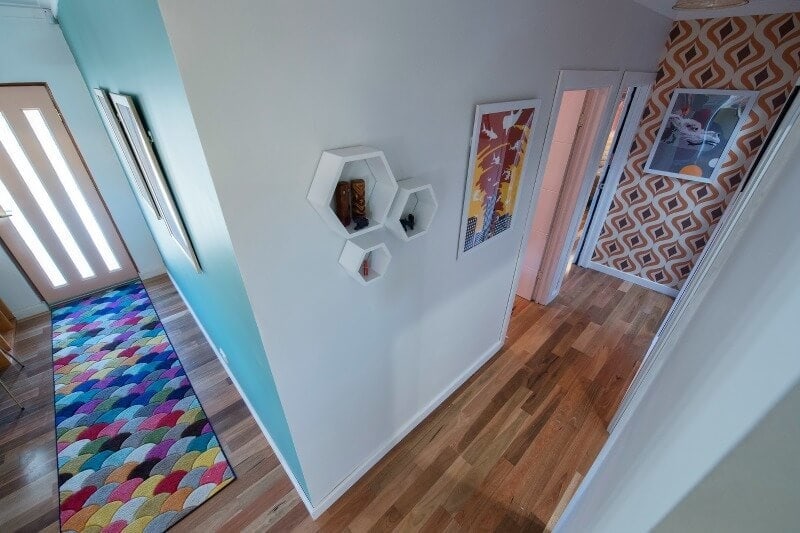 The twins wallpaper choice was just the beginning of the bad decision making. 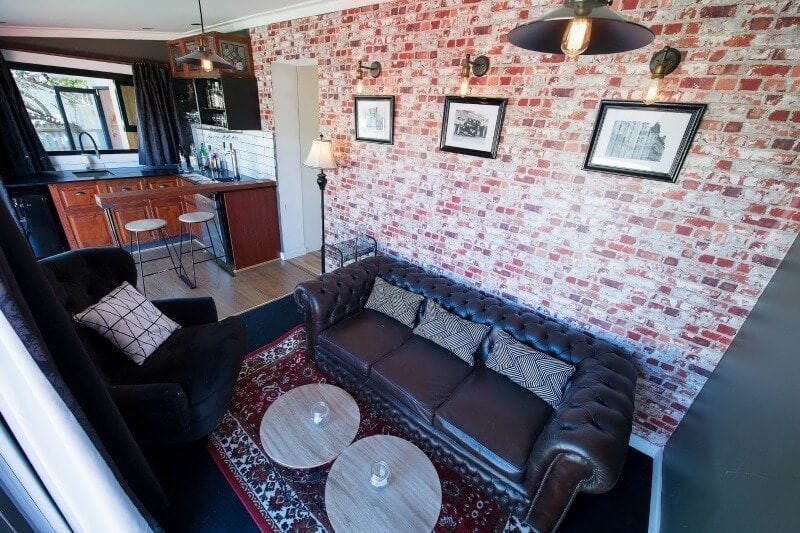 Seriously, many design sins are going on here in the twins’ speakeasy. 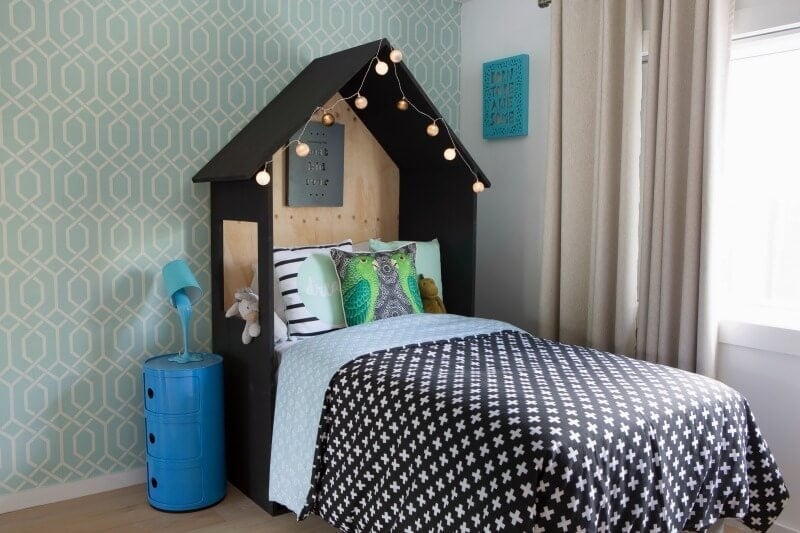 Loved the wallpaper in this kids space. And the bed is a stunner. 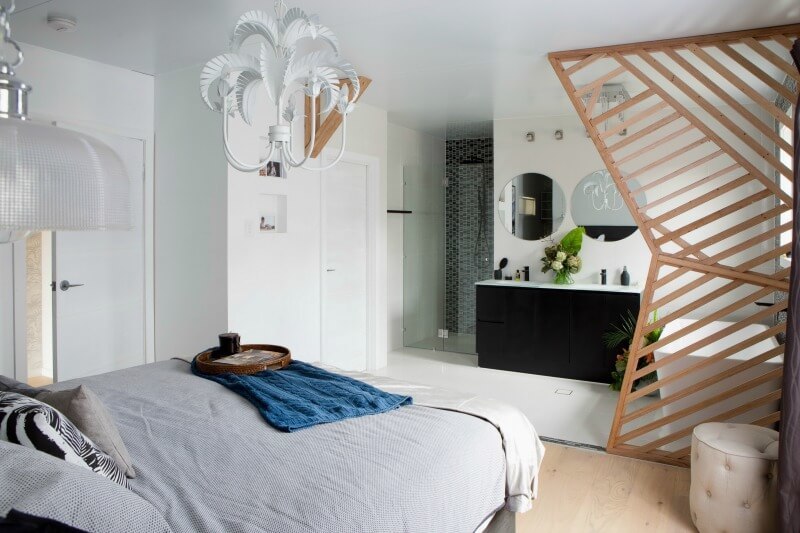 Like the idea of the screen, but it needed more thought and better execution. 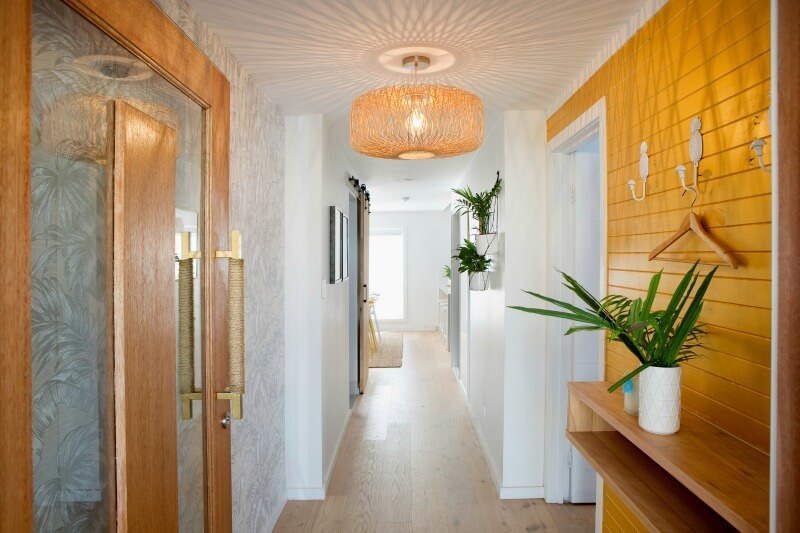 Gold paint was a bad colour choice, but this entryway is still warm and inviting. 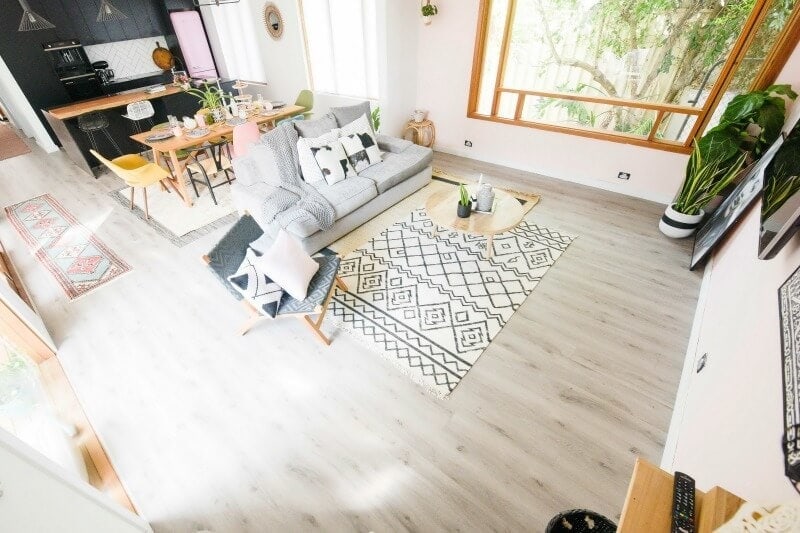 The living room needed a much larger sofa and floor rug to ground it. 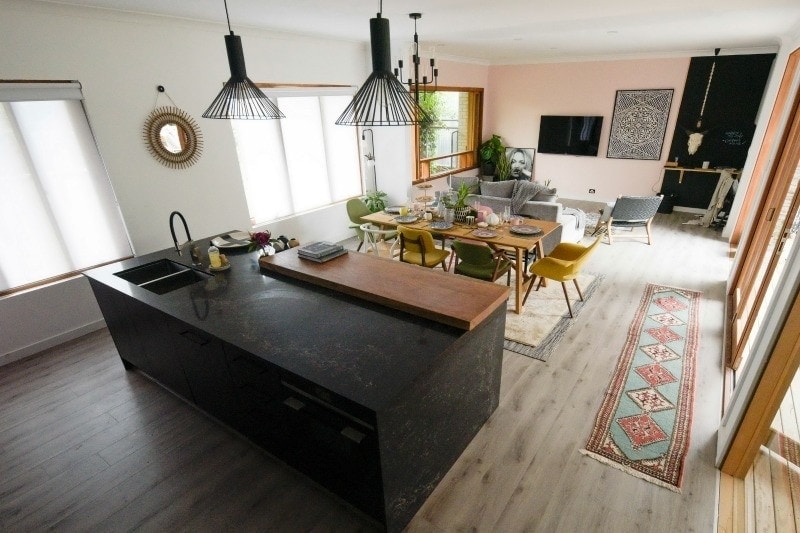 The TV wall is in dire need of some decorator rescuing. 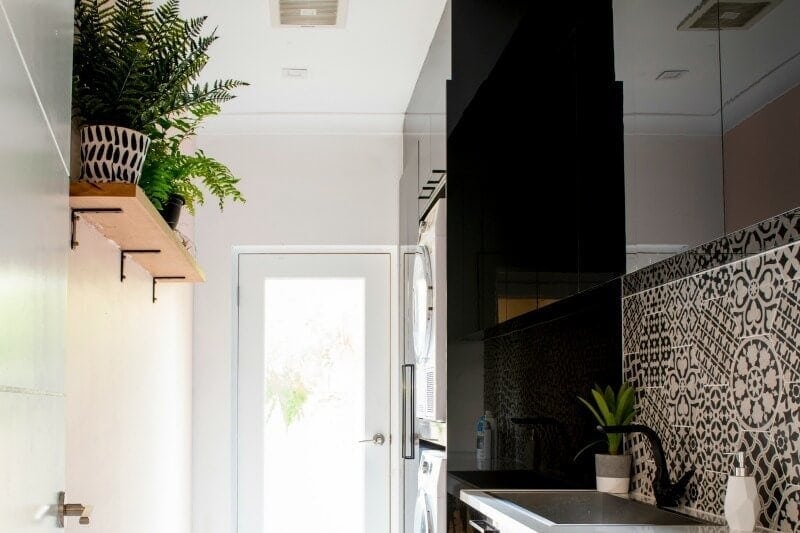 Loved the splashback tiles, loved the shelf with the plants on it. 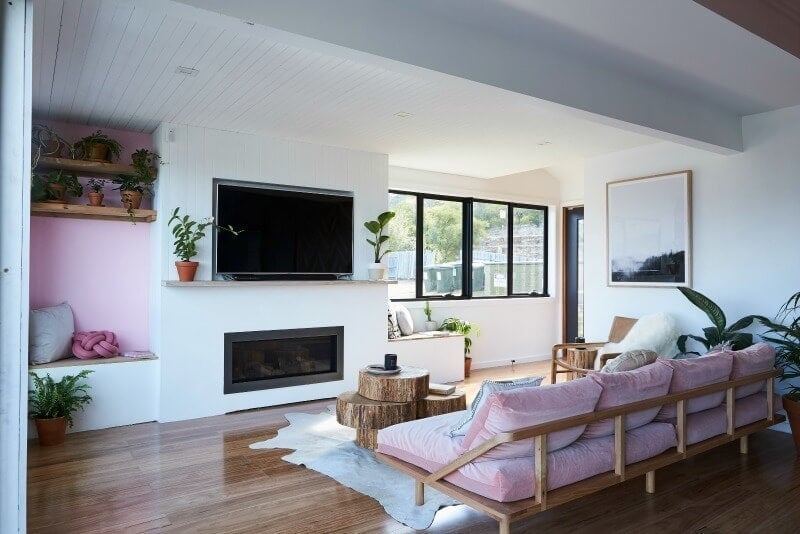 A major improvement in this space – especially with the coffee table.

Now, we need to Talk about the Speakeasy

The judges were amazed with the twins’ speakeasy room, which I’m really baffled by. If you asked me to pick out the room that looked the most like a ‘before’ shot – in need of a dire makeover – I would have chosen the speakeasy.

The major issue I have with the speakeasy is that it doesn’t tie in to any other rooms in the home. Its dark and moody man-cave vibe is worlds apart from the retro colourful vibe in the other pockets of the home. It makes no sense to me and I’m genuinely confused by the praise.

Wendy said “I cannot believe the chasm between these boys and the other teams”. Drew was equally impressed and thought that the boys were so far ahead than the other teams.

Not only that, but the furniture is way too large for such a small space. Am I wrong?

What did you Think?

I thought Aaron and Daniella’s zones were actually pretty awesome. I mean, the screen in the bedroom wasn’t great, but overall their zones looked good.

Drop a comment below and share your thoughts. Are you pleased that Fiona and Nicole are gone?