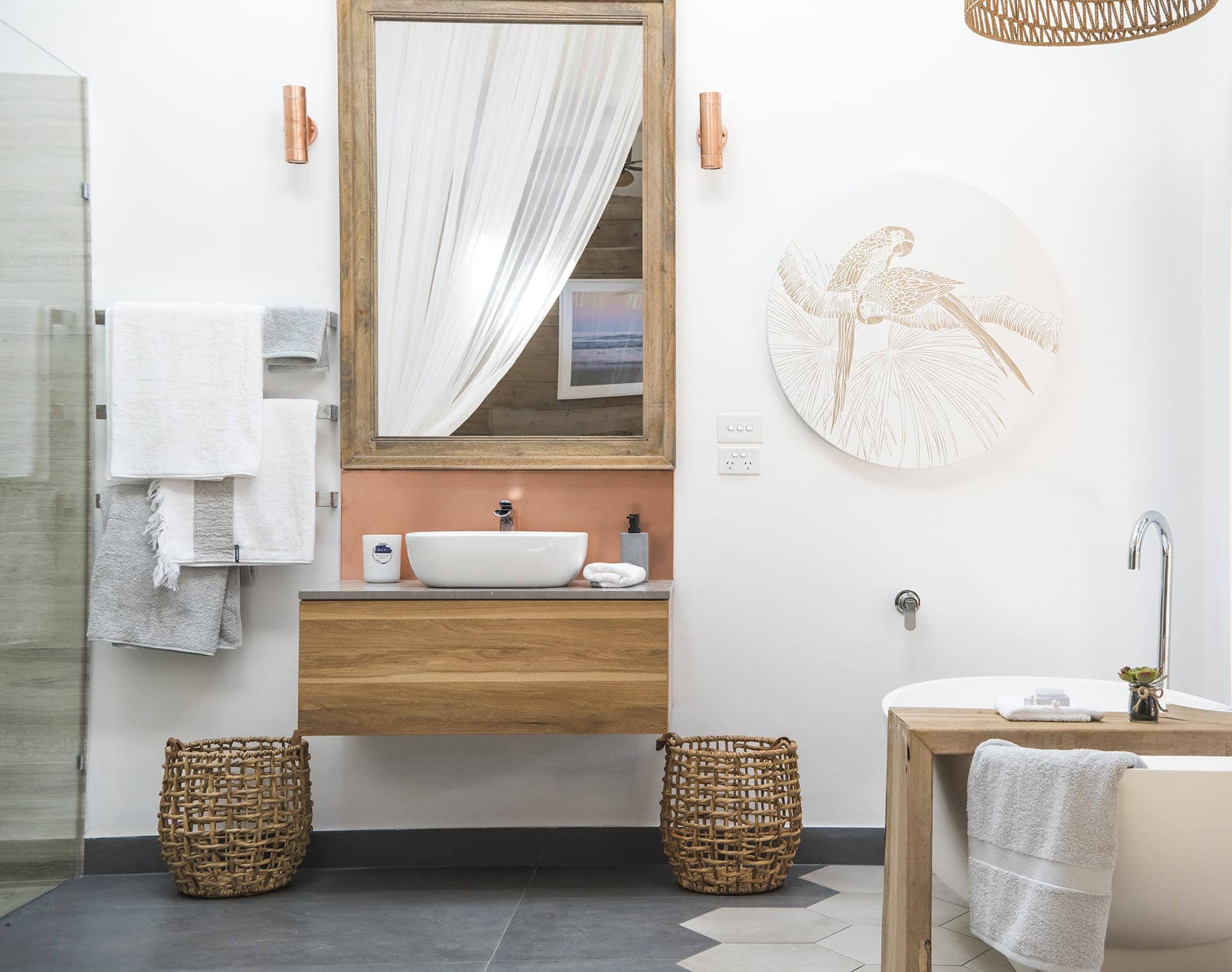 Inside the House Rules 2018 Leigh and Kristie Reveal

This week’s House Rules reveal reminded me of that time I tried to make coleslaw. No, really… hear me out!

How hard could homemade coleslaw be, I thought. I’ve eaten coleslaw before! Making it myself can’t be that big a stretch. Much like the teams in this competition, I had no idea what I was doing.

I started by boiling the cabbage. I’ve no idea why I did this, but it seemed like a smart idea. Then, I chopped up the wet, soggy cabbage and threw it into a bowl. Base complete!

On top of that, I added shredded celery, carrot and mayonnaise – which seemed logical. Then, things got weird. Something possessed me to add in corn kernels. I must have been three wines in at the time. But then I added cucumber and onion, for flavour. And to top it all off, I threw in a few boiled eggs. Voila!

The next day, when I dished out my coleslaw for lunch, I almost heaved on my first bite. And the whole lot went in the bin.

The lesson: House Rules rooms, like my coleslaw, benefit from the ‘less is more’ approach. Because good LORD did they overstuff the rooms this week with a whole lotta crap that wasn’t required.

Let’s examine the House Rules Leigh and Kristie reveal in more depth below! 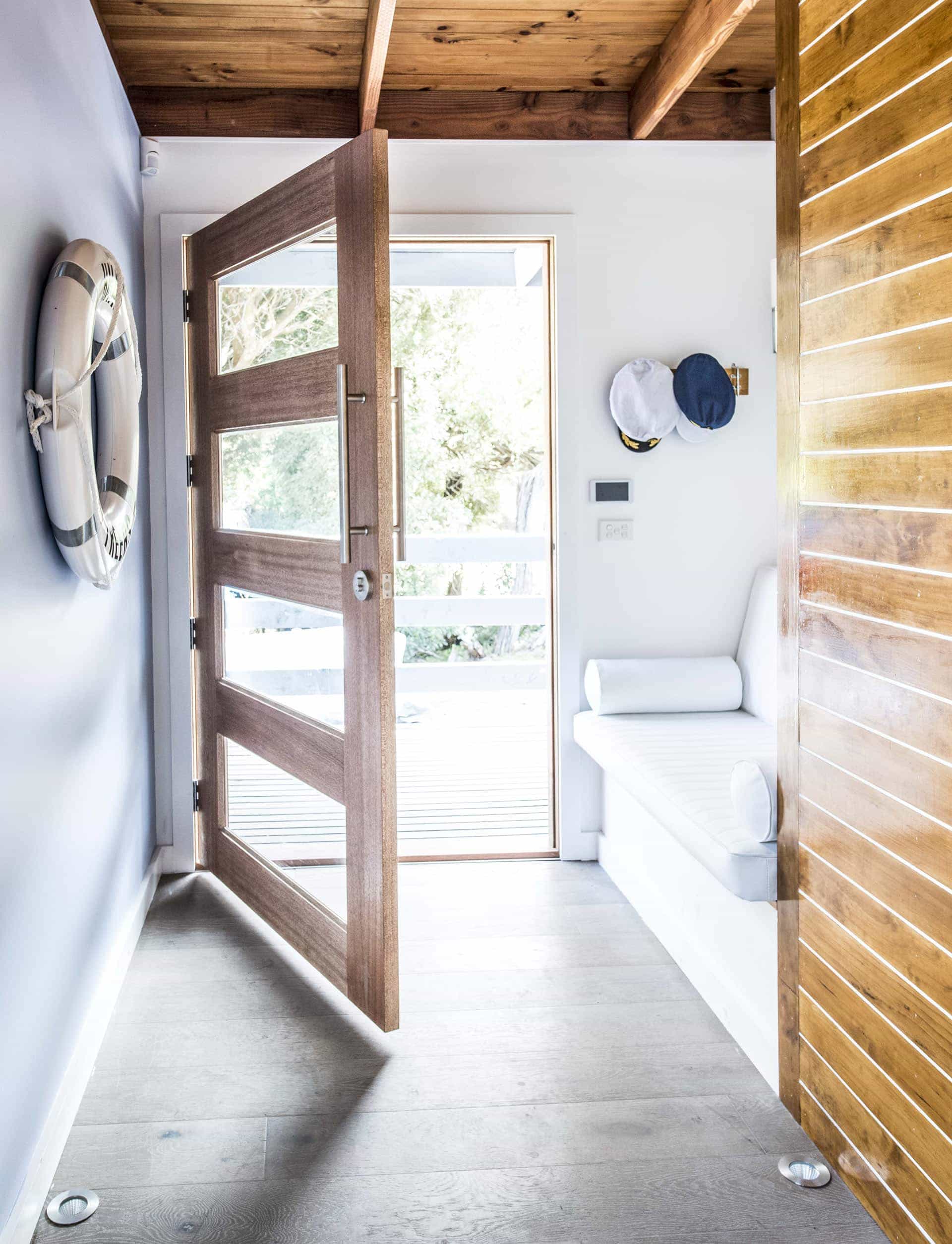 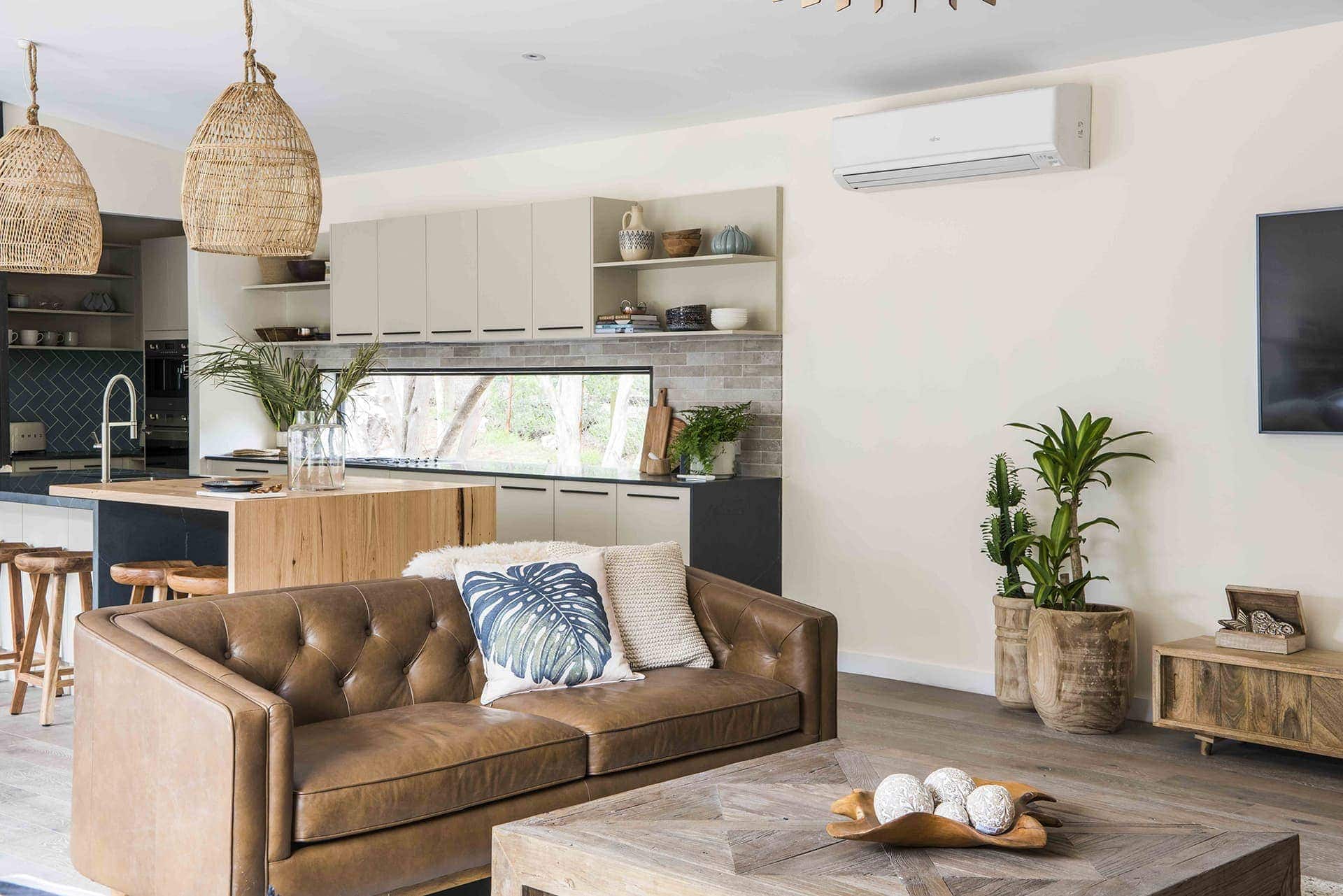 Josh and Brandon did OK this Week

Call a doctor. I’ve just completed the world’s biggest eye-roll over the sailor’s hats in the entryway and now they’re stuck.

Can the teams please stop being so literal with the House Rules? Not only are the hats and buoy kinda tacky, they’re not even ‘California cool’! I don’t expect the teams to have a flair for design, but I would appreciate them knowing the difference between California bungalow and nautical schemes.

The entryway is wonderfully light and bright though, which I fully appreciate. I like the colour palette, I like the door, and I love the bench seat they installed. So I can’t be too hard on them for the tacky finishing touches. At least we can take them away, right?

In the living room things got a little bit muddled up. The space was OK but it didn’t read ‘California cool’ to me either. The leather sofa was the main issue, as was the vibrant artwork. Both were completely out of keeping with the rest of the room stylistically.

I also thought the mounted TV was an odd choice on that wall. They should have swapped the TV and artwork around and oriented a large 5-seater sofa with chaise to look toward the fireplace and TV – on the same wall. As it stands, you’re miles away from the TV screen. 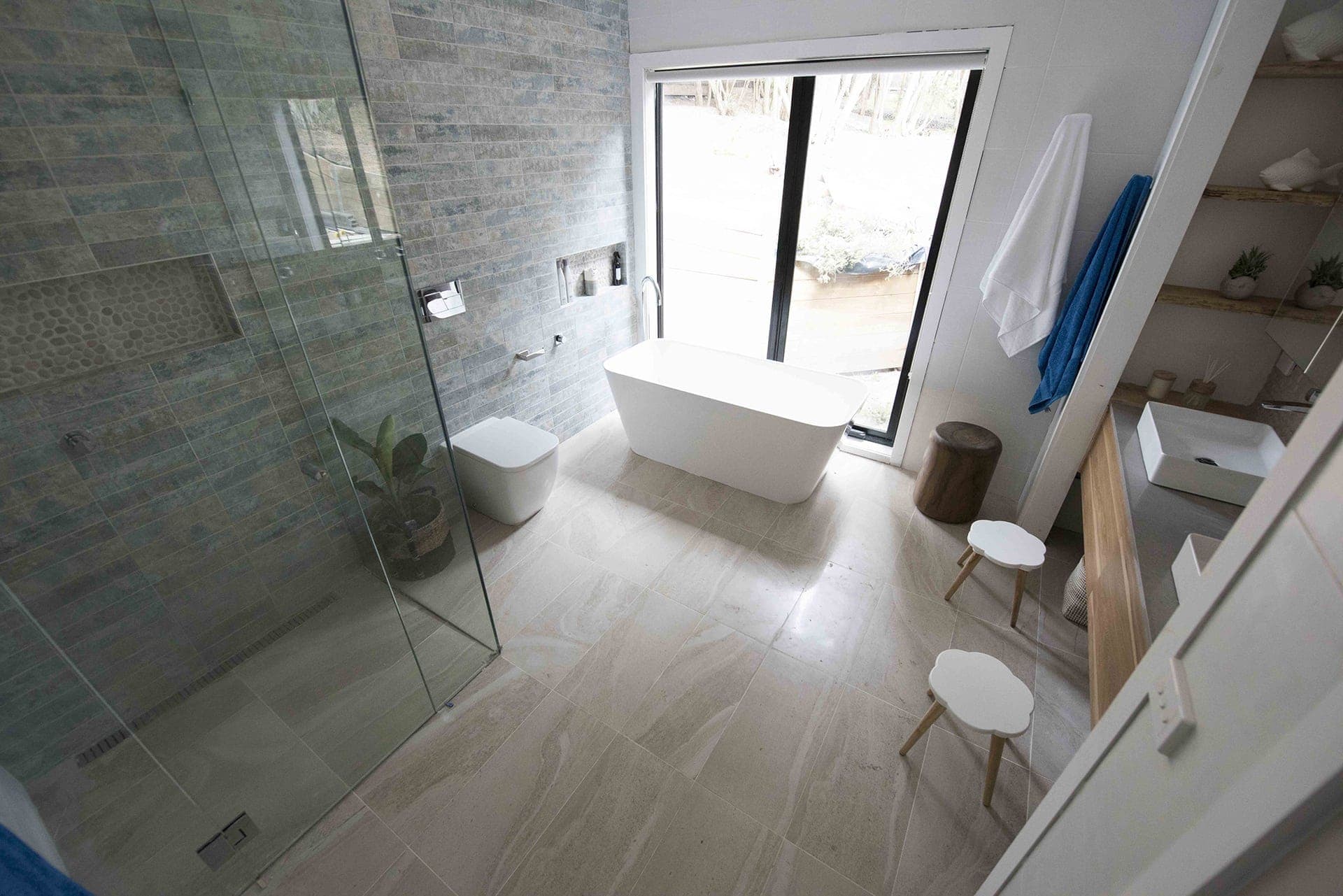 Kim and Michelle’s Bathroom was A Mixed Bag

Kim and Michelle had a large space to work with here, and there was a lot of potential to make it amazing. I don’t think they quite got there though.

The floor tiles are a nice choice; an organic option that gave the room some grit. But then the wall tiles really let the space down. I mean, take a look at the photo above. That roller blind is all the way up and the space still feels dark and gloomy.

The wall needed some lighter tiles to balance out the rustic matte nature of the floor. It all feels a bit heavy, dark and cold. There were some white tiles featured on one of the smaller walls. I would have taken that all the way across the back wall where the toilet was. Then it would have been a soothing bathroom like this one.

I can’t say I’m a fan of the styling in this space either. And the vanity felt crammed in, like me trying to get into my jeans after this long weekend of carbohydrates and wine. 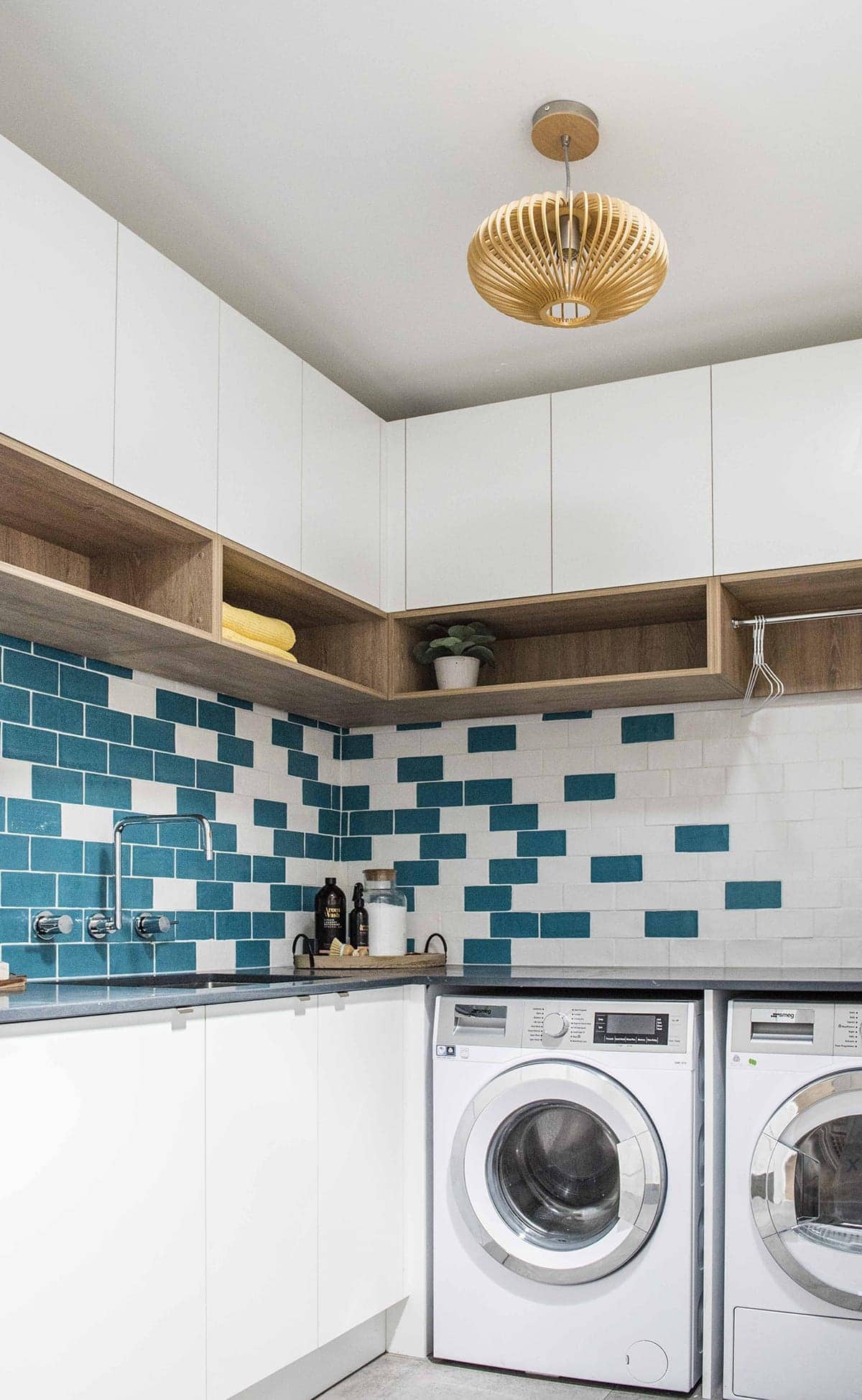 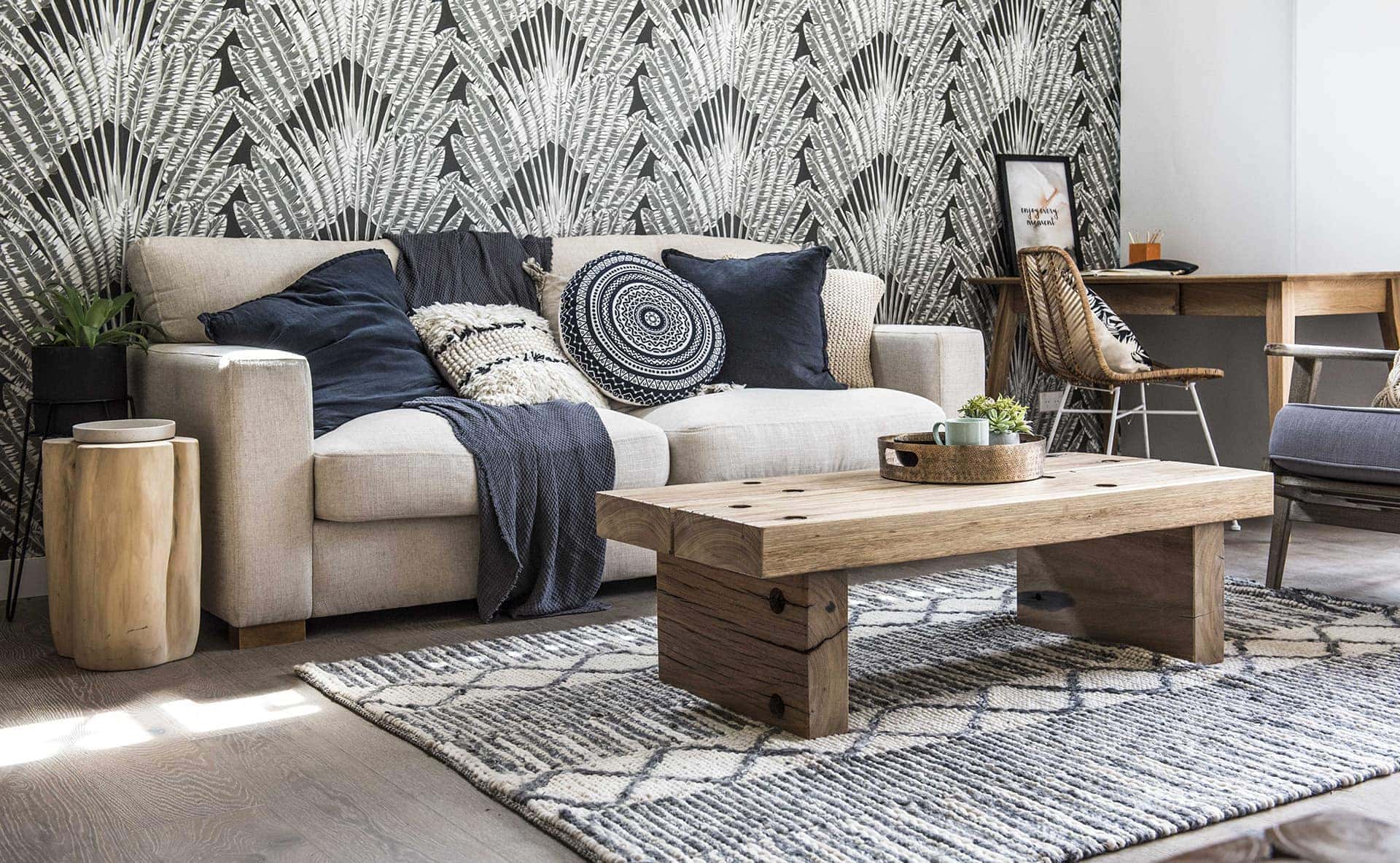 Toadfish and Mandy, you deserved more!

Toadfish and Mandy did good this week. I’m surprised they fell so far down the ladder in terms of points.

The laundry, as Wendy pointed out, was super functional. It ticked a lot of boxes in terms of simple design. I know, simple design should not earn teams points. But as I said last week, this is House Rules – we set the bar pretty low, don’t we?

The space had clean lines, lots of storage, and some lovely timber moments. Even the styling was OK. What I will agree with LLB on is those wall tiles. They’re all sorts of diabolical. Pass me the sledgehammer because I need to take to them immediately. It was a cute idea guys, but it didn’t work in reality.

Now, onto the den. Can we talk about the den? Because I think the den is the best room of the week and I’m really shocked that Toadfish and Mandy didn’t score better here.

It has a lots of California surf shack vibes to it. The colour palette is divine. The textures are bang-on. The patterns are hot-diggity-dog! This space actually looks like a proper, well-designer, ‘after’ photo. Can we pause for a moment on that? An actual, well-designed room. Seriously, T&M did really well here and I think they should have come in second place. 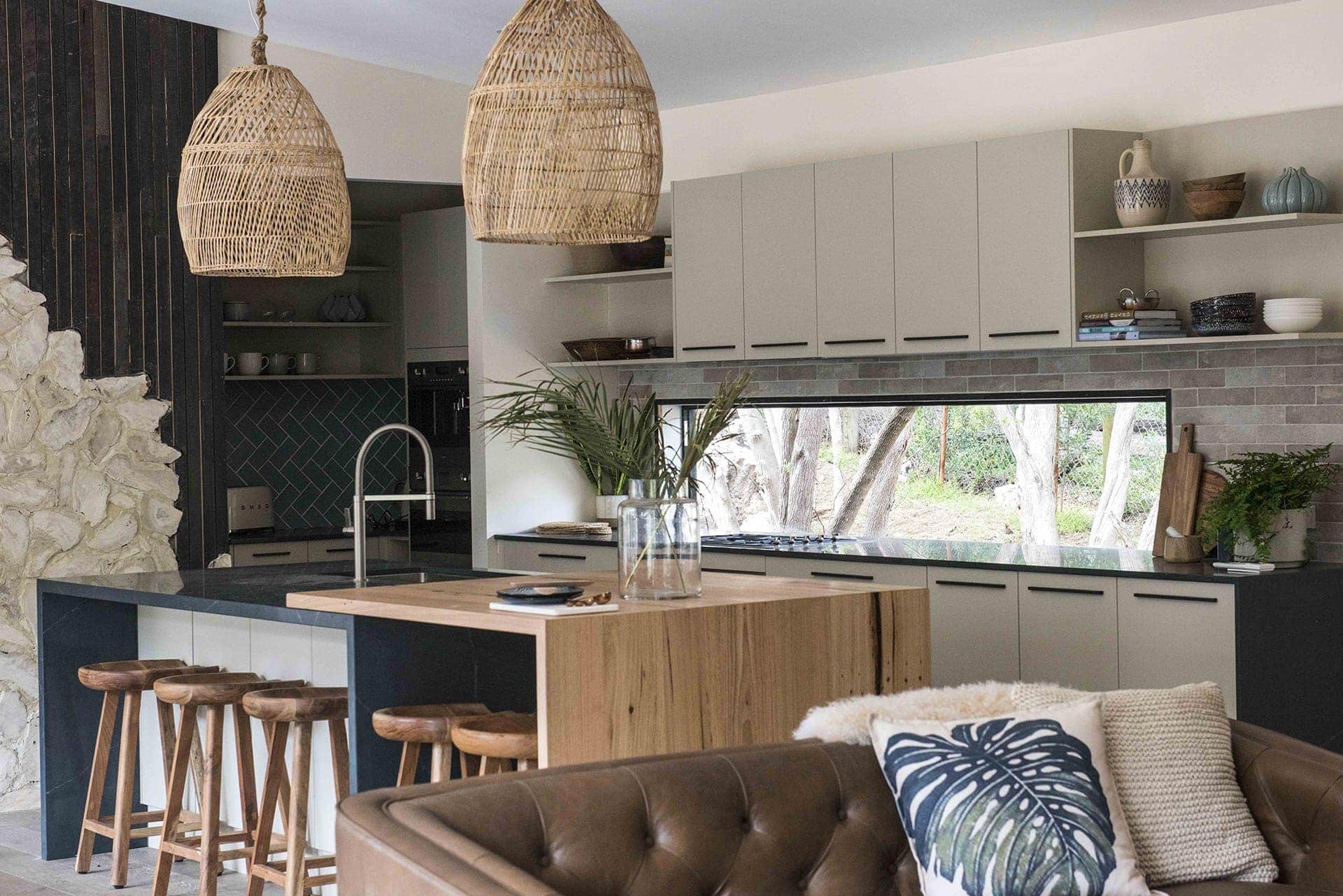 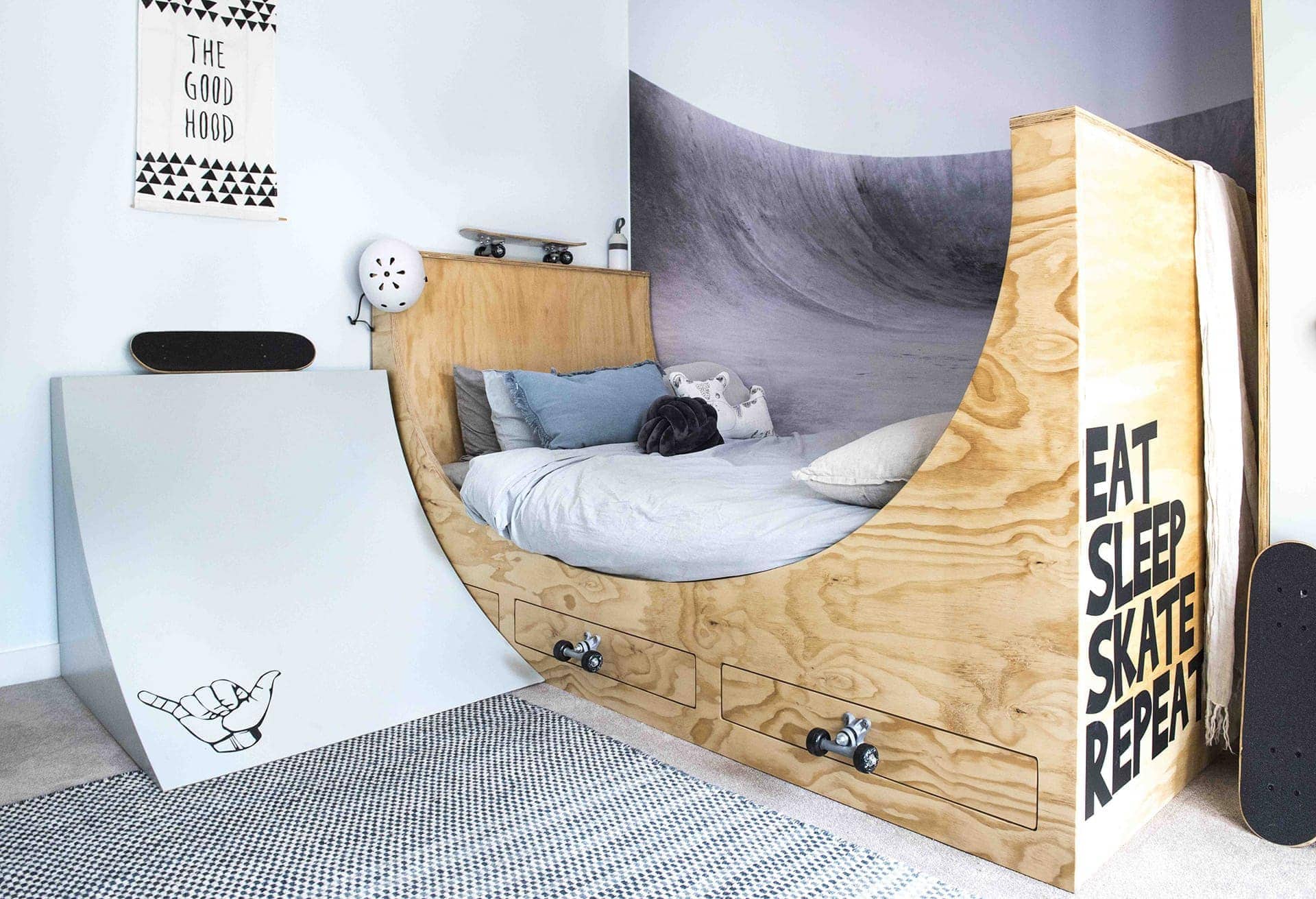 Jess and Jared took on the Kitchen and Kobe’s Room

There was more going on in the kitchen than in my last therapy session! How many different design elements can you pack into one space? As it turns out, about 45!

We have a weird-as-hell stone wall that looks like some sort of horror movie monster working its way across the room to eat you alive (The Blob?). It’s crawling over a poorly executed dark timber feature wall. Beyond that, we have two different tile colours, sizes and patterns going on. And then we also have a few different benchtop materials to contend with as well.

We have cabinetry, open shelving, a window, and two giant pendants – all competing for your attention. I want to call in a de-clutter expert to sort this room out, because it’s going to impede Leigh and Kristie from living their best lives. Or whatever it is that experts claim clutter does to your soul.

Thankfully things got much better in Kobe’s bedroom. I actually really like it. Sure it’s a little cliched, but it’s undoubtably cool. They went the extra mile and served up what I imagine Kobe will lose his mind over.

Last week I complained about people who don’t do wow moments in kids spaces. But you can’t say that about Jess and Jared this week. I think they nailed this space. 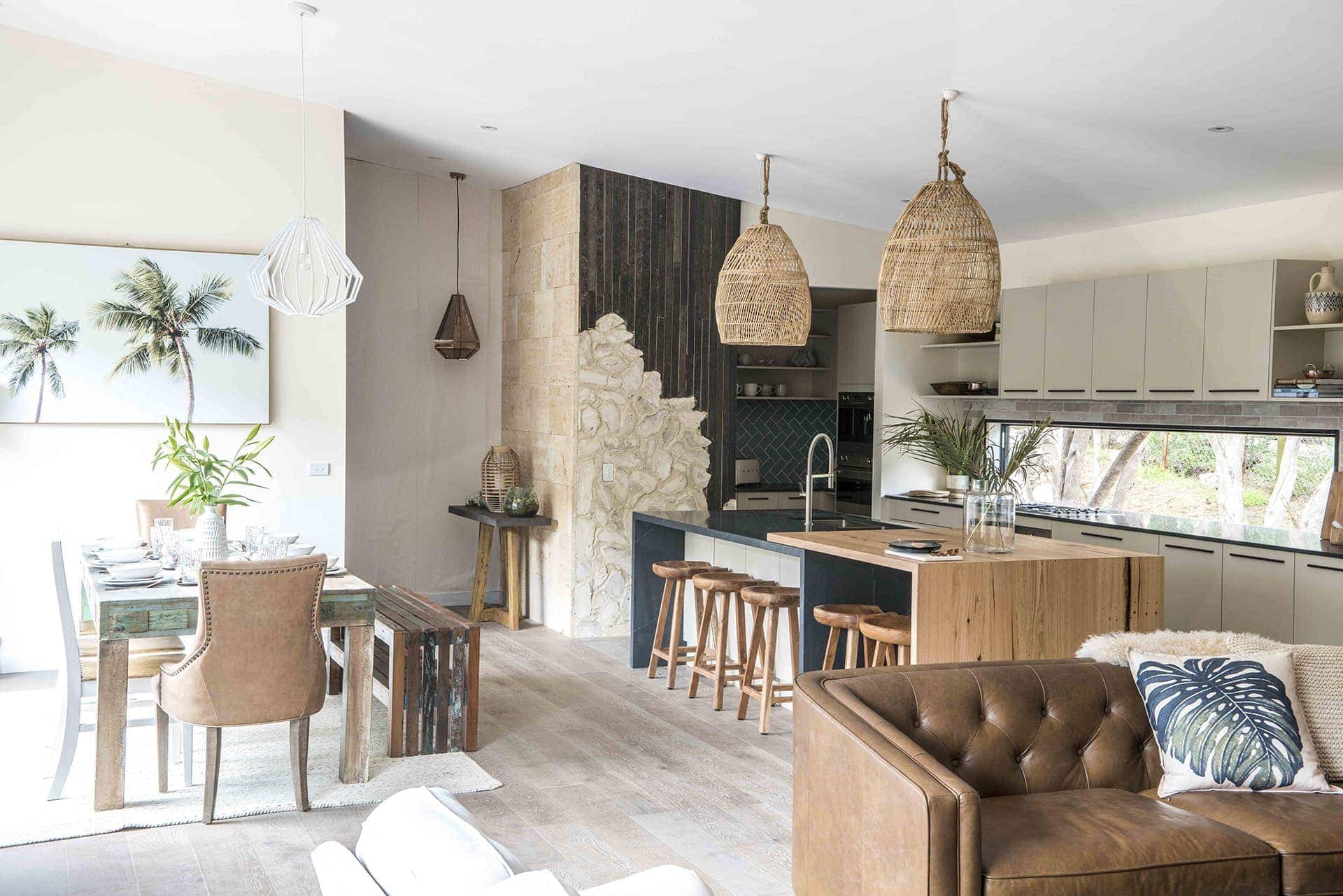 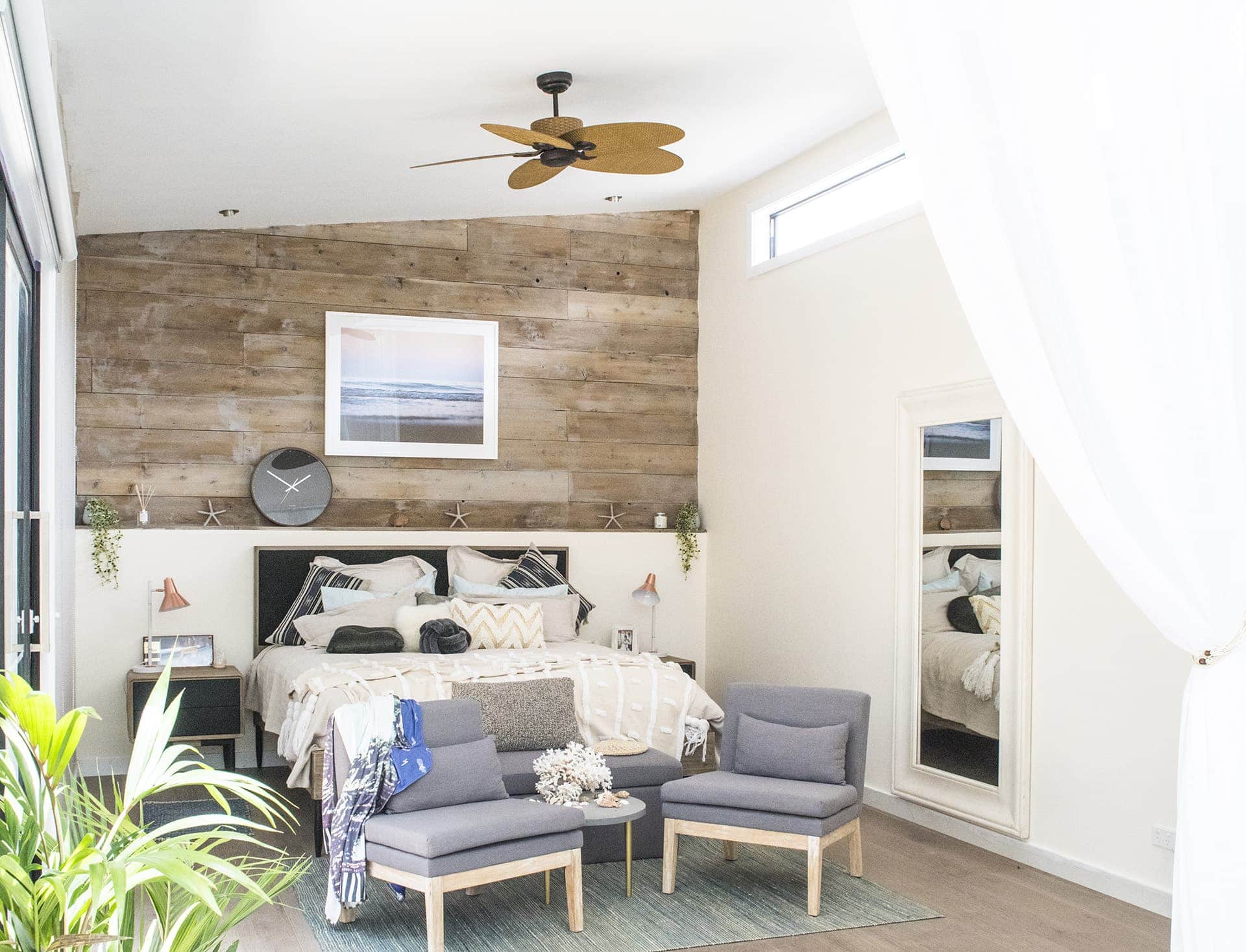 I’m shocked that Chiara and David tied with Toadfish and Mandy this week. Both of their spaces were very thrown-together and need a tonne of editing to make them feel calm and welcoming.

Let’s start in the salvage yard dining room. The pendant isn’t centred over the dining table, can we start there? Everything about the table and chairs feels old and ratty. I dislike the overall vibe. There are some phenomenal coastal-style dining tables and chairs on the market. I don’t know why they chose this one.

The rug was also too small for the table. Here’s how to nail rugs under dining tables, and nail them right!

In the master bedroom, it was an explosion of a thousand thoughts. Like me after too many red bulls. There was honestly SO much crammed into this space that my eye doesn’t know where to go first.

Furniture-wise, too much was pushed too closely together. The sitting zone at the end of the bed, for example, is so crowded. It’s either a bench seat or armchairs, not both!

Personally I’d take away the armchairs. They interfere with the eye-line. If they were gone the bed would be much more of a moment in the room.

There seems to be a bit of an obsession with ledges above beds this season, and I don’t know why. The ledge is so poorly styled. I mean, come on: there are STARFISH on display. I can’t even.

The mirror is also oddly low on that wall. If you stripped this room right back you could make it look really amazing. Because the foundation is there. 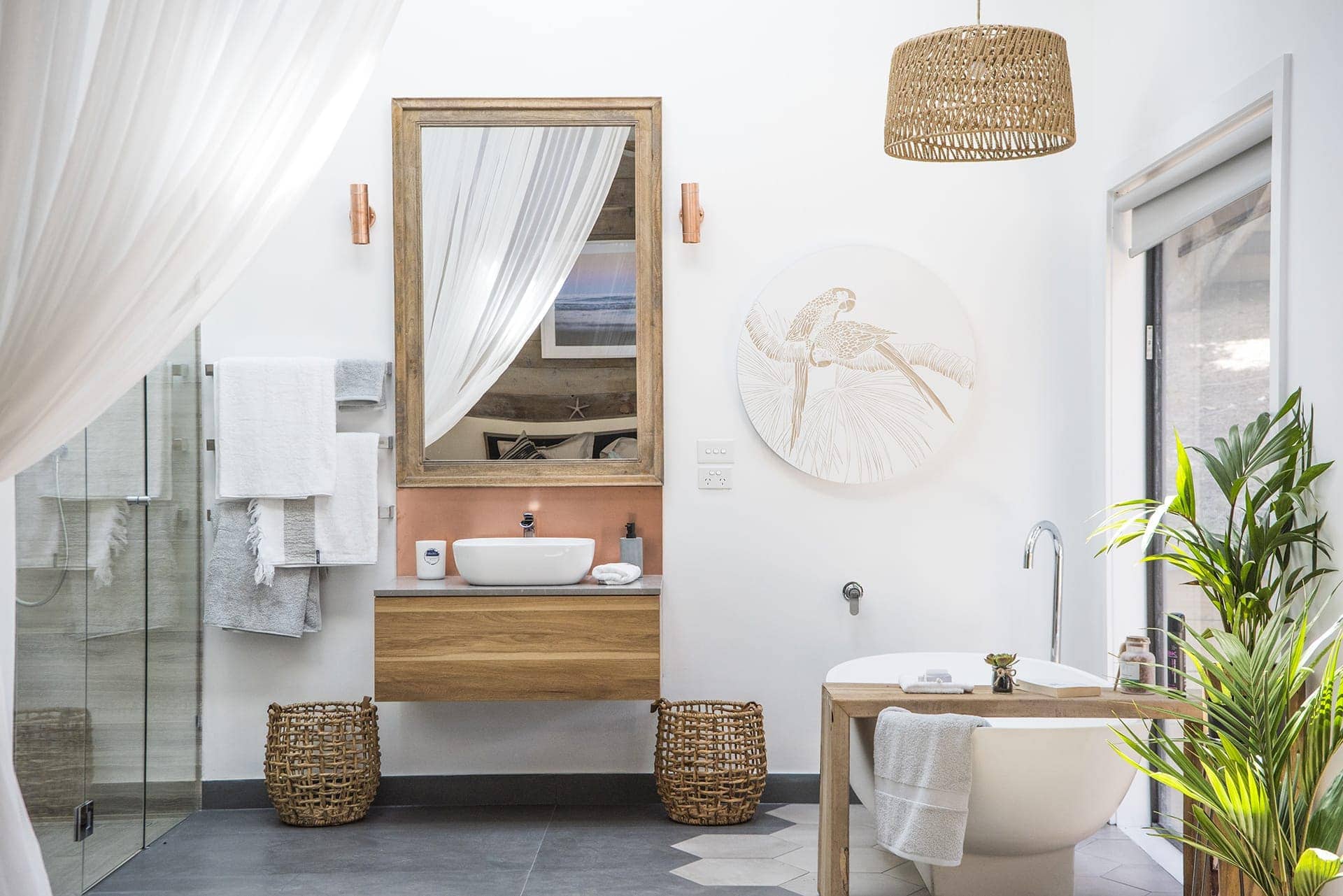 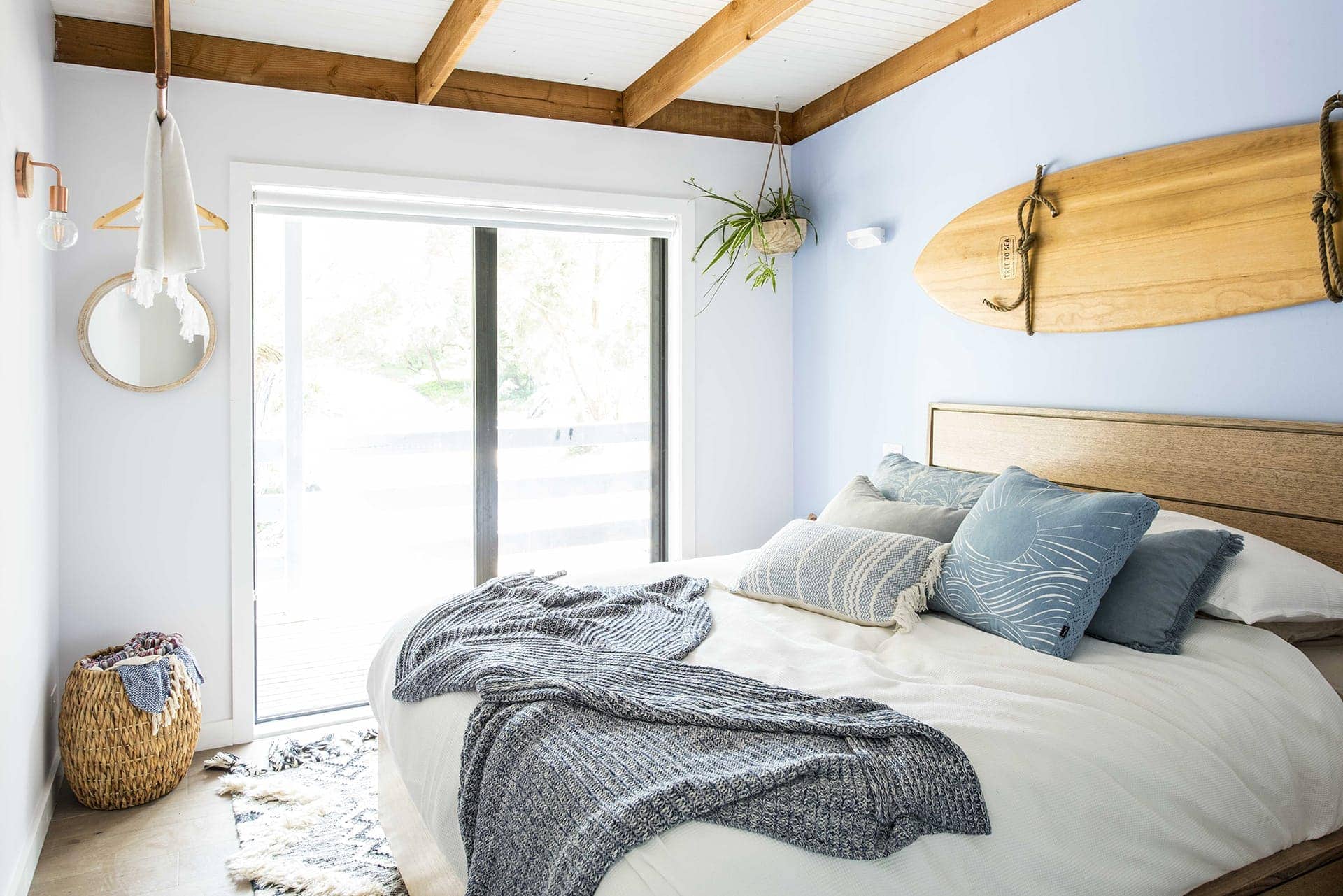 Mel and Dave were Almost there this Week

Mel and Dave, you little rippers! You almost had me this week. Which in a series like this, is saying a lot.

The ensuite and crash pad were so close to amazing. The colour palette in both was divine, for the most part, and the spacial planning was pretty good too.

In the ensuite, I just wish they had of aborted the copper elements. There’s just no place for them in the design and they look really out of place. If they had of been removed it would have been a totally serene, easy-breezy space. Light, bright, coastal and clean. But the metallic takes me somewhere else. And I don’t want to go to that destination.

In the crash pad bedroom, they were almost there again. It was so close to brilliant. The blue wall colour was a nice choice. The bed was good. The flooring was lush. And the bedside was sufficient.

But why only one bedside? And why was a leather armchair stuffed bedside the bed? And why is there a wooden surfboard on the wall? There are so many questions I won’t get answers to. Mel and Dave were so close to stunning in this room but a few decisions really let them down. 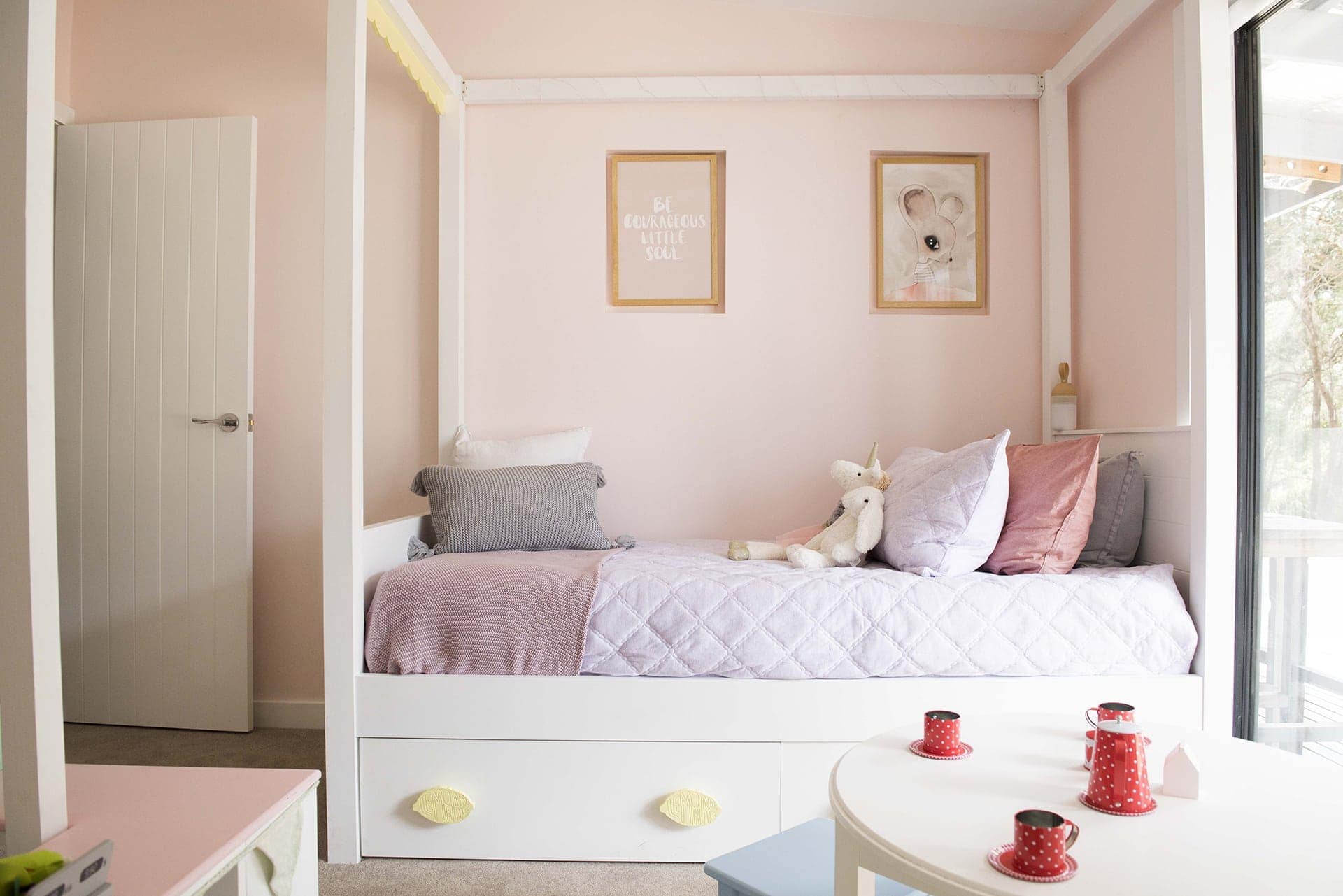 What did you think of the House Rules 2018 Leigh and Kristie Reveal?

I’d love to know what you thought this week! Which room was your absolute fave and which had you reaching for the bucket? Don’t leave me hanging here dishing all the dirt myself – drop me a comment below and share your thoughts!