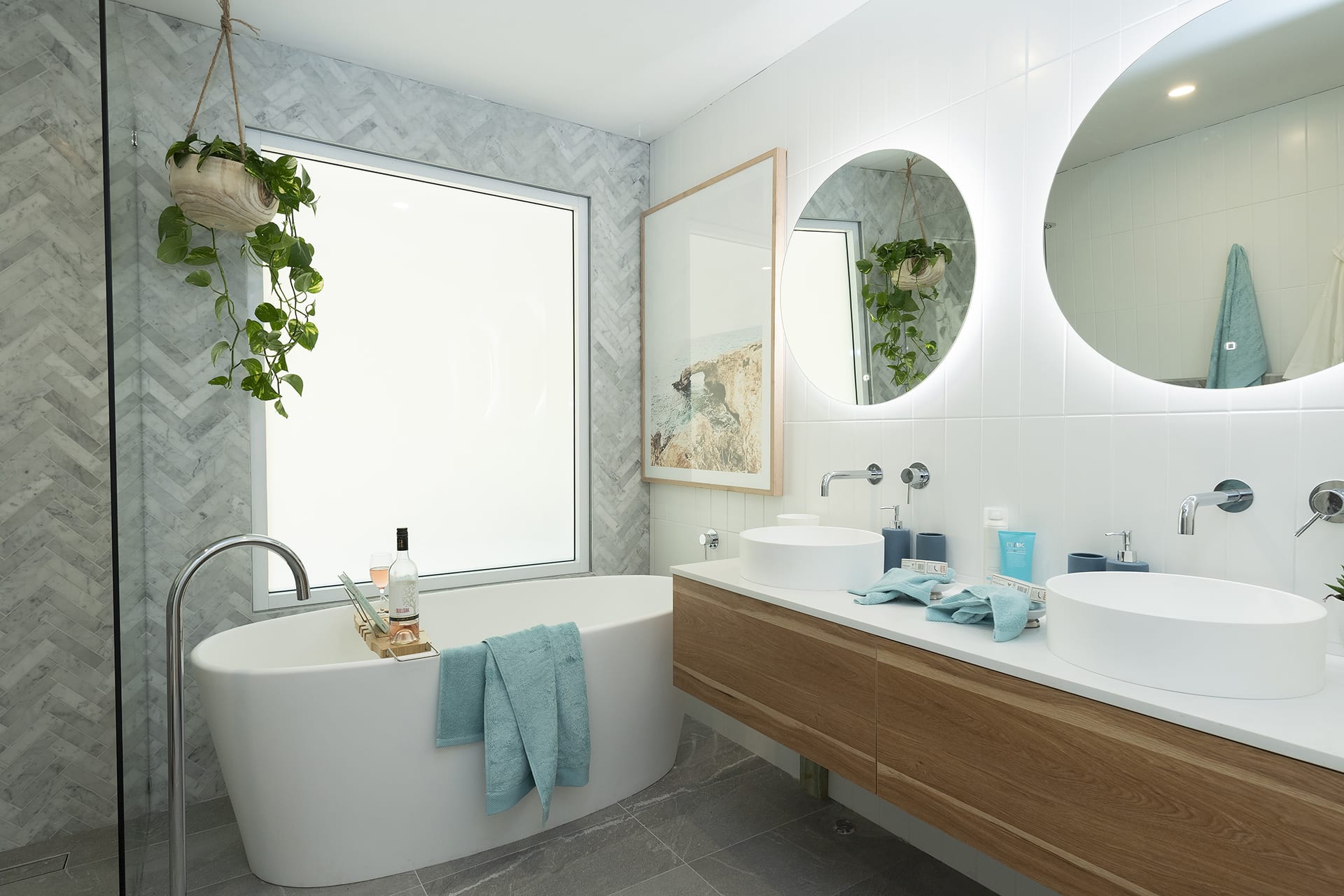 OK gang, we’re here to talk about the House Rules 2019 Eliza and Mikaela whole home reveal. But outside of that there’s a bigger issue to discuss: House Rules has upped its game this year. It’s good. Actually, truthfully, quite bloody good!

I don’t know what’s happened behind the scenes between last year’s series and this one. But I know this: the teams are doing better. The reveals are getting better. Either they have more design help in terms of up-front conceptualising of the spaces before they start work. Or, the producers cast teams who had a bit of style about them to begin with. Or perhaps it’s a combo of both.

I’ve got to admit, I’m loving where this show is headed as a result. Sadly for me, it means my witty take-down articles each week are doomed to be less humorous. But if we get less humour and more design inspiration, it’s a compromise I’m willing to roll with.

Let’s take a closer look of which rooms worked and which failed in the House Rules 2019 Eliza and Mikaela reveal.

Let’s Start with the Successful Spaces… 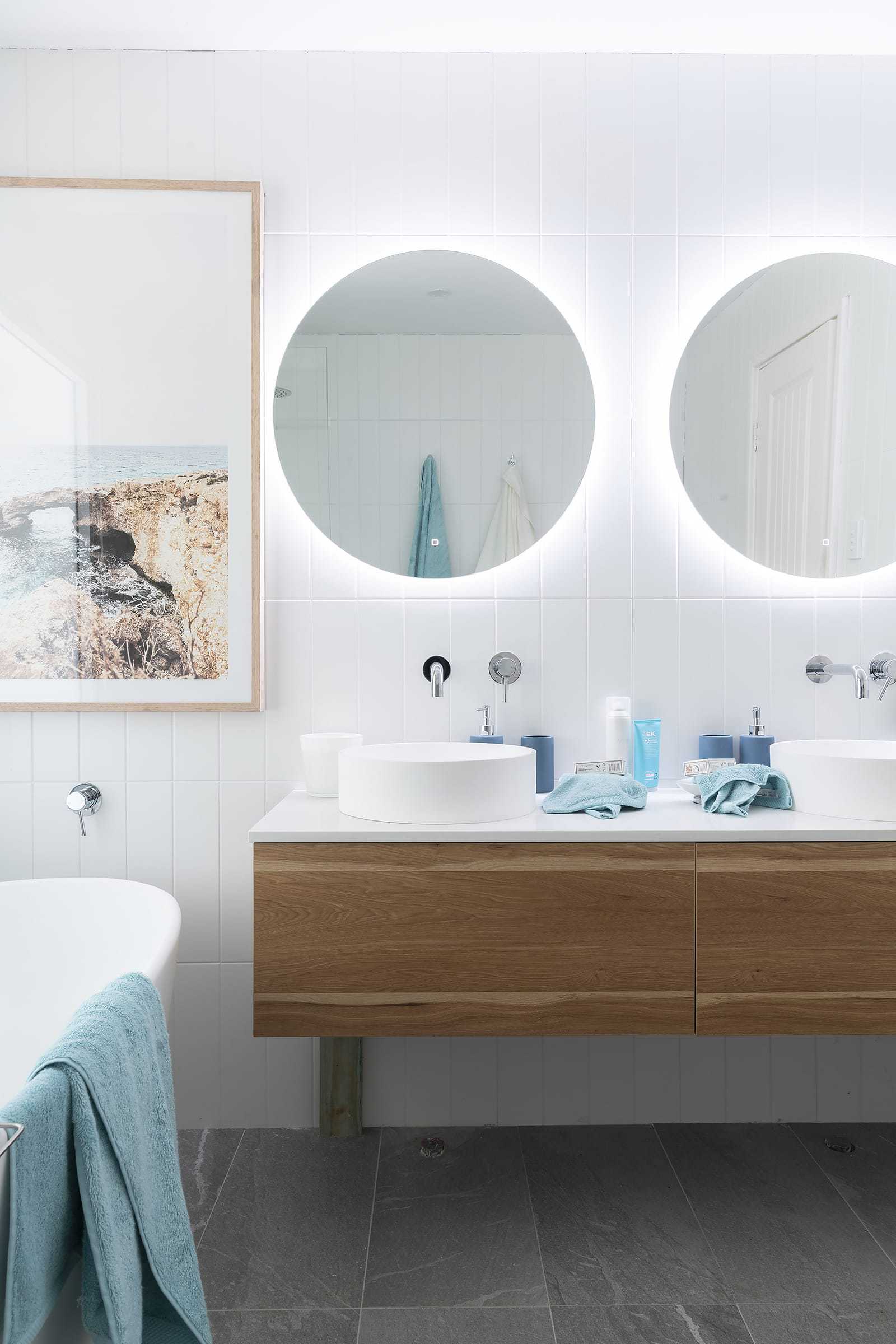 Bathroom and Ensuite were Clear Winners

Let’s be honest: the bathrooms in this home were freakin’ delicious. I could eat both up with a spoon. I mean, in the one above the styling is not on-point. But they’ve clearly been asked to cram in these odd Nak products each week and so I blame the producers for the mess on top of the vanity.

PS I have no idea what Nak is but it sounds like the name given to an intimate area you go to get waxed. “I’m just here to get my Nak sorted out thanks”.

Outside of the bad styling above, the colour palette in both the bathroom and ensuite is gorgeous. So soothing and perfect for a coastal home, don’t you think? The round backlit mirrors above are beautiful, the marble herringbone tiles are the stuff dreams are made of, and the floating timber vanity is perfect for bringing a sense of warmth to the space.

There’s nothing I dislike about the room above apart from the size of the artwork, which is just too big to be crammed into the corner bedside the mirrors. PS if you need ideas on where to get some killer coastal artworks from, try here.

In the bathroom below, I’m smitten with the tile choices. Everything just works. I’m usually one to advise teams steer clear of gold tapware on shows like this because so often they get it wrong. But it provides a really nice sense of balance against the blue glazed wall tiles.

Further down you’ll see the laundry. I don’t think it was as successful as the bathrooms but it’s still nice. There’s a bit of a blue overload going on with not enough contrast and balance. I’d be inclined to keep the wall colour but tone down the colour of the tiles. A soft grey or white would have worked better here, 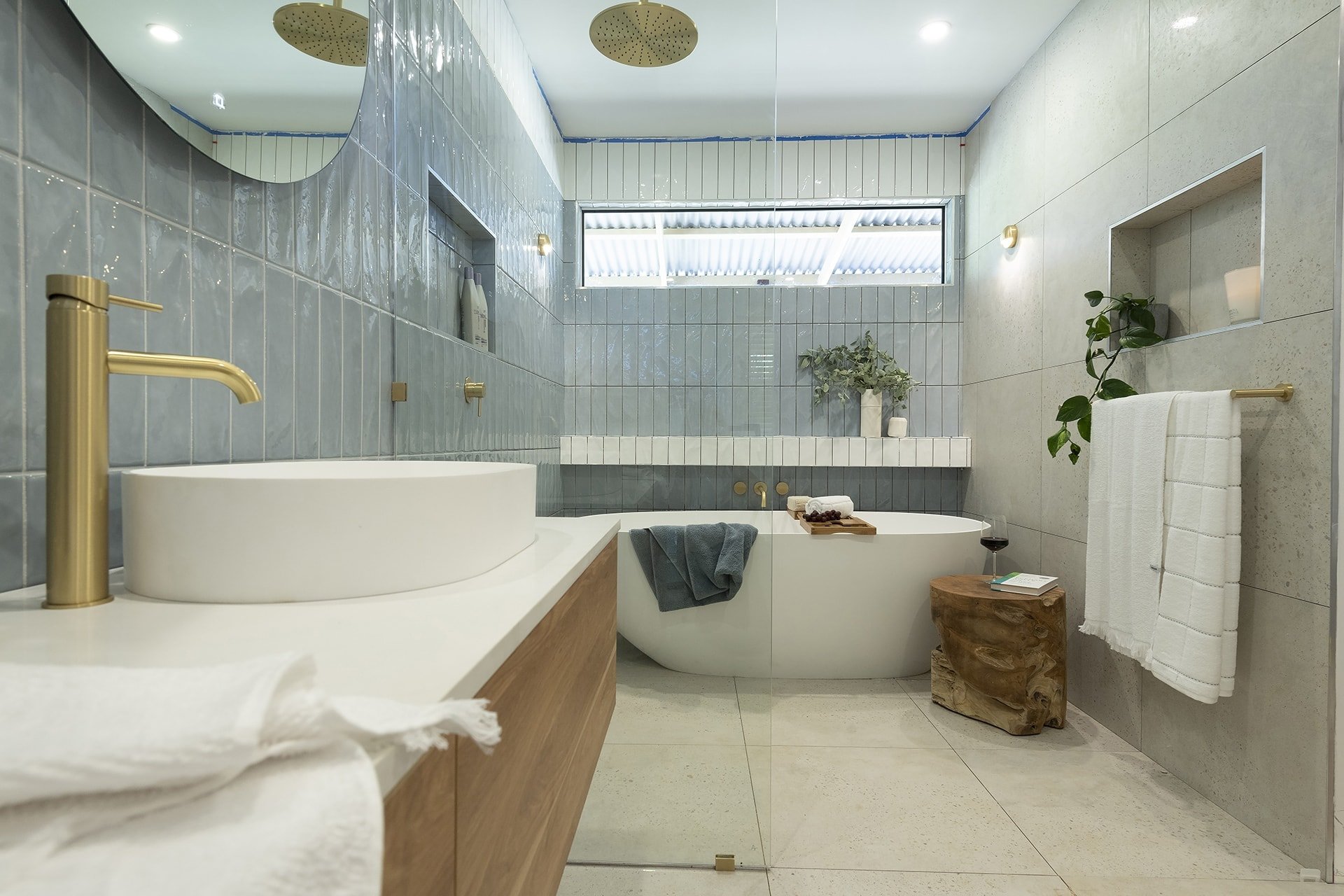 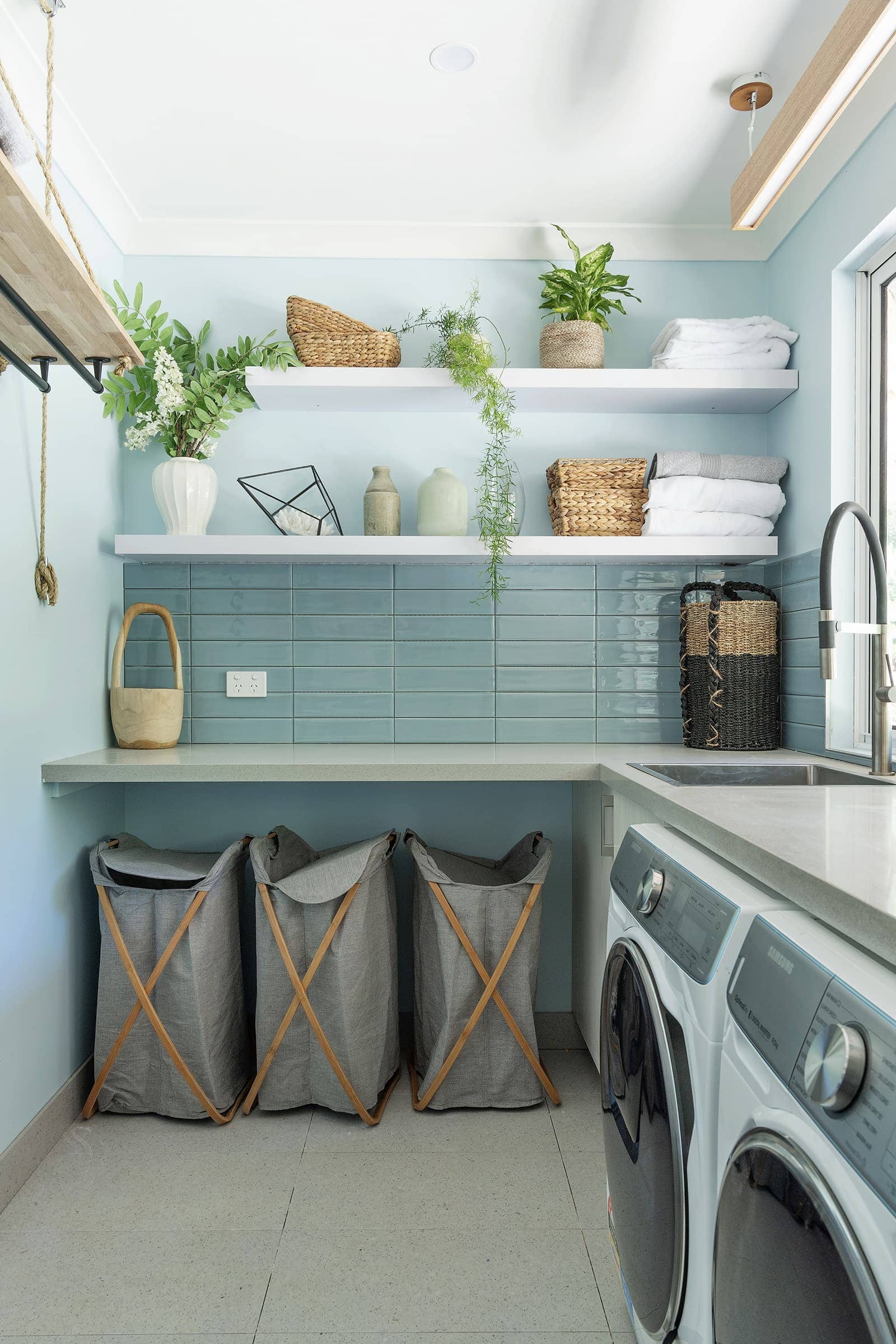 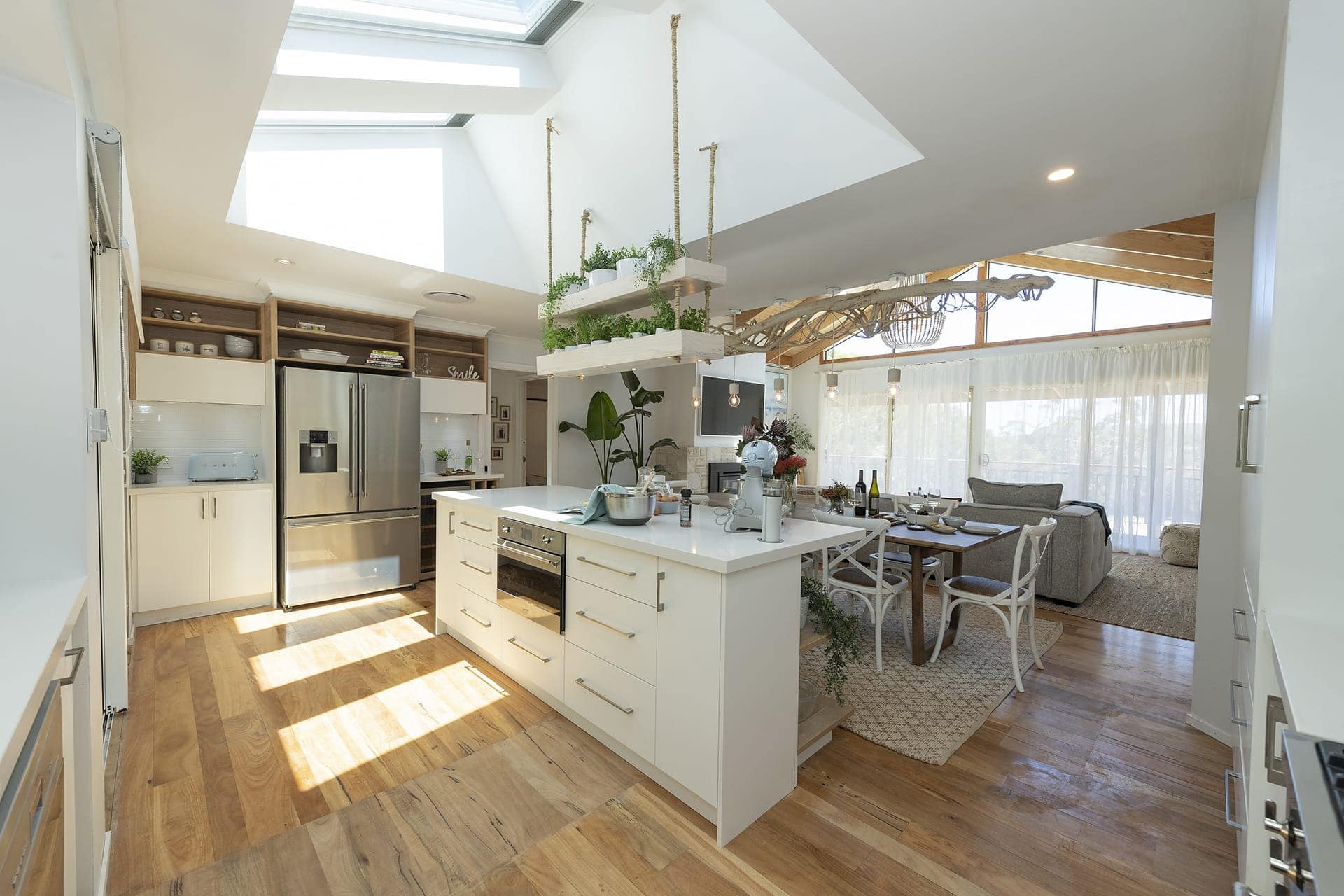 The Kitchen and Dining were also Stunning

My eye is going straight to the mishap with the flooring in the kitchen above. Looks like someone didn’t order enough and had to patch in a different coloured plank. Outside of that, this space feels very successful to me.

House Rules must have a sponsor this year in the skylight space, and I’m really happy about it. That entire open ceiling, with the light flooding in, and that herb garden draping down over the benchtop: it’s everything! I want it all and I want it now. Truthfully, I’m not sure most people could reach the top shelf of the herb garden, but it’s lovely to look at.

I also love the coloured appliances scattered about the kitchen; a nice way to add hue to a muted zone.

This isn’t a high-end kitchen. It doesn’t have that sense of luxury you might see in a kitchen on The Block, for example. But I like that this feels achievable for people to try at home. You could pull something like this off quite affordably. And it fits right in with the house rules and the overall style of the home. It’s light, bright, beachy and casual.

This open-plan area has a great sense of cohesion considering the kitchen, dining and living were executed by different teams.

Below in the dining room, I’m also really pleased. Great table and chair choices, great rug, good styling on top of the table. I even like the branch sculpture on the ceiling above the table. The hanging pendants detract from it though. It’s a one-or-the-other situation for me here. And the branch is far more interesting that the five white pendant lights. 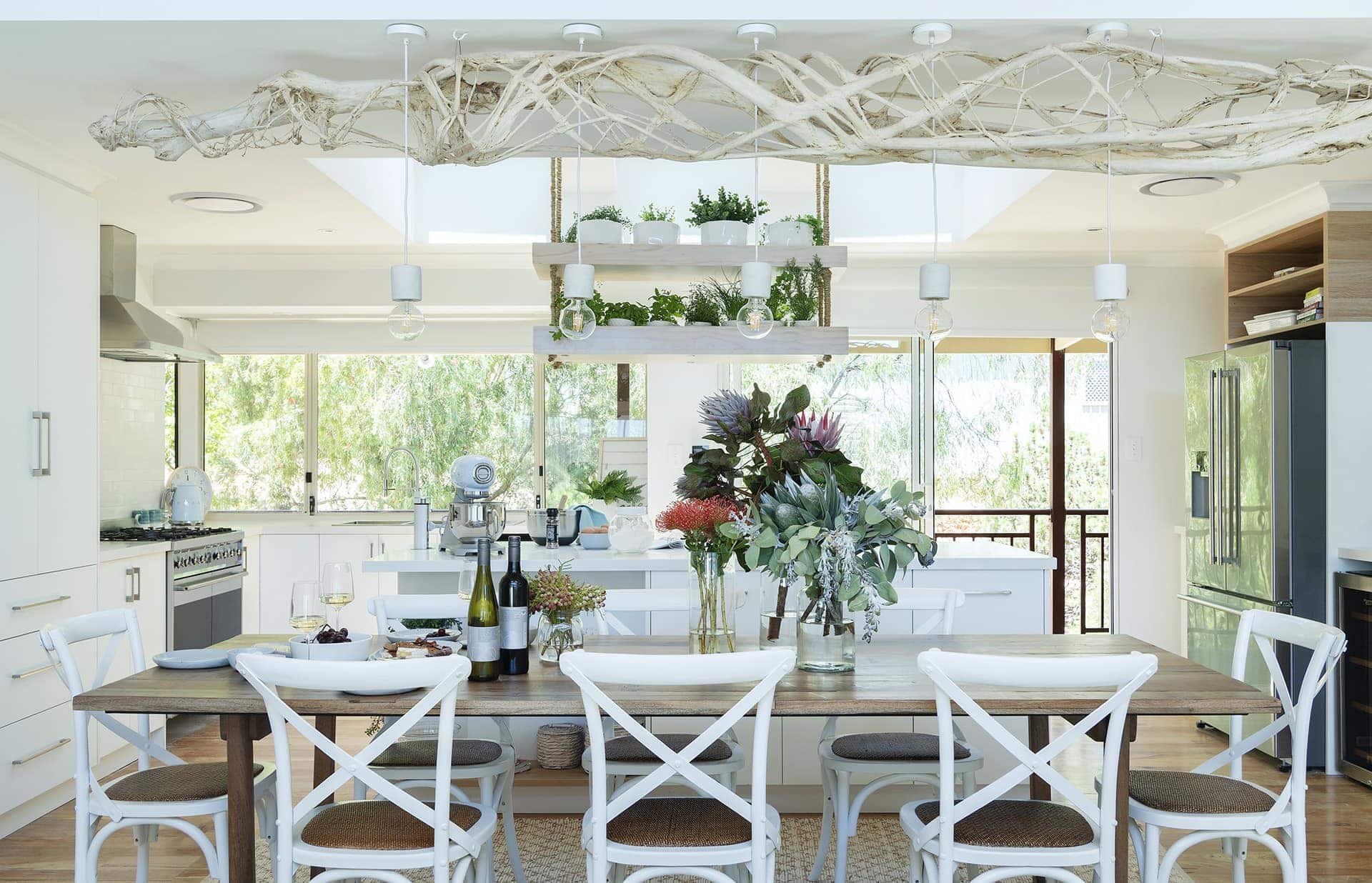 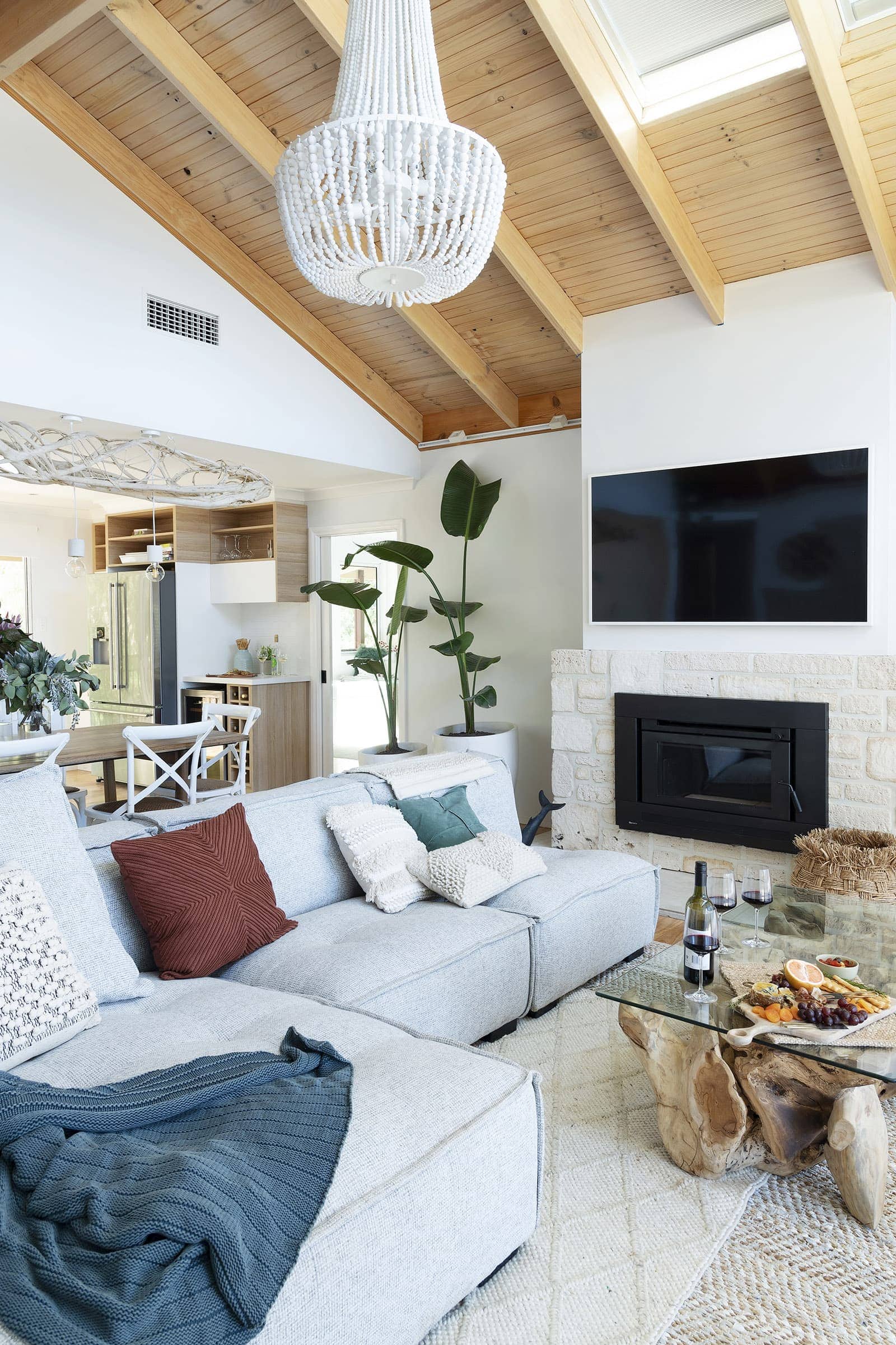 We’re headed toward the rooms that didn’t quite work out, but the living room just scrapes into the ‘successful’ category for me. That’s based more on how it looks than how it functions though.

From a stylistic viewpoint, the aesthetic here matches the adjoining rooms perfectly. The colour palette feels calming, the textures used in pieces like the sofa and rugs feel cosy and tactile. And I love that furniture like the coffee table gives a nod to a coastal vibe without feeling too intentional or literal. It’s a relaxed space you could chill out in with wine for hours.

The bohemian elements in cushions and baskets are a nice addition, and I adore the clay pendant light too. This whole home screams Airbnb getaway to me and I want a weekend here immediately.

The downside, of course, is that there’s a TV mounted above a fireplace but the sofa is pointing away from it. Not only can you not watch TV, but the person sitting on the end closest to the fire risks third-degree burns while everyone else goes cold. Functionally there are a few issues here! 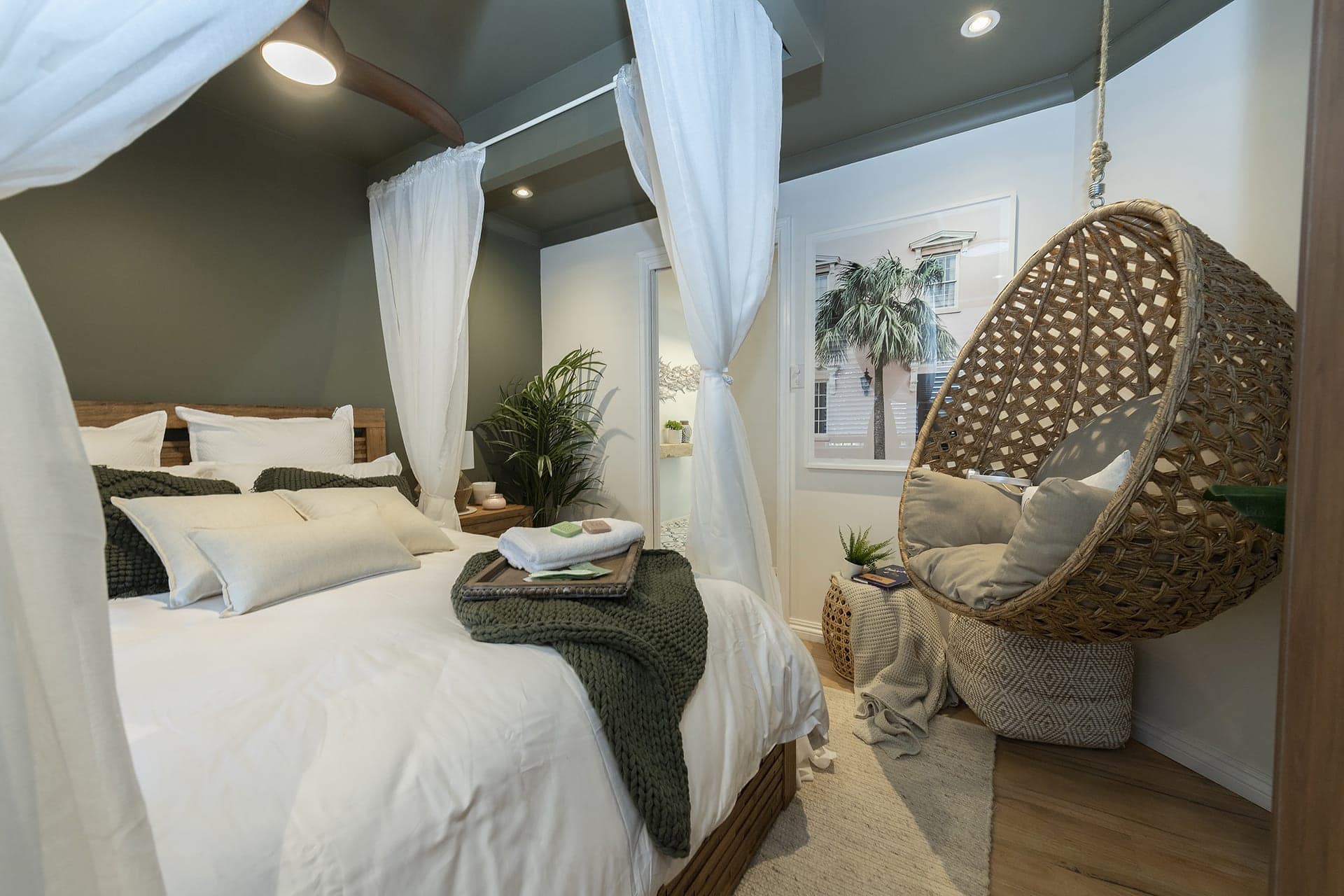 Two Bedrooms that Almost Got There

What a shame about the bedrooms. Both have a tonne of promise, but there was an issue in each that stopped it realising its full potential.

In the space above, size and scale were problematic. The room is quite small, and as was pointed out… it’s too cramped a space to install a hanging chair. The concept of a four-poster bed is a good one, but again… the room isn’t large enough to house it. It’s a real shame because the colour palette in here is amazing. That shade of green is pure heaven. The styling and accessories and art – they all work. It just feels cramped.

Below, size and scale were working, but the colour palette left a bit to be desired. It’s a shame in this space too, because I really like the look they were trying to create.

The main issue is that stark white headboard against the bright blue wall. The tone of the blue needed to be far darker and muddier. It would have grounded the room and made it feel more mature. In addition to that, the white headboard and white quilt cover and white curtains are a tad too much. I’d change the headboard to a light grey or leave it raw timber. It’s visually quite jarring.

I really do enjoy the mix of new and old in this space though. Love the pendant. Adore the suitcases. The colours of the pillows and cushions are spectacular too. This room just needed a few tweaks. 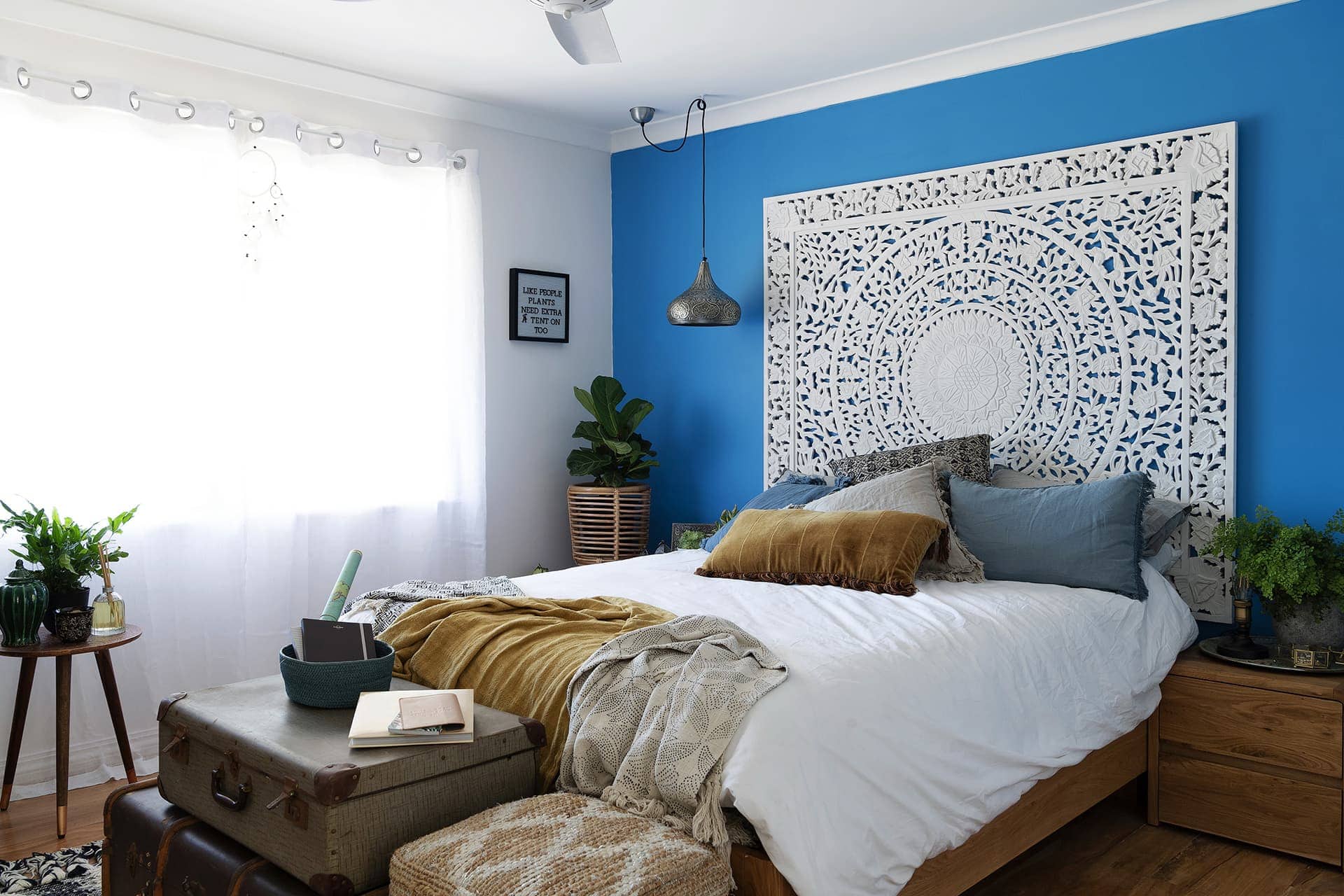 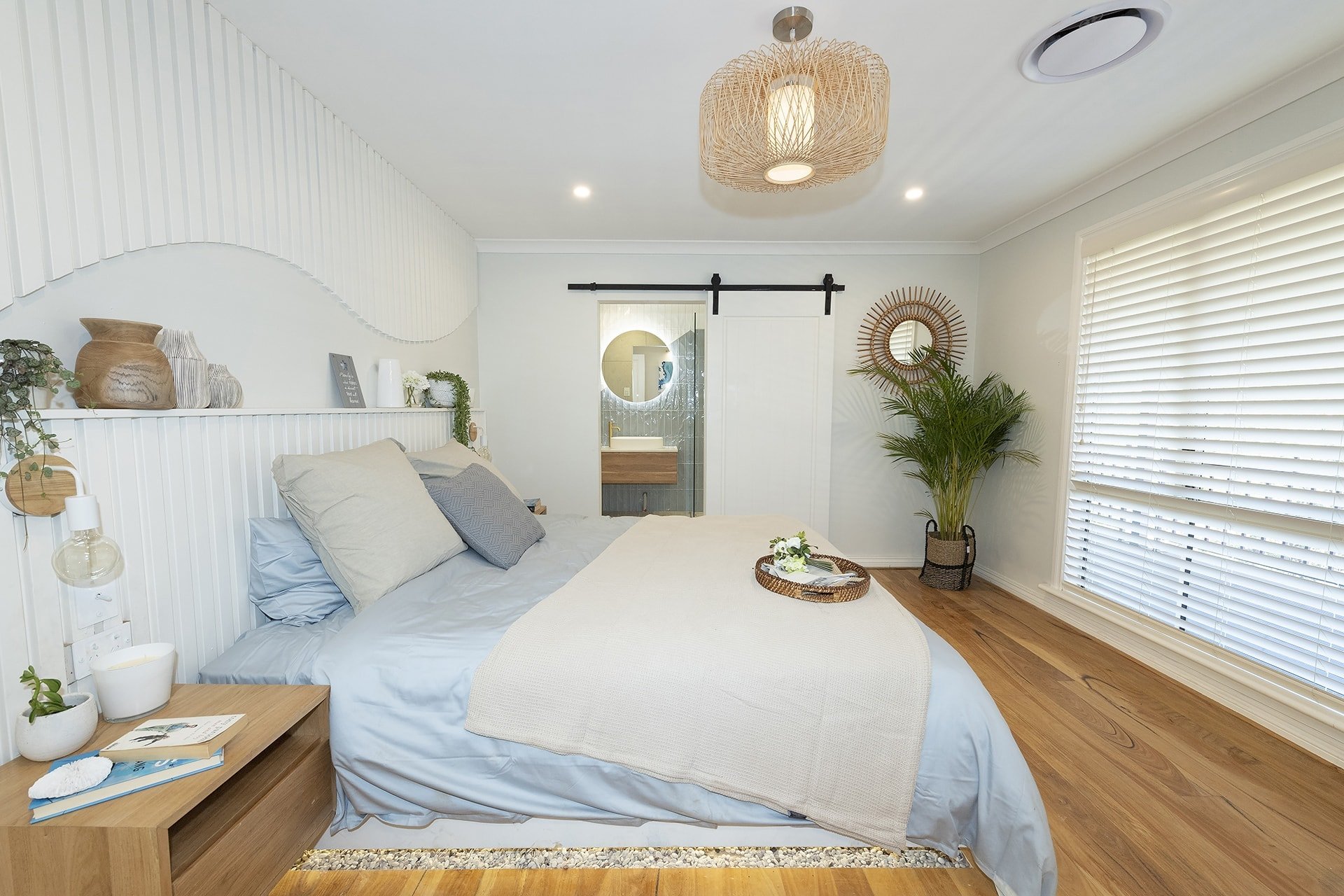 And One Bedroom that Didn’t

The bedroom above feels unresolved to me. The colour palette is quite drab. Some darker blue tones on the wall would have helped give this space some depth and character. As it sits, it’s washed out and there’s nothing of interest to capture your attention. I admire the attempt at creating a feature wall moment with the panelling, but all that white on white really let it down.

As was pointed out, the pebbles were an odd choice. I like a quirky idea here and there. I love it when people think outside the box. But it feels very arts and crafts to me; a bit cheap and nasty.

Below, the dressing room is… I don’t even know what to call it. I’m actually quite confused by it. We step up from carpet onto a raised, bright turquoise, timber platform… for what? It’s like a therapy chair inside a cabin on a weird weekend retreat where you close your eyes and someone gropes you without your consent. And the creepy garden section; what’s that all about? The whole thing is a mess. 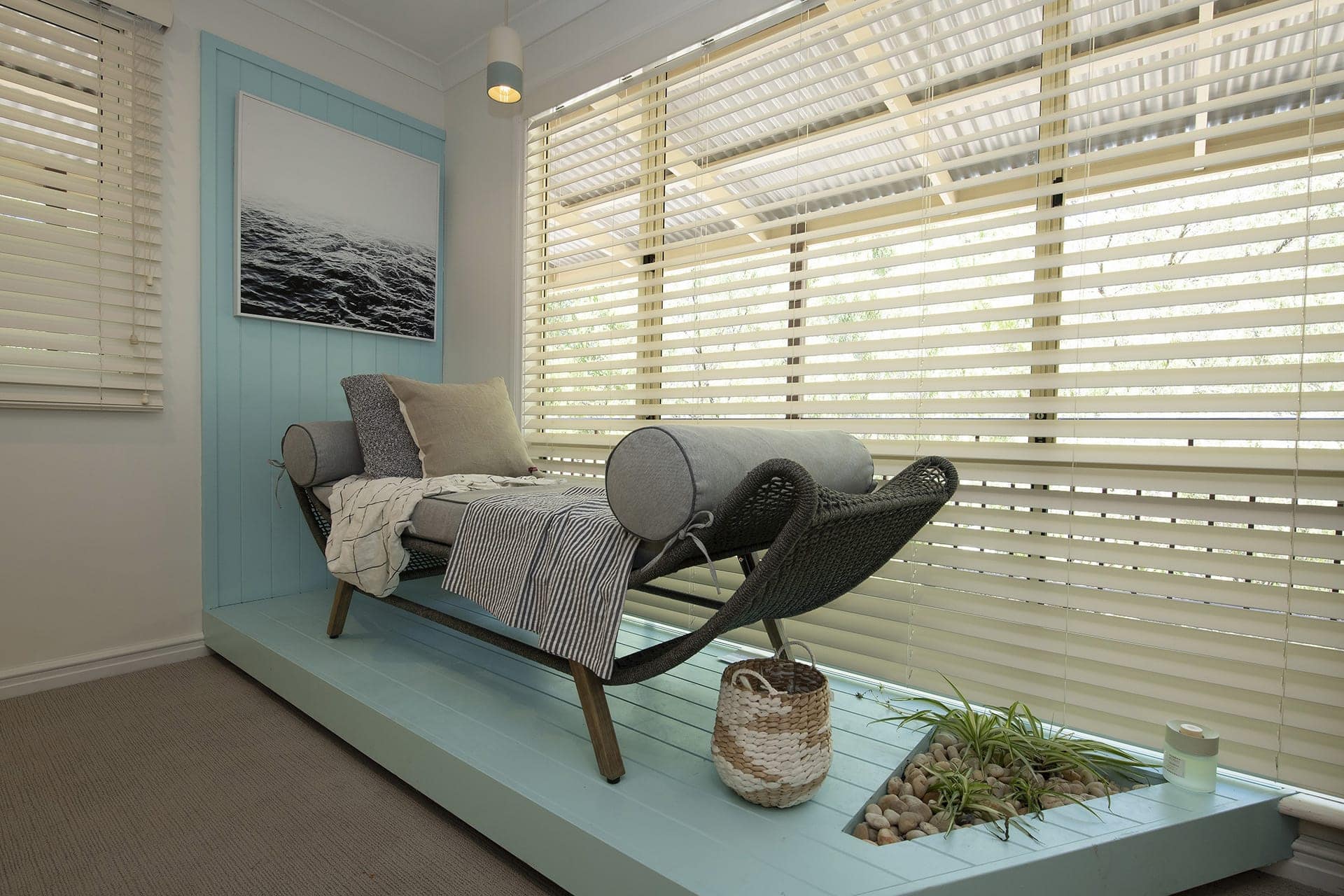 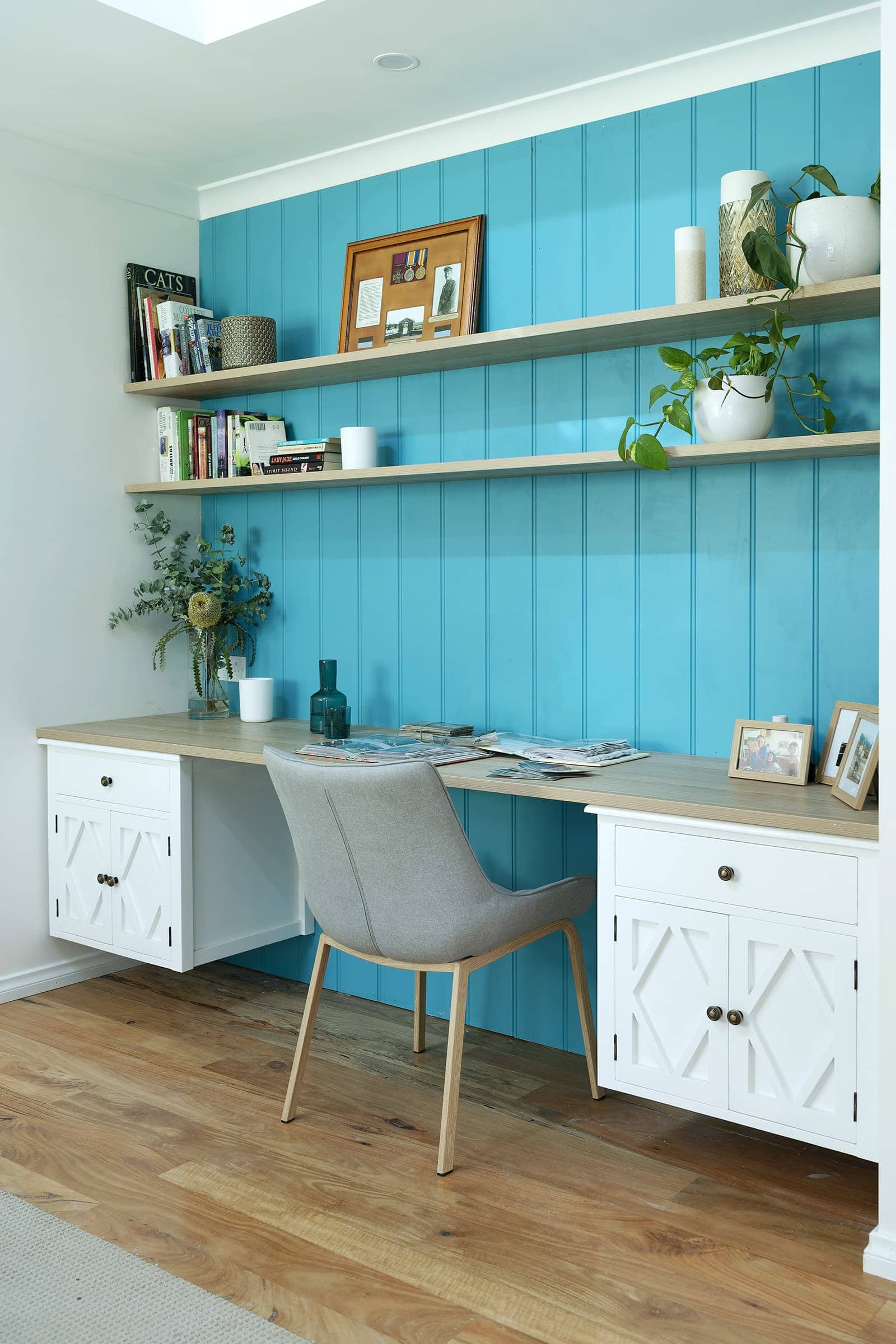 My Vote for Least Successful Spaces

The study above and the entry below get my vote for the two spaces that failed most. The colour on the wall of the study is just diabolical for an adult space. And the styling just isn’t there.

Below, I find the flooring choices quite bizarre. Why is there a dirty, carved-out carpet section in front of the built-in bench seat? It’s a really odd choice to make. This area would have looked so much nicer if the flooring was consistent. And the degrees on the wall I’m very bewildered by as well.

There was an opportunity around that reading nook to do a nice lighting feature but nothing happened. There’s also nowhere to sit a drink, which is enough to deem the zone unusable in my wine-drinking opinion 😉 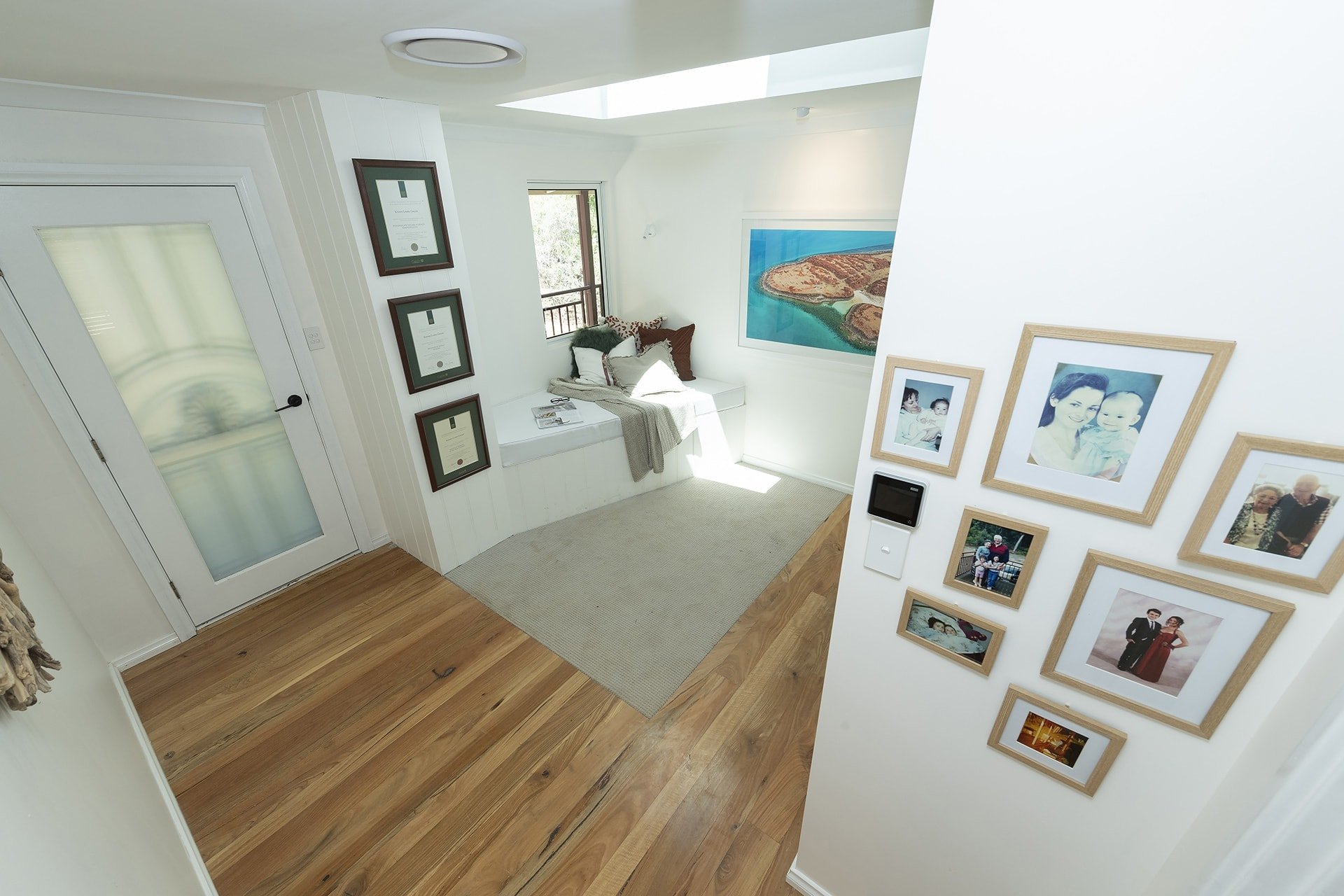 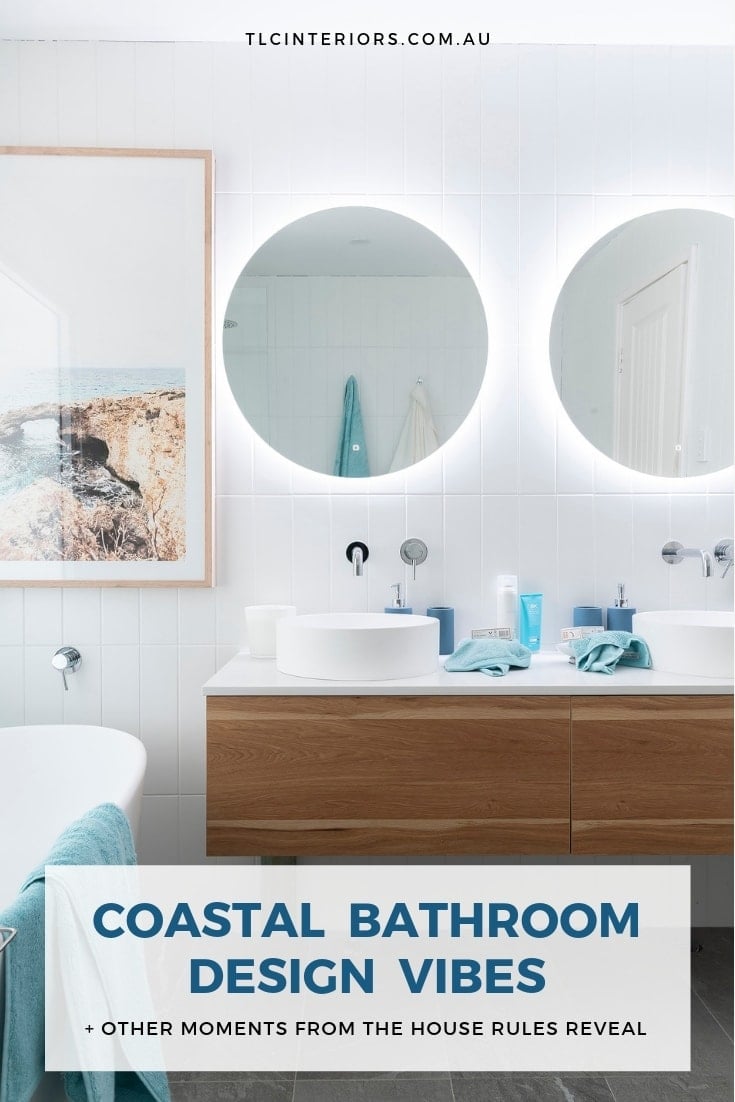 What did you think of the House Rules 2019 Eliza and Mikaela reveal? Drop me a comment below and share which rooms were your faves and which ones you disliked.