So the House Rules 2020 Kimmy and Rhi reveal didn’t necessarily end the series on a low. But I’d be lying if I said it ended it on a high.

Looking back on the reveals this season as we enter grand final week, there were actually some really good rooms. In some of the properties you’d only need to make a few small tweaks to get the spaces looking lovely.

The Penthouse at the start of the season is without a doubt the worst of the lot (Laith and George’s a close second), but overall the series this year delivered some nice design moments.

But were any of those moments in Kimmy and Rhi’s whole home reveal? Well, let’s scroll on and find out. I do have a few rooms I want to discuss with you that I don’t mind; ones the majority of you might think are ghastly. And of course, there are some spaces that need to be gutted and re-done from the ground up.

So grab the popcorn and let’s get into it. You know I want to hear your opinion on the rooms too, so feel free to comment at the end of the post. 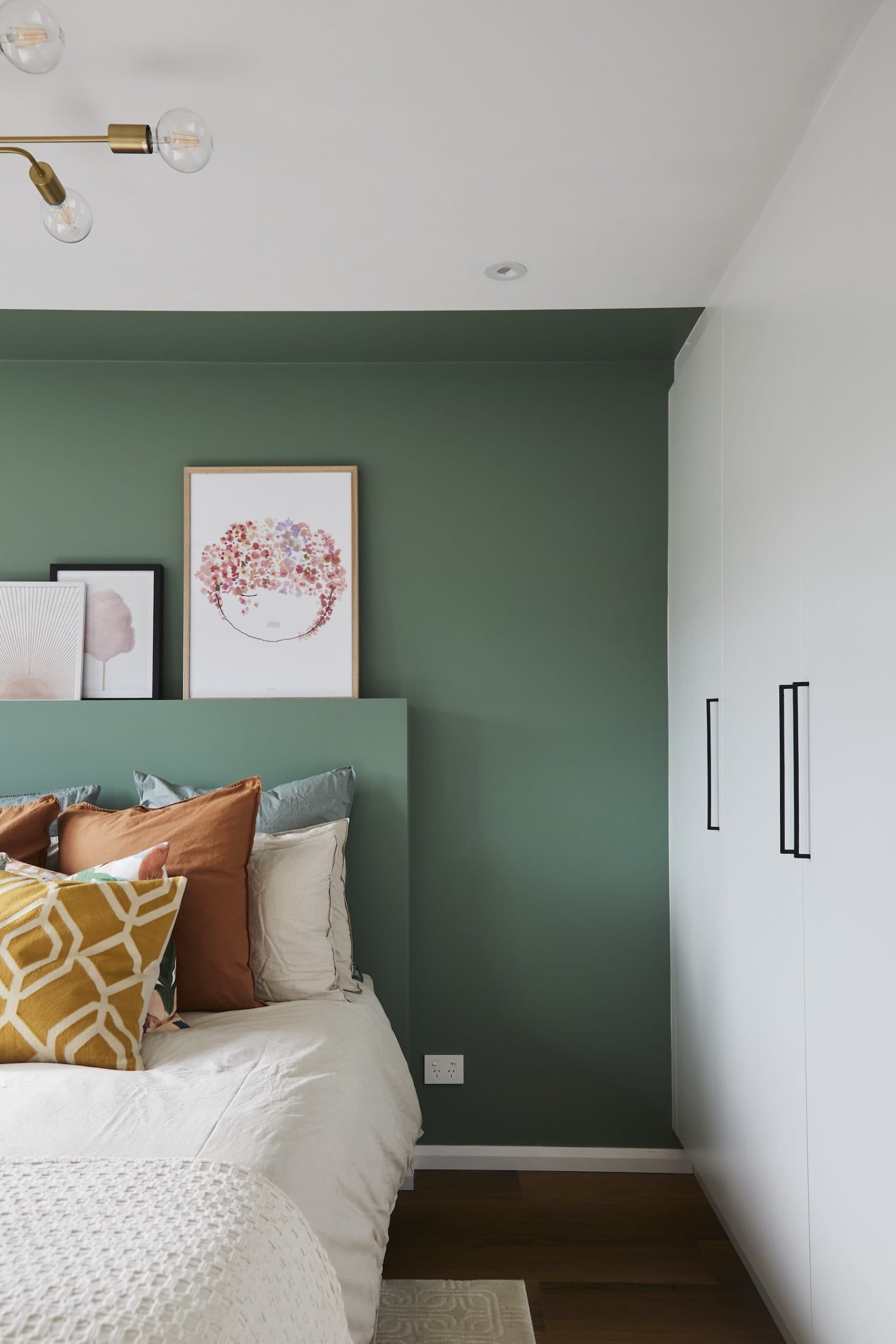 Let’s Start with the Green Bedroom

We’ll kick off the House Rules 2020 Kimmy and Rhi reveal with this bedroom above. Because honestly, I do think it’s one of the better spaces. When I say that, I mean the colours are working wonderfully together. There’s a good sense of contrast between the green and white. And then the decorative moments bring a nice balance to the room (those terracotta European pillows are everything).

And as you well know from this post on how to style a bed properly, the cushion game here is strong. I had to call that out because I do love me oodles and oodles of pillows and cushions. If your bed doesn’t resemble a jumping castle, can you even call it a bed? No, you cannot.

That said, functionally it falls apart a little. I mean, nobody will ever convince me that no table beside a bed is a good idea. I see they put a glorious pink locker from local brand Mustard on one side of the bed. But I guess you’re screwed if you want to sleep on the right side.

I understand the wardrobe door would hit a bedside if you put it there. But that just tells me that the spatial planning here was unsuccessful. 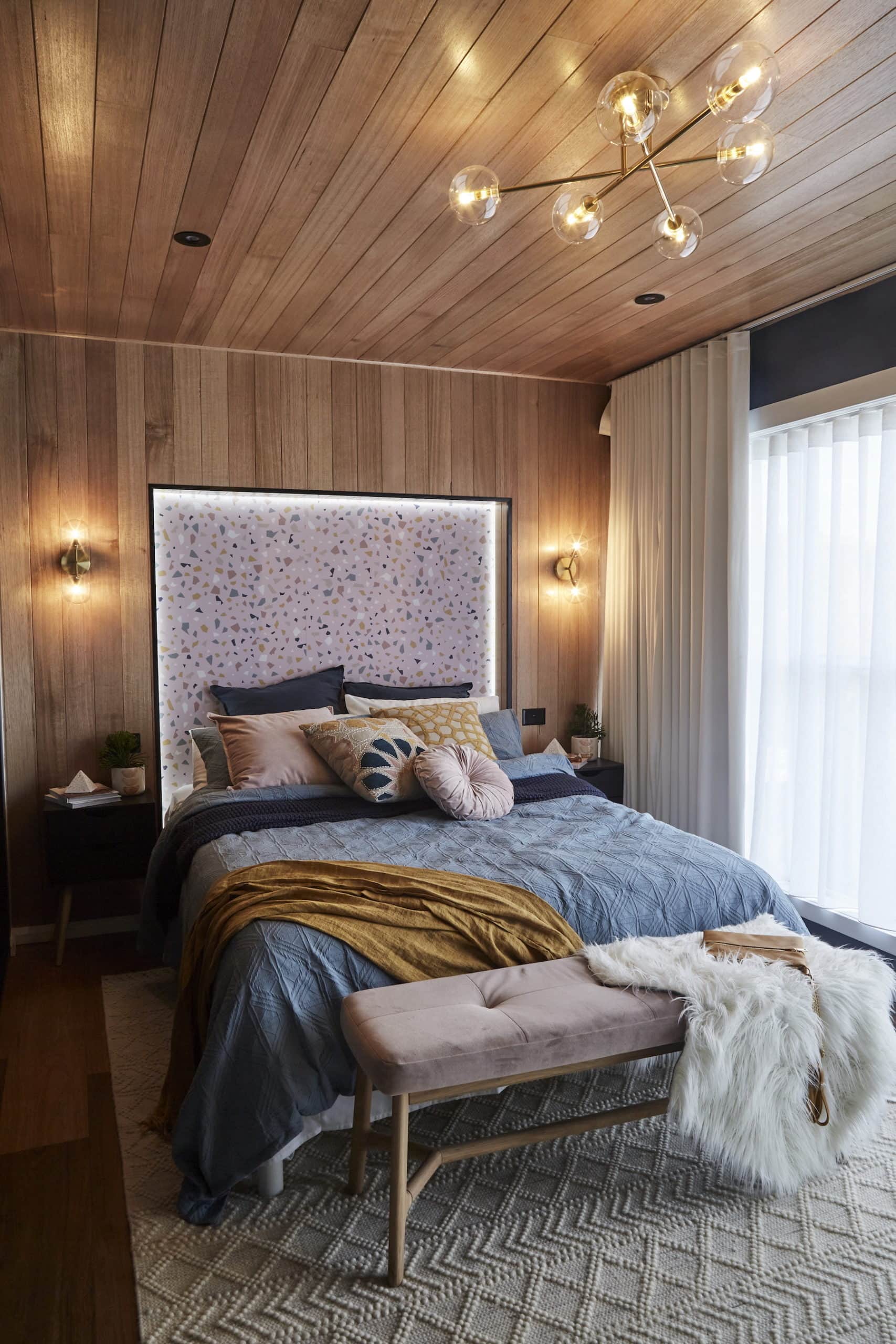 I know, you probably didn’t expect this, but I do indeed think this wacky room works. It’s not at all my taste and it’s a little all over the shop, but it ticks a lot of design boxes.

The balance of colour works. There are warm and cool tones here, fairly equally balanced out. There’s a mix of hard and soft, and a mix of masculine and feminine. Does it feel a little arts and crafts? Sure. But it’s a somewhat elevated DIY look and I do feel the terrazzo wallpaper niche gives it a point of interest.

Now, it’s not all amazing. The wall lights are quite high and impractical. A suspended pendant light would have been nicer, with no exposed bulb. And I do take issue with the tone of the wood panelling, as well as the amount of it. The timber is giving me sauna vibes. There’s just a lot of it, especially considering the flooring is in a similar colour.

But I do look at this weird room and find it oddly charming. Am I insane? 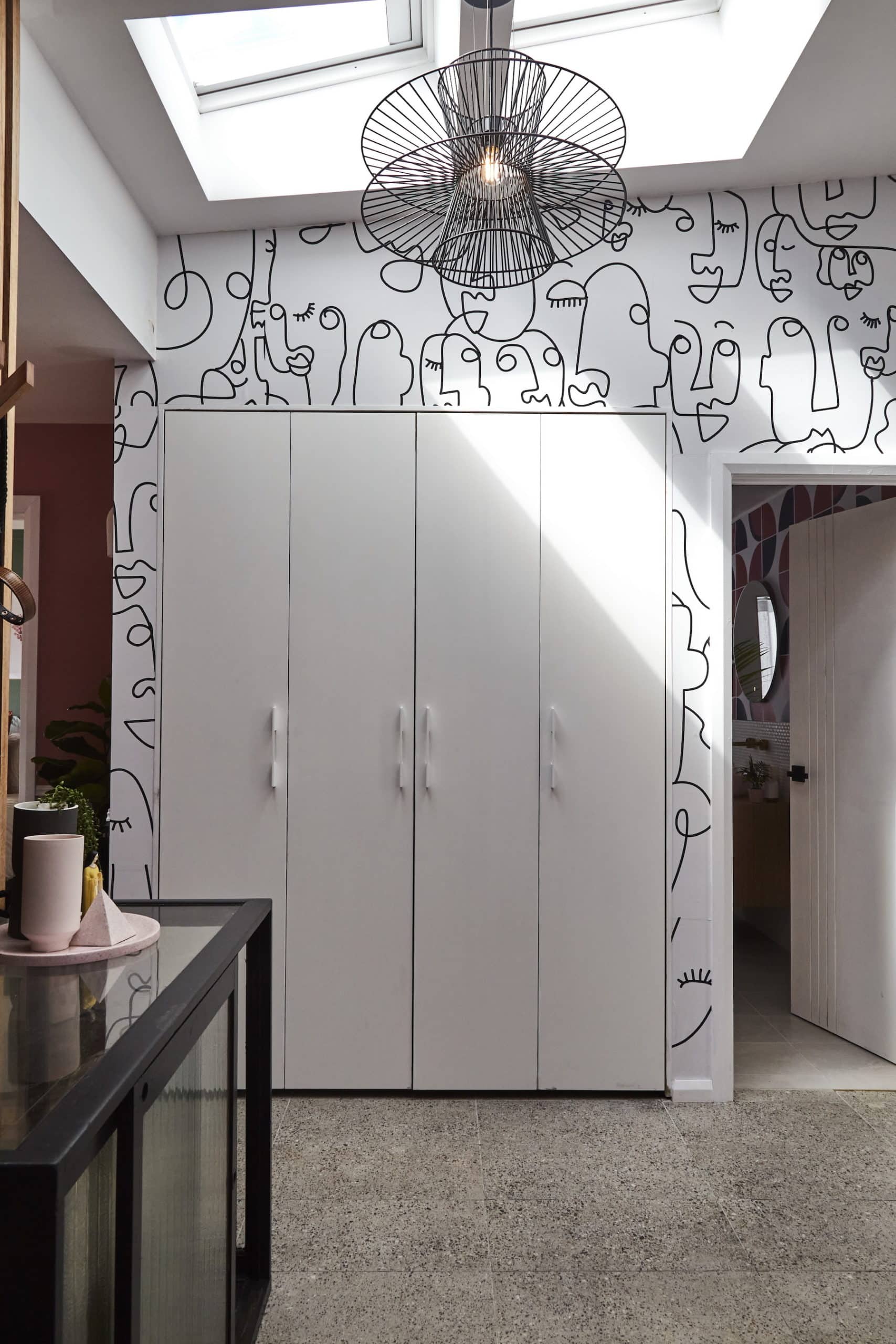 OK, I say laundry, but I really mean that I like the wallpaper. I know, it’s a lot. But I coincidently showcased this wallpaper in my faces decor trend roundup recently, so to see it executed here has made my week. I know, I need to get out more. But I’m in isolation and rarely leave the house, so small things like this now excite me.

Now, again, I say that I like the dining room but it’s really just a few elements that excite me. For example, the wallpaper you see below and the art hung on it is a winning combination. The sharp geo pattern and the soft florals play really well together.

The sideboard and the sheers I am also liking, but then everything else just feels a little ‘mid-Century 101’. That entire dining table and chair situation feels dated, expected, and not at all interesting.

I don’t know whose idea it was to put creepy old florals over the pendant light. But it’s an idea I need them to never put into action again. 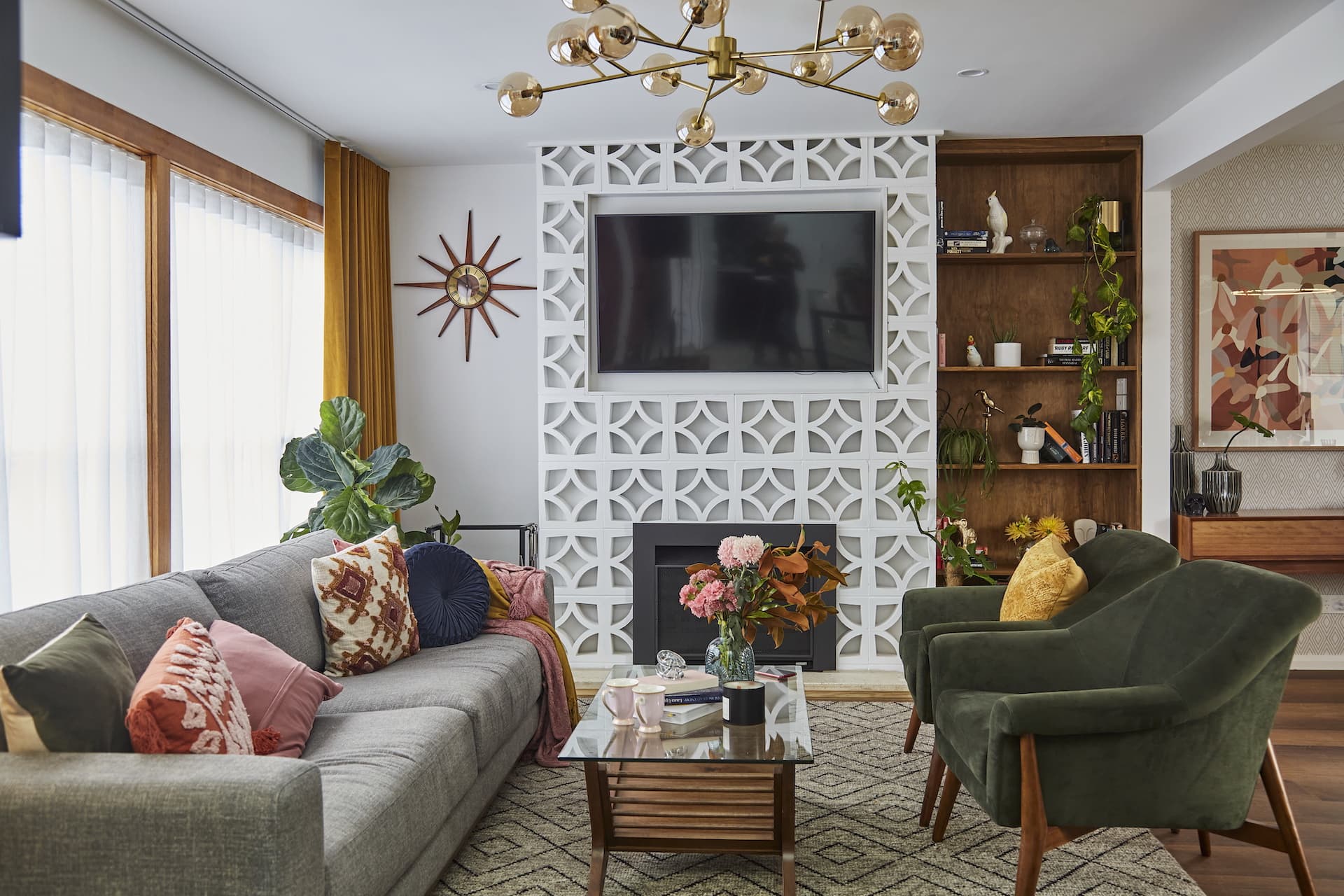 I Take Issue with the Living Room

I don’t have issues with any individual pieces here. They are all lovely in their own right. And I have nothing against mid-Century design. In fact, I plan on injecting a bit of it into my new apartment.

But here, it’s not modern, interesting take on a classic style. It’s as if the team Googled ‘Mid Century Modern’ and then got everything they saw in the image results. It’s so retro that it looks like a movie set. The clock, the curtains, the treatment around the TV; it’s all very generic (the opposite of the house rules this week).

And there is no focal point. I always say a room needs one focal point. But here your eye goes everywhere. There are no visual highs and lows; no safe spot to rest your retinas. It’s all very visually chaotic.

Functionally, it of course fails. I loathe living rooms that are oriented this way, where you could never actually watch the TV without becoming the little girl from the exorcist. You’d need to have your head turn in ways that are not humanly possible in order to catch the evening news. The TV is also incredibly high for the size of the space.

The grey sofa and green armchairs can stay. I’d use those as my starting point and do the whole room again. 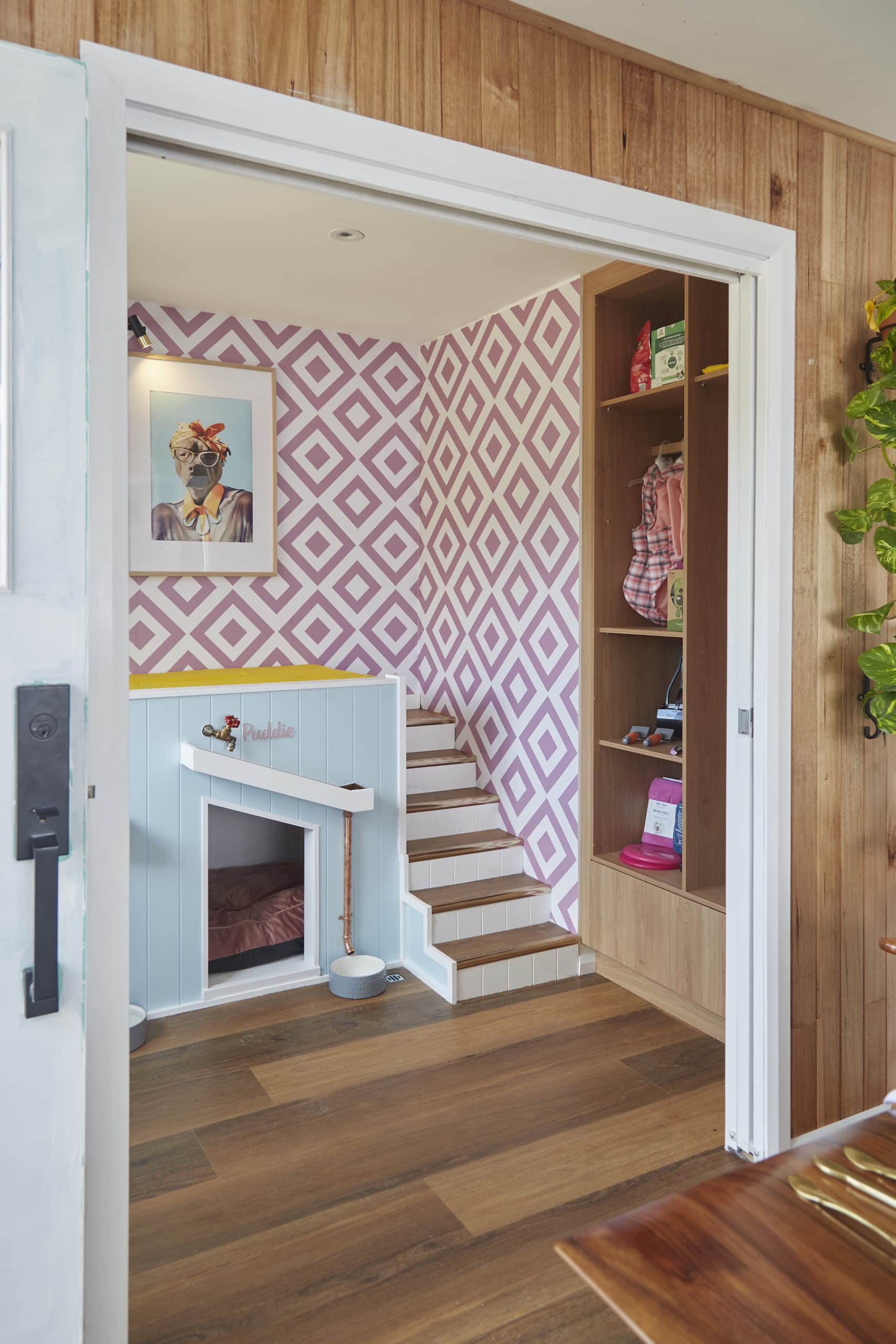 The Pooch Parlour is a Bit Naff

I know one of the house rules was to create a plush pooch pad and playground. But this does feel like a cheap dog grooming parlour. It’s feels very commercial premises and not a residential one. It has no homely feel too it and it doesn’t seem to work stylistically with the other rooms of the home.

Do we really need an exposed pipe that runs water down into the dog bowl? I applaud their sense of adventure here, and it was clear they wanted to go bold and make an impact. But for me it’s a miss. 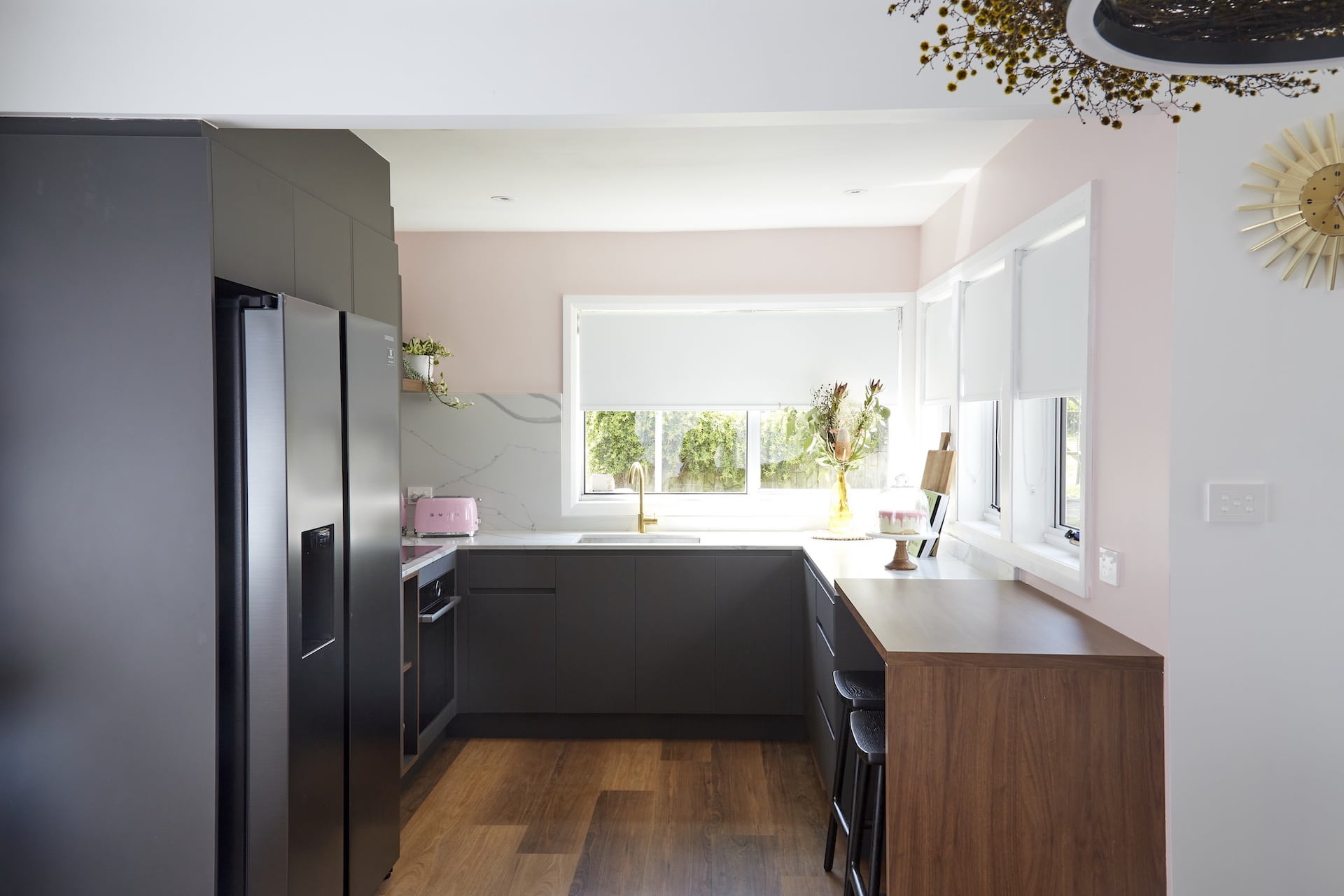 The Kitchen and Entry: Not so Good

The kitchen is a bit lop-sided. One side is a towering wall of darkness and then the other side is a meek white and pink delight. It’s not working visually. I would have taken pink out of the equation here altogether. Or I would have gone balls to the wall and given them pink cabinetry. As it stands, it’s not enough and yet too much. We needed full commitment on the colour front.

I do think the black cabinets make zero sense given the house rules. The girls didn’t ask for dark and moody, so it’s an odd choice to give them that in the kitchen. The breakfast bar is also an odd decision. Who wants to sit there and face a half window, half wall? If you don’t have space for an island with stools at it, forego stools altogether.

Below, the mixed flooring is killing me. And the piece of furniture that’s too large for the width of the wall is hurting too. They also have an entire merchandising wall in their pooch parlour, so can we keep the dog leads in there? Nothing is really working here. Although I will say that I find the painting of Kimmy and Rhi kind of cute. 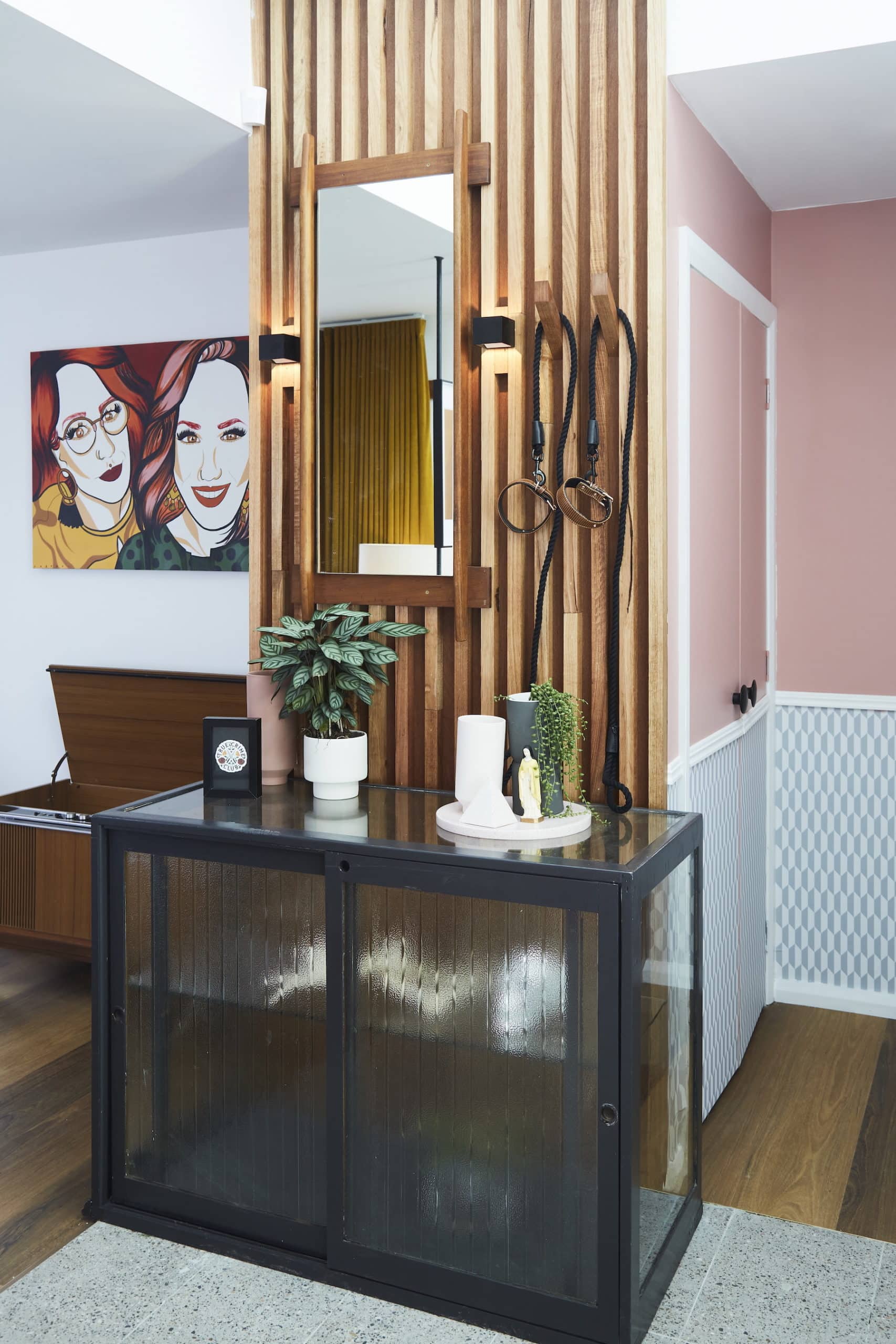 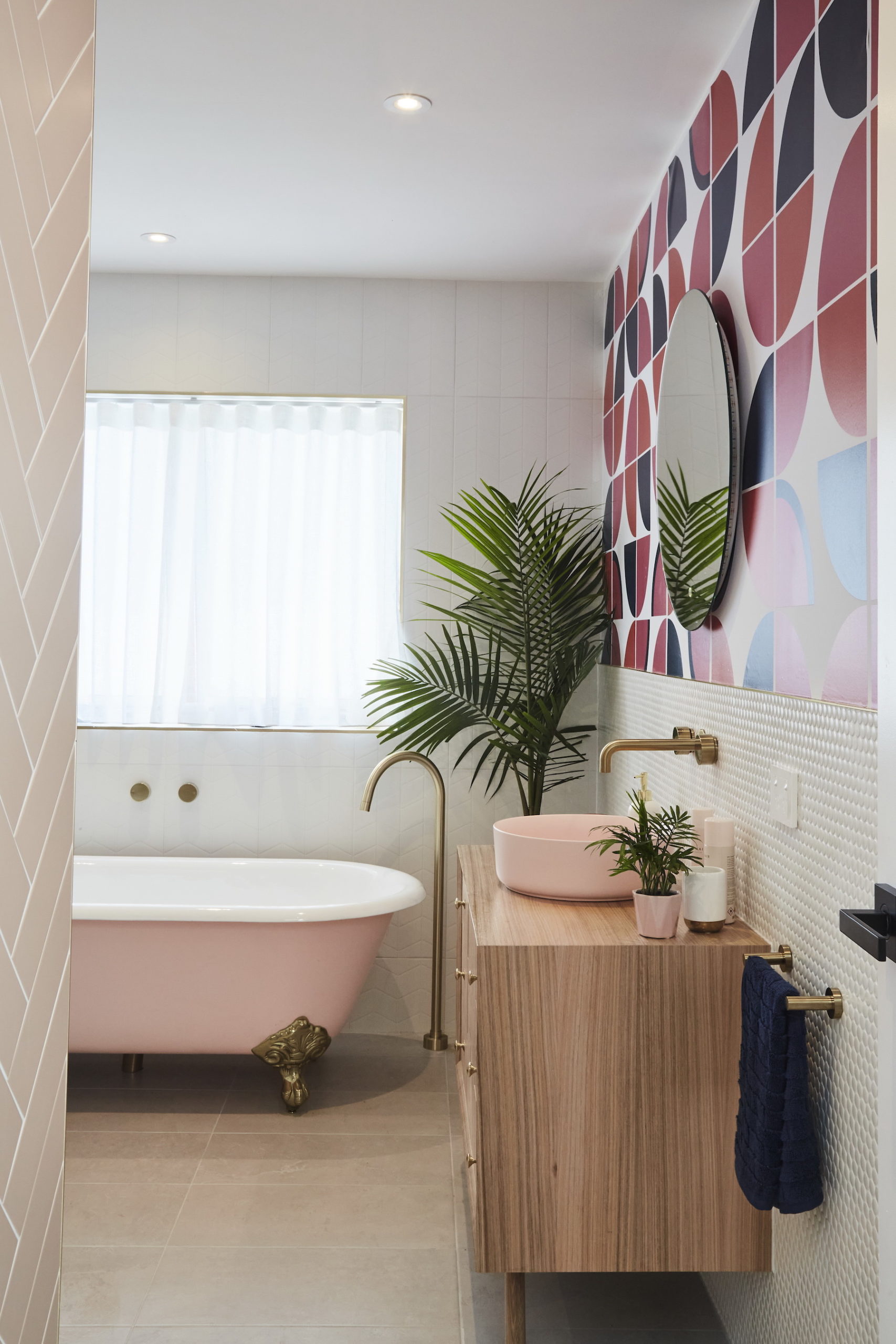 The Bathroom is also a No No

There were definitely some wacky rooms in this House Rules reveal. And you know I find some of them wacky-good. But this bathroom was wacky-bad, and it’s bad for a few reasons.

It feels overwhelmingly warm, for starters. We have so many warm materials and colours. The gold tapware, the pink bath, the pink tiles, the warm timber vanity, and then that horrible red wallpaper. There is no balance of warm and cool tones here. And so for that alone it’s a fail for me.

This room is also similar to the living room in that there are way too many focal points. What is the eye meant to go to? Which feature is your wow moment? Is it the wallpaper, the gold accents, or the bath? You can’t have a three-way focal point. It just doesn’t work.

This bathroom needs to be significantly stripped back. I would remove the wallpaper as my first priority. Then I’d introduce some cool greys to give it some more balance. Let the bath be the feature and let’s pare the other elements back.

Below, there’s nothing I like about this zone except the artwork. 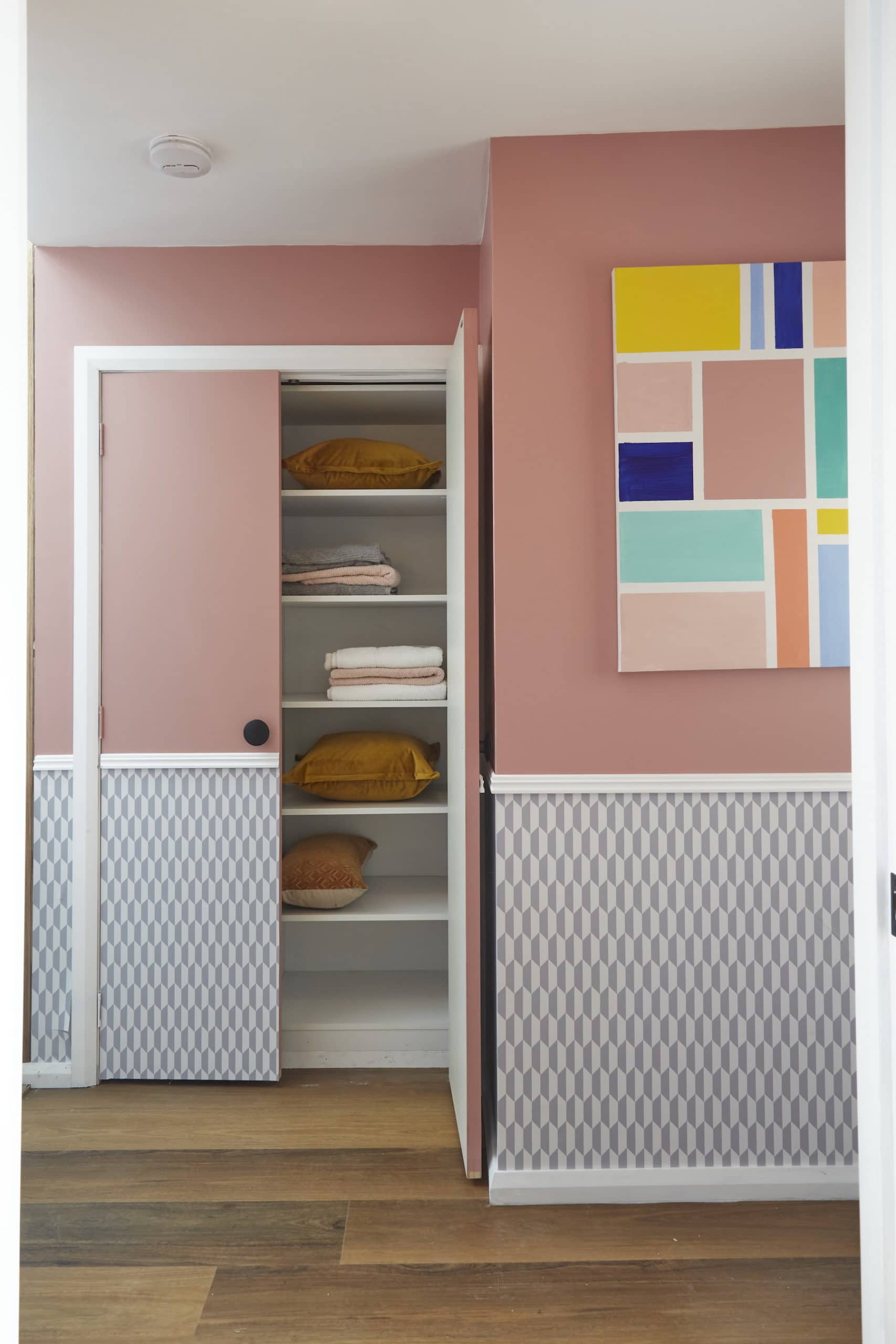 What’s Your Take on the House Rules 2020 Kimmy and Rhi Reveal?

What did you like from the House Rules 2020 Kimmy and Rhi reveal? Do you agree with my likes and dislikes? I’d love to hear from you in the comments below, so drop me a line and share your thoughts.

Want to see more from the House Rules 2020 Kimmy and Rhi reveal? Click here to see clips from the show.