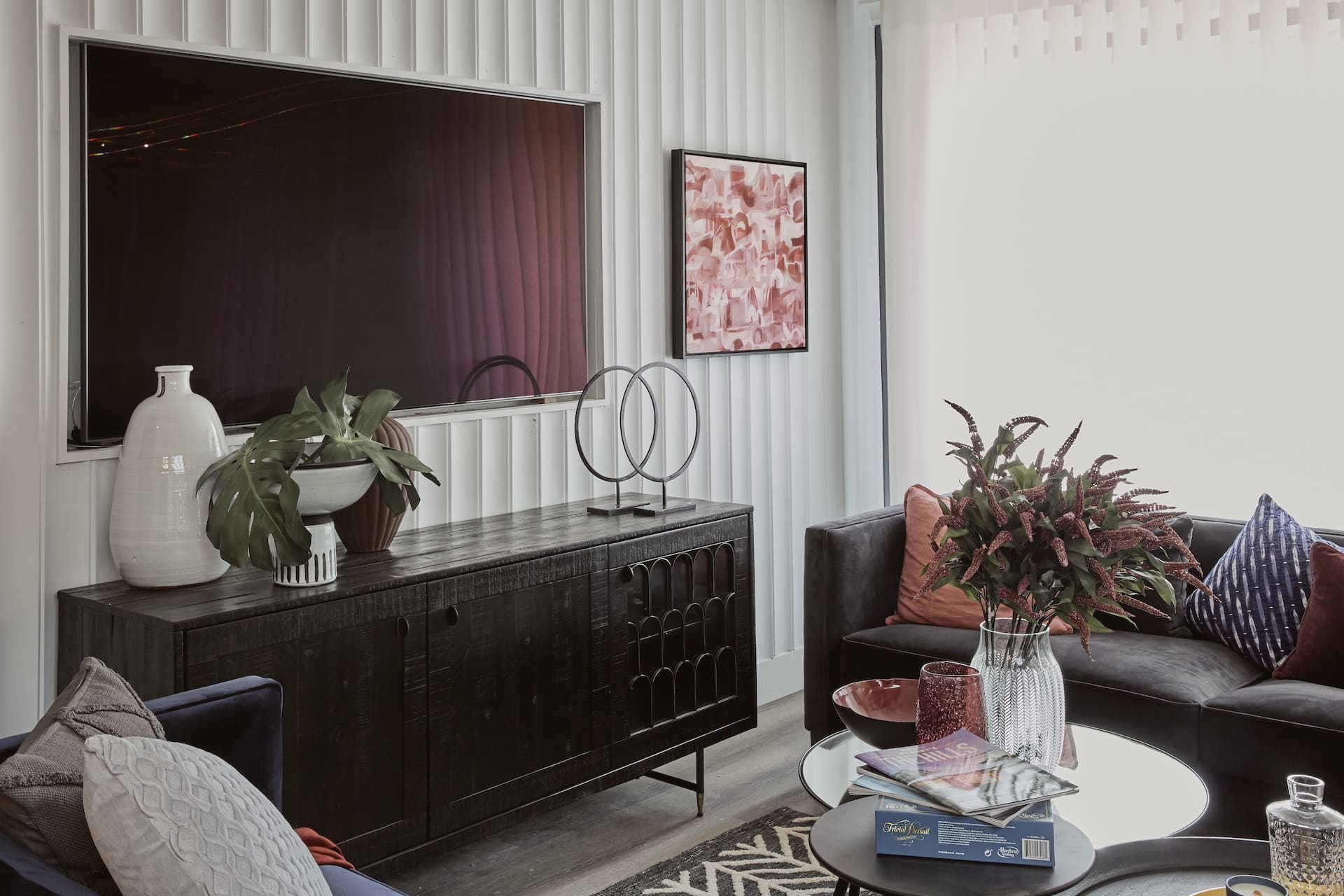 I have to admit that after last week’s mostly good reveal, I was feeling optimistic about this season. But then the House Rules 2020 Laith and George reveal just went down and I feel we’ve taken a step back.

That’s not to say that all of the rooms in the home were bad. But, well, the majority were. And I know the contestants are not designers, so we have to expect the execution to be pretty amateur. But this was just not a cute week. So below I want to call out a few of the nice spaces (there are only a few) and examine what didn’t work about the other zones.

It wasn’t just looks that let a lot of the spaces down, it was practicality as well. Some of the teams just didn’t think about how a room would be used day-to-day. And so Laith and George will be left with spaces they will have to move around or completely start again with. And nobody wants to do that.

Let’s dive into the House Rules 2020 Laith and George reveal below. 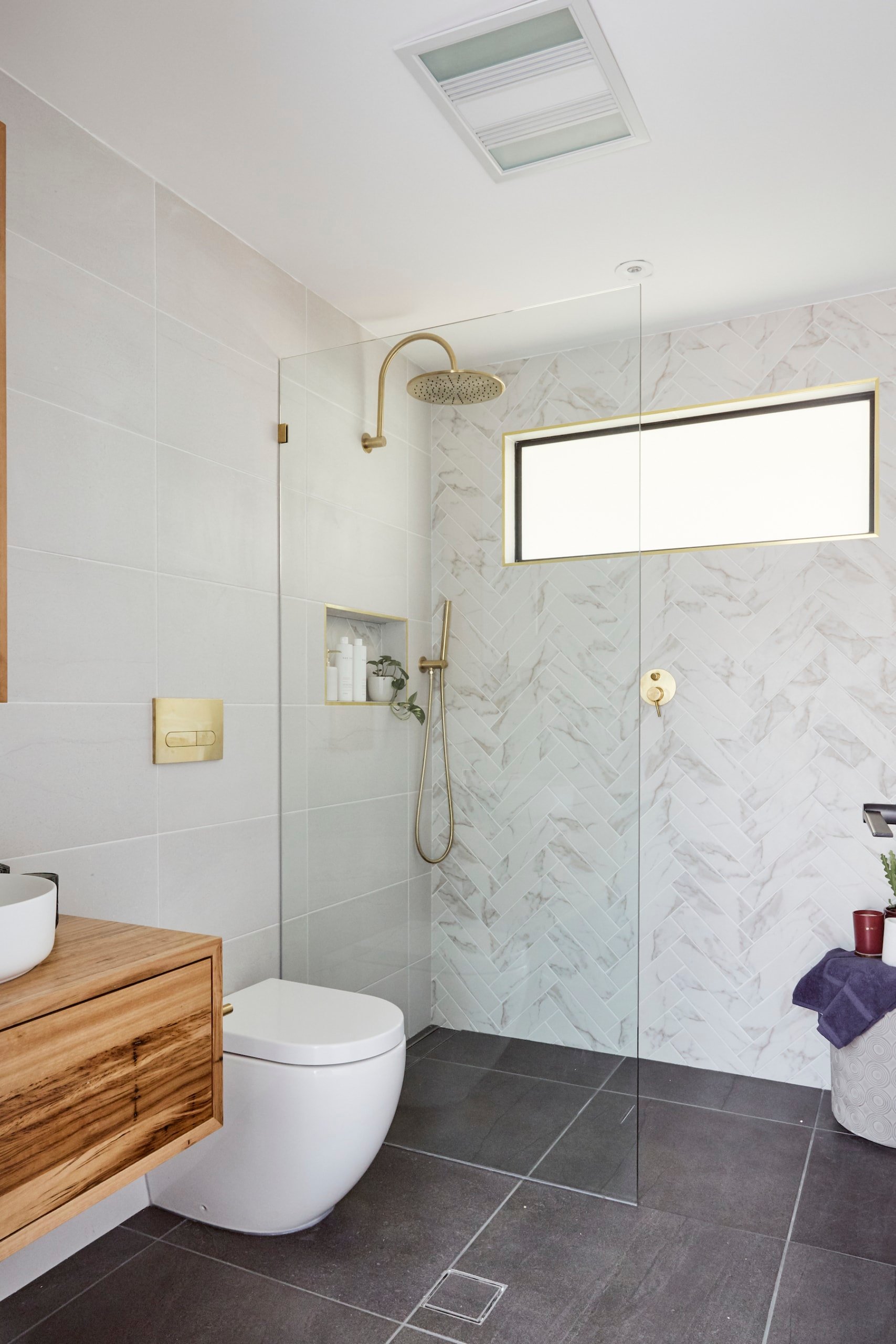 The Good: This Chic Bathroom

There’s no denying that this bathroom is hands-down the best room in the home. In fact, for the most part on House Rules, bathrooms are usually the best spaces, followed closely by kitchens. The reason for this is that there are less design inclusions to put into these zones, so there’s less potential to mess it up.

That’s not to say you can’t mess them up. I mean, remember this abomination of an ensuite from the 2018 season? And the other bathroom in this house, which I won’t even show you, was ruined by the inclusion of black pressed metal. So getting a bathroom wrong is entirely possible. But with some guidance on designing a bathroom right, which I’m sure the contestants are getting, you can pull off something like the winning space above.

The textural combination of timber, slate, brass and marble is a gorgeous idea here. It creates a wonderful sense of balance and doesn’t feel too masculine or feminine. The herringbone pattern of the wall tiles in the shower creates a stunning feature in the space. And sure, it’s been done to death, but it’s still a successful zone.

One thing that didn’t work: the brass trim around the window and recess. When it comes to blingy moments, you have to adopt the less-is-more approach. It was overkill here. 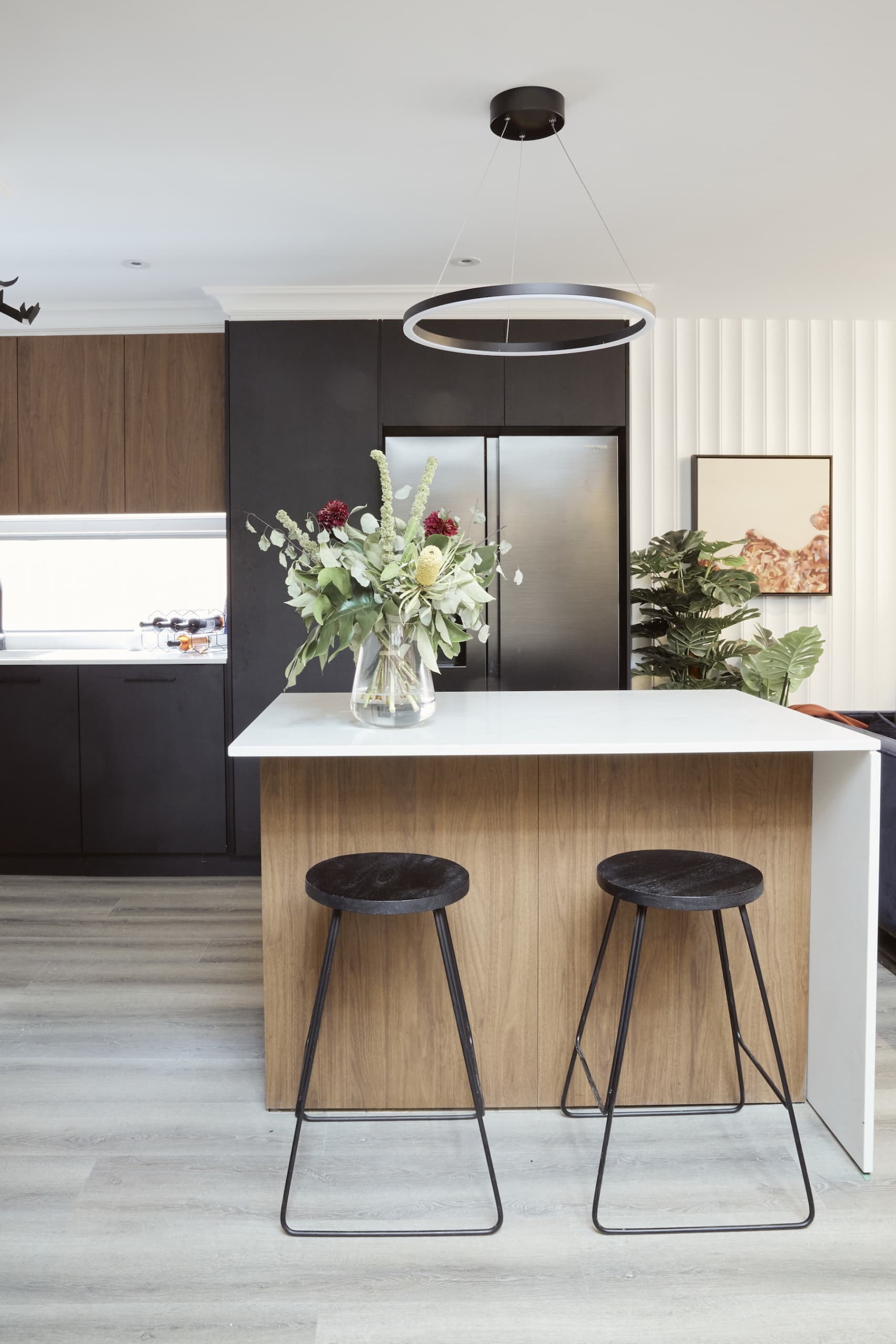 The Good: This Kitchen, for the Most Part

It looks like they were working with a small footprint here. I’m not sure that this is the most successful layout given how tight the zone comes across, but I don’t have the floor plans so I can’t be sure. I just feel some things could be moved around in this space to open it up more.

That’s the major issue I have here, but compared to the rest of the rooms in this House Rules reveal, it’s still on my good list. They were smart to mix up the cabinetry colours and have the uppers in the corner a lighter tone. If they were all black it would have been a major fail and come across as way too heavy and dominant.

The other win here is the choice to have the splashback panel behind the sink zone in glass. It does let light into the space, which is desperately needed. The sink and tapware choices are nice, and I’m also enjoying the coloured appliances in the corner. All in all a pretty good room.

I’m calling it: we must put an end to the circular pendant light above the bench. 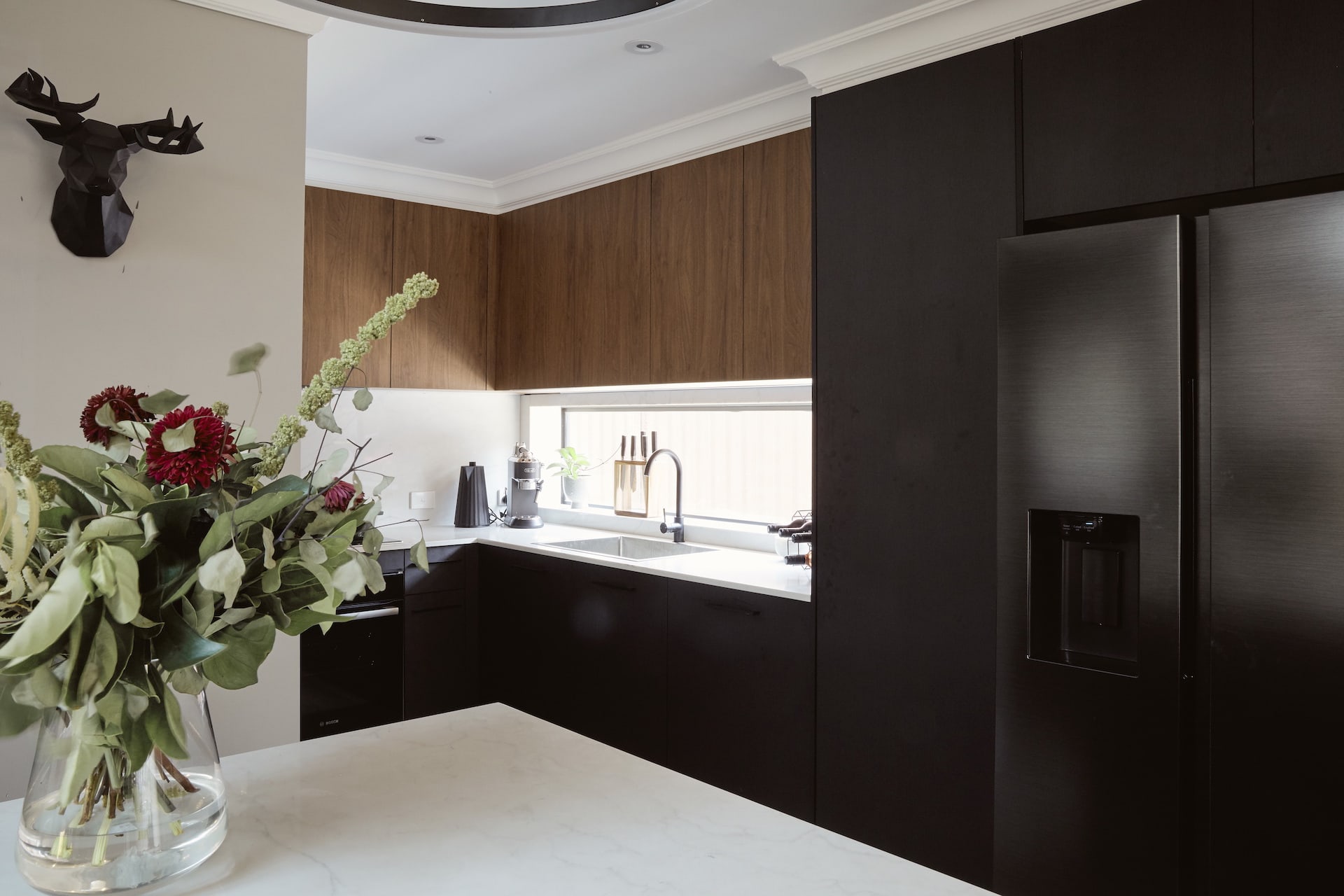 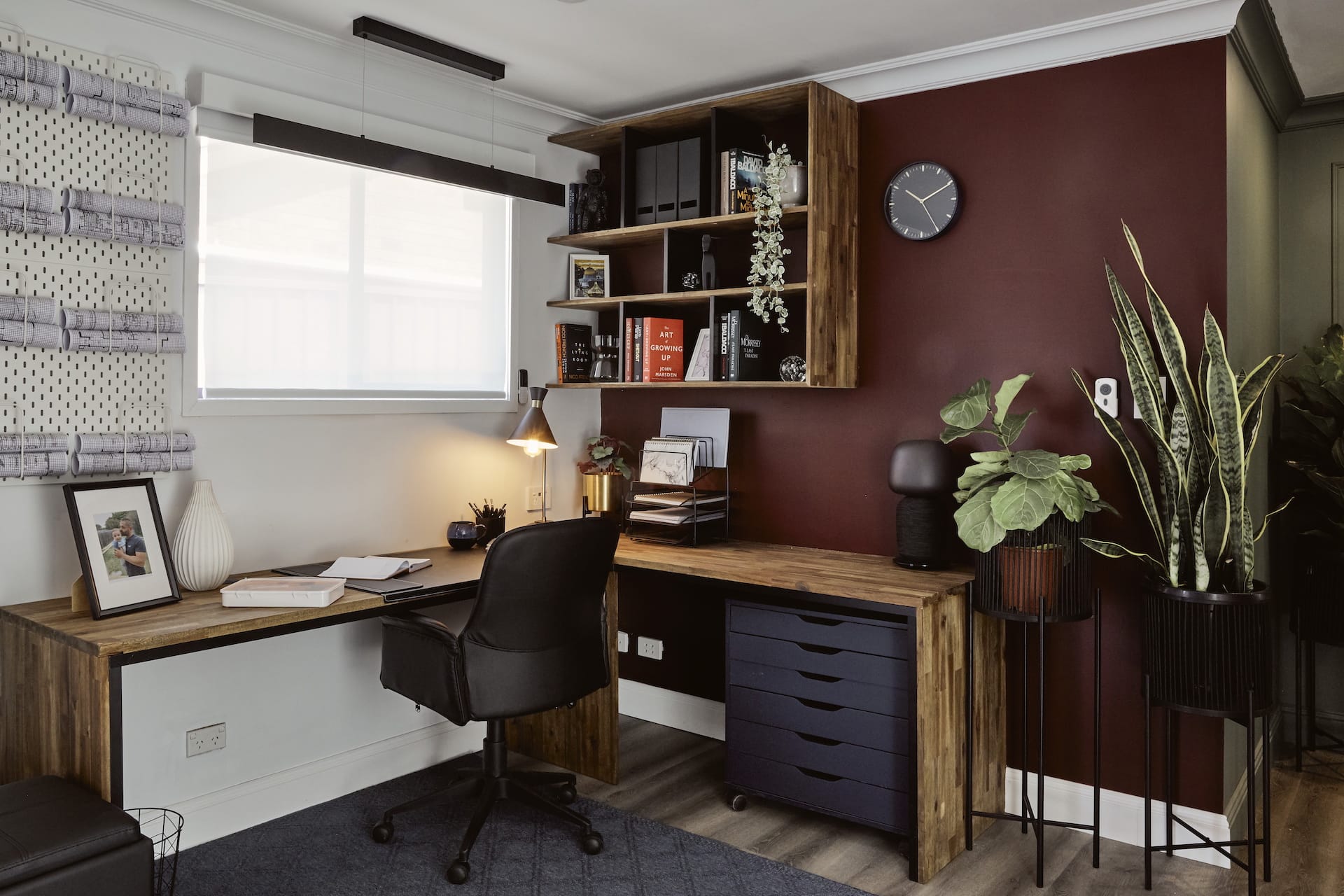 The Bad: Both Offices

The one above is definitely better than the one below, but both are a bit of an eyesore. The one above has everything but the kitchen sink thrown at it, while the one below is cold and barren (save for a few masculine cliches).

Neither space feels like the kind of zone you’d be inspired and productive in.

Let’s start with the one above. There’s just so much going on. The heavy corner desk with equally heavy shelving. The dated burgundy wall. The odd pendant light in front of the window, which is one of the most bizarre lighting choices I’ve seen on this show. It feels so thrown together. There’s no theme, there’s no cohesion. And the styling is way too much. There’s just nothing sophisticated about it.

Below, things are worse. Everything apart from the lamp on the desk is horrible. It’s dated, it’s heavy, it’s cold, it’s uninviting. There’s not even a nice piece of art above the desk. This room also has no style or theme, and the rug is completely out of place. 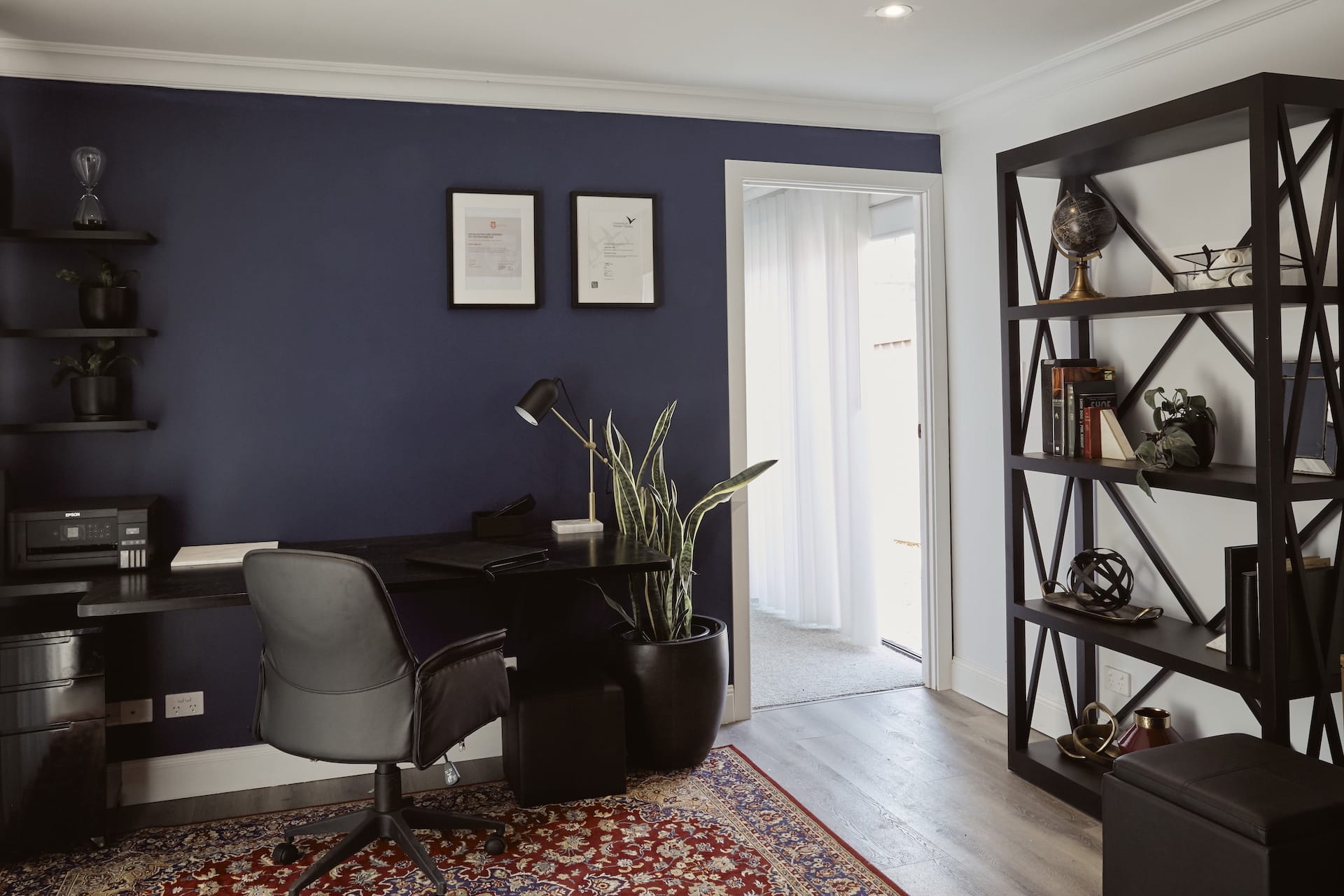 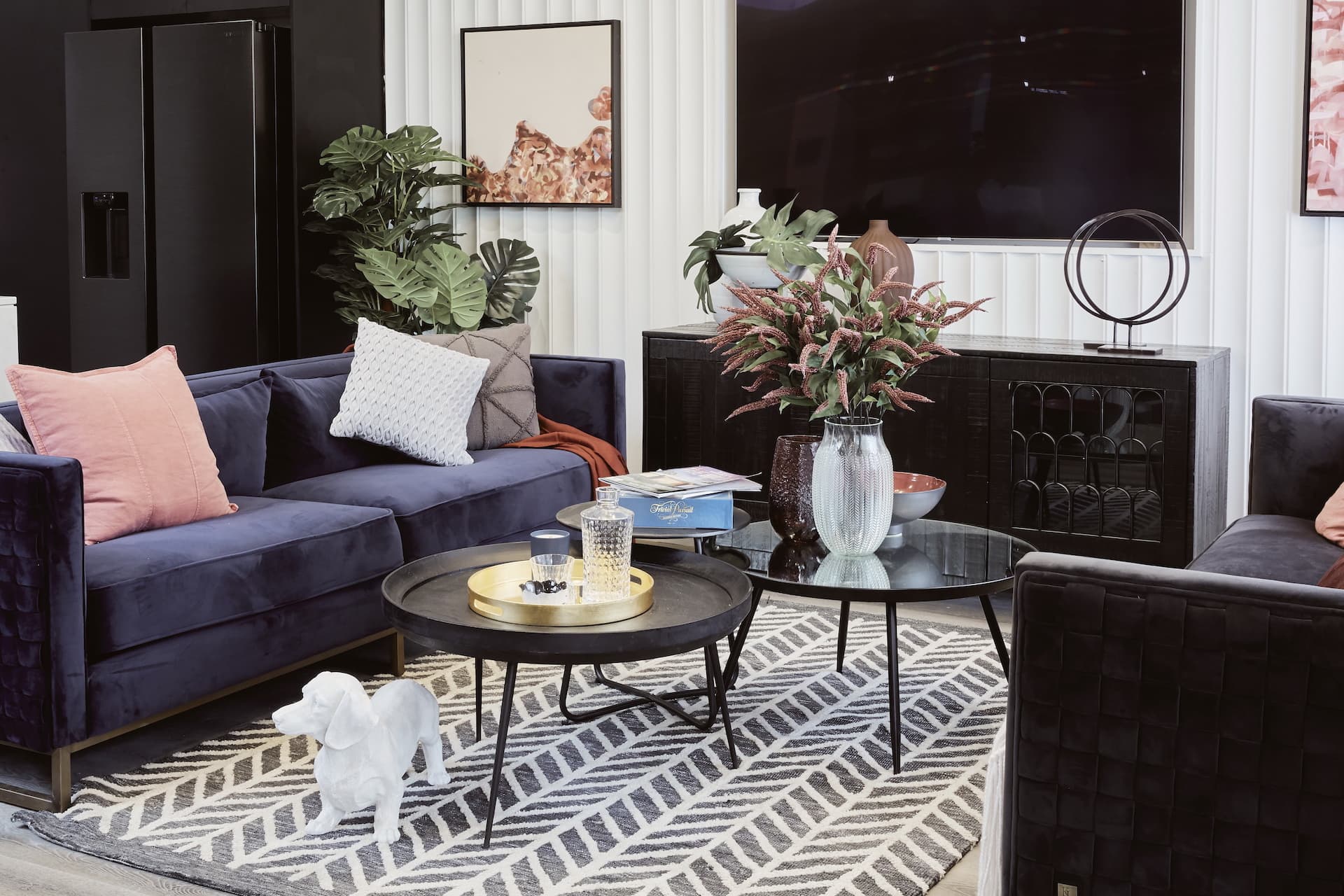 The Bad: The Impractical Living Room

The boys were delivered a formal lounge in this house (we’ll get to those design crimes shortly), so this living space was the one zone to chill and watch TV in. Sadly, you can’t do that. Not unless you want to turn your head so far that you require major spinal manipulation from a qualified physio afterwards.

I have no idea why a sectional sofa wasn’t chosen here; one that faces the TV in this room would have made sense. I also don’t know why the TV is mounted so high above a sideboard. You just can’t watch it at that height from the sofas that have been selected. As it stands, this is a formal sitting zone with a too-high TV in it and a whole lot of clutter.

The styling here is just out of control. It’s so full and mismatched and not at all thought out. And what is the white sausage dog statue doing here? I don’t know if that’s the worst decorative moment here or if it’s the Trivial Pursuit board game with magazines plonked on top. The medley of vases and bowls can’t go unnoticed either.

This one was a fail guys. 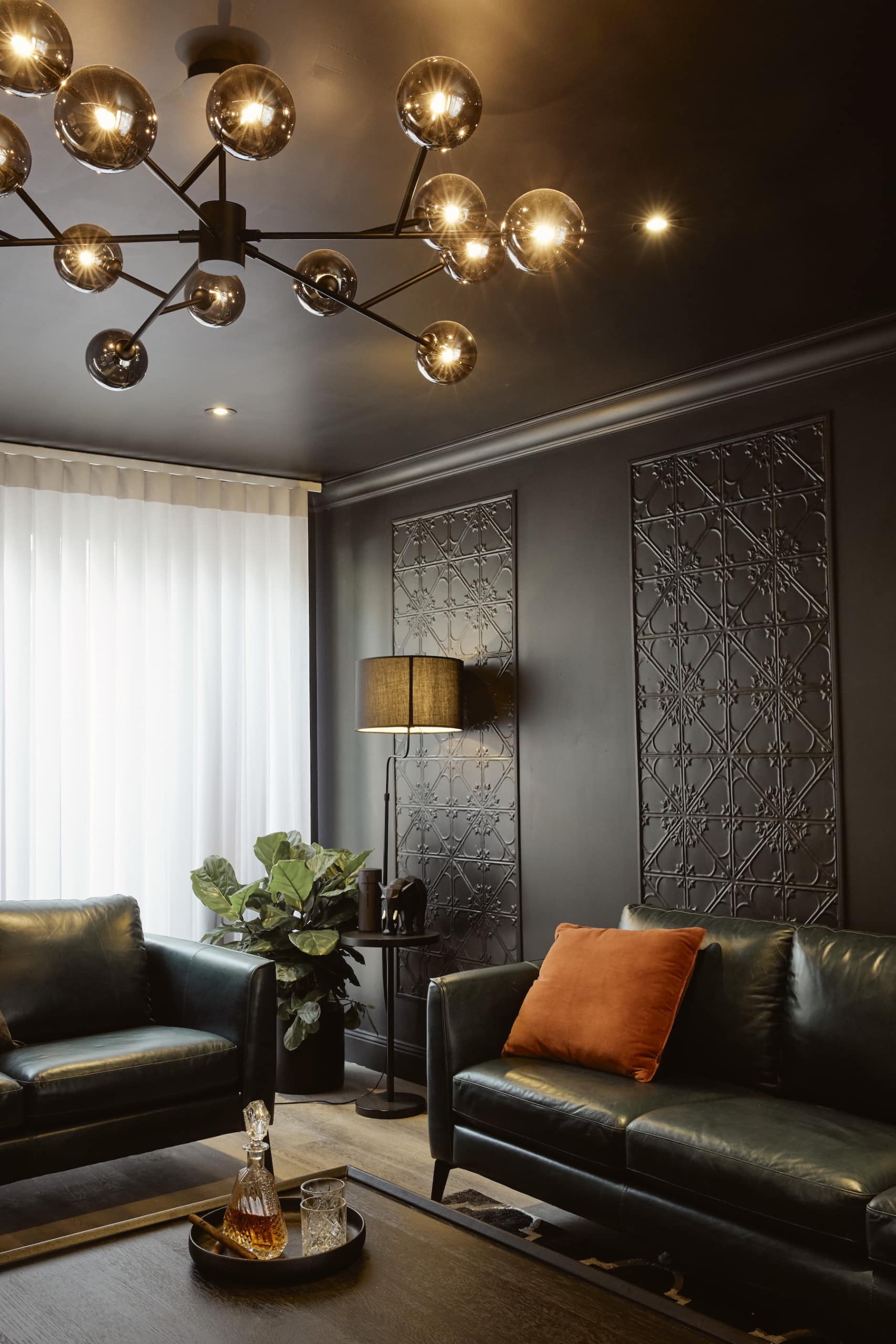 The Ugly: This Man Cave

I don’t know where to start here in assessing this cliched man cave turned whiskey bar. Oh, wait, yes I do: the pressed metal. I’ll go on the record as saying that pressed metal needs to stop being used indoors. Immediately. Especially in a modern home. The house rules were to use foundation colours, not materials from that era. This is a bizarre inclusion in the room, but it’s just one of many elements that don’t work.

Everything else in this space is so predictable. If you had of asked me what contestants on House Rules would create if they had to design a man cave I’d have said: black leather sofas, dark timbers, scotch, a cigar somewhere, an all-black space. It’s incredibly boring and brings no new ideas to the table.

It also feels way too old for young lads to enjoy. This is something a more mature man might like. 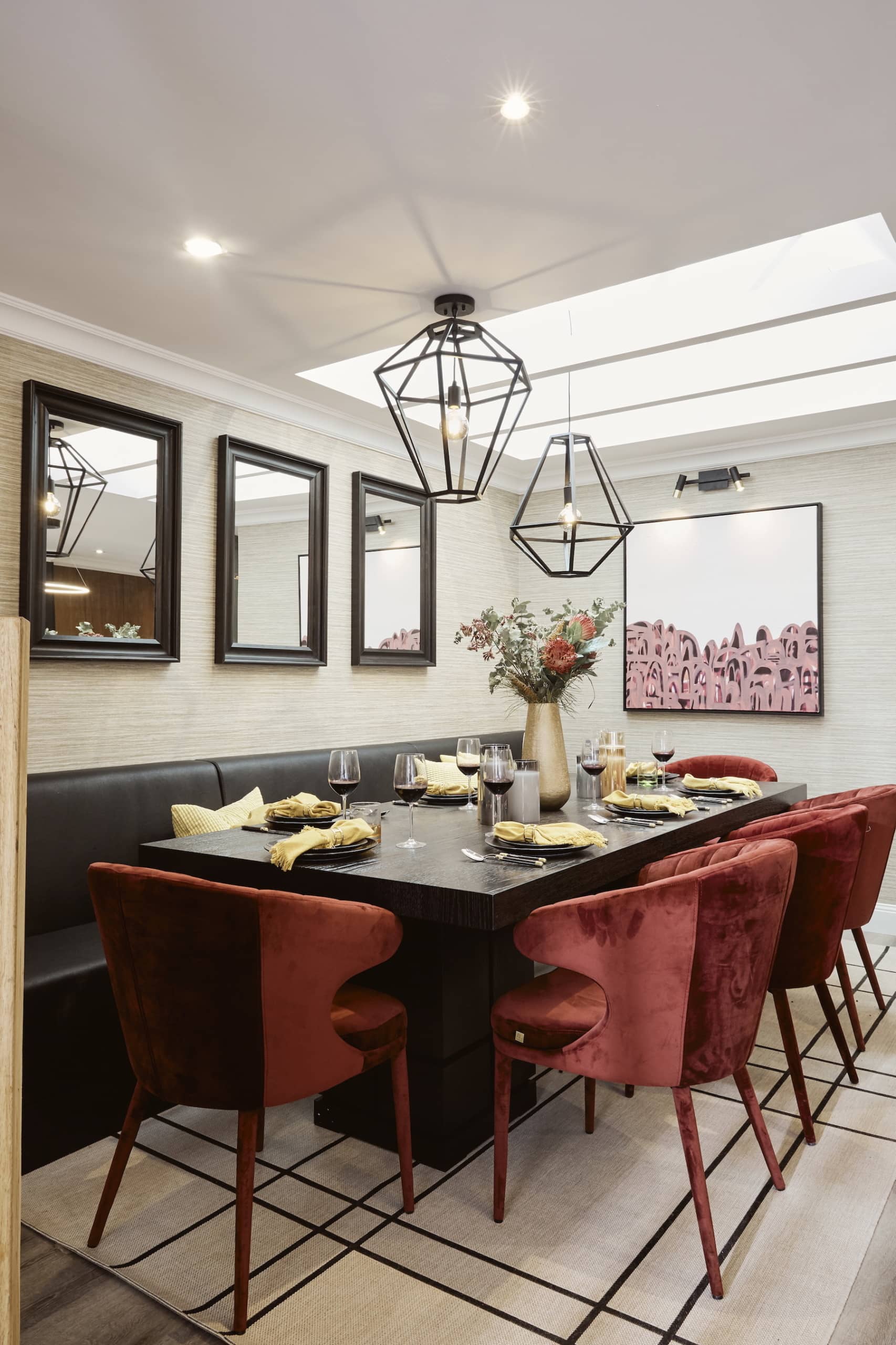 The Ugly: This Dining Room

This dining room reminds me of a VIP area in an RSL bistro. There’s something really dated and cheap about it. I think it’s the wallpaper paired with the three mirrors and leather banquette seating. It feels like it’s from another era. I’m having flashbacks of being served bag spaghetti bolognese at a restaurant that looked just like this.

PS if you need them, here are some divine banquette seating ideas for your dining room.

There’s also a big impracticality at play with the rug under the table. Not only is it too short on one end of the table (one of my don’t-break dining room rug rules), but the colour and style of rug aren’t right either.

Can you imagine the amount of spills and stains that are going to land on that rug? This is more high maintenance than me that one time my partner convinced me to go camping. It didn’t happen again, I can assure you.

Like with other rooms, there’s no theme at play. What were the contestants going for? It’s not glam, it’s not sophisticated, it’s not relaxed, it’s not modern or fun. It’s a mishmash of ideas. Like the members of Young Divas, they might be good individually, but together they just don’t work. 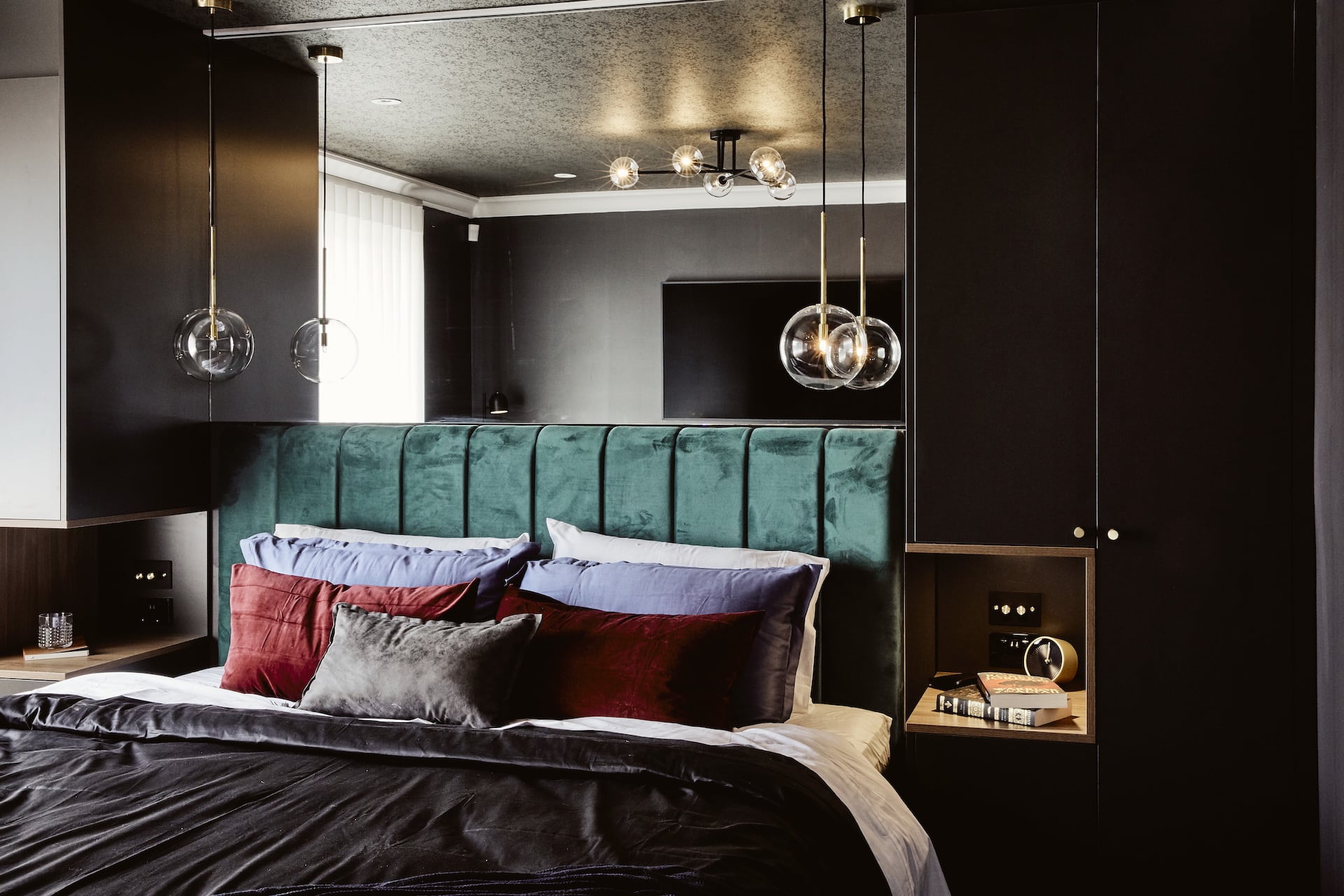 The Ugly: This Velvet Prison

There’s a crime against velvet being committed here and someone needs to be punished. This is a material you should use sparingly, but here they’ve taken the opposite approach. It’s in the headboard, the pillows, the cushion and the quilt cover. Or at least that looks like a velvet quilt cover. If this is a velvet quilt cover it must be burned immediately.

It’s not just the velvet overkill that lets down this room. It’s the fact that it feels so dark and overwhelming. No pieces have room to breath and the whole space feels very heavy. The bed is being smothered by cabinetry, and then pendant lights are stuffed in there, the ceiling is coloured in some dark speckled paint or wallpaper, and there’s a giant TV mounted on the opposite wall.

This has cheap hotel room written all over it. One that charges by the hour and where you have to bring your own towels.

What did you make of the House Rules 2020 Laith and George reveal? What were your winning and losing rooms? Drop a comment below and let me know.