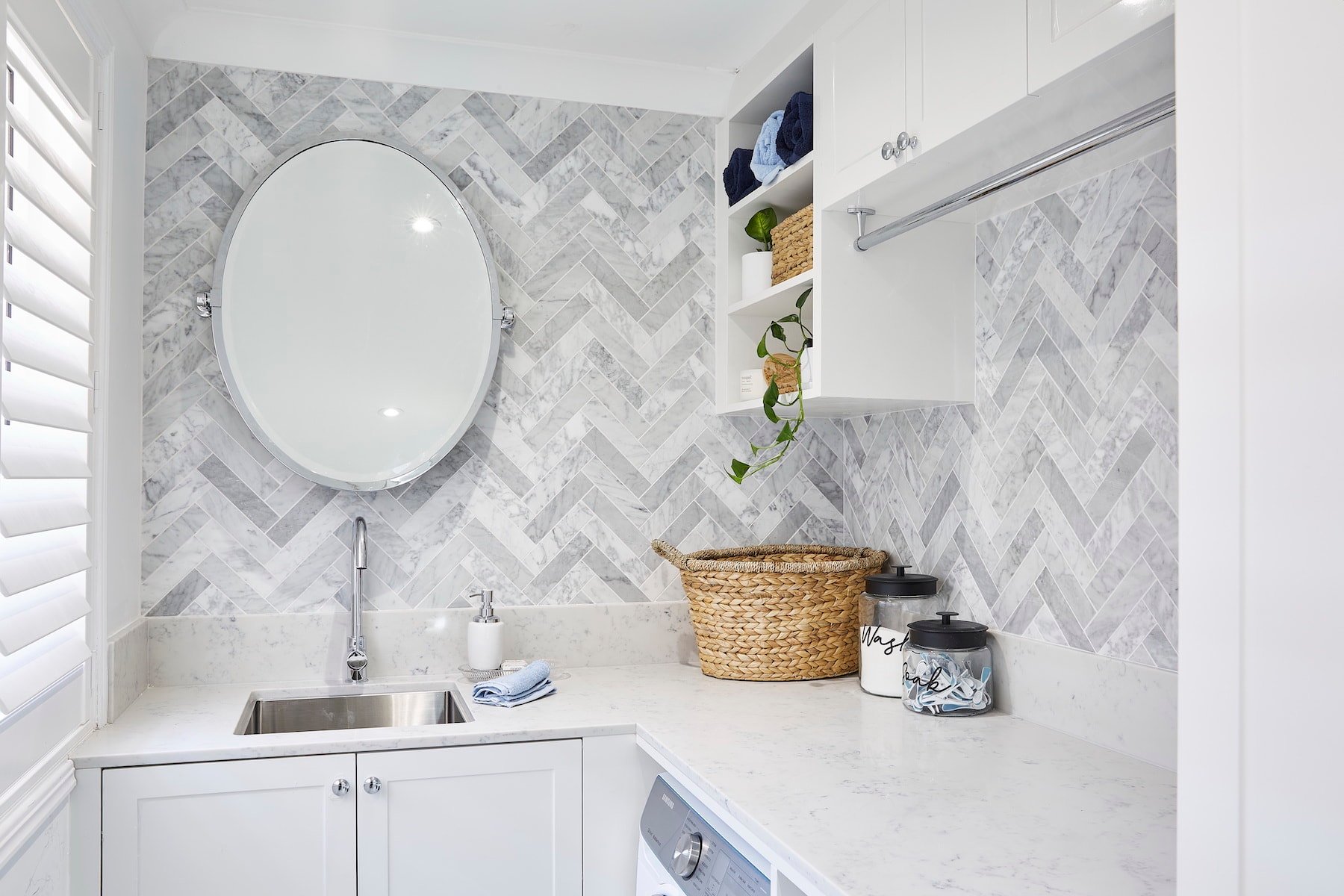 The House Rules 2020 Lenore reveal just went down, and I have to say they saved the best for last.

Almost every room in this home was a stunner. It’s left me more shocked than when Ginger left the Spice Girls. But this time I didn’t cry, which is something that may or may not have occurred when Geri left the group to pursue a solo career back in the late nineties. What can I say; I was young, it was a different time, and I didn’t get out a lot.

Hamptons design is undoubtably popular and has been executed a lot in homes over the years. I even did it in this recent interior design project. And as you’ve probably already realised, there are so many ways you can do Hamptons style. There’s the classic, the feminine, the luxe, the more coastal, and even that moodier more masculine version that’s become popular of late too.

The style revealed this week on House Rules in Lenore’s abode was a bit of a mix. It gave a nod to various coastal and Hamptons schemes without feeling overly themed.

Shall we take a closer look at each room from the House Rules 2020 Lenore reveal? I think we shall. The Kitchen was Utterly Delicious

Let’s start with one of my fave rooms in the reveal, which is this delicious Hamptons kitchen.

Firstly, talk functionality, because a kitchen if nothing else needs to be useable and work for you day-to-day.

I’m liking the fact that we have the triangle of travel between the sink, cooktop and fridge. It’s great to have this layout in a kitchen if you can make it work, and here they’ve done well to address it.

There’s also ample benchtop space, plenty of lighting, and power points galore. There even looks to be plenty of storage, so overall I’m very impressed.

From a looks perspective, I also have to commend them. That navy blue cabinetry is impactful without being too dominant. Dressing it with brass handles was a genius move, and I love that the tapware also picks up the brass tones. They chose to do the wall and over-fridge joinery in a lighter grey which was rather clever and stops the blue overpowering.

The stone benchtop is lovely, and I like that they took it up the splashback as opposed to installing a wild feature tile. It feels very clean and sophisticated. 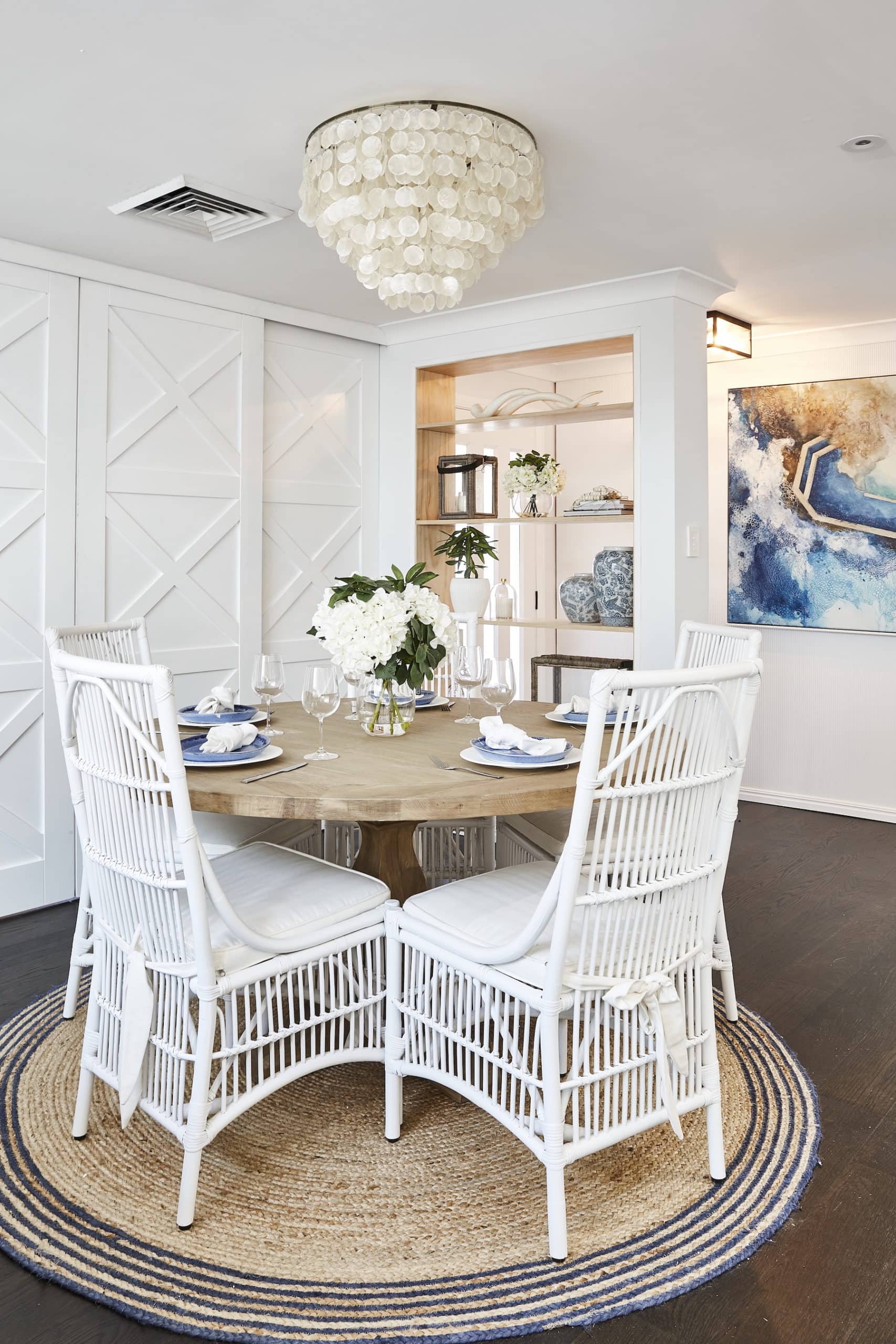 When you have impressive detail in the base materials of a room, you really don’t have to pack too much furniture and decor in to make it interesting.

Here, those white door panels give this entire zone a focal point. It’s subtle but really successful. If the sliding doors had of been a flat white it would have been boring. And if they attempted a bold colour here it would be too dominant. Instead, they struck a perfect balance.

I’m also really fond of the lighting choice over the table. It’s often hard to do lighting above a table and pendants above a bench when the kitchen and dining are so close together. But it does work here. It works because the dining room pendant is less dominant than the kitchen lights, and so it becomes the supporting player.

The table and chairs here are a lovely, not-too-cliched choice for a Hamptons dining room. But I would take out the rug. It’s too small and it does feel a little pedestrian for this area. 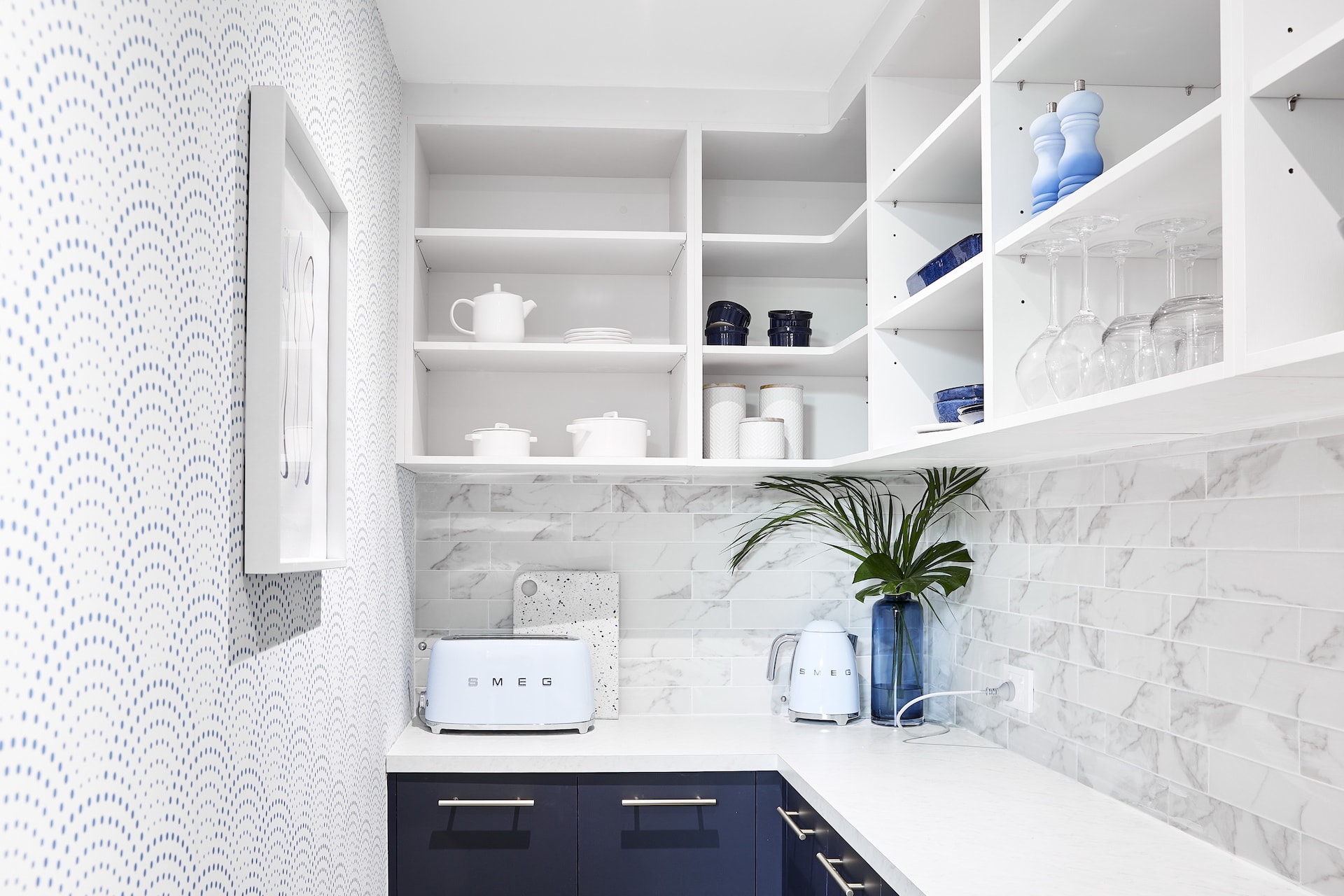 So we’ve gone a little wild with wallpaper in both the butler’s pantry above and the bedroom below.

Now, you know I love wallpaper. It’s the design element I’m constantly begging clients to let me install because it completely transforms a room. See what I mean in rooms from my CBD project.

Above in the butler’s pantry I know it seems wacky to do the feature wallpaper and then the feature tile. If it’s one thing you hear all the time (even from me) it’s the have one feature moment and let that be the star of the show in a space.

But for reasons I cannot fully explain, I don’t mind the double feature of wallpaper and tile here. It works for me. There’s such a medley of blues and white and greys in this zone that I feel at peace with all that pattern. Consider me surprised but delighted.

Below, I feel a little differently. Not about the wallpaper design, because I think the paper is stellar. It’s where they chose to apply it that has me confused.

I don’t feel there’s any scenario in which I would apply wallpaper in a bedroom and not put it behind the head of the bed. You’d either cover the entire room in paper and be unapologetic about it, or you’d do a feature wall of paper behind the headboard.

In this room, it just looks like they ran out of paper and couldn’t complete the room.

The bedding colour palette is gorgeous though and I’m happy with all of the furniture choices. The wall lighting feels a little out of place but I’m willing to forgive it. 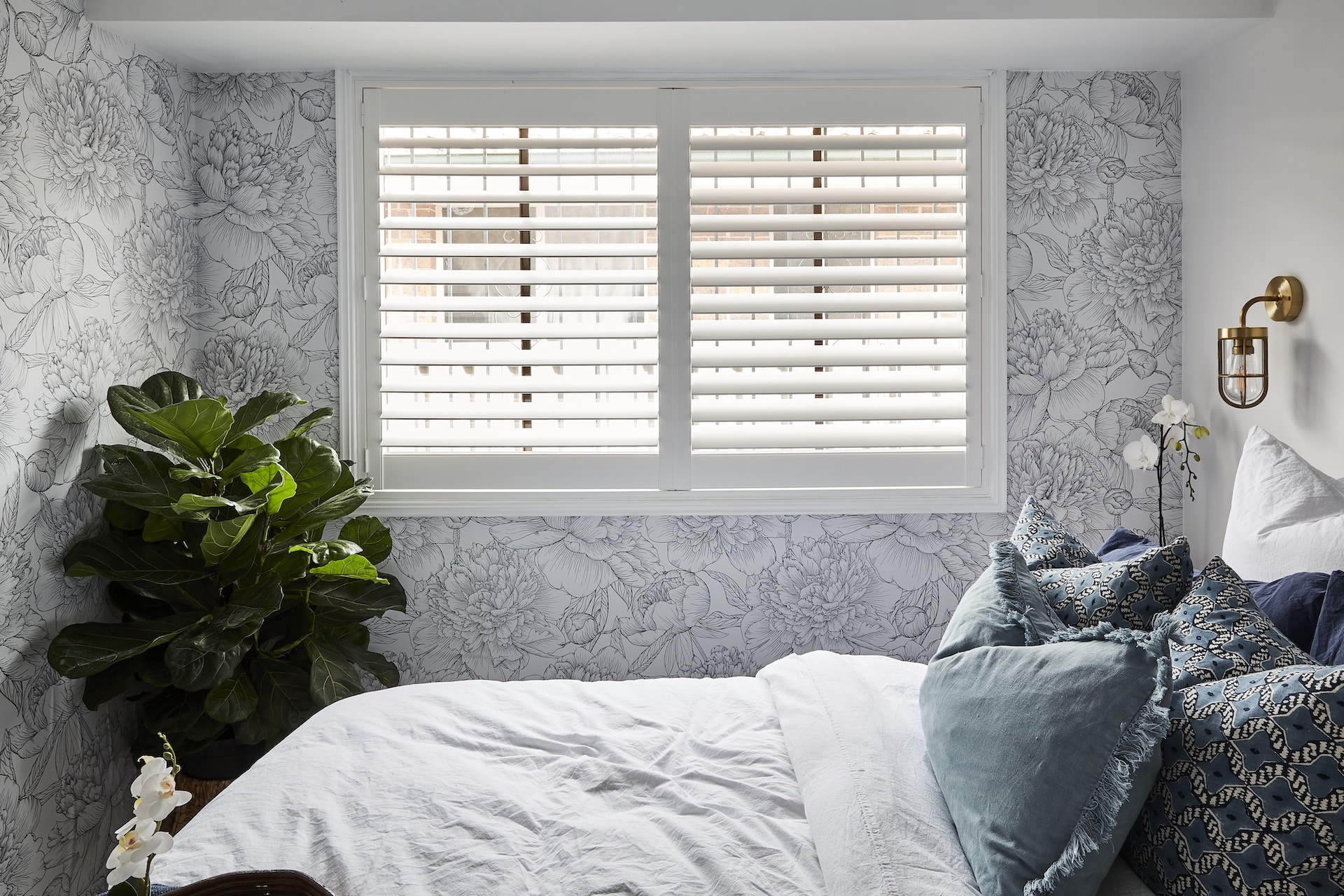 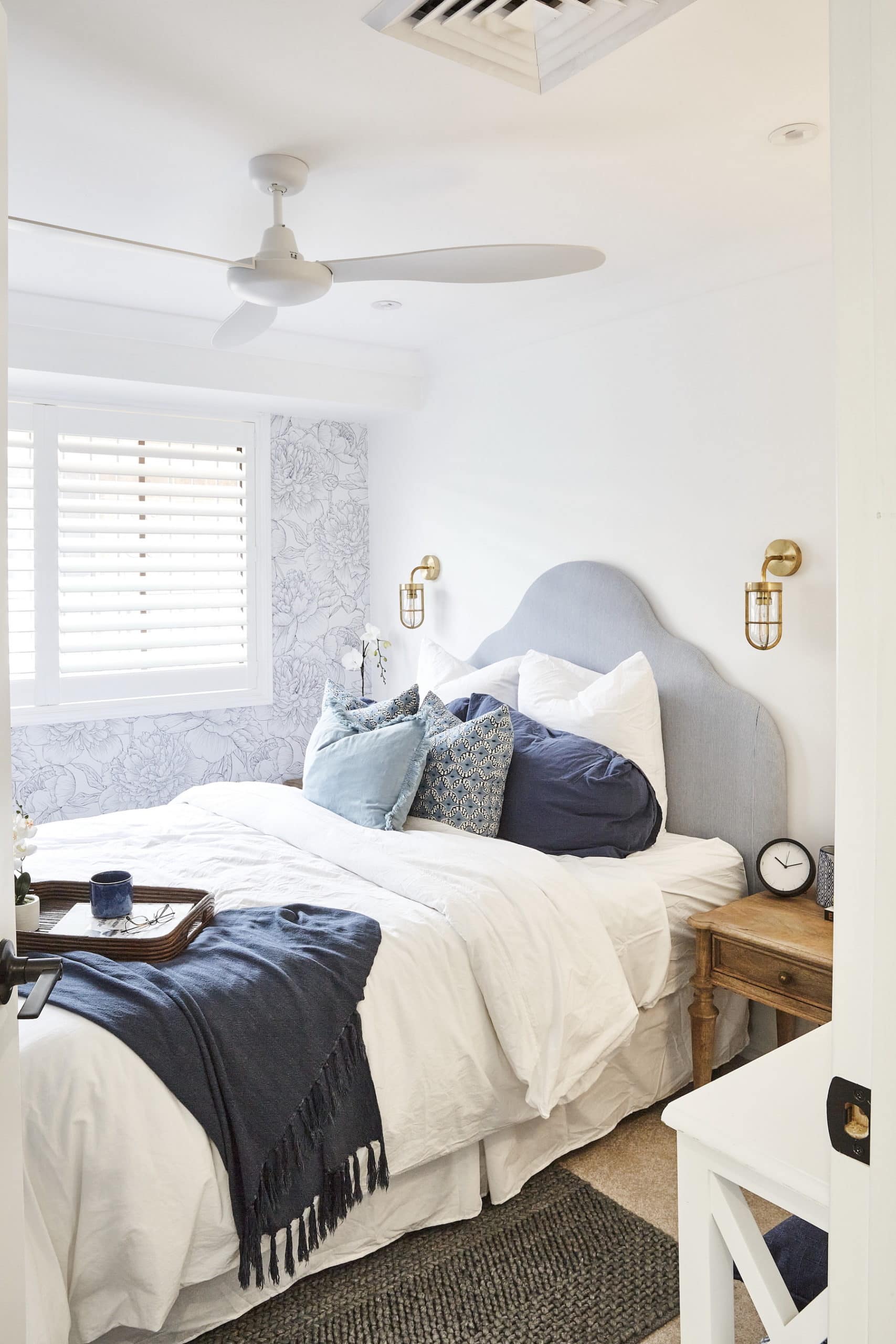 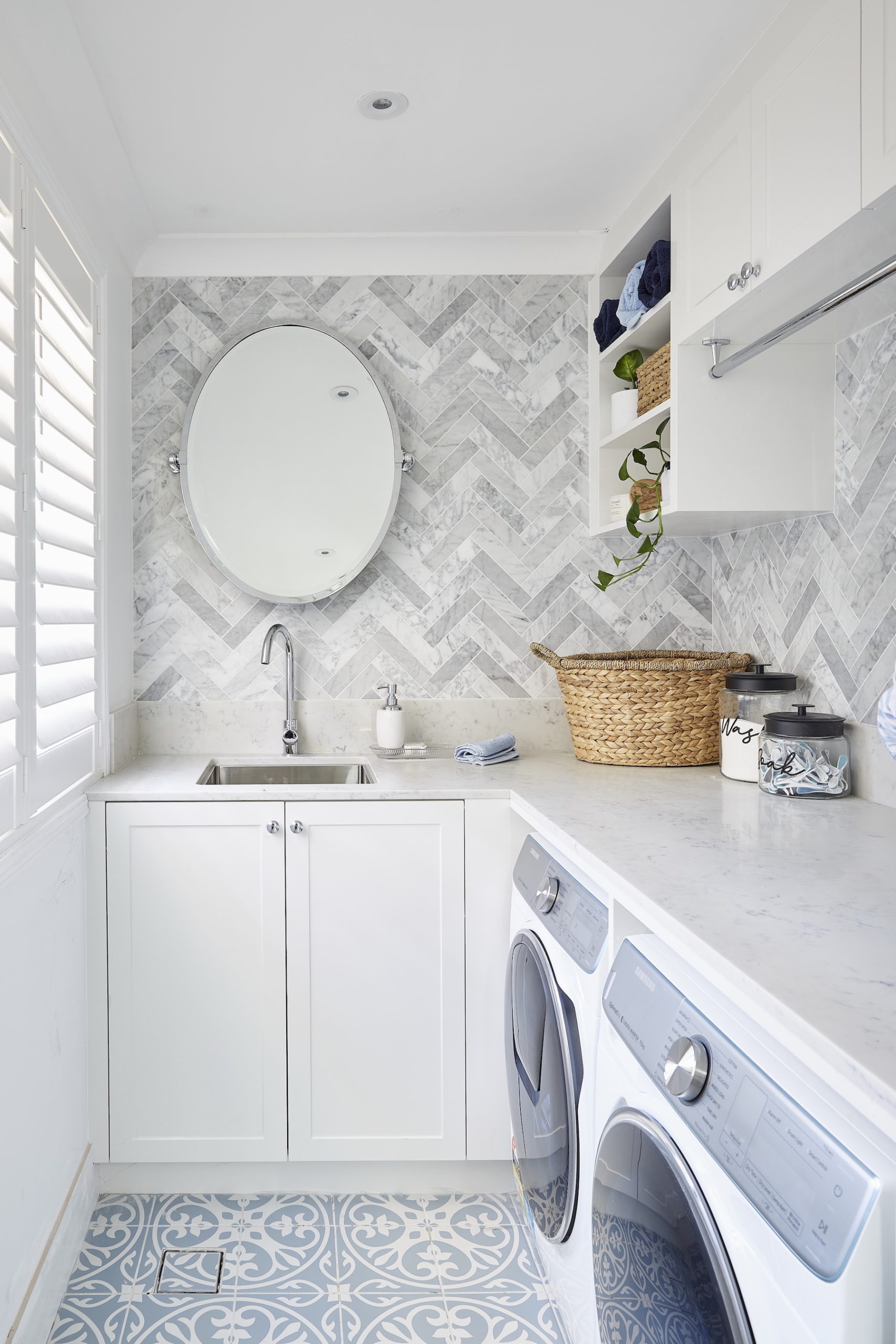 The Laundry & Bathroom: Beyond

The gasps just keep coming, because we enter the laundry and I’m once again as happy as a pig in you-know-what.

The marble herringbone tile: heaven. The dazzling floor tiles: glorious. The plantation shutters: joy and rapture. And then the finishing touches: wondrous. There’s nothing I would change about this laundry. It’s beautiful in so many ways.

In the bathroom below, things are also rather stunning. Love the hexagonal feature tile, love the brass tapware, and love the floating vanity.

The colour palette here connects this space to the kitchen stylistically, so there’s a wonderful sense of design cohesion.

Putting the bench seat in the shower is genius too. It’s actually one of the many ways to future proof your bathroom, so they get huge points here from a longevity perspective. It adds a sense of indulgence and luxury and I am here for it.

The one thing I do look at and think I’d possibly amend in this bathroom is the oval mirrors. I know, they’re a huge bathroom trend. But One large rectangle panel of mirror would have looked better here. That wall feels a little unresolved to me.

Outside of that mirror issue though, I adore this space. 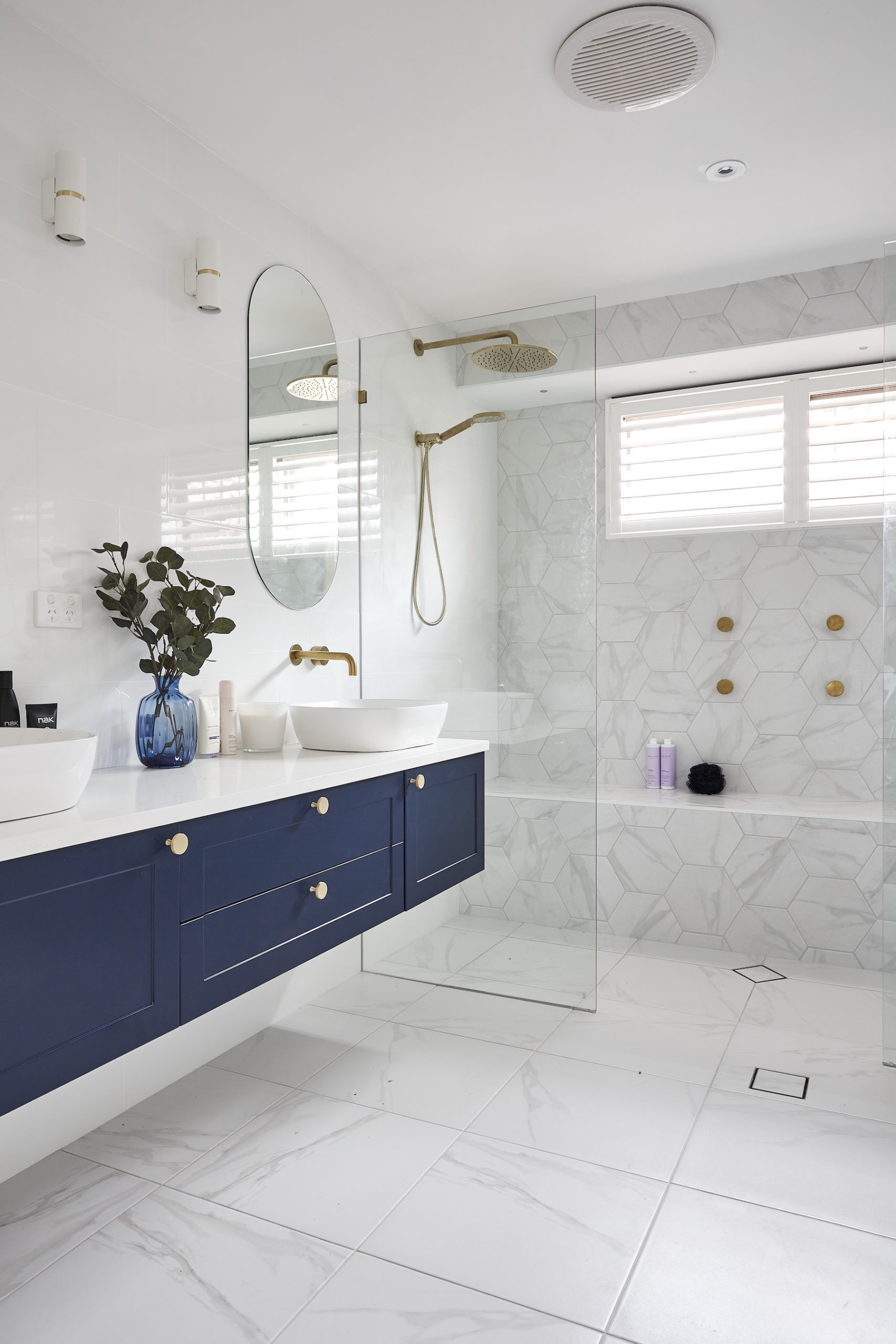 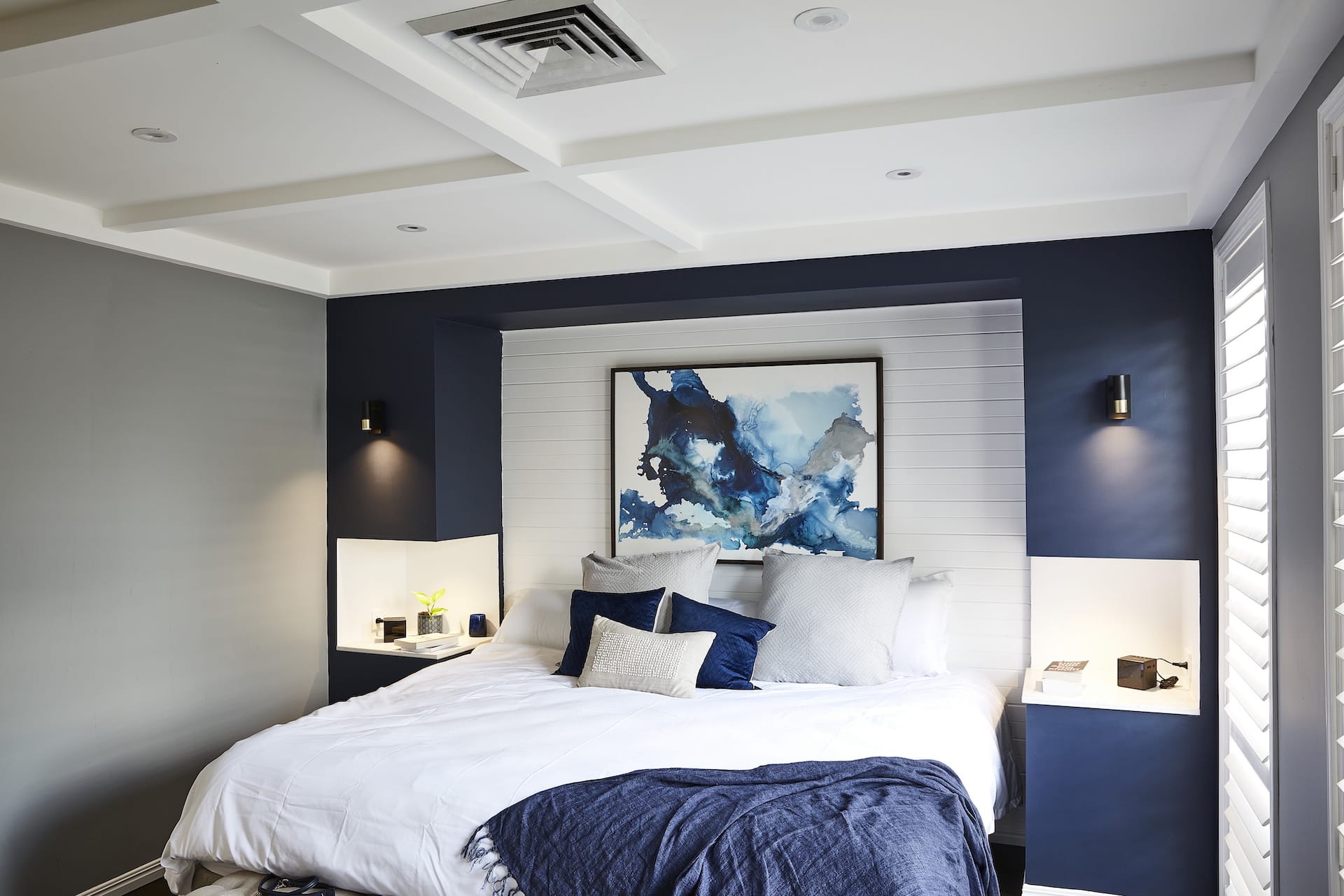 Now, don’t get me wrong; these spaces aren’t absolute crimes against design. I just feel they’re not as successful as the other rooms in the home.

The main element I take issue with in the bedroom above is the built-in nooks replacing bedside. I just hate them. I generally take issue with things like this because bedside tables already exist and there are some pretty phenomenal ones out there. Don’t try and replace a bedside table with a plaster niche containing no storage.

It’s like sofas with built-in side tables in the arms: I just can’t. We don’t need two-in-one furniture any more than we need two-in-one shampoo and conditioner. Let’s keep these things separate. They complement one another. There’s no need to morph them into one thing. But I digress.

The bedroom above is also way too hard and cold. There’s no warmth and cosiness because it’s just dark blue and white. They needed some soft beige or grey to break up all the high contrast colour.

In the room below, I enjoy the left side of the image but not the right. Though, seriously, Toohey’s New in the wine fridge? I don’t even need to go into how wrong that is. 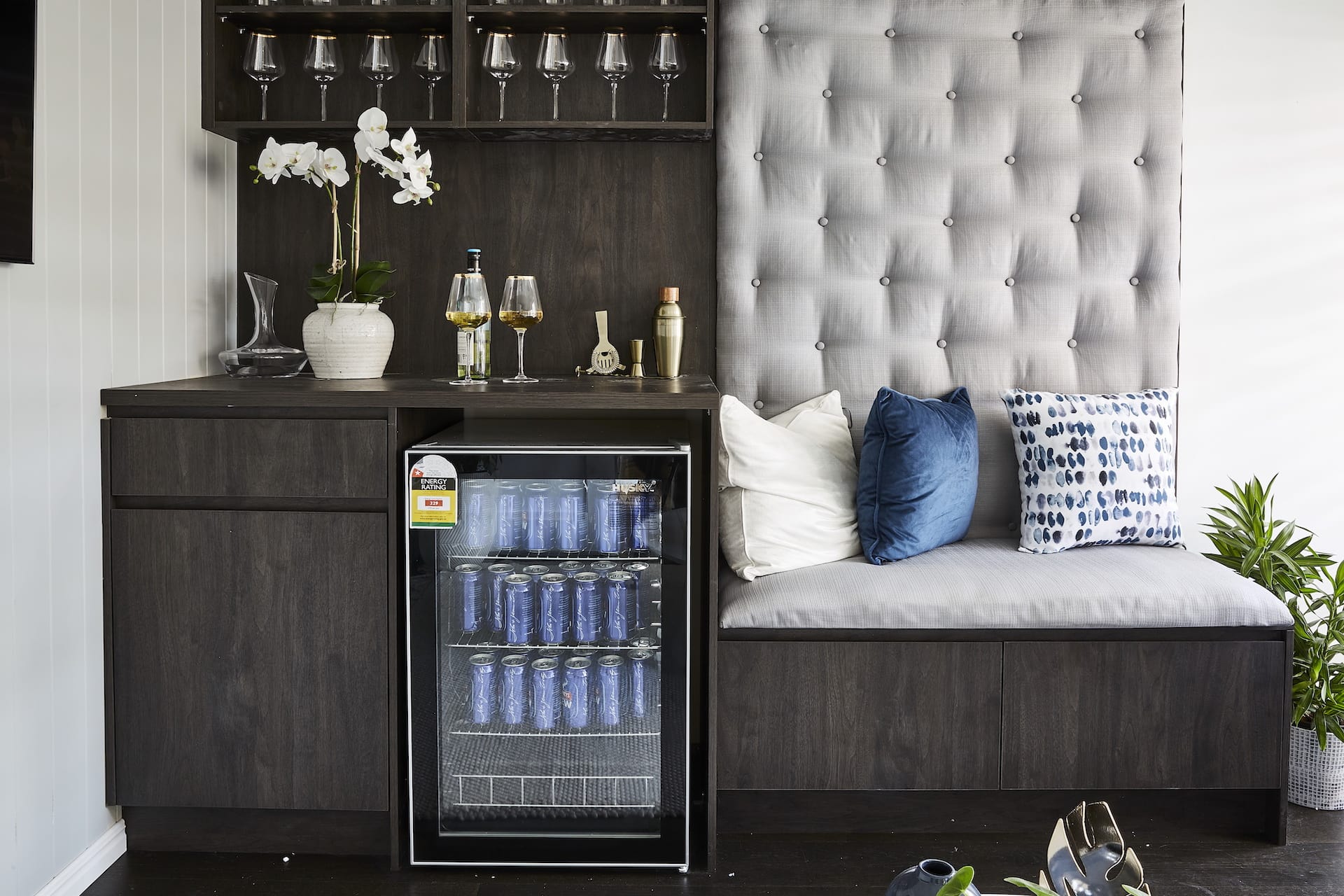 What did you Make of Lenore’s Reveal?

What did you think of the House Rules 2020 Lenore reveal? Were you as impressed as I was or does your design eye spot some major mistakes that needed addressing? Drop me a comment below and share your thoughts. You know I’d love to hear from you.

Want to see more from the House Rules 2020 Lenore reveal? Click here to see clips from the show. 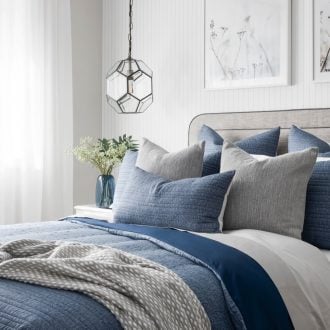 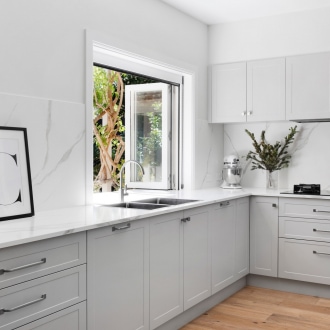 Before Meets After: Practical Kitchen Reno Tips from a Stunning Melbourne Makeover