Inside the House Rules 2018 Josh and Brandon Reveal

I’m not gonna lie; when I heard that the House Rules 2018 Josh and Brandon reveal was this week, I was afraid. Knowing that there was a lads pad being unleashed on us, I suspected all the worst design cliches were going to be showcased.

I had visions of car paraphernalia, rock and roll moments, pub vibes and the outback; all being abused in every way possible. And as you’ll see in this post, my worst fears were realised.

This is hands-down the worst home of the series so far, and it mirrors the man pads revealed in previous seasons. Almost every room was a fail of the worst kind – save for the kitchen and dining room – and they’d be wise to just gut the place and start again.

Let’s take a further look at the House Rules 2018 Josh and Brandon reveal. If you can stand to.

Oh and if you want to see some inspo on creating a legit man cave, this post has you covered. 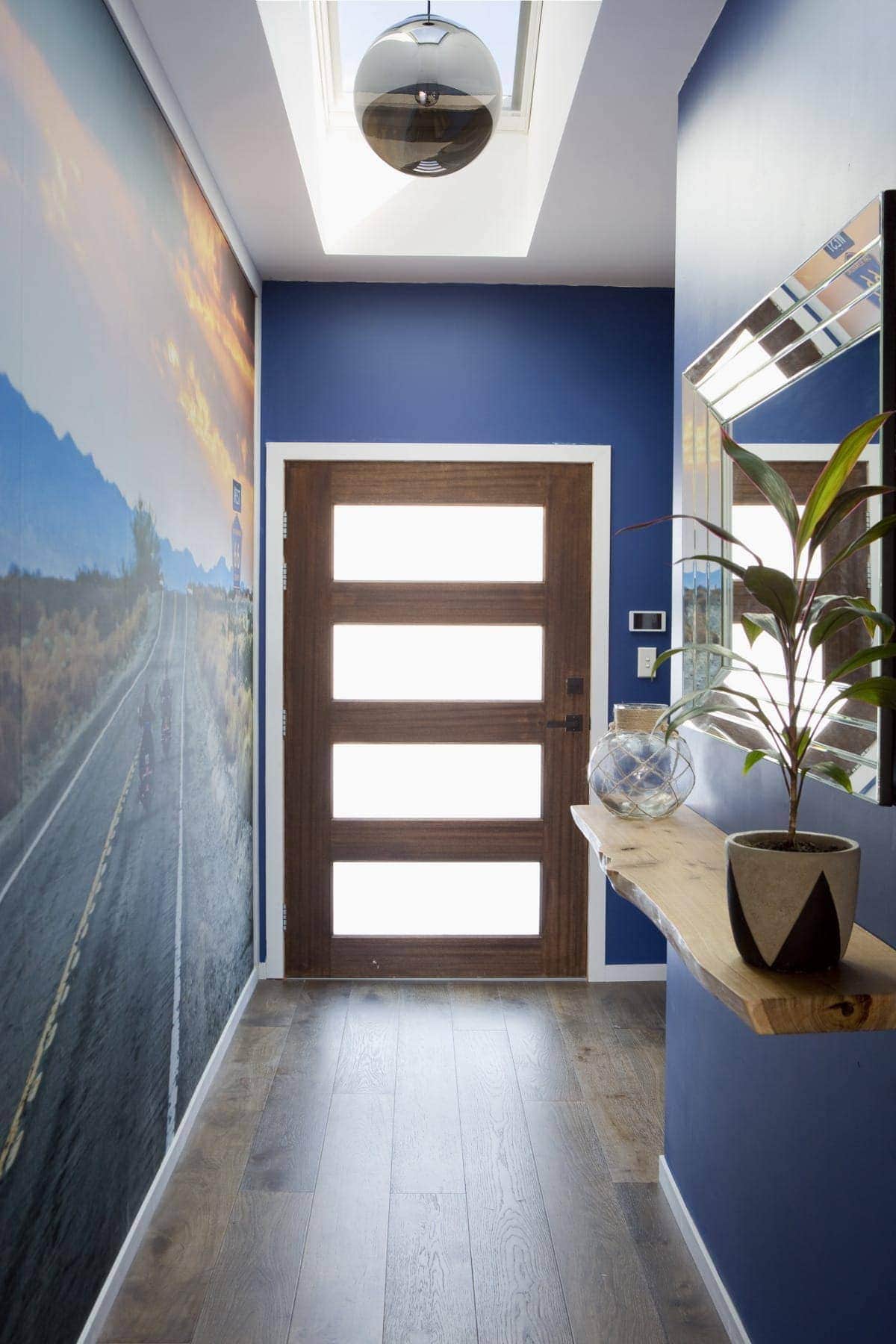 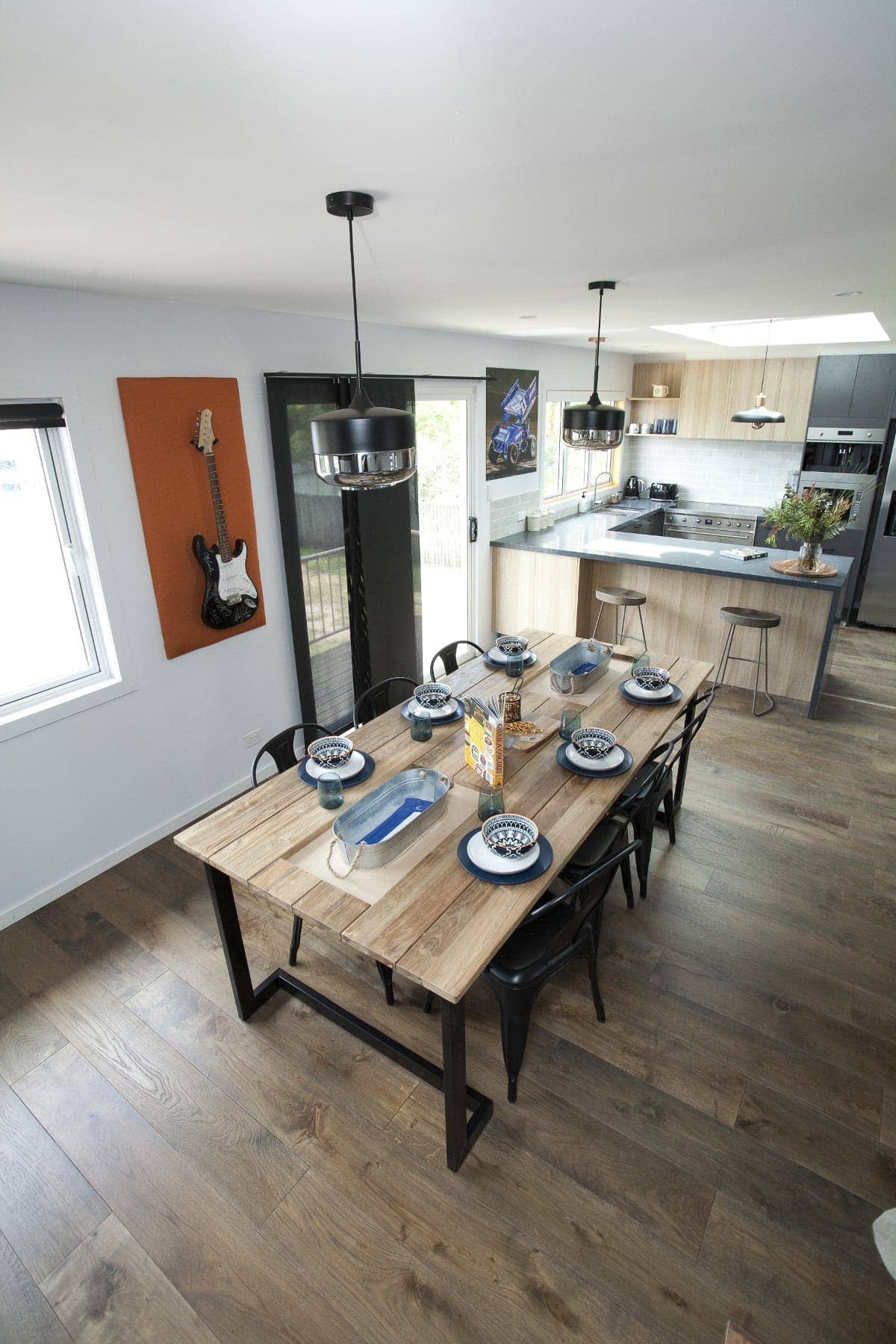 There’s simply no better way to make a great first impression than in a home’s entry. Sadly, Jess and Jared utilised this week’s sponsor (allegedly); whoever makes hideous wall decals depicting bikers on the open road.

I don’t know what possessed them to use this. I can only imagine they were encouraged to do so. Nobody wants to see this the moment they walk in the door. The blue paint they used on the opposite wall is the colour of a primary school uniform. It’s a juvenile shade and it needs to be remedied.

I’ve posted on creating a gorgeous entry before here. J&J could have used some of these tips.

In the dining room, thankfully things improved. Although not a lot of design was carried out here. It’s a sad state of affairs when you start giving teams kudos simply because they didn’t absolutely ruin a room. LLB was underwhelmed by the room, but come on LLB; at least it’s not an abomination!

The rustic industrial vibes were nice in this space. The table and chairs were lovely and at least the setting was to scale in the room. The pendants were gorgeous too.

The guitar on the wall needs to go immediately though. That I cannot stomach. 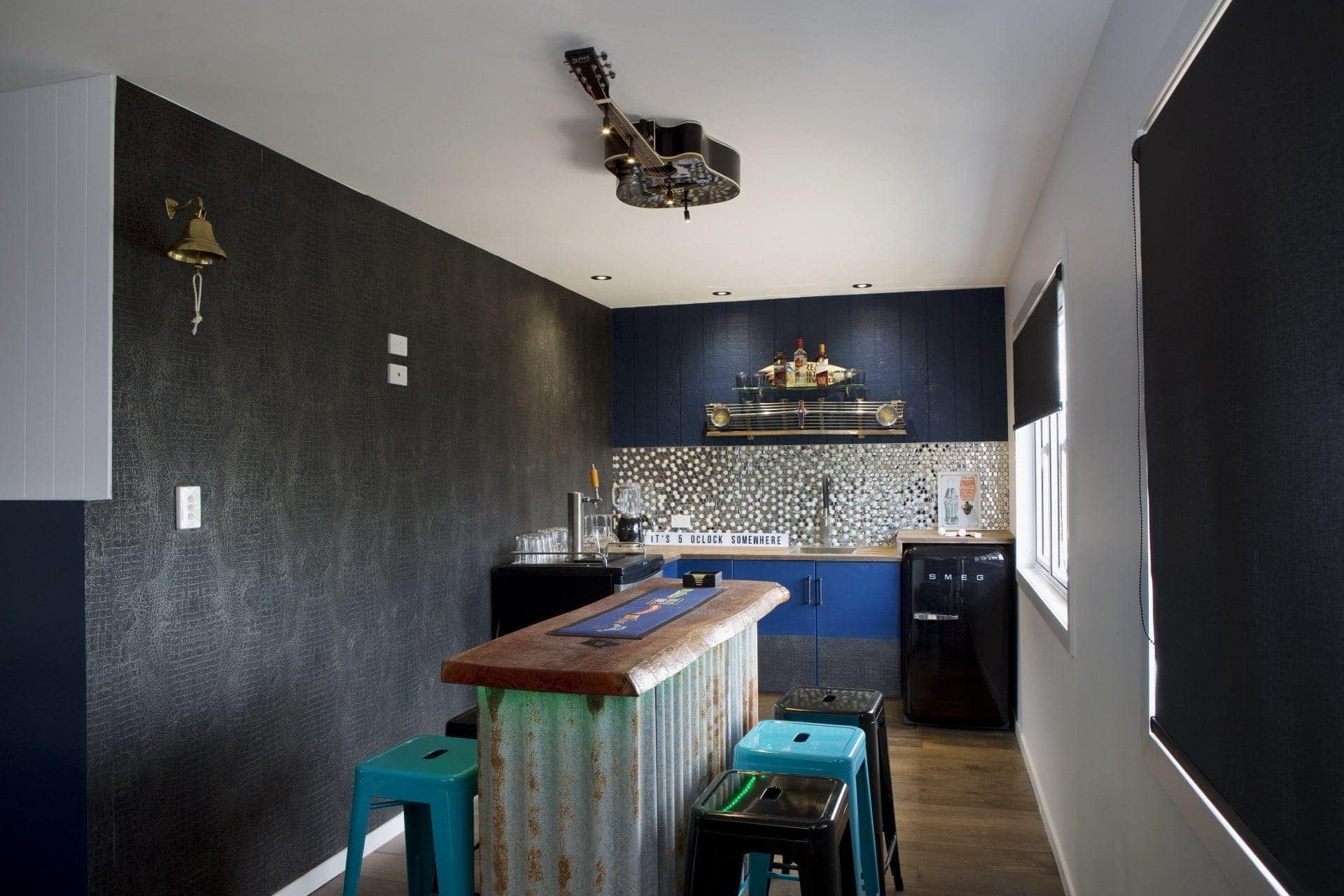 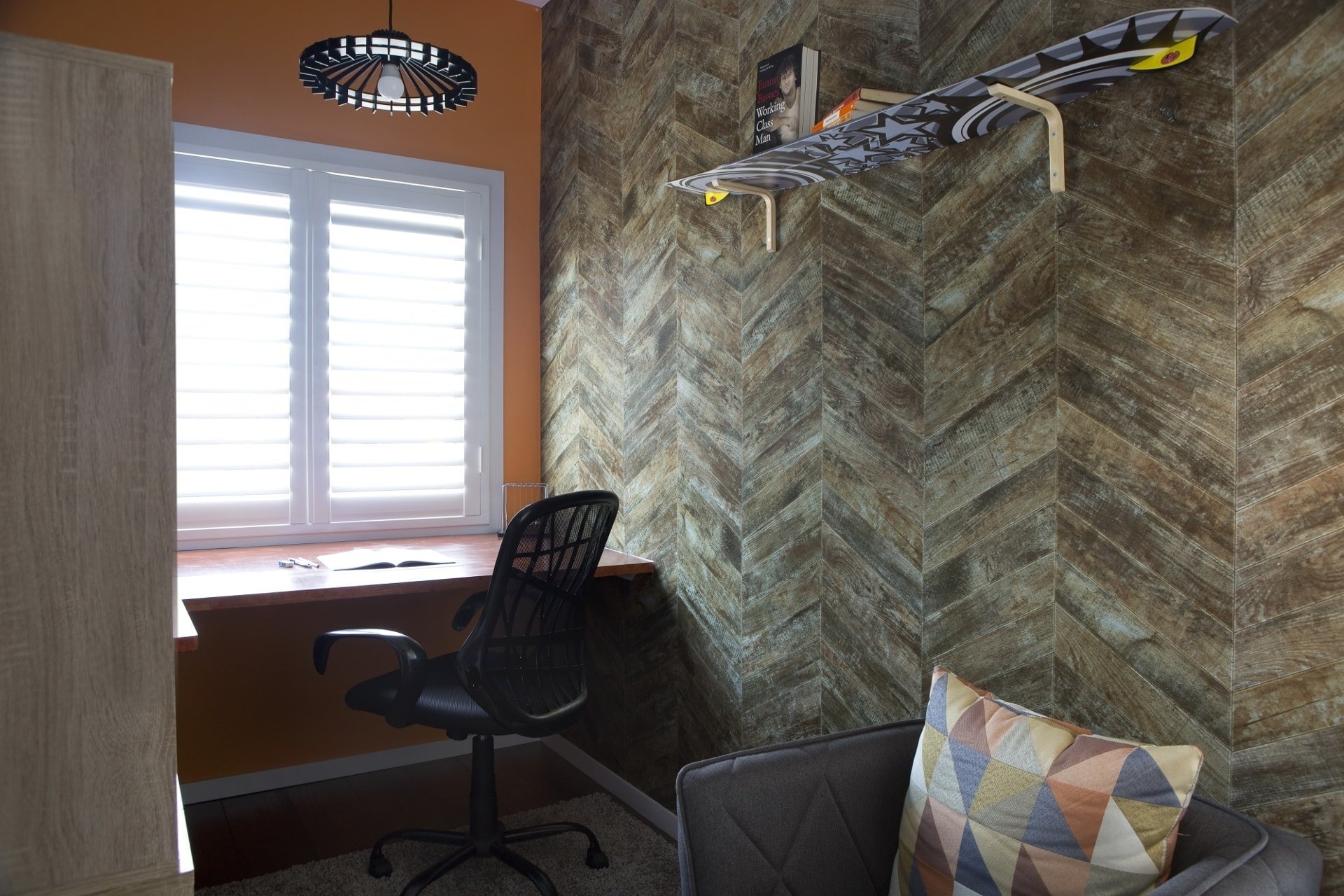 A man bar in a home is never executed well in shows of this kind. I suspected it was going to be horrible and it was. Toadfish and Mandy took a small space and made it feel even smaller by using dark patterned wallpaper. Then they sprawled the cabinetry with that hideous blue paint.

If that wasn’t bad enough, they then thought a guitar on the roof would add some pizazz to the room. Whose going to break the bad news to them that they thought wrong? I’m honestly trying to find a redeeming factor in this room but I can’t locate it.

I mean, seriously, there’s a bell on the wall. This whole home is becoming more and more cliched as we go along. I’m almost suspecting to se a mechanical bull in one of the rooms. Yeehaw!

In the study, the ugly blue tones continued. Except this time they were joined by a gross orange paint and spread across two walls. If that colour combination wasn’t bad enough, Toadfish and Mandy then covered the third wall in wallpaper that did everything to make the already tight space feel more cramped.

I can barely go on. 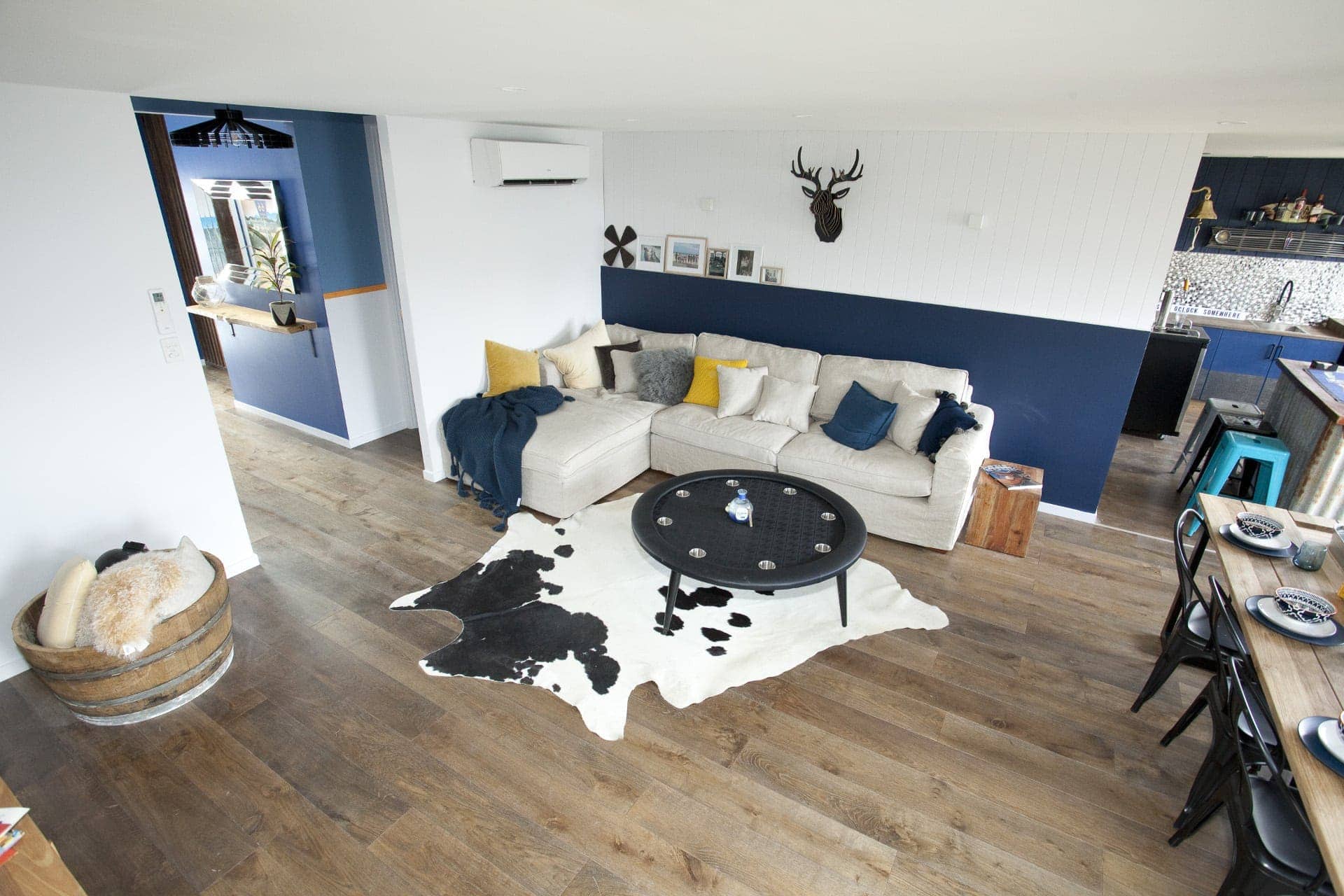 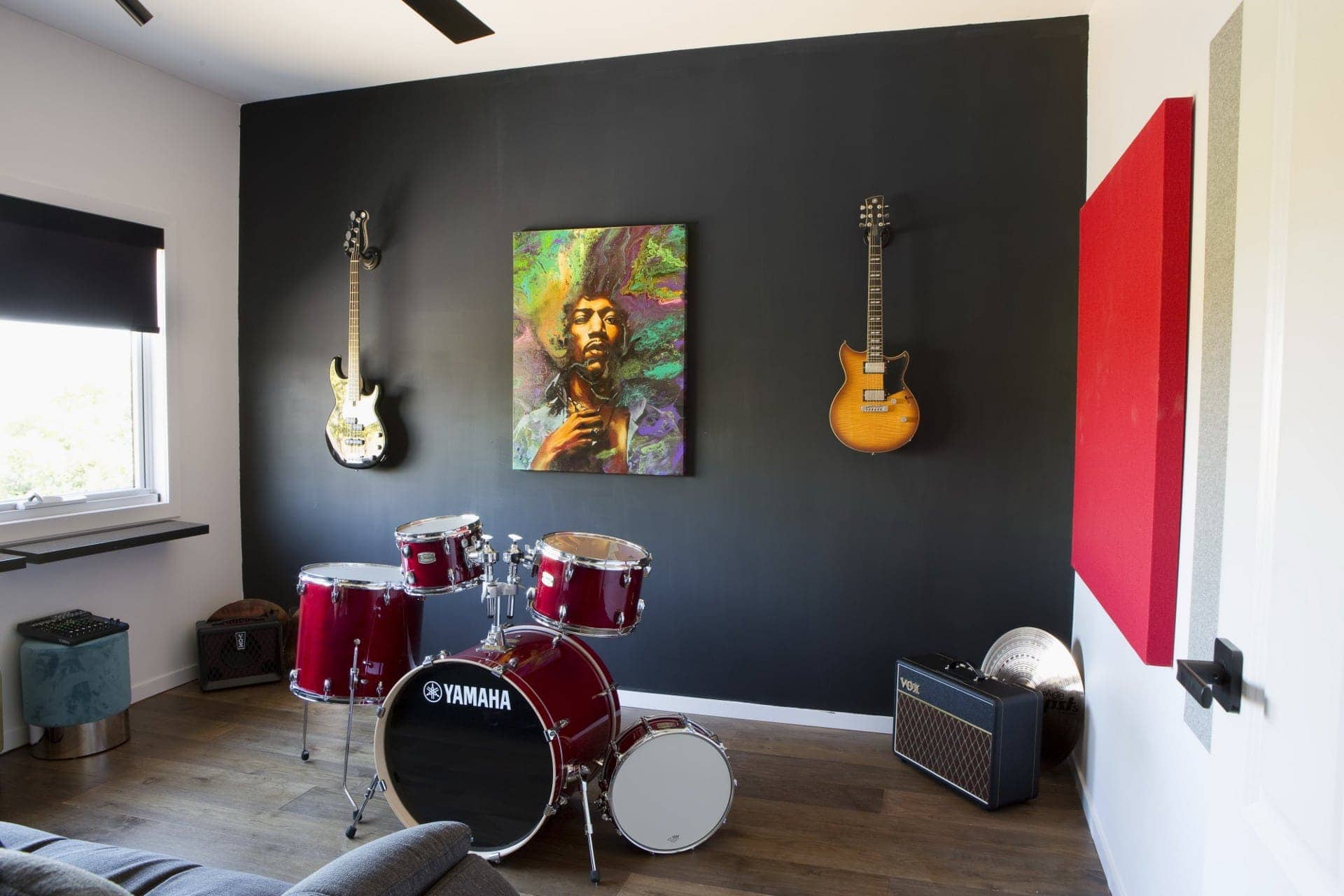 There’s nothing quite like a stag head on a wall to tell you you’re in an early 2000’s man cave. Except we’re in 2018, so this lounge room from Mel and Dave is incredibly dated and quite tacky.

You know I’m all for you doing you at home and displaying what you love. But for real, if you have a stag head figurine on your wall it needs to come down immediately.

Drew thought they lounge room looked like a corridor with furniture stuck on either side of the wall, and he’s 100% right. The spatial planning here is terrible. The sofa is too small for the space and it’s wedged right into the corner. It looks like Supernanny Jo Frost sat it in the naughty spot to think about its bad behaviour.

That coffee table is the most diabolical piece of furniture I’ve ever seen. If you can call it furniture. I’m quite happy to call the supplier on behalf of everyone in Australia and ask them to cease the sale of this thing immediately if not sooner.

I want to say something nice about this space because I’ve been so brutal on the teams so far. So let me say this: the colour palette of the blue, white and yellow is quite nice. It just feels more coastal, which is out of keeping with the rest of the home. 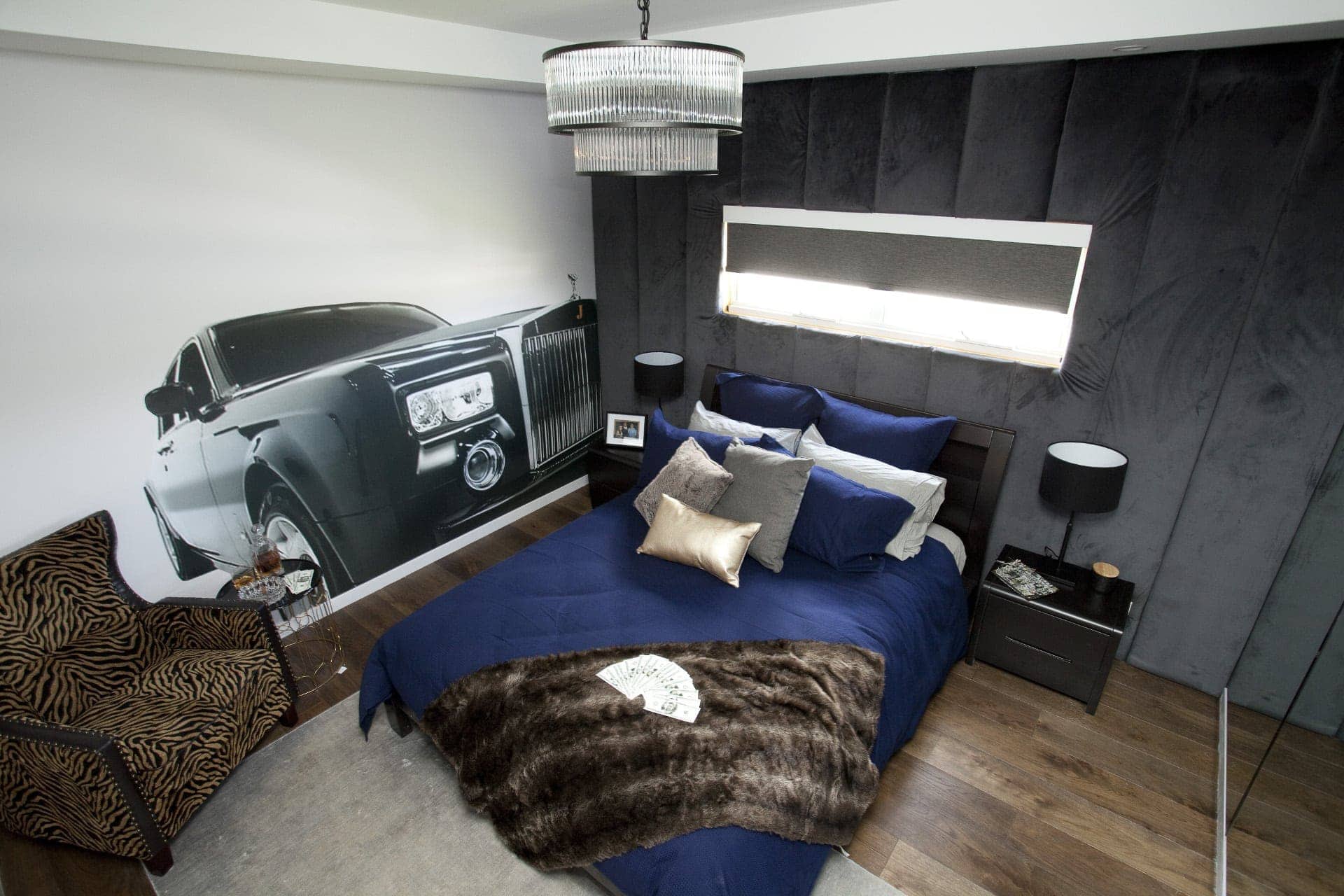 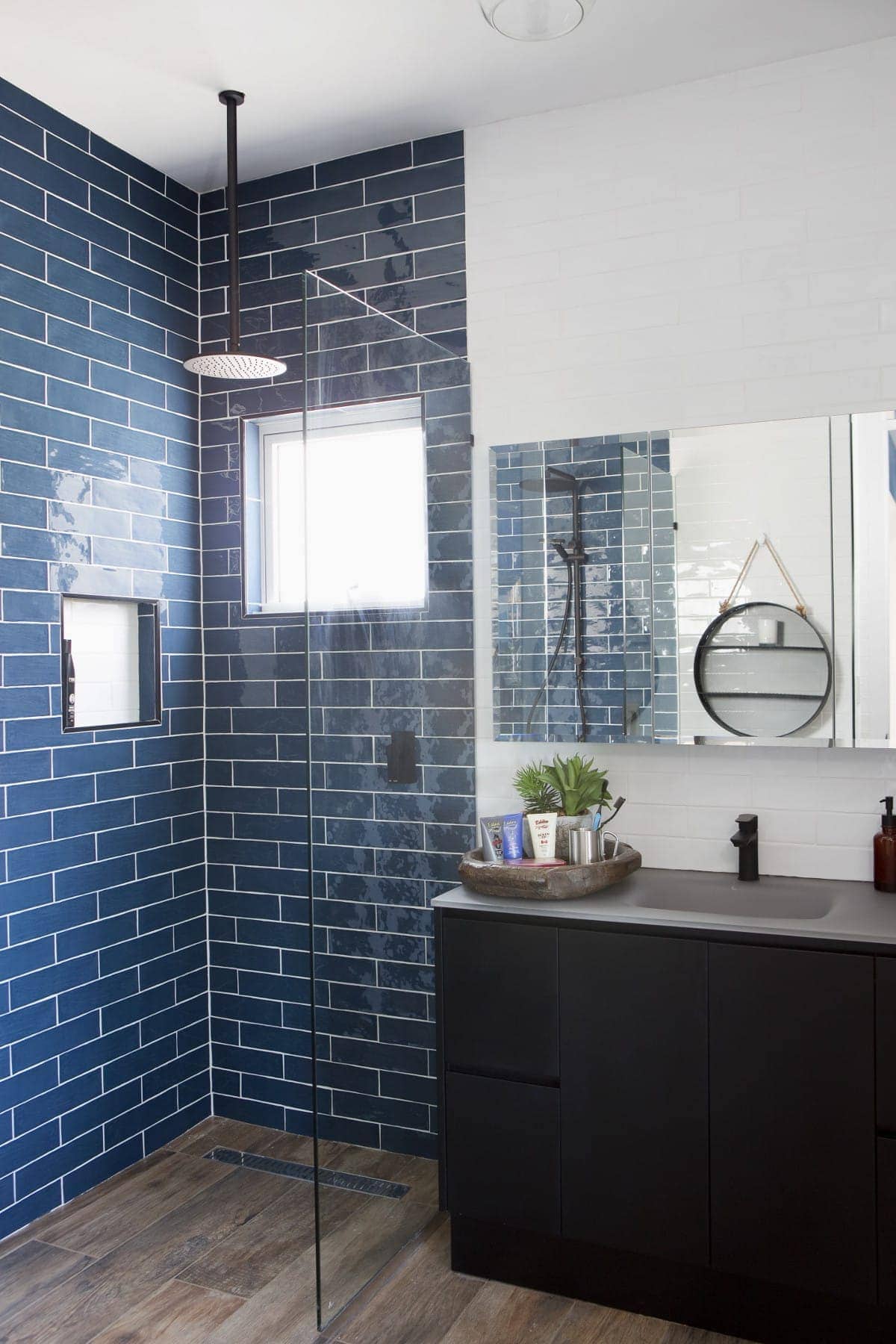 I don’t know where to start with the bedroom. I just can’t. God, are you there? Give me the strength I need to get through this recap!

Did the boys ask for ‘stripper room at the casino’ vibe for the home? They certainly got it in this bedroom. The only thing missing is a pole, smoke machine, and a drunk guy in a creepy bath robe. I think the less I say about this room the better.

If you want to see a bedroom that feels masculine and moody without being tacky, check this out.

The ensuite was the saving grace for Kim and Michelle. The tiles are amazing and I am hot for the vanity. I do not like the floor though. What’s that all about? The styling was a bit weird too.

I hope this show makes people realise that stylists and decorators do possess skills that the general public do not. Every time I see the reveals I always think how poorly resolved the spaces are – and it’s always the finishing touches. Styling is an art, people, and a lot of these teams don’t have a grip on it. 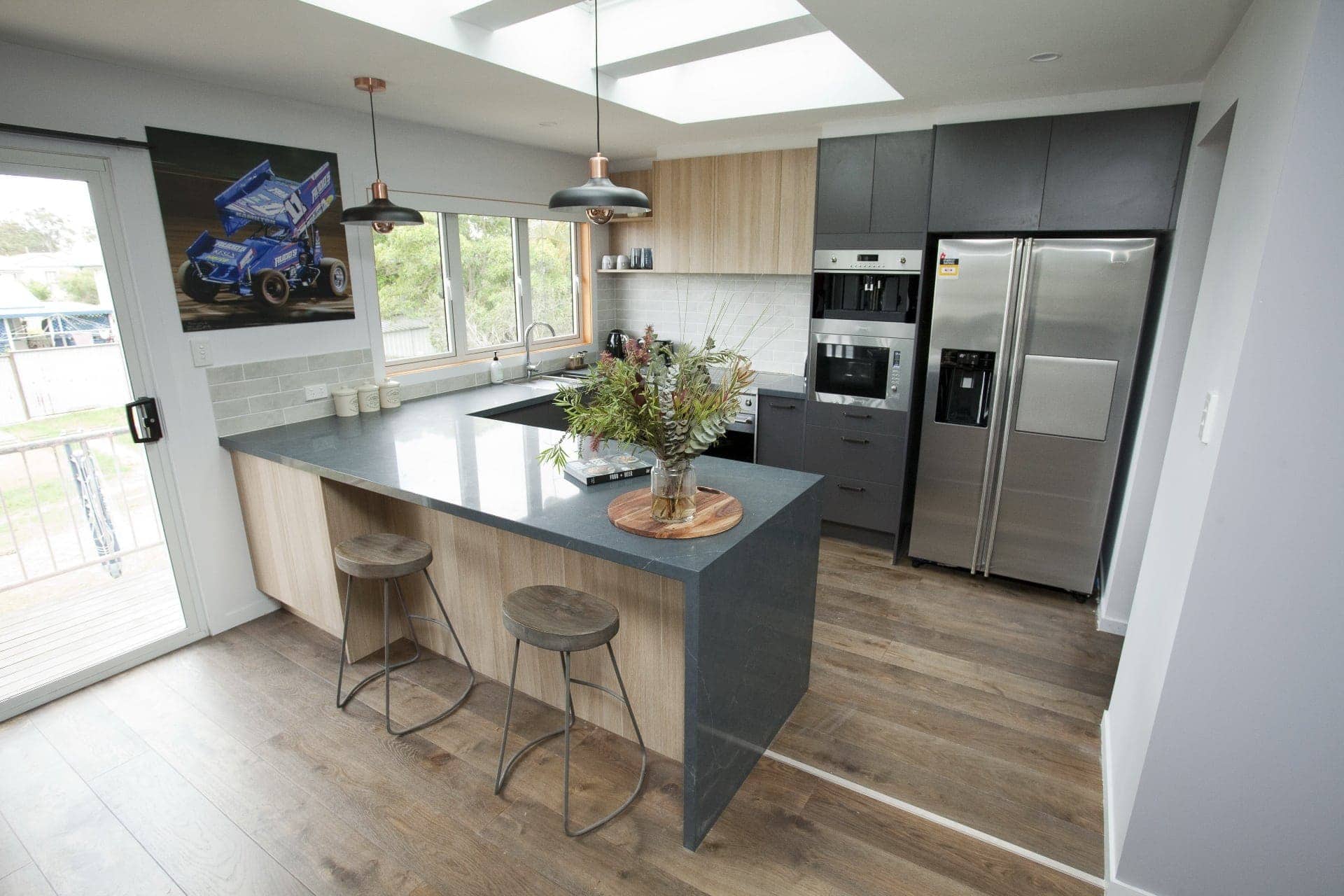 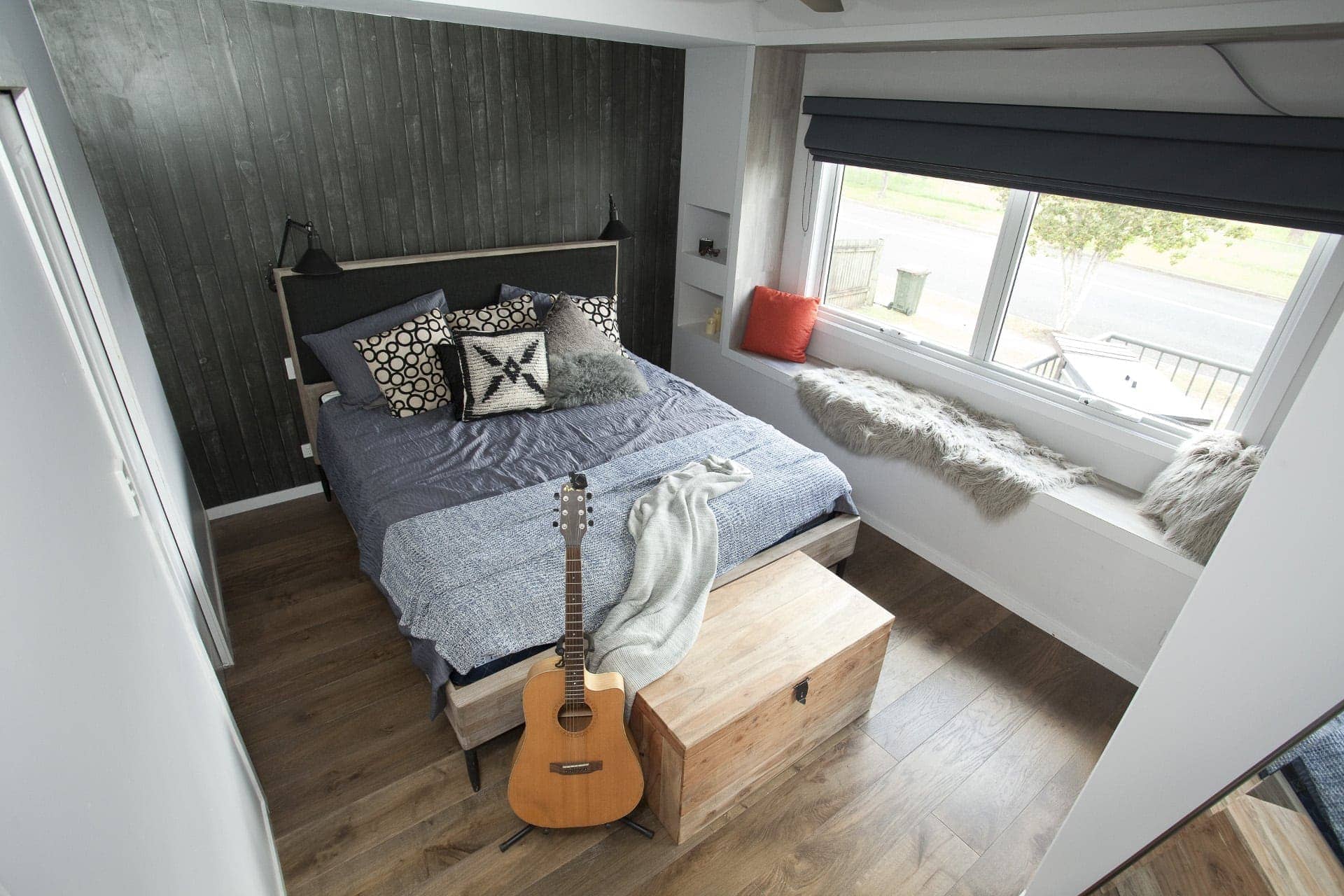 The judges are on some serious crack this week, because they were not impressed with the kitchen despite it being the home’s one keepable feature. I mean, of course, that horrendous ‘art’ has to come off the wall immediately and never see the light of day again. But outside of that it’s a beautiful room.

The colours were nice, the spacial planning was nice, the tiles were amazing and so were the pendants. Even the styling here was successful.

Wendy was not a fan of the grey benches and said that they didn’t answer the house rules. LLB even claimed that the kitchen was “like someone being really crazy and creative being given the wrong medication”.

Sorry gang, but you’re way off base here and I’m more than happy to take your calls to talk you through it. No, really, call me; I want a gig judging the show!

When it came to the bedroom, I have another question. Was one of the house rules to please not include bedside tables in one of the rooms? What’s that all about? The space looks like a ‘before’ photo, and the bed looks like it was made by a teenage boy (sorry teenage boys!).

The guitars are doing my head in. 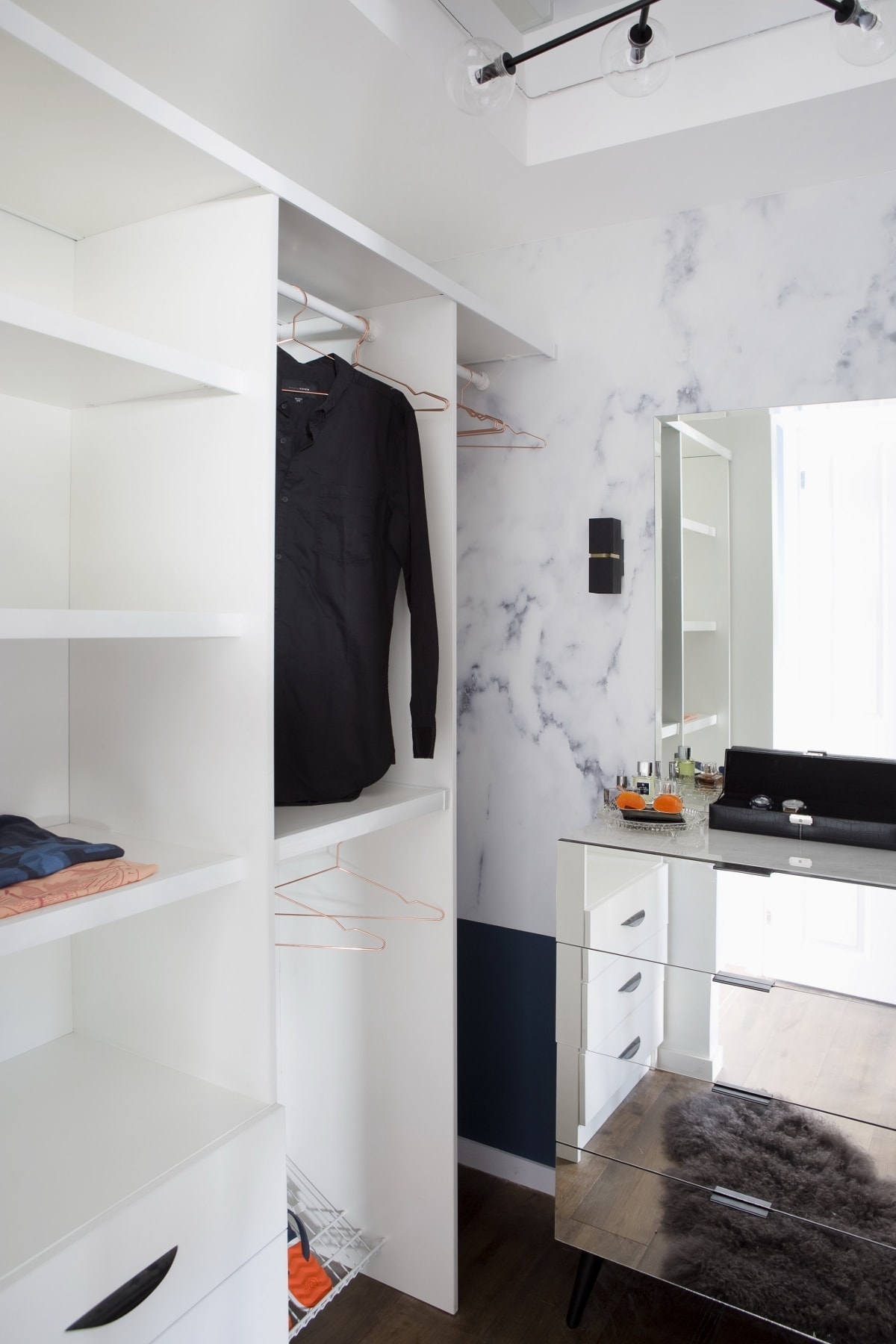 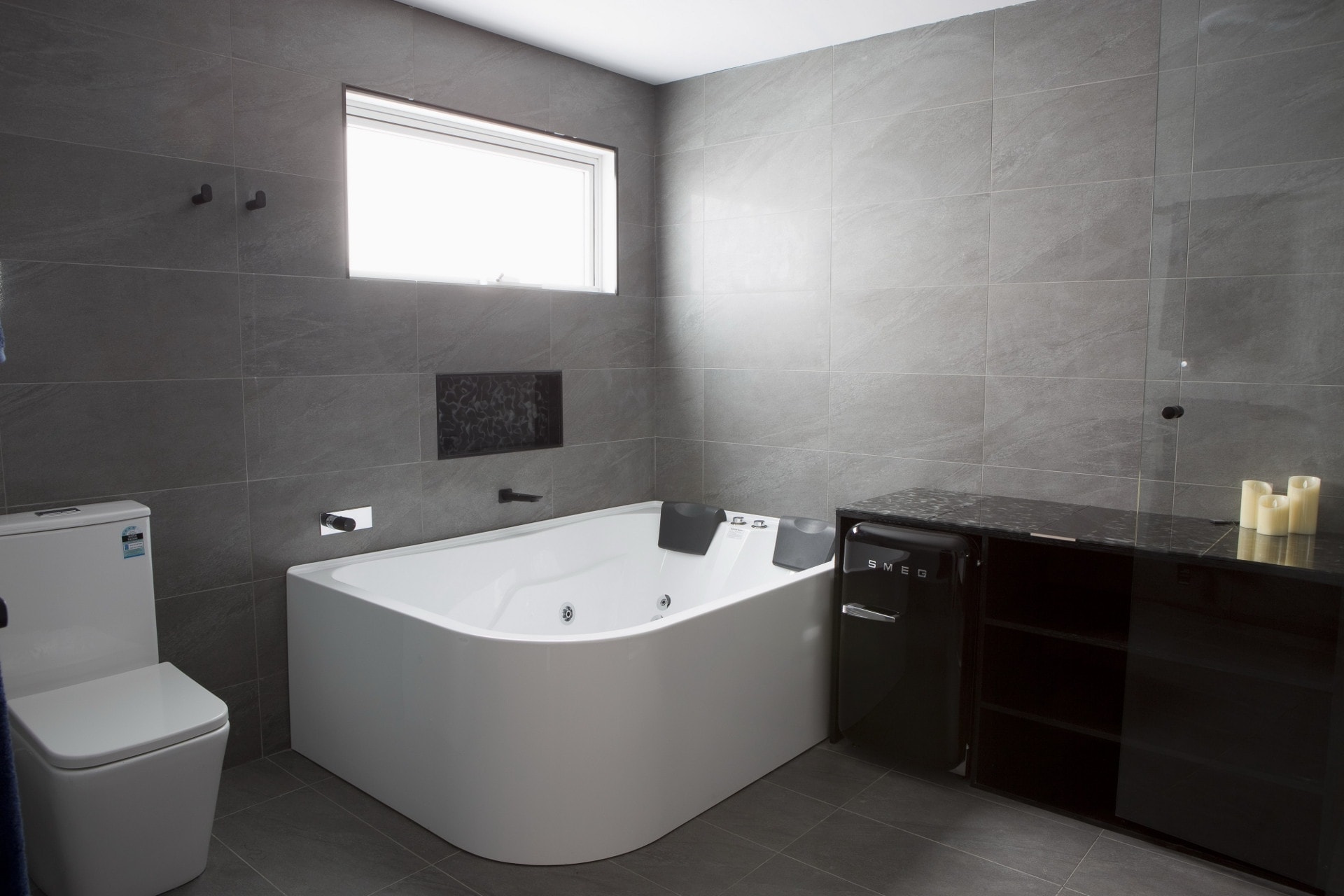 God I must sound like such a downer this week. But truly, so many of these rooms are just horrible and it has to be called out.

The judges loved the walk in robe from Chiara and David, specifically the mirror on the ceiling. Wendy liked the functional aspect of the light, while LLB was impressed by the combination of practicality and design. I must be living in a parallel universe because this space felt mediocre to me and I feel very confused as to how a mirrored chest of drawers fits into a man pad stylistically.

The main bathroom. Can we talk about it? I don’t know if I can, actually. I’m just exhausted by all of these terrible design decisions. The bathroom looks cheap. I hate to use the term ‘bogan’ but it is.

From the horrible feature tiles, to the double bath with head rests, right beside a fridge so you can knock back a tinny while you’re on the toilet. The whole thing is just gross and I can’t even.

Chiara and David came out on top this week. I am officially going bonkers.

I need to know what you thought this week!

What did you think of the House Rules 2018 Josh and Brandon reveal? I need to know if the judges are insane, or if I am.

Drop me a comment below and let me know if you agree or disagree with anything said above. It’d be great to know which rooms you thought were a success and which you want to never see again.